There’s more to life than F1 for Daniel Ricciardo… 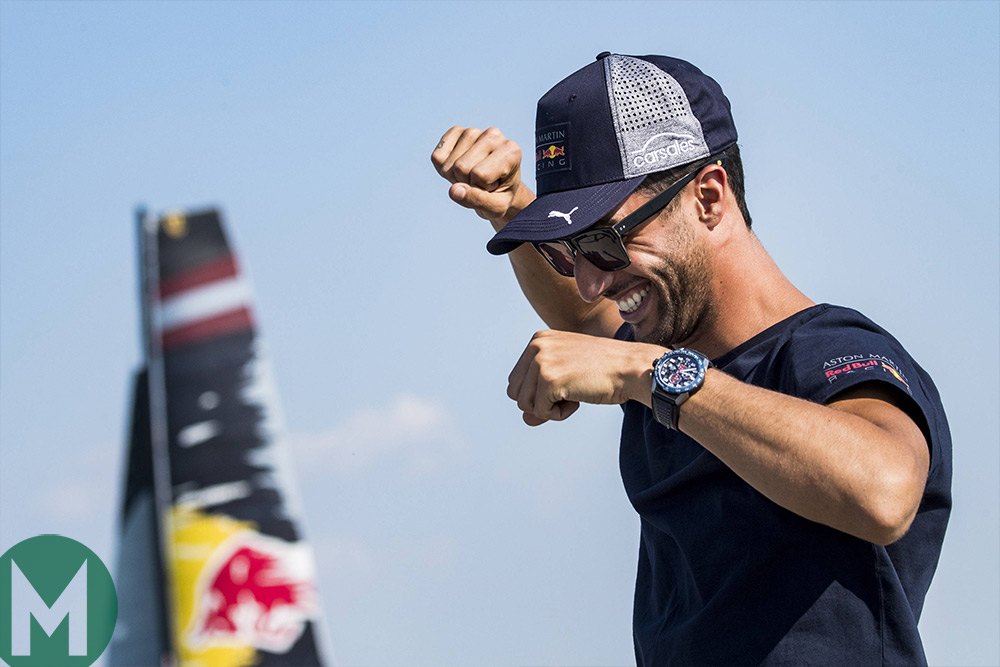 “Patches O-Houlihan!” beams Daniel Ricciardo, bounding into the room, quoting from Dodgeball and spying a board of cookies.

Interviewing Red Bull’s grinning Aussie is never predictable; he throws a wrench into any script.

The off-track demeanour seems a complete contrast to the blistering-yet-controlled speed Ricciardo has shown in recent years. Having finished third in the world championship twice since the dawn of F1’s turbo-hybrid era, Ricciardo has firmly marked himself out as Red Bull’s team leader and most consistent asset.

And with the Australian close to announcing what will almost undoubtedly be an extension to his current Red Bull deal, the stress and speculation over his future in the sport has dulled, allowing other, less sporting, matters to come to the fore.

Unlike some, Ricciardo isn’t the product of the traditional F1 driver manufacturing process. He hasn’t been groomed for F1 since birth, moulded into becoming a clinical driving machine; he’s quite the opposite, and it’s hugely refreshing. That goes some way to explaining his endearing approach to PR.

If I could make all these choices again, I probably wouldn’t be an F1 driver

“These [media interviews] are probably the worst thing about F1, in my opinion,” he says, smiling. “The problem with F1 is that you just don’t do enough driving. We do about 21 races, but about 5000 interviews.

“I didn’t sign up to be a TV personality, I signed up to be a racing driver, but one thing facilitates the other and you live with it. But if we had more races, and more races meant less shit, then I’d be well up for a calendar extension.”

He doesn’t seek out to offend, grinning while he delivers an eloquent slight against the media-focused circus that is modern F1. Ricciardo is immensely aware that life is bigger than F1 alone, and, with a little digging, it becomes clear that he has broader horizons than Grand Prix racing alone.

“Part of the reason that I’ll stop [F1] when I do will probably be to do all these little real-life things that we miss, and I want to do them before it gets too late in life,” he says when asked about F1’s packed calendar.

“Currently, I think the calendar is really bad,” he adds. “Logistically it could be way better, and not have us on one side of the world one week and the total opposite the next. If they arranged it to keep races closer together we could spend more time in that certain part of the world, which is something I really, really want to do. I also think it would keep drivers in the sport for longer.

“We don’t get to spend any time in a country or city really. We see a hotel, racetrack, hotel, plane… and that’s it. As a kid I’ve always wanted to do cool things like a road trip through America, visit the Grand Canyon and see the Daytona 500 with some mates. Or just go to little unknown towns and go watch some dude play a banjo to, like, a crowd of 10 people… real-life things like that.

“So often we’re in these places but we never get to see them properly.”

Regardless of his sense of wanderlust, Ricciardo still loves what he does, and believes some of his rivals should take a bit more pleasure from Grand Prix racing.

“I get a bit upset when I see some guys not enjoying being an F1 driver,” he adds. “I have bad days, days when I get totally fed up with the sport. If I could make all these choices again, I probably wouldn’t be an F1 driver as there are so many frustrating variables involved with it.

“But, at the same time, I do love my job, and nothing’s perfect. We still get to travel and race the fastest cars ever. Then I see some drivers in interviews and I just think ‘for God’s sake just smile… even if it’s fake, just do it!”

Ricciardo’s route into F1 followed a traditional path through the junior ranks. He started karting aged nine, moving up to Formula Ford in his native Australia before racing in Formula BMW Asia and Formula Renault in Europe.

His talents attracted Red Bull, which added him to its Junior Team roster in 2008, and supported him as he rose through the ranks. A year later he dominated the British Formula 3 Championship.

But perhaps Ricciardo’s most character-building season came right at the beginning of his career, and involved a 15-year-old Van Diemen.

“I had this purple and yellow Van Diemen RF89, it was horrible to look at in those colours but it taught me loads,” he says. “It was the first time I had to heel-and-toe and God I was terrible! I understood the concept, but I used to crunch gears like mad – just getting the cogs in was like a win!

“I used to lose all my lap time shifting gears, and the car used to slide all over the place. I never hated Formula Ford because it was what I had to learn in. But I do remember the first time I jumped into the BMW or Renault, stuff with wings and sequential gearboxes, and thinking ‘yeah, this is more me!’

“I never really clicked with the Formula Ford. When I got into the realms of downforce, where you could just bang a gear in and accelerate through a corner, that was what really hooked me on this sport.”

So, for a reasonably well-heeled kid from Perth, how big was the culture shock when he did finally make it into F1?

It’s not ‘screw you, we’re signing with someone else’, and it gives me a lot of confidence

“I remember when I was reserve driver for Toro Rosso [in 2011] and Sebastian [Vettel] was starting to assert his dominance on the field. I’d watch his onboards and be a bit overwhelmed, thinking ‘Oh man… this is quick! That looks special, can I really do that?’.

“But I believed in myself and now I watch onboards and realise they weren’t as unobtainable as I thought. I was watching Seb’s lap from Albert Park in 2010 and I remember the first time I thought I could improve on it, that I’d have taken that corner differently. That made me think ‘Yeah, I can run with these boys’. I went to bed quite angry that night, mostly because I felt ready right there and then.”

Of course, Ricciardo finally got his chance in mid-2011 when he was placed with the HRT team, later moving to Toro Rosso for 2012 and, eventually, Red Bull in 2014. Since then, he’s taken seven Grand Prix wins and two pole positions.

But with Red Bull choosing Honda power from the 2019 season, will Ricciardo be able to build on his solid record?

“The Renault [partnership] has just naturally fallen apart, and regardless of whether Honda is a clear step forward or not, I think the team will benefit from the change,” he explains.

“It’s a new hope, because the Renault thing is broken now. The team are confident in what they’ve seen from Honda, and that gives me confidence. The deal hasn’t been signed on pure emotion. It’s not ‘screw you, we’re signing with someone else’, and it gives me a lot of confidence that all of this is being done right.”

He might be toeing the party line but there’s a chance, with Ricciardo more than anyone else on the grid, that he’s speaking completely candidly.