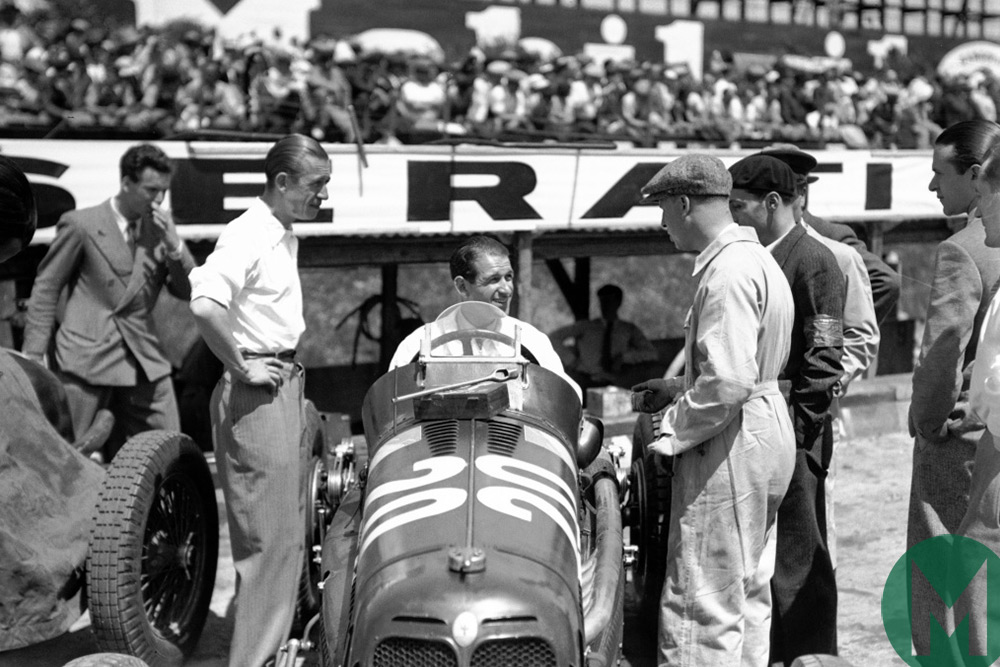 1906 French pre-war star Raymond Sommer was born. The son of a renowned aviator, Sommer began racing in 1928 and scored his breakthrough victory at Le Mans in 1932 after 20 hours behind the wheel due to Luigi Chinetti’s illness. Tazio Nuvolari shared his Alfa Romeo in the 1933 race and snatched victory from Chinetti on the last lap. In 1936, Sommer won the French Grand Prix (for sports cars) with a works Bugatti and Spa 24 Hours for Scuderia Ferrari and Alfa Romeo. He resumed his racing career after World War II and briefly led the 1950 Belgian GP. Awarded the Legion d’Honneur that year, Sommer was killed at Cadours a week after the final championship race of the season.

1985 Sports car racing was rocked by tragedy during the summer of 1985. Jonathan Palmer had been injured during practice for the Spa 1000 Kms but worse was to come during the race. Less than a month after Manfred Winkelhock had died after an accident at Mosport Park, World Endurance champion Stefan Bellof was killed when he crashed at Eau Rouge after 77 laps. Bob Wollek, Mauro Baldi and Riccardo Patrese won for Lancia, Rothmans Porsche clinched the Teams’ title and Gordon Spice/Ray Bellm were crowned as Group C2 Champions but it was another joyless weekend.

1994 Renault Formula 1 star Carlos Sainz jr was born. The son of a two-time World Rally champion and backed by Red Bull, Sainz Jr chose car racing for his sport. He graduated to Grand Prix racing as Max Verstappen’s Toro Rosso team-mate in 2015 and showed well against the highly-rated Dutchman, especially in qualifying. Two and a half seasons with Red Bull’s junior team included finishing fourth in the 2017 Singapore GP. He was transferred to Renault at that year’s United States GP but has now signed a long-term contract with McLaren from 2019.

1956 Juan Manuel Fangio was crowned world champion for the fourth time after Peter Collins relinquished his own title hopes by handing his Lancia-Ferrari to the Argentinian during the Italian GP. Stirling Moss won for Maserati despite running low on fuel due to a leak and having to be nudged to the pits for a top-up by Luigi Piotti’s 250F. Fangio’s Lancia-Ferrari retired after 18 laps but Collins, running second and still able to win the title himself, gave his car to Fangio who finished 5.7sec behind Moss.

1990 Mauro Baldi and Jean-Louis Schlesser led Jochen Mass and Heinz-Harald Frentzen in a Mercedes-Benz 1-2 at Donington Park to clinch the 1990 World Sports-Prototype Championship for Teams. Martin Brundle drove solo to third but that fine performance proved in vain when both Silk Cut Jaguars were disqualified due to a refueling infraction.

1935 Sir Malcolm Campbell became the first man to average more than 300mph for the Land Speed Record at Bonneville Flats. ‘Bluebird’ was timed at 304.33mph on the outward leg and then set 298.01mph on the return. That set a new world record for the Flying Mile at an average speed of 301.13mph.

1950 The inaugural World Championship was decided between Alfa Romeo team-mates Giuseppe Farina and Juan Manuel Fangio at Monza. Fangio entered the race with the points lead and qualified on pole position but retired with gearbox failure. He took Piero Taruffi’s car, which dropped a valve to end his hopes. Alberto Ascari’s new 4.5-litre Ferrari had led only to retire and Farina eased to victory to clinch the title. Ascari took over Dorino Serafini’s car to finish second.

1960 The Italian Grand Prix saw the British teams boycott when the organisers insisted that Monza’s full road course and oval was used. That left the way for a Ferrari 1-2-3-5 with Phil Hill winning for the first time. It was the last victory for a front-engine car in a World Championship GP. Richie Ginther and Willy Mairesse completed the podium positions, with Wolfgang von Trips fifth in a 1.5-litre Formula 2 car.

1960 Pat Moss and Anne Wisdom’s 3-litre Austin-Healey survived thunderstorms and treacherous roads to win the demanding Liège-Rome-Liège Rally. Only 13 of the 80 starters completed the 3,000-mile event with team-mates David Seigle-Morris/Vic Elford and John Gott/Rupert Jones contributing to the team prize.

1966 Jack Brabham may not have finished the Italian Grand Prix but John Surtees’s retirement confirmed the Australian’s third world title – the first for a driver in a car baring his own name. This was a typical Monza slipstreamer but Ferrari’s Ludovico Scarfiotti, on only his fourth GP start, broke clear as the pace took its toll on his rivals. Scarfiotti eventually beat team-mate Michael Parkes by 5.8sec with Denny Hulme’s Brabham-Repco third. 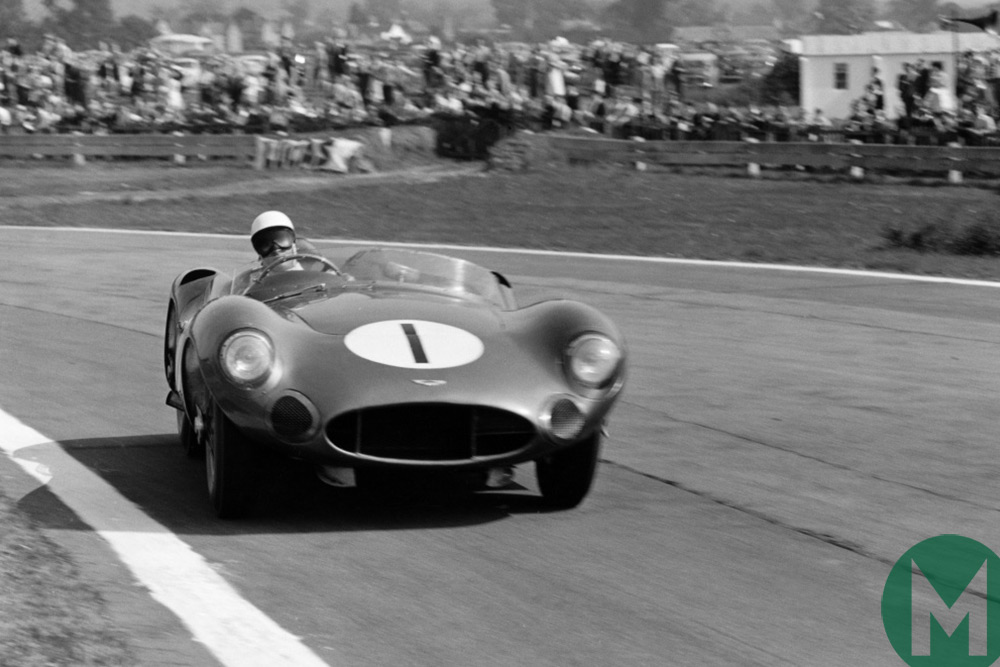 1939 Swiss Formula 1 star and 1970 Formula 2 champion Clay Regazzoni was born. He joined Ferrari and made his F1 debut at the 1970 Dutch Grand Prix. Victory at Monza in his fifth-ever GP helped ‘Regga’ clinch third in the standings despite his late start to the campaign. Two disappointing campaigns followed and he raced for BRM in 1973. He qualified on pole in Argentina but was lucky to survive a fiery accident at Kyalami. Both Regazzoni and young BRM team-mate Niki Lauda moved to Ferrari in 1974. The consistent Regazzoni won in Germany and only lost the title at the final round. Another couple of victories followed in the next two seasons before Regazzoni moved on once more. Winner of the 1979 British GP for Williams, he was paralysed from the waist down when his Ensign crashed during the 1980 Long Beach GP. Clay Regazzoni died in a road accident in 2006.

1959 Goodwood hosted the fifth and final round of the World Sportscar Championship – the RAC Tourist Trophy. Aston Martin outpaced rivals Ferrari and Porsche in practice but fire eliminated the leading DBR1 of Stirling Moss and Roy Salvadori (above). Moss transferred to the second-placed sister car of Jack Fairman and Carroll Shelby. He passed Joakim Bonnier/Wolfgang von Trips’ Porsche in the final hour to win by a lap and clinch the title for Aston Martin. Tony Brooks just failed to take second for Ferrari at a dramatic finish to an outstanding race.

1970 Champion elect Jochen Rindt was killed at Monza on this day after crashing at Parabolica during final qualifying for the Italian Grand Prix. He had already amassed enough points to be confirmed as posthumous world champion at the end of the year. The Lotus team withdrew and it was Ferrari rookie Clay Regazzoni who won on the following day (September 6).

1971 Just 0.61sec covered the top six finishers of the Italian Grand Prix after another slipstreaming classic at Monza. BRM’s Peter Gethin just edged Ronnie Peterson’s March by 0.01sec thanks to a better exit from Parabolica with François Cevert (Tyrrell), Mike Hailwood (Surtees) and Howden Ganley (BRM) completing the blanket finish. It was the first time a World Championship GP had been completed at over 150mph and was the closest finish in history.

1938 John Hindmarsh was killed during a test flight of the Hurricane fighter plane. A career soldier before transferring to the RAF, Hindmarsh raced at Brooklands from 1929 and finished fourth in the following year’s Le Mans 24 Hours. Sharing Luís Fontes’ Lagonda in the 1935 race, they assumed the lead after 18 hours and held on to score an unexpected victory. Hindmarsh began working as a test pilot that year which included early tests of the Hurricane. It was on one such flight that he crashed near Brooklands in 1938.