Looking into the database for the news on this day 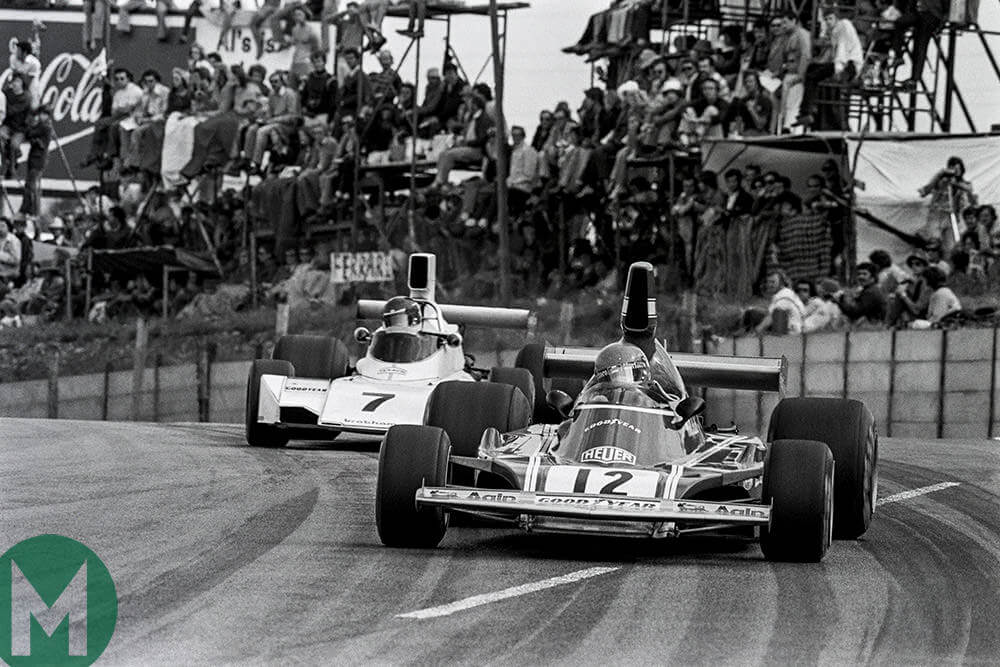 1948 Formula 3 driver and Grand Prix team owner Eddie Jordan was born in Dublin 70 years ago. He gave up his own racing career to establish his team in the junior categories which graduated to Formula 1 in 1991. A promising debut season included giving Michael Schumacher his debut in Belgium. Rubens Barrichello qualified on pole position at Spa-Francorchamps three years later and former champion Damon Hill led a famous Jordan 1-2 at the Belgian circuit in 1998. Heinz-Harald Frentzen won two races as he challenged for the 1999 world title before Jordan’s fortunes waned in the new millennium.

1980 Nelson Piquet dominated the Long Beach Grand Prix to convert pole position into his maiden victory.  Bruno Giacomelli caused a pile-up early in the race and then eliminated the second-placed Alan Jones while being lapped. Worse was to befall Clay Regazzoni who suffered spinal injuries when his Ensign’s brakes failed at the end of Shoreline Drive.

2008 Richard Lloyd and David Leslie were among those killed when their Cessna Citation 1 light plane crashed into a house in Farnborough, Kent. They had just taken off from Biggin Hill en route to a GT3 test at Nogaro.

2002 Michael Schumacher narrowly beat his brother to win the 2002 Brazilian Grand Prix for Ferrari. Ralf Schumacher’s Williams-BMW team-mate Juan Pablo Montoya qualified on pole position but made a poor start and wiped off his front wing against the back of Michel Schumacher’s Ferrari. Williams was late to react to Ferrari’s one-stop strategy and Ralf could not pass after closing on the leader. Last year’s winner David Coulthard finished third for McLaren and local hero Rubens Barrichello led for three laps before his hydraulics failed. 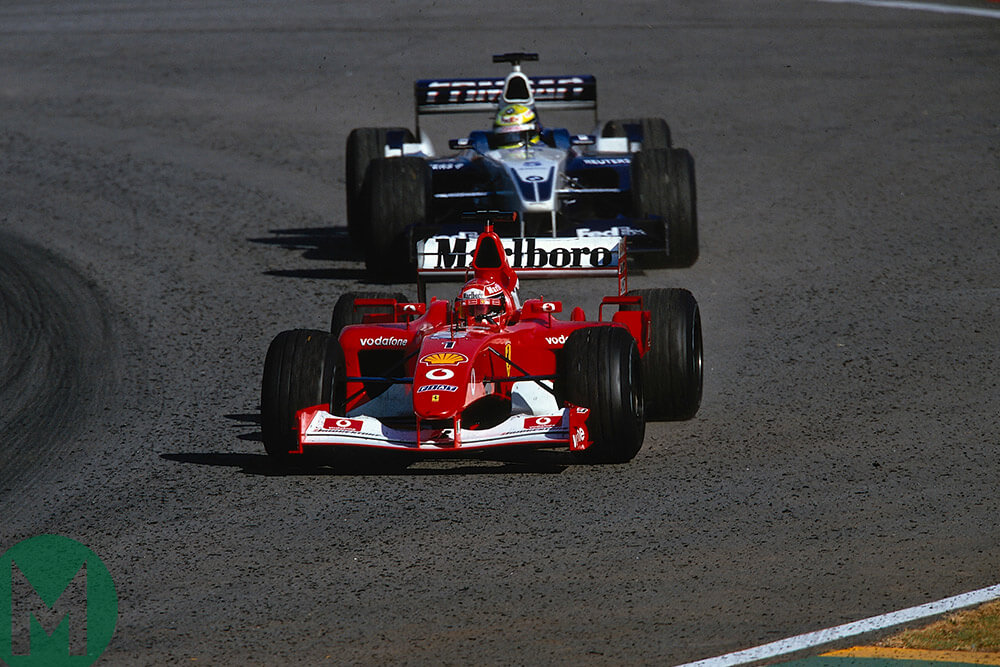 1976  AFN Porsche founder and two-time Le Mans starter H.J. “Aldy” Aldington died at the age of 73. He was instrumental in establishing Frazer-Nash during the 1930s and raced in both the 1936 French Grand Prix (a sports car race that year) and 1937 Le Mans 24 Hours. He finished third overall on his second visit to Le Mans in 1949 when sharing Norman Culpan’s newly acquired Frazer-Nash High Speed.

2001 Michael and Ralf Schumacher became the first brothers to start from the front row but the 2001 Brazilian Grand Prix was not their race. Ralf crashed into Rubens Barrichello and Michael was beaten into second by the McLaren-Mercedes of David Coulthard. Newcomer Juan Pablo Montoya forced his way past Michael at a restart and led for 36 laps before clashing with Jos Verstappen while lapping the Dutchman. New leader Coulthard changed to wets before re-passing Michael Schumacher into Turn 1 to restore his advantage.

1926 Motor Sport Hall of Fame inductee and triple World Champion Sir Jack Brabham was born in a Sydney suburb in 1926. He won back-to-back titles for Cooper in 1959 and 1960 before establishing his own marque in partnership with Ron Tauranac. New Formula 1 rules stipulated 3-litre engines for the 1966 season and Brabham turned to Repco for power. He won his first Grand Prix in six years on the way to a third title – the only time a driver has been crowned World Champion in a car bearing his name.  Brabham scored his 14th and final GP win at Kyalami in 1970 before selling the company and returning to Australia.

1978 Michelin-shod Ferraris dominated the 1978 Long Beach Grand Prix but contact while lapping a backmarker denied Gilles Villeneuve his breakthrough victory. Carlos Reutemann qualified on pole position as the scarlet cars locked out the front row and inherited the win when the French-Canadian tripped up (and over) Clay Regazzoni’s Shadow-Ford. Alan Jones starred in the Williams FW06-Ford and challenged for the lead before his fuel pump faltered. He set the fastest race lap to confirm the reconstituted team’s promise. Mario Andretti and Patrick Depailler completed the podium finishers for Lotus and Tyrrell respectively.

1977 Mario Andretti won the 1977 Long Beach Grand Prix to become the first American to win a Formula 1 race on home soil. Jody Scheckter’s Wolf made a great start from the second row and led Andretti and slow starting pole winner Niki Lauda for the first 76 laps before a slow puncture in the closing stages. He dropped to third in the last four laps with Andretti beating Lauda by just 0.773sec. Carlos Reutemann slid wide at the first corner of the race to trigger mayhem behind.

1988 Ayrton Senna and Alain Prost started their first race as team-mates at the beginning of McLaren’s dominant 1988 season. Senna qualified for the Brazilian Grand Prix in pole position but forced the start to be aborted due to a technical issue on his race car. He started from the pitlane in the spare and charged through to second before being disqualified for switching cars. Prost qualified third on the grid and led all-the-way to victory, beating Gerhard Berger’s Ferrari by 9.873sec. Nigel Mansell’s normally aspirated Williams-Judd qualified on the front row but retired after 18 laps. 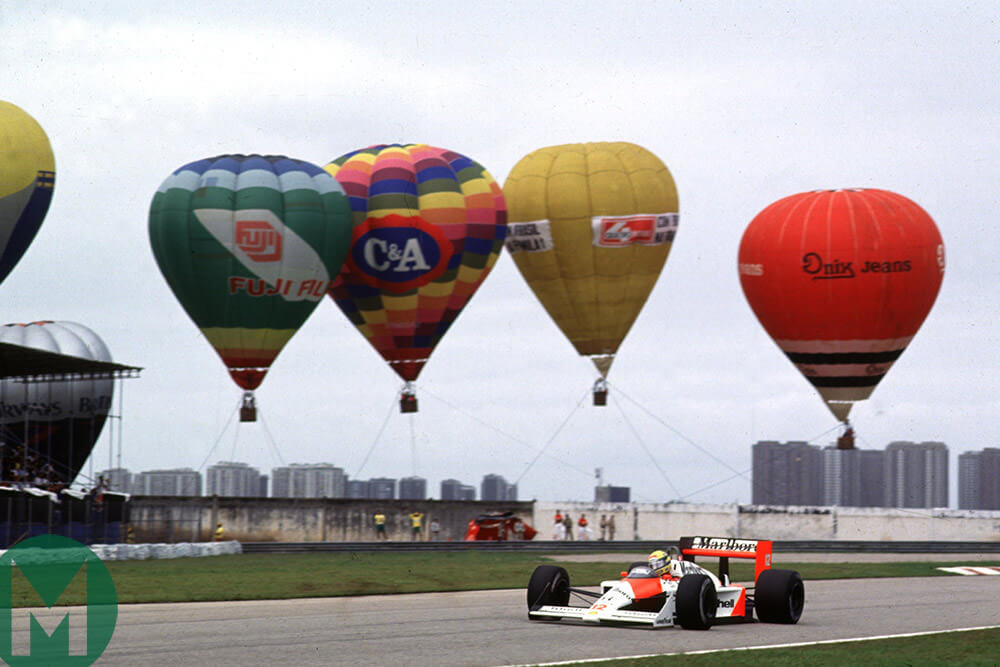 1993 It has been 25 years since Nigel Mansell’s fiery crash during practice for the Valvoline 200 at Phoenix – his first oval appearance after switching from Formula 1 to the IndyCar World Series. He was prevented for starting the following day’s race but Mansell proved adept in this form of racing. He finished third at Indianapolis and won the other four oval races (Milwaukee, Michigan, New Hampshire and Nazareth) on the way to the title.April 4

1940 Former Grand Prix driver and sports car race winner Richard Attwood celebrates his 78th birthday. He finished second in the 1968 Monaco Grand Prix for BRM but it is victory in the Le Mans 24 Hours two years later for which Attwood is best known. That was sharing a works Porsche 917K with Hans Herrmann in the year that Steve McQueen filmed the movie Le Mans.

1982 Niki Lauda’s McLaren-Ford won the 1982 Long Beach Grand Prix in just his third race after coming out of retirement. Alfa Romeo’s Andrea de Cesaris started from a surprise pole position and led the opening 14 laps before being passed by the former champion. Keke Rosberg finished second with Gilles Villeneuve originally third. His turbocharged Ferrari was fitted with two rear wings and was eventually disqualified.

2009  Jenson Button scored his second victory for Brawn Grand Prix as torrential rain swept Malaysia’s Sepang circuit. The Englishman qualified on pole position but it was the fourth-placed Williams-Toyota of Nico Rosberg that made the best start to lead. Third in the early laps, Button jumped both Rosberg and Jarno Trulli’s Toyota in the pitstops before a thunderstorm drenched the circuit and forced the race to be stopped after 32 laps. Cars and drivers then waited on the grid for an hour before the result was declared with half points awarded for the first time since 1991. The one-stopping Nick Heidfeld scored a lucky second-place finish and Timo Glock was third thanks to judicious use of intermediate tyres during the downpour.