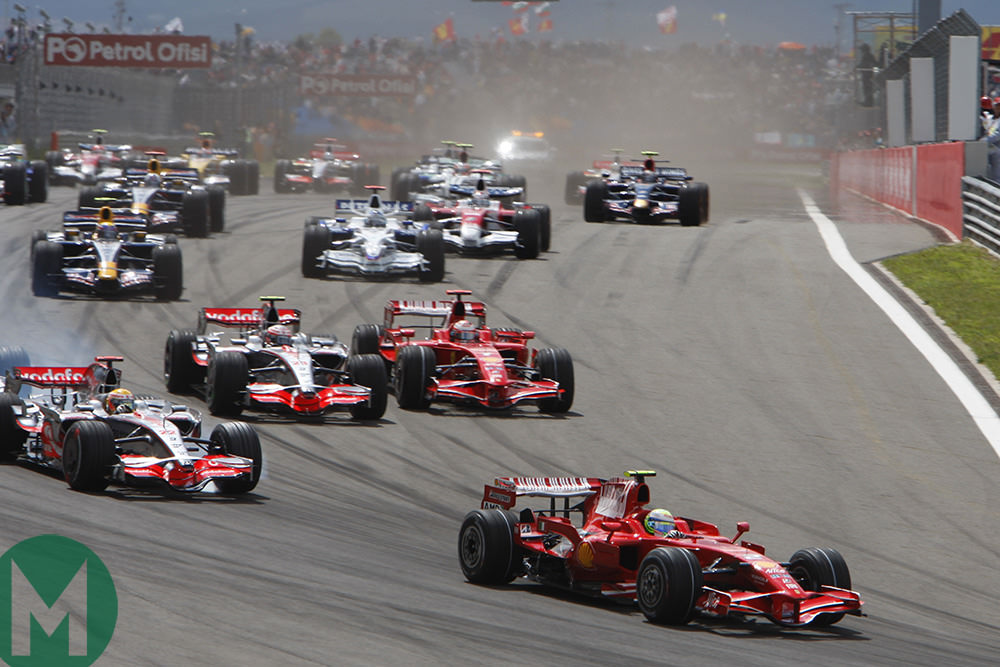 1940  Swiss amateur sports car driver Herbert Müller was born. Early success came driving a Porsche in the European Hillclimb Championship, winning the GT class in 1963 and 1965. He joined Georges Filipinetti’s privateer sports car team and shared the winning Porsche 906 in the 1966 Targa Florio with Willy Mairesse. By now entering his own cars, Müller was second at Le Mans in 1971 a month before Pedro Rodríguez was killed during an Interserie race at the Norisring when driving a Herbert Müller Racing Ferrari 512M. Müller re-joined Porsche in 1973 and won the Targa Florio and finished second at Le Mans, sharing with Gijs van Lennep on both occasions. He was semi-retired as a driver when he was killed during the 1981 Nürburgring 1000Kms.

1922  Roy Salvadori was born to Italian parents in Essex. Salvadori’s highest-profile victory came in the 1959 Le Mans 24 Hours when he shared the winning Aston Martin DBR1/300 with Carroll Shelby. He started 47 Grands Prix for the likes of Connaught, BRM, Vanwall, Cooper and Aston Martin with second in the 1958 German GP his best result. He died in Monaco in 2012.

1957  Piero Taruffi finally won the Mille Miglia in 1957 but the race was overshadowed by the terrible accident that cost the lives of Alfonso de Portago, navigator Edmund Nelson and 11 spectators. The Spanish nobleman crashed at approximately 150mph after a suspected puncture and the tragedy led to Italy’s famous road races being banned in unrestricted form.

1950  An estimated 150,000 spectators witnessed the opening round of the new Formula 1 World Championship at Silverstone in 1950. Alfa Romeo dominated with polesitter Giuseppe Farina leading Luigi Fagioli and Reg Parnell, who hit a hare during the race, in a famous 1-2-3 for the marque. Juan Manuel Fangio retired the other Alfetta and Yves Giraud-Cabantous’s fourth-placed Lago-Talbot was a full two laps in arrears by the finish.

1960  The United States’ first Grand Prix driver Harry Schell was killed on Friday the 13th during practice for the International Trophy at Silverstone. Raised in France and of dual nationality, Schell had started 56 GPs during his 10 years in the World Championship. His BRM finished second in the 1958 Dutch GP and Schell was fifth-equal in that year’s standings. He won the 1956 Nürburgring 1000Kms when the works Maserati 300S he shared with Piero Taruffi was taken over by Stirling Moss and Jean Behra after their sister car retired.

2012  Pastor Maldonado (below) scored a surprise victory for Williams in the 2012 Spanish Grand Prix at Catalunya. The erratic Venezuelan inherited pole position when Lewis Hamilton was excluded after he ran out of fuel, moments after lapping 0.578sec quicker than anyone else. Maldonado remained in contention throughout the race and nursed his tyres to the finish despite the close attention of Fernando Alonso’s Ferrari during the closing laps. A joyous day for Williams – its first victory since 2004 – was soured as a fire broke out in its garage shortly after the celebratory group photo had been taken and 16 people were injured. 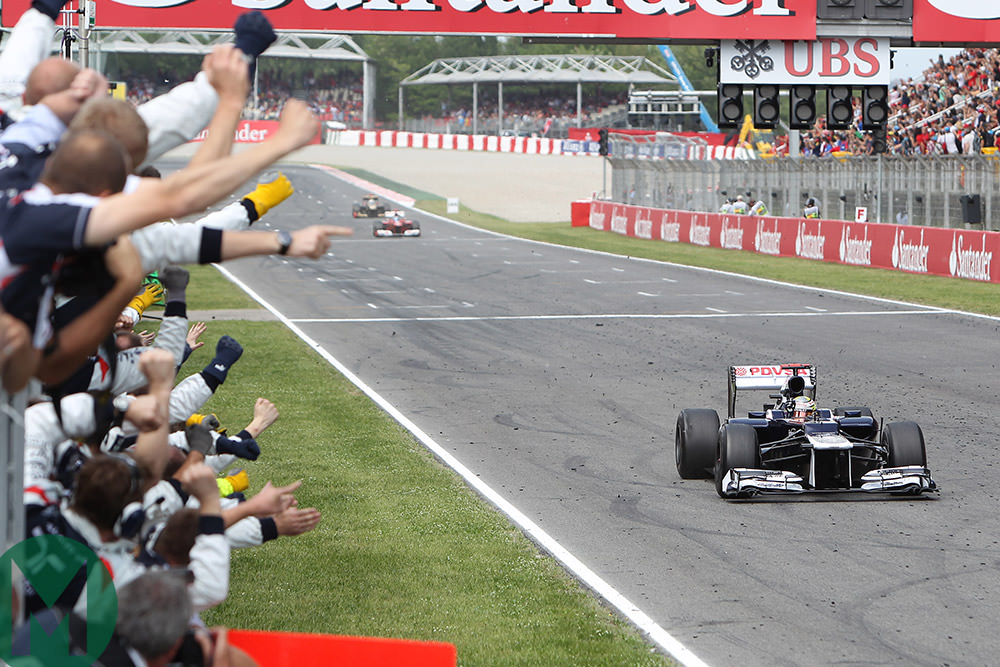 1872  Automotive pioneer and early racing driver Marcel Renault was born in Paris. Brothers Marcel and Louis established Automobiles Renault in 1899 and both raced to generate publicity for their new marque. Marcel won the most important race of 1902 when his Renault 16hp averaged 38mph in the race from Paris to Vienna. But he was one of those to be killed during the following year’s tragic Paris-Madrid event that led to city-to-city races being abandoned.

1961  Ferrari began the 1961 Formula 1 season with a distinct power advantage but Stirling Moss qualified Rob Walker’s nimble Lotus 18-Climax on pole position in Monaco. Richie Ginther’s shark-nose Ferrari 156 led the opening 13 laps before Moss, winner of the 1960 GP, closed in and took the lead. Moss then held off the three pursuing Ferraris for the remaining 87 laps to score a famous and unexpected victory by 3.6sec.

1972  The 1972 Monaco Grand Prix is one of the wettest Formula 1 races on record and it provided Jean-Pierre Beltoise with a famous victory. He qualified his BRM P160B on the second row, took the lead at the start and eased away to the only GP victory of his career. He finished over half a minute ahead of renowned rain master Jacky Ickx in the leading Ferrari, with the rest of the field lapped. It was BRM’s final GP victory.

1938  Mercedes-Benz rebounded to its shock defeat at Pau in fine style at the 1938 Tripoli Grand Prix. Helped by Auto Union’s absence, the three silver W154s were quickest in qualifying but it was Giuseppe Farina (Alfa Romeo) and Achille Varzi (Maserati) who led at the start. The Italian cars were no match for Mercedes and Hermann Lang, Manfred von Brauchitsch and Rudolf Caracciola cruised to a dominant 1-2-3. It was a tragic event however, for both Eugenio Siena and Laszlo Hartmann were killed in separate accidents.

1983  Keke Rosberg scored the second win of his Formula 1 career 35 years ago today. He started the Monaco Grand Prix with dry tyres on his Williams-Ford and masterfully managed the opening laps on the damp circuit. He passed Alain Prost’s wet-shod McLaren into Ste Devote on lap two and pulled away from the field. Gearbox failure on Jacques Laffite’s sister car prevented a Williams 1-2 with Nelson Piquet and Prost completing the podium positions.

1986  Elio de Angelis was killed at 28 while testing a Brabham-BMW at Paul Ricard. He made his Formula 1 debut for Shadow in 1979 before spending the next six seasons driving for Lotus. Those years included victories in the 1982 Austrian Grand Prix (beating Keke Rosberg by just 0.05sec) and 1985 San Marino GP (after Alain Prost had been disqualified). The urbane de Angelis finished third in the 1984 World Championship.

1988  McLaren-Honda dominated the 1988 World Championship and Ayrton Senna was in a class of his own during practice and the first 66 laps at Monaco. He qualified on pole position by 1.427sec and established a lead of almost a minute as team-mate Alain Prost (below) remained stuck behind Gerhard Berger’s slower Ferrari. Prost took second on lap 54 but Senna was still 53 seconds ahead when he crashed at Le Portier, handing victory to his French rival. 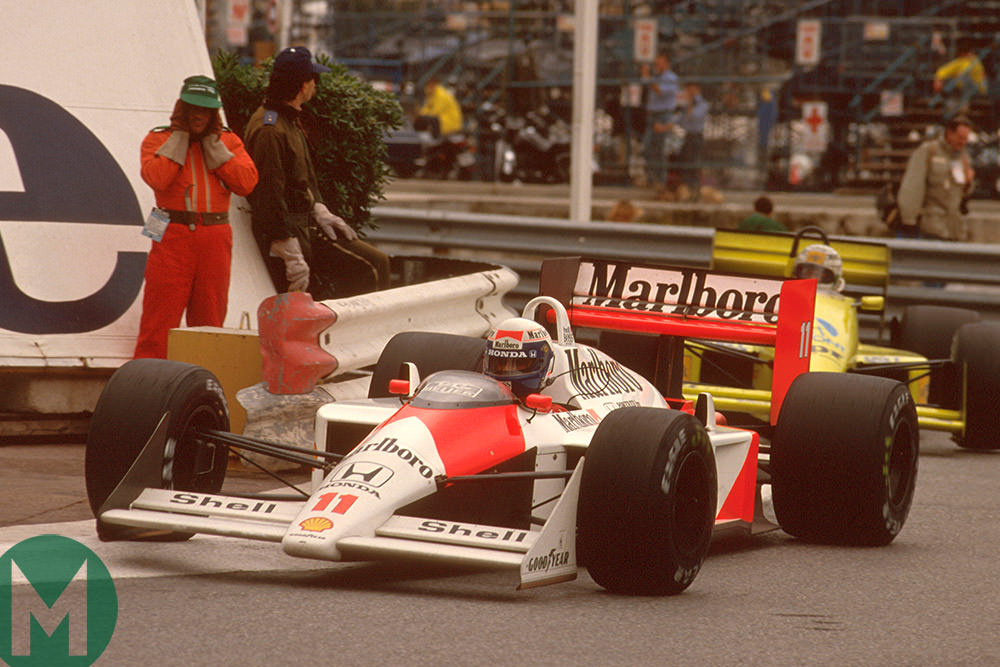 1909  Italian Grand Prix star Luigi Villoresi was born in Modena. The older of two racing brothers, he was named Italian Voiturette Champion in 1938, a year before younger sibling Emilio was killed while testing at Monza. The silver-haired Luigi returned to Grand Prix racing after World War II and won the first British GP to be held at Silverstone in 1948. He drove for Ferrari for the first four seasons of the new World Championship – finishing second behind team-mate Alberto Ascari in Argentina and Belgium during 1953. He broke his leg while driving a private Maserati at Castelfusano in 1956 and finally bowed to family pressure to retire.

1981  The 1981 Belgian Grand Prix weekend was marred by two serious accidents. Osella mechanic Giovanni Amadeo fell onto the track off the pitwall and was hit by Carlos Reutemann’s Williams on Friday. He died from his head injuries three days later. Arrows mechanic Dave Luckett was on the grid trying to restart Riccardo Patrese’s engine when the race started and he was lucky not to be killed when hit by Siegfried Stohr’s sister car. The race was restarted but it was a relief when rain brought the event to a premature end, with Reutemann declared the winner.

1987  Nigel Mansell had dominated qualifying for the Belgian Grand Prix but it was his high-speed accident with Ayrton Senna that caused Monday’s headlines. He stormed into the Lotus pit to confront the Brazilian, with the intervention of mechanics preventing the incident from escalating. Alain Prost scored his 27th GP win to equal Jackie Stewart’s record with Stefan Johansson completing a 1-2 for McLaren-TAG. The race had been stopped by Philippe Streiff’s heavy accident at Eau Rouge that eliminated Tyrrell team-mate Jonathan Palmer.

1992  Nigel Mansell became the first driver to win the opening five races in a Formula 1 season when he led a Williams 1-2 at Imola. He beat team-mate Riccardo Patrese to pole by over a second and then beat the Italian every lap of the way. Michael Schumacher spun when attempting to take fifth from Benetton team-mate Martin Brundle. The Briton finished fourth when Jean Alesi and Gerhard Berger crashed into each other on lap 40.