This week’s major milestones from the Archive and Database 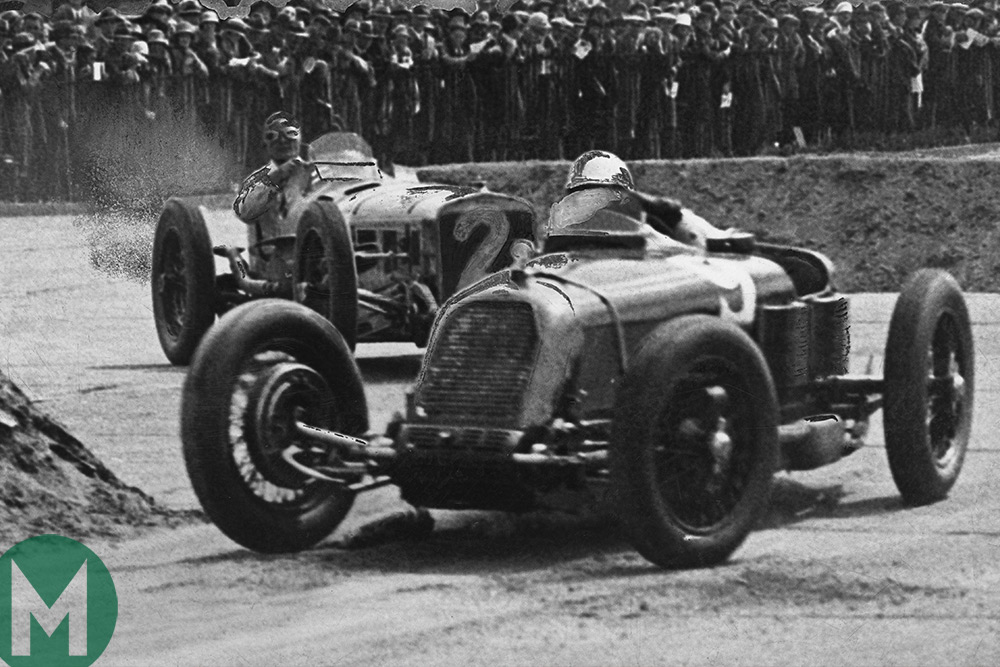 1953 Double Indianapolis 500 winner Arie Luyendyk is born. The son of Jaap Luyendyk, who raced with some success in South Africa, Arie made his name by winning the inaugural European Super Vee title in 1977. Luyendyk switched his attention to North America during the early 1980s, making his Champ Car debut during 1984 and winning the following year’s Rookie of the Year title. A move to Shierson Racing in 1990 was rewarded with a maiden victory – in the most prestigious race of all, as Luyendyk beat Bobby Rahal at Indianapolis. He won a couple of races for Vince Granatelli during 1991 before defecting to the Indy Racing League in 1996. Victory in the 1997 Indy 500 was one of his four victories in that series.

1896 Grand Prix star and Land Speed Record holder Sir Henry Segrave is born in Baltimore. His family settled in England during World War I and Segrave began racing at Brooklands once peace was restored to Europe. He joined Sunbeam in 1921 and became the first British driver to win a continental GP when his Sunbeam won the French GP two years later. Winner of the 1924 San Sebastian GP, he set a new Land Speed Record on Southport Sands in 1926. He was killed on Friday 13 June 1930 having just set a new Water Speed Record on Lake Windermere.

1991 Williams-Renault wins the Portuguese Grand Prix, but this time Riccardo Patrese prevails. The Italian qualified on pole position but let Nigel Mansell through to help his team-mate’s title challenge. However, it all went wrong for Mansell in the tyre stops. The Englishman’s right rear wheel was not fitted correctly and it rolled away as he left his pit. His mechanics re-secured the errant wheel but Mansell was finally black flagged after 51 laps. Patrese beat championship leader Ayrton Senna by 20.941sec to score the fifth victory of his F1 career.

1973 A safety car (a Porsche 911) is used during a Grand Prix for the first time on a chaotic day. The Canadian Grand Prix was held at a wet but drying Mosport Park and the conditions and numerous pitstops created a scoring nightmare. The pace car was deployed after Jody Scheckter and François Cevert crashed on lap 33 but it only added to the confusion by picking up the wrong car as the leader. McLaren’s Peter Revson was declared the winner after three hours of deliberation.

1990 The World Sports-Prototype Championship visits Montréal’s Circuit Gilles Villeneuve for the only time. Jean-Louis Schlesser and Mauro Baldi scored their fourth successive victory for Sauber-Mercedes to clinch the title but the race was more notable for Jesús Pareja’s horrific accident. A dislodged manhole cover ruptured his Porsche 962’s fuel tank and the car burst into flames when Pareja crashed as a consequence. The Spaniard escaped with light facial burns but the race was red flagged. 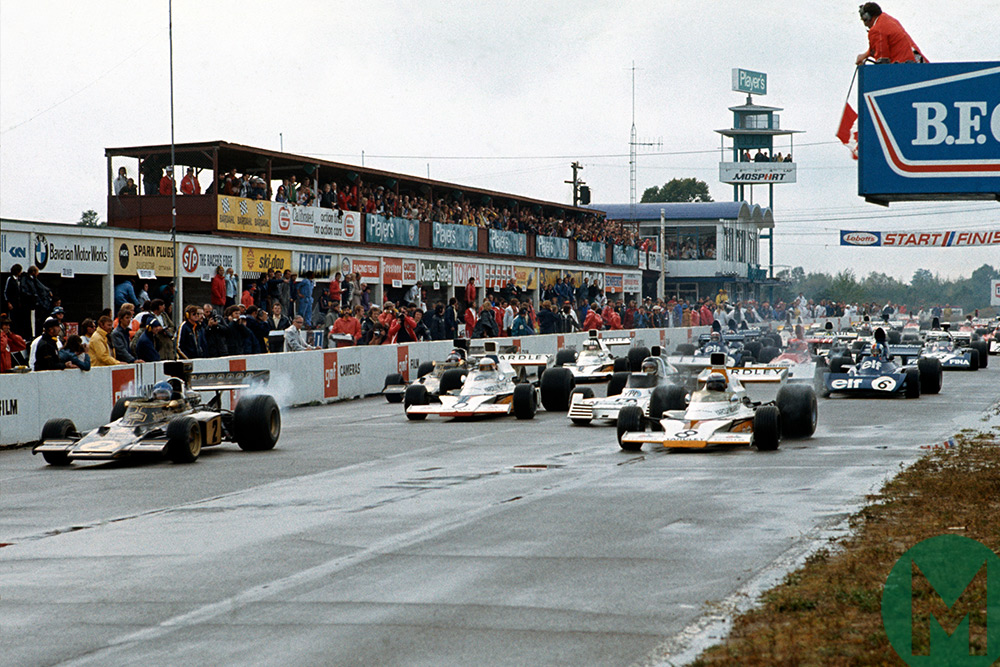 1932 The BRDC 500 at Brooklands is marred by the death of ‘Bentley Boy’ Clive Dunfee. He was fourth when he took over the 8-litre Bentley ‘Old Number One’ from his older brother Jack. But Dunfee lost control when he ran too high on the Members Banking while passing Earl Howe’s Bugatti and John Cobb’s Talbot. Dunfee was thrown clear and killed and his car somersaulted over the banking with Dunfee’s wife, film actress Jane Baxter, watching in the stands. Jack Dunfee immediately retired from motor racing.

1995 David Coulthard converts his second successive pole position into a maiden Grand Prix victory at Estoril. Williams-Renault team-mate Damon Hill was unable to challenge after being stuck behind Michael Schumacher’s Benetton-Renault and switched to a two-stop strategy as a consequence. Schumacher finished second – 7.248sec behind Coulthard – and was now 17 points ahead of third-placed Hill in the standings. The race had been red flagged when Ukyo Katayama rolled his Tyrrell following contact with Luca Badoer’s Minardi at the start.

1942 Henri Pescarolo is born. The Frenchman started 57 Grands Prix, finishing third in the 1970 Monaco GP,  but it is for his exploits at Le Mans that he is best known. He made the first of a record 33 starts in the race in 1966, winning three times in a row for Matra from 1972-74. Pescarolo added a fourth success in 1984 when sharing Joest Racing’s New Man Porsche 956 with Klaus Ludwig. His final appearance as a driver came in 1999, after which he continued as a sports car racing fixture as team owner and constructor. Pescarolo was inducted into the Motor Sport Hall of Fame in June 2018.

1952 Colin Chapman forms the Lotus Engineering Company on this day. Lotus entered Grand Prix racing in 1958 and developed into the most successful British constructor of the 1960s and 1970s. Team Lotus entered 471 GPs in its original guise, with the marque winning 79 races (including Stirling Moss’s victories with Rob Walker’s Lotus 18) and the constructors title on seven occasions. Jim Clark (1963 and 1965), Graham Hill (1968), Jochen Rindt (1970), Emerson Fittipaldi (1972) and Mario Andretti (1978) all won the world championship driving Chapman’s cars.

1982 Keke Rosberg clinches the World Championship for Williams by finishing fifth in the Caesars Palace Grand Prix in Las Vegas. Alain Prost’s Renault started from pole position but lost yet another lead to mechanical woes – the Frenchman fading to fourth. Michele Alboreto (Tyrrell) qualified third and eased to a first GP victory once Prost hit trouble. Needing victory to have any hope of winning the title, John Watson finished second for McLaren.

1999 Rain turns the European Grand Prix into an unpredictable lottery that sees Johnny Herbert and Rubens Barrichello finish 1-3 for Stewart Grand Prix. Pedro Diniz rolled on lap one, pole winner and title challenger Heinz-Harald Frentzen lost victory to electrical failure, David Coulthard and Giancarlo Fisichella both led but spun, Ralf Schumacher suffered a puncture while leading and Luca Badoer – who never scored an F1 point – lost fourth when his gearbox failed. The Stewart team-mates were joined on the podium by second-placed Jarno Trulli (Prost) and a delighted JYS.

1934 The November 1934 issue of Motor Sport carries the story of the apparent racing suicide of Josef Brádzil while practicing for the Masaryk Grand Prix at Brno. The little known Czech amateur entered a brand new 6-cylinder Maserati for his first major race but the week leading up to the race was spent with time in jail and a dispute over the car’s ownership. Brádzil then crashed on his first lap in practice and was killed instantly.