Well, what can you do? It’s the question we really need to be asking after the Belgian Grand Prix. Or the lack of it.

Let’s get one thing straight: the FIA made the right call in not attempting any green flag racing laps on Sunday. It wasn’t safe at all. There had been talk about the dangers of Eau Rouge/Raidillon’s run-off areas all weekend because we’d seen crashes in W Series and for Lando Norris in qualifying that highlighted how cars so often end up in the firing line over the crest, with approaching drivers unsighted.

Well all of the drivers – save for Max Verstappen at the head of the queue – were unsighted on Sunday, even just behind the safety car. Once you let them loose at anything near top speed, even if they can keep their cars on the road and not aquaplane, they’re seeing absolutely nothing.

“Imagine doing 300kph, someone spinning in front of you and you take him with you,” Carlos Sainz says of the situation. “Too risky, too dangerous.

“Trust me, if there would have been the smallest of windows, I would have been the first one on the radio telling them to start it, because I love Spa, I love the wet, the fans deserved it, but there was no window whatsoever to actually start a race.” 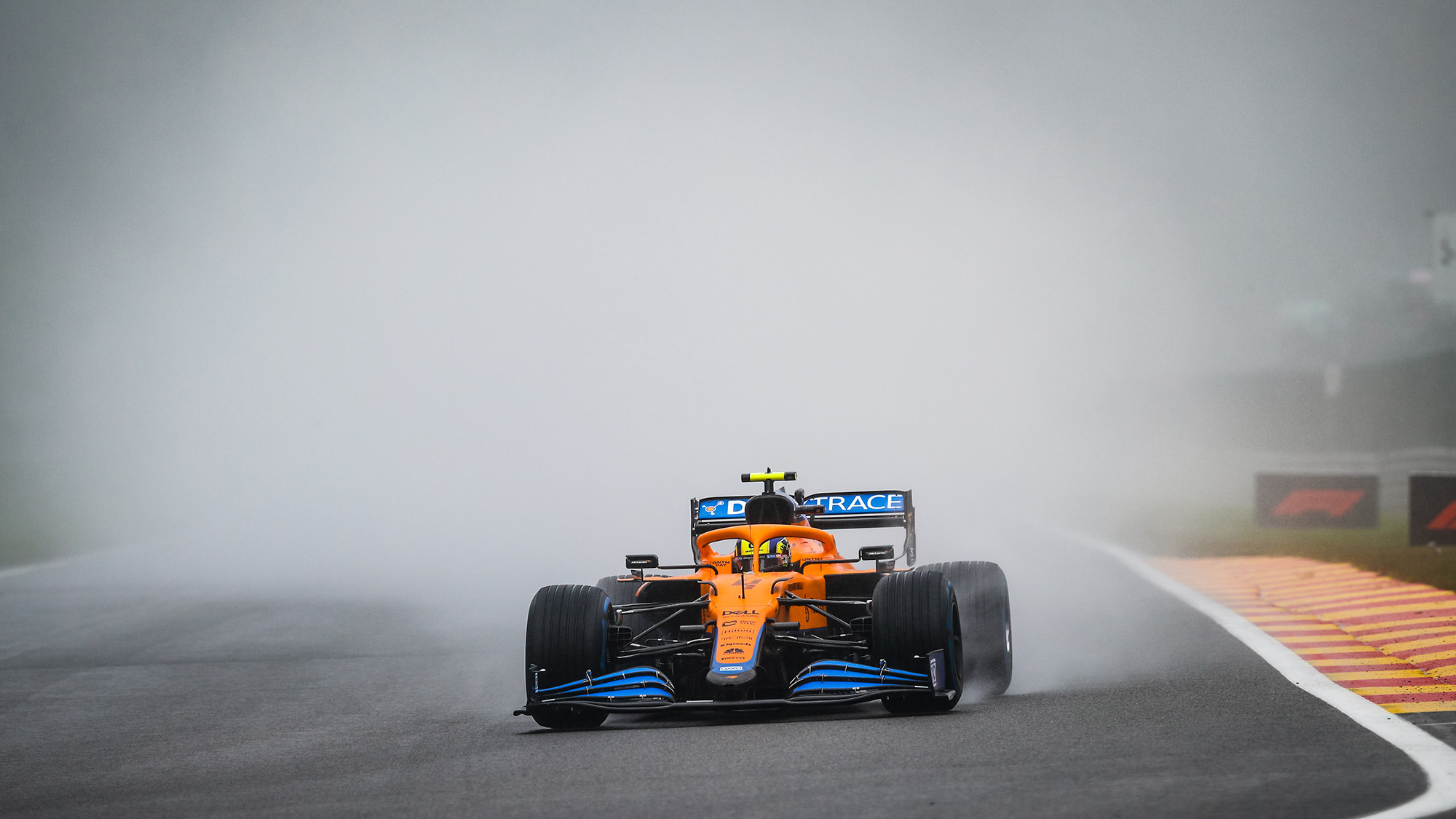 Sainz is someone I do trust. He’s a straight talker, who can be very self-critical at times but also will say it as it is even when it’s going to upset the powers that be. For example, after defending officials’ decisions regarding trying to race, he was still scathing that two laps may have been carried out just to be able to declare a result — as some have insinuated.

“If it was done just with the intention of awarding points, then I think it’s absolute nonsense, I don’t think we should do any laps just to alter the final result of a race.” 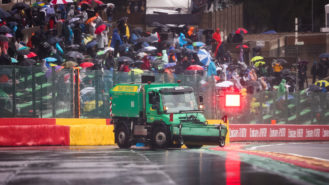 But it’s something else that Sainz said that really stood out to me as a smart explanation for what we saw on Sunday, and it’s something we need to think about but hopefully are already set to improve in future. Why is it that visibility is so bad that F1 cars can’t run in a race situation like that?

“Unfortunately the diffusers are huge, the tyres are very big, and there was quite a lot of standing water. One by one, we could have done a Super Pole, for example, no problem. We could have gone through Eau Rouge, this was not the issue.

“The issue was visibility, and in the two laps I did behind the safety car the tyres cooled down basically to zero and you were going into Eau Rouge and into that straight with zero visibility. If someone spins in front of you, on cold tyres, I’m telling you that if P10 crashes, then everyone up to P20 will hit him. That’s where a big accident, at 300km/h (186mph), can happen.” 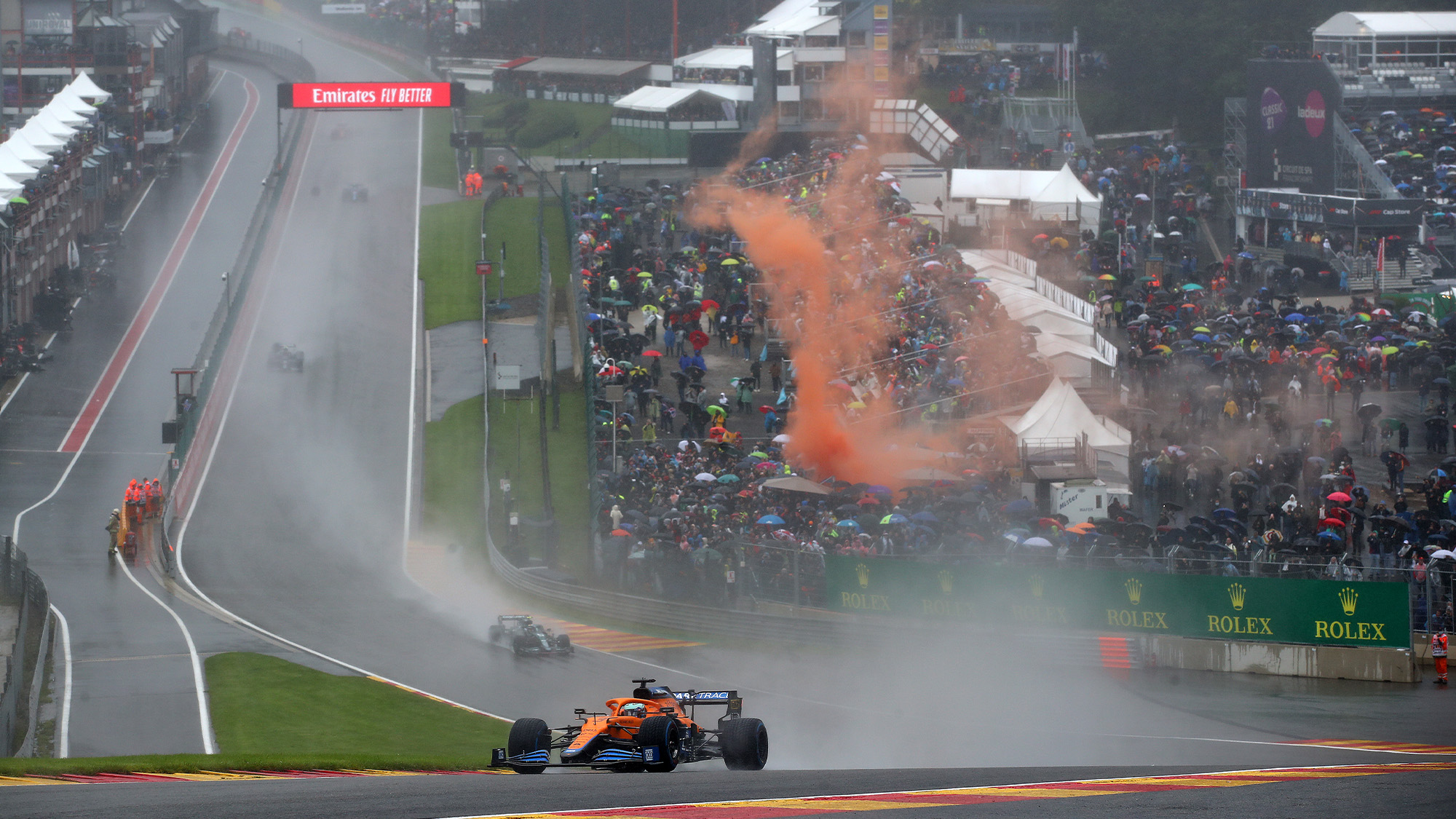 Wet weather does make accidents more likely to happen, but drivers enjoy the fact it provides them with an opportunity to showcase their skills. They’re so competitive and self-confident, they believe it will be someone else making the error and they will be the one to benefit. As long as they can see.

No amount of self-confidence can overcome pure physics, and if you don’t see a car in front of you until you are 10 metres away from it and doing any sort of speed, there’s no avoiding a huge crash. And as we’ve seen at Spa in the past, when one car hits a stationary one, the worst outcome is certainly possible.

So often the past is used as a stick to beat F1 with when it won’t run in the wet, saying we’ve run in worse conditions. That’s true, we have, because the cars were different. In the ‘good old days’ of the 50s, 60s and even into the 70s there was little in the way of aerodynamics creating serious levels of downforce, and at times there were smaller tyres, too. 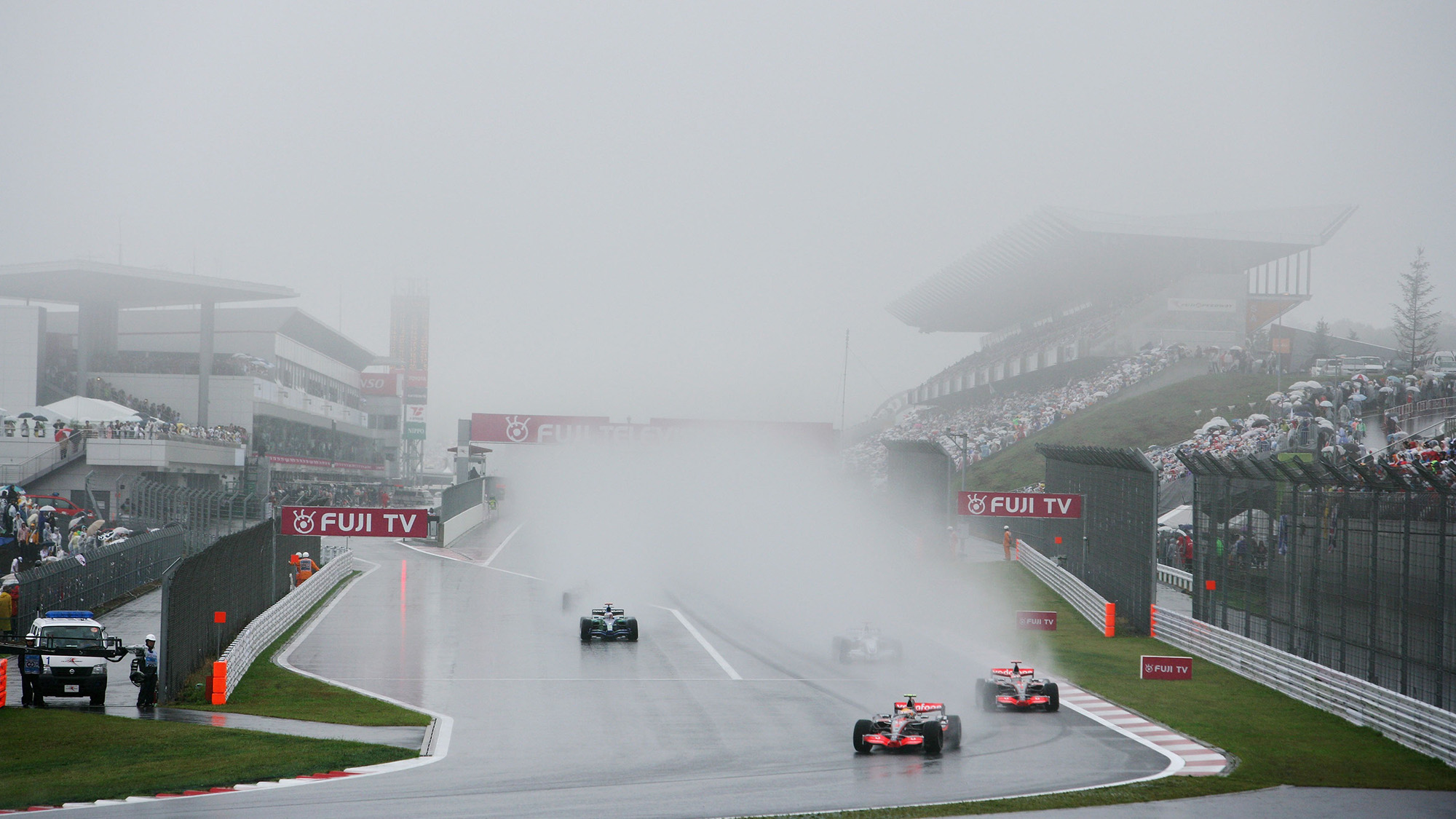 F1 raced under a Fuji deluge in 2007. But the pace was much slower

Even as aero really came into the sport, its effect was so much less than it is today. One clip doing the rounds after Sunday was of Felipe Massa and Robert Kubica having a hell of a scrap in torrential conditions in Fuji, some 14 years ago. Those 2007 cars lapped the same Spa-Francorchamps layout in 1min 46sec in the dry with low fuel. Pole there last year was a full five seconds quicker.

Think of how advanced F1 seemed in 2008, the aerodynamics were immense and had to be trimmed right back the following year as regulations changed to slow the cars. To be five seconds quicker now – achieved partly through power unit performance but mainly aero – is another category.

And that creates a massive wake in terms of disturbed air behind the car, so much so that it’s tough to follow in the dry given the performance loss for the car in tow. On a wet track where standing water has been flicked up by the wide tyres – much wider than F3 and without wheel arches to keep spray down like in Porsche Supercup, both of which ran on Sunday morning – that water is then thrown even further by the turbulent air behind, creating the wall of spray that is so hard to see through.

Wet weather is only more likely to impact races as we cram more into a season, so we could well see this problem on a growing basis. But there is hope on the horizon.

The 2022 regulations are a complete overhaul of a Formula 1 car that will see a reduction in downforce. But more importantly, a major part of that is going to be the way the downforce is generated and the wake it produces behind the car.

The intention was always to make it easier to follow in normal conditions, therefore not influencing the aerodynamics of the trailing car so much and allowing them more opportunity to race more closely, but by happy accident that also has the potential of improving matters in the wet.

You can’t see the turbulent air in the dry, so it always seems strange when a driver complains about finding it so hard to follow. But when there is water on the track, the spray produced is testament to the impact the car is having at the speed it is traveling. With less turbulent air being produced behind the car, the spray – or at least how wide it is thrown – could be slightly reduced.

Tyres will still have a major impact, and it will still be an issue when you have 20 cars running on track in a pack, but each one us likely to create a little bit less spray. If there’s no real difference between visibility this year and next in the wet then it’s almost an impossible problem to solve at these speeds without wheel arches, but if there’s a noticeable change, it just might be an area that can be improved further by regulation.