Esteban Ocon took advantage of carnage at the slippery start of the Hungarian Grand Prix to take the unlikeliest win that Formula 1 has seen in 2021.

Then, a tactical error from Mercedes saw Lewis Hamilton restart the race on intermediate tyres, while rivals opted for slicks. It allowed Ocon into the lead, followed by Sebastian Vettel and set the stage for another Hamilton charge.

As title rival Verstappen was mired in the midfield with a damaged car, Hamilton climbed the rankings and looked set for another late-race reprieve before coming up against the Alpine of Fernando Alonso who masterfullly defended his fourth place for ten laps before Hamilton finally got past.

It was the delay that Alonso’s team-mate needed and Ocon held on for the win, followed by Sebastian Vettel, who was subsequently disqualified for running too low on fuel.

The upended order also saw both Williams in the points and Verstappen scoring just two points in ninth. 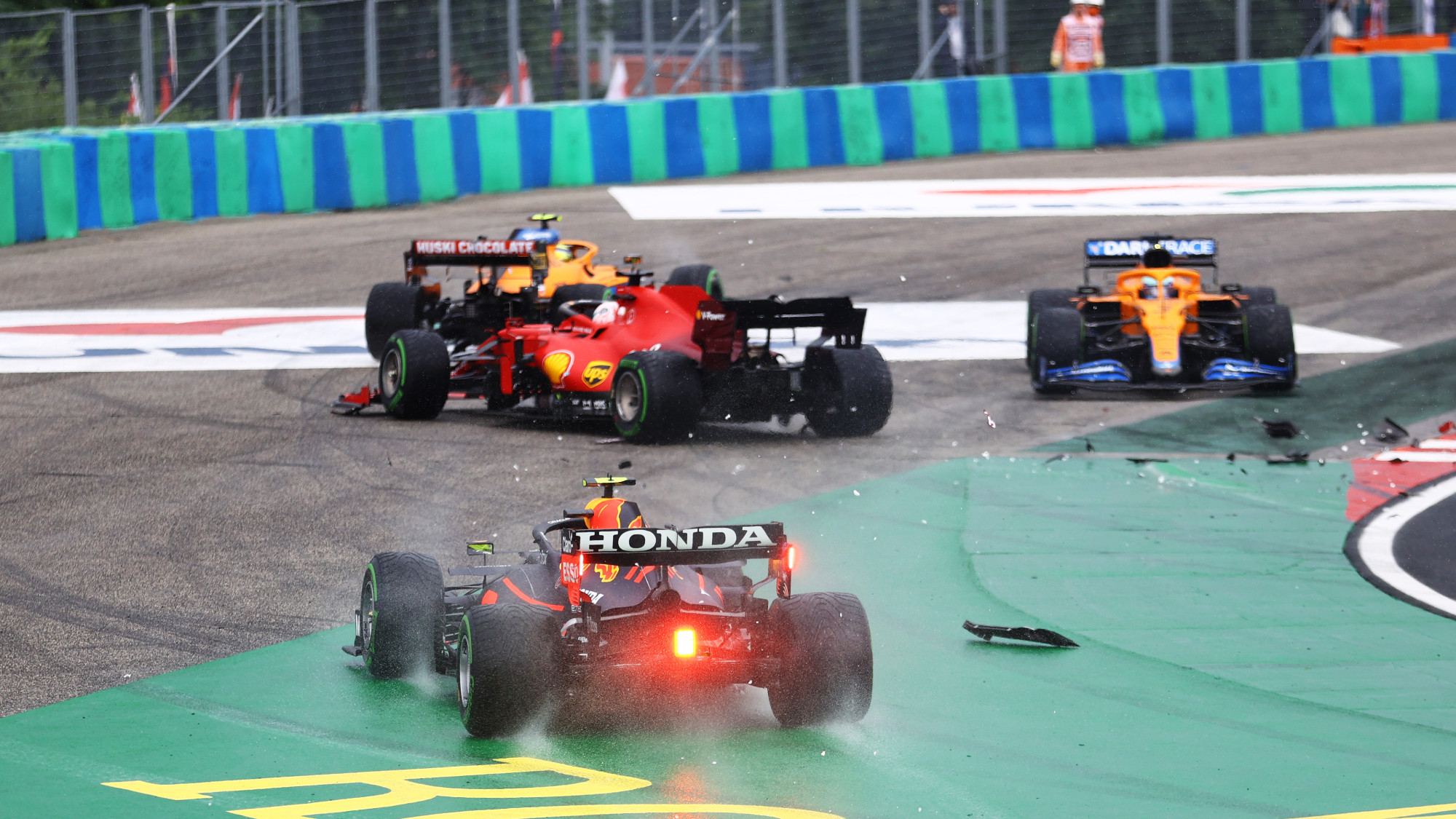 The Turn One chaos brought out the red flags

Light drizzle and a wet track for the start of the race saw all of the drivers fit intermediate tyres. Before starting the formation lap, Lewis Hamilton questioned whether Mercedes should have gambled on slicks.

The start showed why not. Hamilton stormed away from pole, which ensured that he would be clear of the carnage behind him.

Verstappen also got everything hooked, up, surging past second-placed Valtteri Bottas, who was also overhauled by Sergio Perez and Lando Norris.

But the slow-starting Finn also missed the mark when it came to braking for Turn One and, in the slippery conditions, slid into the back of Norris, who then hit Verstappen, pushing him wide in a shower of carbon fibre. 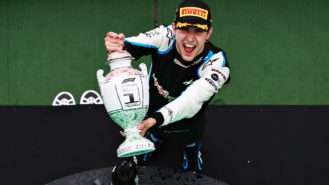 The slithering Mercedes of Bottas then collected Perez, as he turned in, putting the Mexican out of the race. He will receive a five-place grid penalty at the next race.

There was no escape for the midfield pack either, as Lance Stroll careered towards the inside of Turn One and into the sidepod of Charles Leclerc’s Ferrari, who was sat on the apex.

The pair of conjoined cars slid to the outside, spinning round Daniel Ricciardo and leaving the inside of the corner clear for  Ocon and Vettel, who started eighth and tenth, to glide into second and third.

Strewn along the side of the track were the wrecked cars of Bottas, Leclerc, Stroll and Perez; Verstappen headed back to the pits and showed the extent of his damage when he exited and a large piece of carbon fibre flew off the car.

The safety car soon gave way to the red flag and the field returned to the pitlane. Norris’s McLaren was retired and the Red Bull mechanics experienced déja vu, as they raced once more to rebuild Verstappen’s car, a year on from their rapid repair work at the Hungaroring after the Dutchman slid off on the formation lap.

Once the debris was cleared, the race should have got underway with a standing start, but it was quickly apparent, during the second formation lap, that the track was too dry for the intermediates fitted to all of the cars. 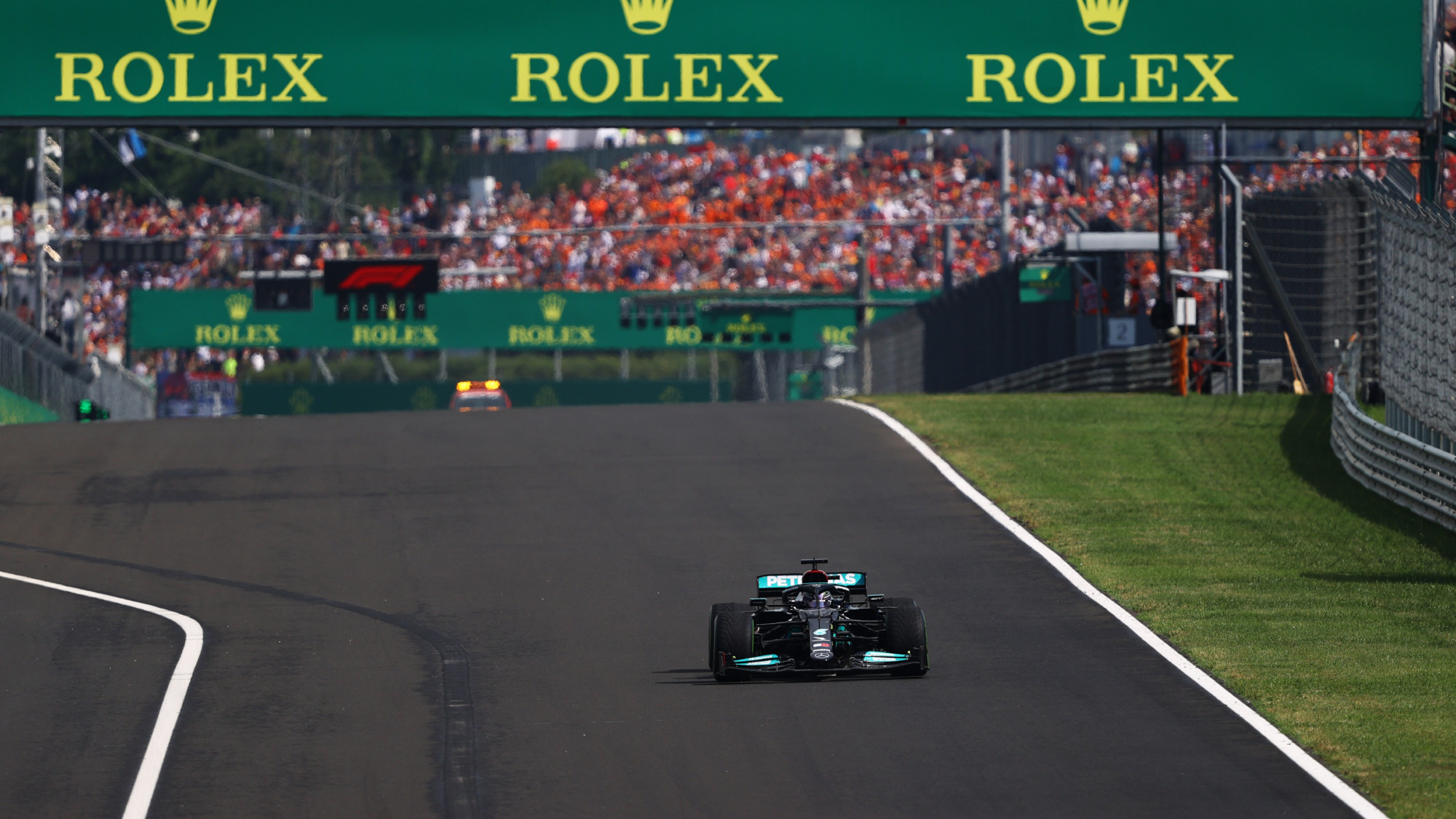 Lewis Hamilton headed for the grid, while Ocon led all of the other cars into the pits, leaving the bizarre sight of a lone Mercedes taking the start on lap four.

In the pitlane, chaotic scenes saw Räikkönen released into the path of Mazpin, damaging the Russian’s suspension and forcing him to retire. Räikkönen would later be given a 10sec time penalty for the unsafe release.

George Russell emerged at the head of the pitlane queue, ahead of Ocon and Vettel, waiting for Hamilton to pass before they were released.

As they were released on track, the Williams was just 5sec behind Hamilton but then suddenly slowed under instruction from his team, after having wrongly passed a queue of cars in the pitlane, dropping to eighth.

“Yeah, it’s dry,” said Hamilton on the radio, before pulling in to the pits for slicks; Esteban Ocon crossing the line to lead on lap five, ahead of Vettel, Sainz, Tsunoda, Latifi, Alonso, Russell and Verstappen in ninth.

Hamilton was only stopped for 2.2sec, but it was enough to drop him to the very back of the compressed grid, and he rejoined last. Ocon started lap six 1.1sec ahead, with Verstappen running 11th.

“Esteban, you are leading the grand prix,” came the unfamiliar radio message. Just as unusual was the communication from Hamilton: “Am I last?” asked Hamilton. “Affirm,” said his race engineer, Bono.

“You’re the fastest one out there,” added Bono. “You can still win this.”

By lap eight, Hamilton was 19sec behind the leaders and falling further back in 14th position. Complaining that he couldn’t even get close to Giovinazzi, the duel between the Alfa and Mercedes wasn’t the battle that anyone had expected, but it lasted two laps before Hamilton passed on lap 10. Further up the track, Verstappen was behind Mick Schumacher in tenth.

The unfortunate Antonio Giovinazzi, who gambled by pitting for slicks on lap one and lost out when the red flag, ending up at the back and on the same tyres as everybody else, received a stop-go penalty for speeding in the pitlane.

Hamilton’s progress through the field was being hampered by rising temperatures in traffic, and he also complained of lack of grip, as he battled unsuccessfully with Pierre Gasly during lap 13. 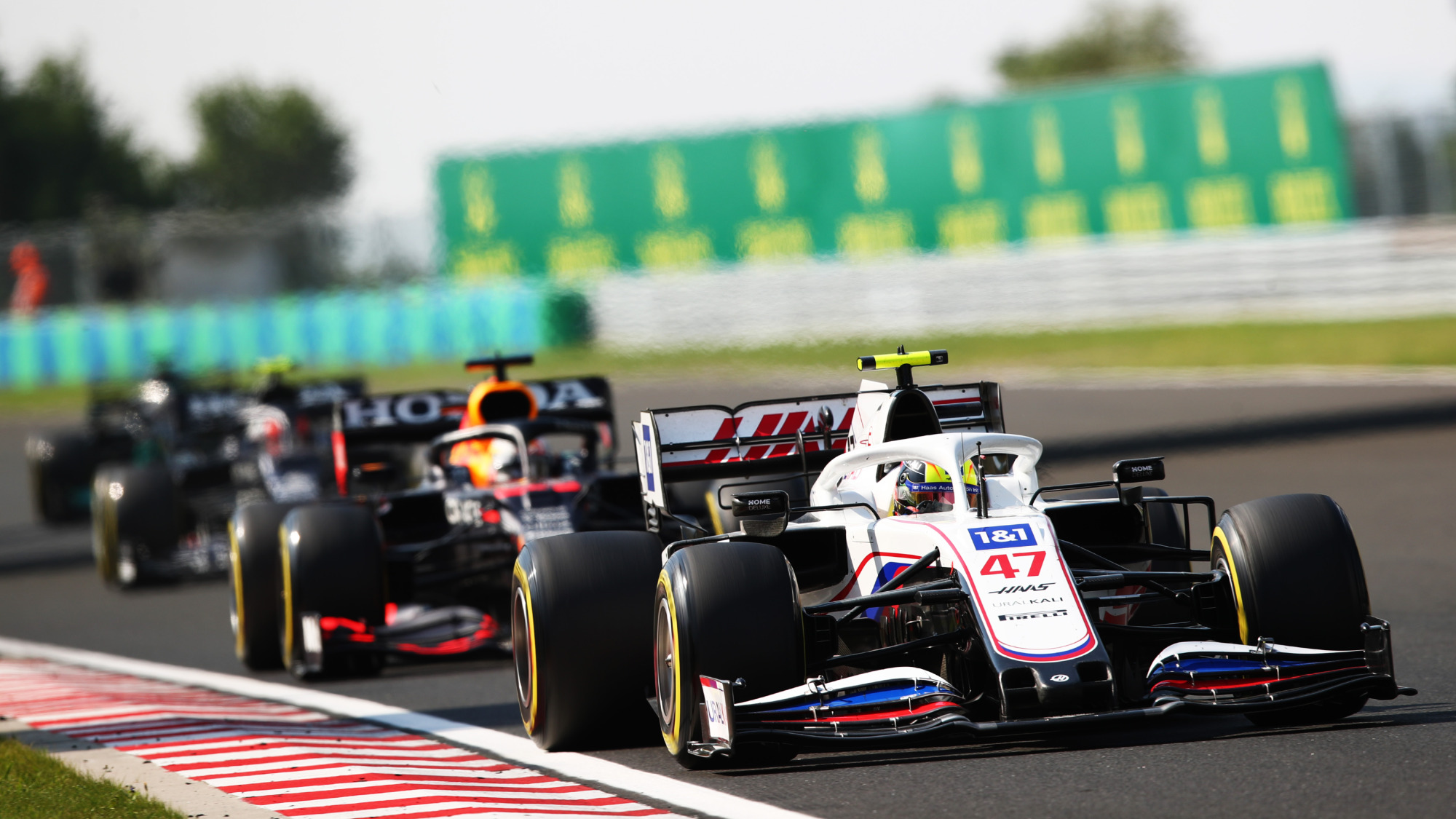 Behind him, Hamilton also went off track as he fought Gasly for 12th.

Gasly made it past Mick Schumacher on lap 16 and Hamilton quickly followed suit. Räikkönen pitted, serving his 10sec penalty.

On lap 19, as more teams turned their attention to the next round of stops, Ocon, leading Vettel by 0.75sec, was told that the strategy was Plan A +5.

Others were putting their plans into action immediately: Hamilton pitted on lap 20. Out on hard tyres, leaving him in 12th, and Verstappen was told to push.

The Dutchman pitted the following lap, along with Ricciardo but it was too late. Hamilton’s outlap of 1min 21.531 sec was enough to make the undercut work and move him ahead of both cars.

The pitting George Russell also dropped behind Hamilton. Sainz was told to pit on lap 22 but the Spaniard urged patience and stayed out.

Yuki Tsunoda was next to change tyres on lap 23, coming out ahead of Schumacher and Hamilton.

Up ahead, Ocon and Vettel were separated by around a second on lap 25 but couldn’t join the pitting cars without dropping behind Sainz and Alonso, who were within 20sec of the leaders. 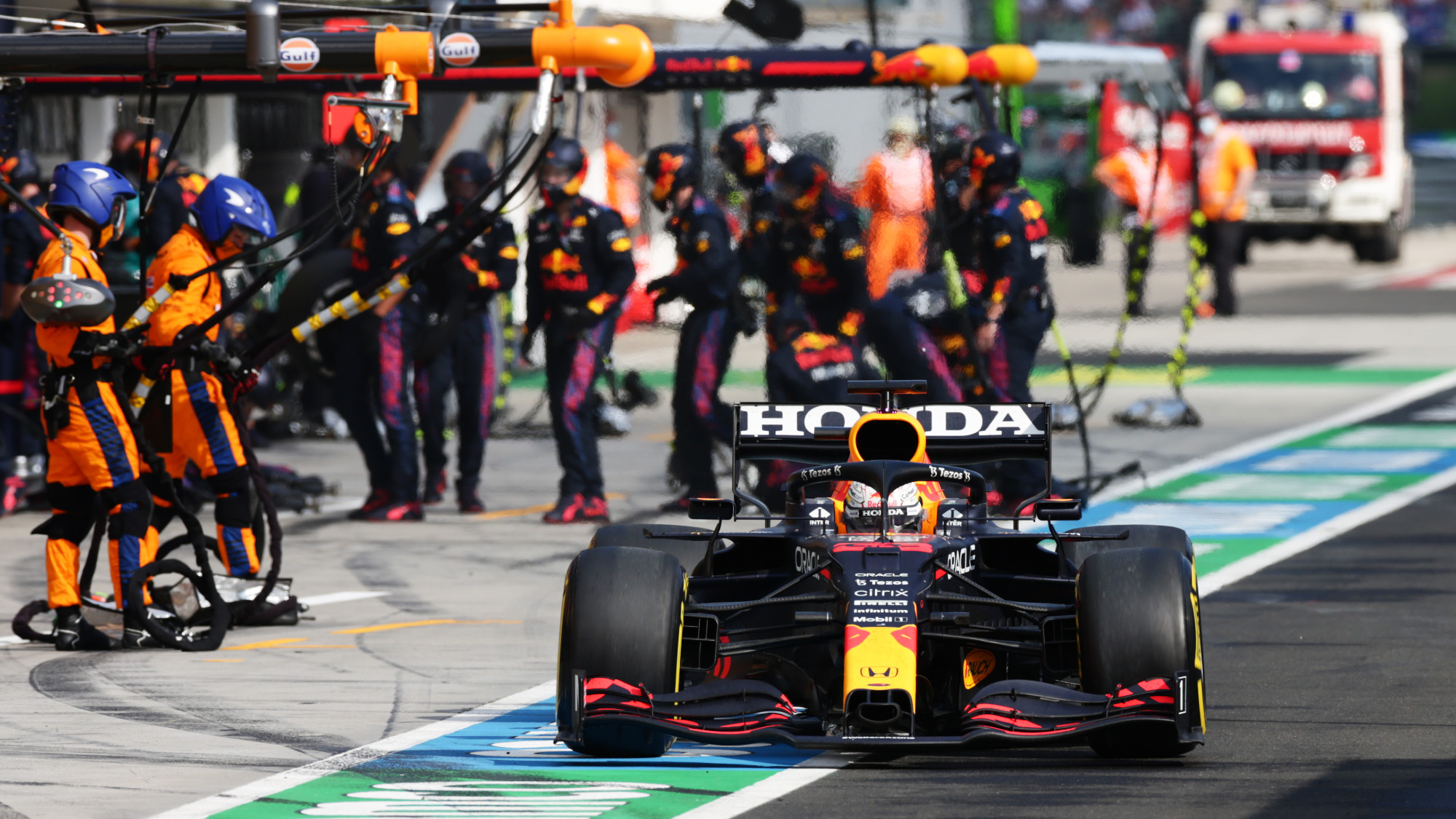 Hamilton, in eighth, was told to push every lap and had opened up a 10sec gap over Verstappen, who was 12th.

That gap had grown to 20sec by lap 30; the ninth-place Mick Schumacher holding up Russell, Ricciardo, and then Verstappen in 12th.

On lap 31, Gasly pitted from fifth, exiting ahead of the Schumacher queue.

Hamilton passed Tsunoda around the outside of Turn Four, moving up to fifth on lap 32. Sainz pitted to ensure he was out ahead of the flying Hamilton – but only by 3.3sec. At this point, Hamilton was 50sec off the lead.

George Russell managed to make it past Schumacher on lap 34, driving around the outside of Turn Two. Ricciardo and Verstappen followed past on the next lap. Schumacher pitted at the end of the lap.

Sebastian Vettel was the first of the leading pair to pull into the pits on lap 37 and a short delay meant a 3.3sec stop. Vettel returned to the track third, 8.3sec behind Fernando Alonso, as Ocon pushed hard in the lead.

The Frenchman followed Vettel in the following lap and, after a 2.3sec stopped, returned to the track on lap 38 ahead of the charging Vettel, whose outlap put him right underneath the rear wing of the Alpine, despite the slower stop. 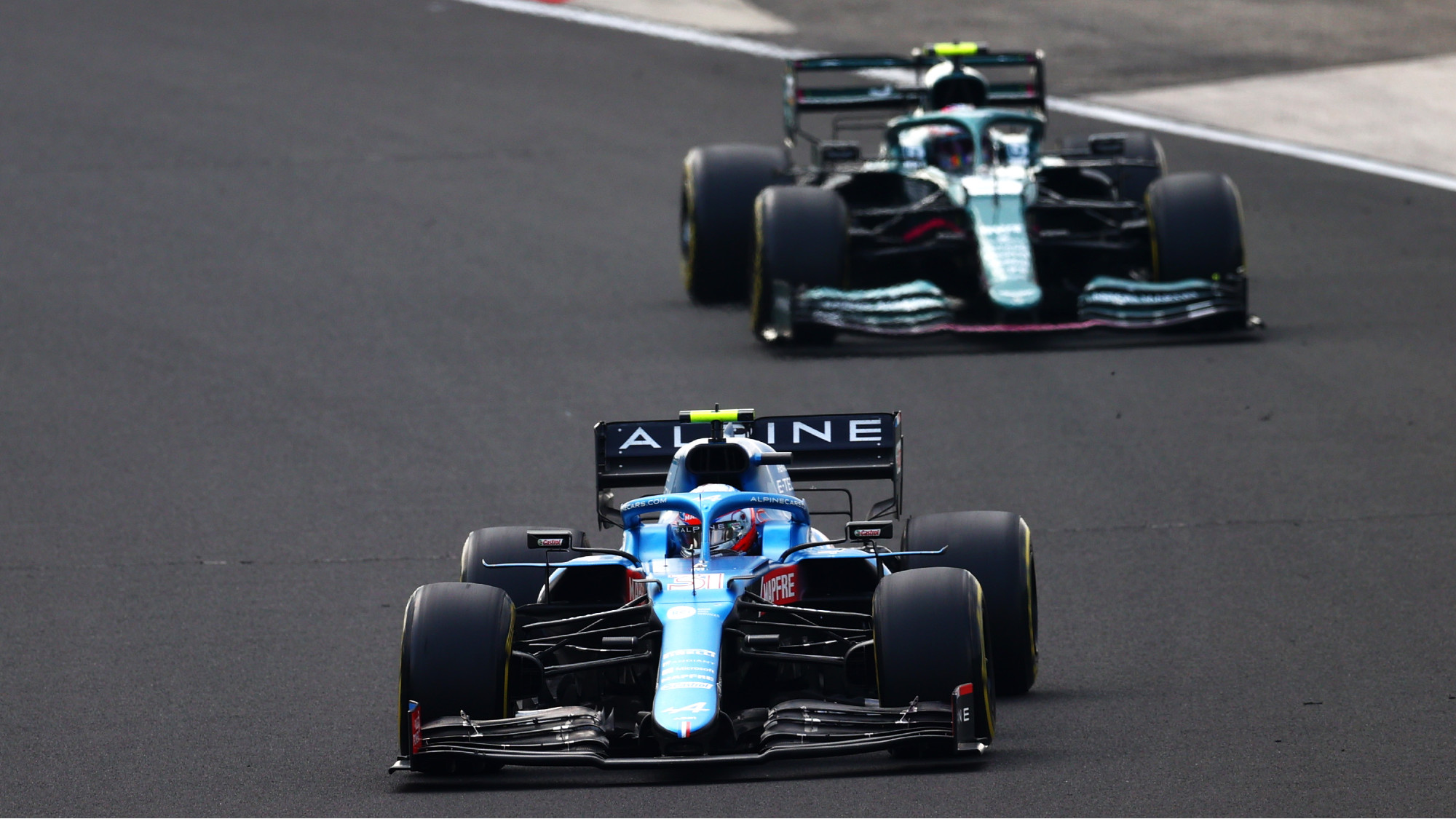 Ocon emerged from the stops ahead of Vettel

Hamilton was complaining of worn tyres, as was Fernando Alonso, temporarily in the lead.

Alonso was in at the end of lap 39, and returned in fifth, behind Hamilton. Gasly powered past Latifi on lap 40.

Verstappen, suffering from oversteer and understeer, pitted at the end of lap 40 again, dropping him to 12th, behind Kimi Räikkönen.

By lap 44, Hamilton was a second behind Sainz who was complaining about tyre wear, as Hamilton described his tyres getting a “second wind”.

It didn’t last long, as Hamilton pitted on lap 48 for medium tyres, his 2.3sec stop putting him in fifth, behind Alonso, with 22 laps to go. “Hammertime,” Bono told the reigning champion.

Ocon and Vettel were separated by just tenths of a second as the pair negotiated traffic on lap 49, while Tsunoda and Gasly were ordered to swap places by AlphaTauri; the Frenchman moving up to sixth.

Bono told Hamilton he could still win the race, just over 20sec behind the leaders on lap 50, and team principal Toto Wolff repeated the same radio message over the radio.

At the same time, Max Verstappen moved one place closer to the points by passing Räikkönen for 11th.

On lap 51, Vettel was warned that he was being held up by Ocon and Hamilton was fast approaching.

By lap 55, Tsunoda had tired of the AlphaTauri swap, complaining of running in Gasly’s dirty air. 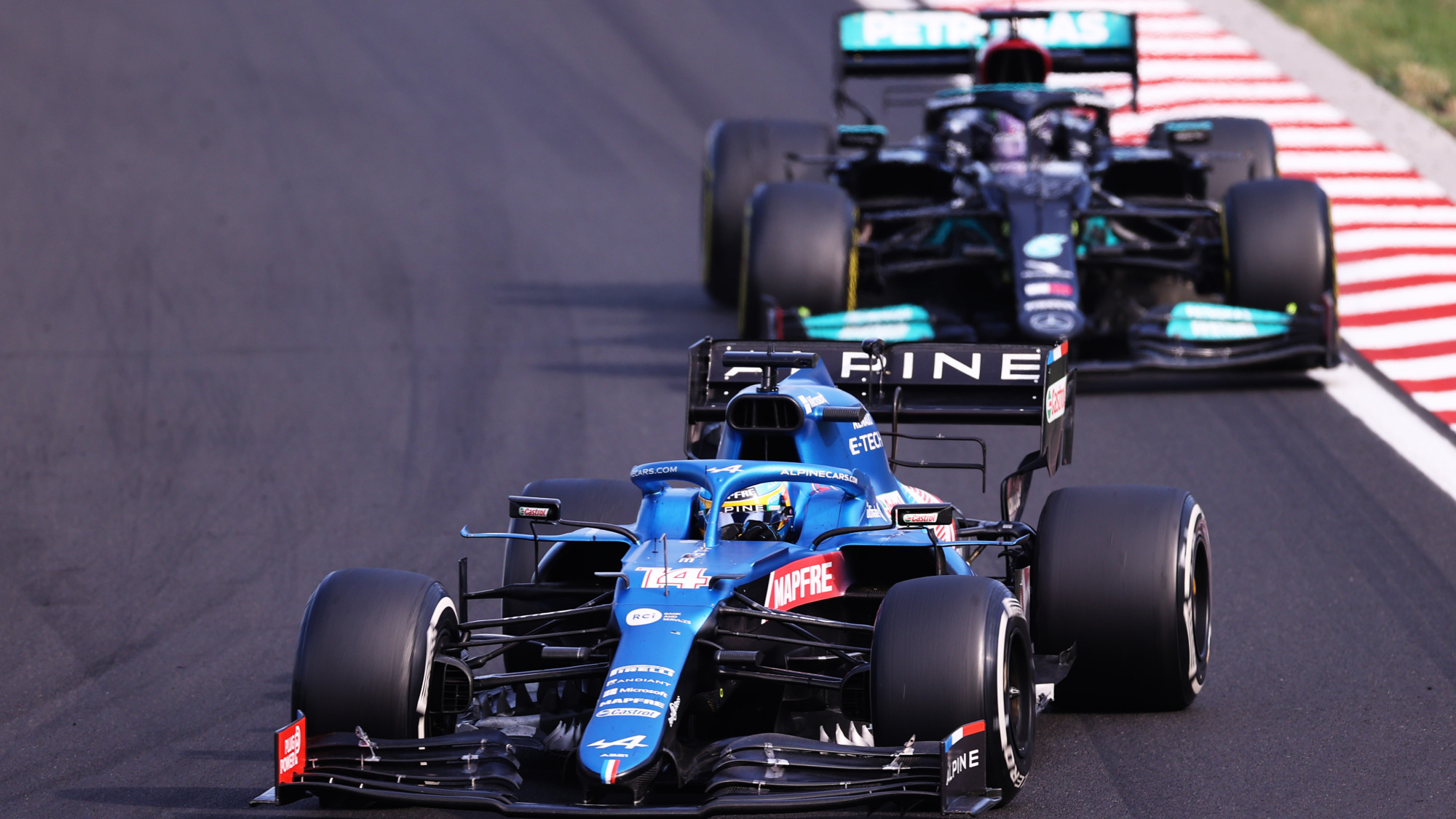 There wasn’t much air between Alonso and Hamilton, however, after the Alpine locked up and the Mercedes driver made his move. The two champions ran side by side, switching back and forth, but Alonso’s wily defending kept Hamilton behind, bringing more hope to the leaders, as the remaining laps continued to diminish.

Hamilton tried again on lap 57, but the perfectly-placed Alpine forced the Mercedes to the outside, where there was no way past. “He’s all over the place,” said a frustrated Hamilton on lap 60.

Lap 61 brought Verstappen into the points with a pass on Ricciardo around the outside of Turn Two.

The cars came closer than ever on lap 63, as Hamilton drew alongside Alonso on the run up to Turn Four, but backed out.  “Do you see he just moved over on me!” Hamilton exclaimed on the radio.

A lock-up at Turn One on lap 65 was what Hamilton needed, and he slid through into fourth and in pursuit of Sainz — hopes of victory extinguished, however, thanks to the defending of Ocon’s team-mate.

The Mercedes moved straight on to the gearbox of Carlos Sainz and got past at Turn One on lap 67, with a 9sec gap to second-placed Vettel.

It was worth chasing for Hamilton who charged once more, closing down the gap to under 3sec, but it was too little, too late as Ocon crossed the line for victory, followed by Vettel in second.

Sainz held on for fourth, followed by Alonso, Gasly and Tsunoda. The two Williams, led by Latifi were eighth and ninth, with Verstappen claiming the final point, losing the lead of the drivers’ championship.

That wasn’t the end of it, though. Vettel stopped just beyond the line, low on fuel and it later emerged just how low he was. The Aston Martin driver was disqualified after not having enough fuel to provide a sample, promoting Hamilton to second and Sainz to the podium.