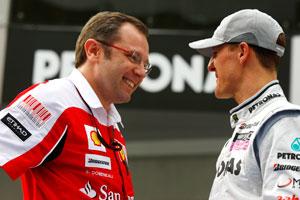 For most, if not all, of the designers in F1, Domenicali’s words will be heresy, for their constant quest is to achieve as close to perfection as possible, and quite right too – that’s what they’re paid for. But a man like Patrick Head, as much a racer as anyone I have known in this business, has always been able to see the bigger picture, to appreciate that Grand Prix racing is – or should be – much more than merely a technical exercise. It is also a sport, and one that requires fans to enable it to survive.

Those fans need to be entertained. As Head once said, “Imagine how spectacular Monaco would be if we ran there with ‘Hockenheim’ wing settings…” Very well, Patrick was speaking some years ago, when Hockenheim was still a flat-out blind, but his point was well made. It’s interesting to remember that in those days, when the cars were as ‘trimmed out’ as possible, in the interests of straightline speed, they twitched and moved around in the stadium section most entertainingly. 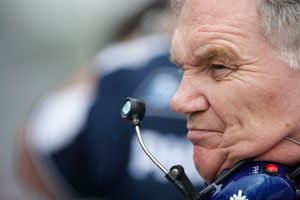 Over the years I’ve written endlessly of the need for a complete reappraisal of Grand Prix racing, and where we – the fans – would like it to go. Personally I believe we have taken a good step forward this year, with the ban on refuelling, which has revived the need for a driver to look after his tyres, and will reward artists in the Clark-Stewart-Prost mould. A driver, as Robert Kubica has said, now needs to ‘manage a race’, rather than go through a series of qualifying sessions – which are great on Saturday afternoons, when they decide the grid, but quickly became too much of a muchness on Sundays. There is now, as Jenson Button has superbly demonstrated, more than one way to win a Grand Prix.

So all that’s good, but it is not enough. Since its soporific start in Bahrain, the F1 season has picked up dramatically – but it would not, it must be said, have done so to this degree had not rain played so big a role. In both Melbourne and Shanghai, the races were mainly wet, and in Sepang – admittedly with the help of complacency by McLaren and Ferrari – mixed conditions in qualifying led to a highly unusual grid, with four major players towards the back. 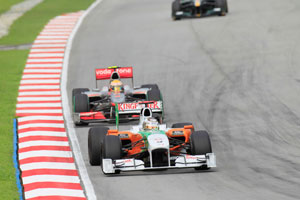 Lewis Hamilton may lack his team-mate’s delicacy when it comes to going quickly and babying your tyres, but his aggression, his freestyle approach to overtaking, has been one of the highlights of the year. In Sepang, where he started 20th, Lewis sliced through the field in amazing style – until he caught Adrian Sutil. The Force India wasn’t as fast as the McLaren, but it was very quick in a straight line, and driven extremely well. At that point Hamilton’s only hope of getting by was to pressurise Sutil into a mistake, but it never came.

The race was dry in Malaysia, of course, and I thought the Hamilton-Sutil duel served very well to highlight F1’s abiding problem: when grip levels are normal, overtaking is simply too difficult, and, while the layout of many circuits doesn’t help, the main culprit is aerodynamics.

As Domenicali says, the F1 car is too efficient. You only have to see how good the racing becomes when it is less efficient, when the track is damp and grip levels are reduced, to appreciate that. Next year the controversial ‘double diffuser’ is to be banned (as it was originally intended to be from 2009 on), and that is good, but much more needs to be done.

As the powers that be contemplate the future, let them concentrate not on tricks and artifices – a minimum number of pitstops and the like – but on tailoring the next generation of Grand Prix car so that it can race more effectively. The technical gurus may not like it, but in the end – as it should be – it’s the fans who matter most. They’re the ones who pay for it, after all.