Fernando Alonso’s puzzling, hospitalising crash in the McLaren-Honda dominated the headlines from the final day of Barcelona testing. But amid that drama, a late lap by Nico Rosberg’s Mercedes strongly suggested that the Silver Arrows are still the dominant force. 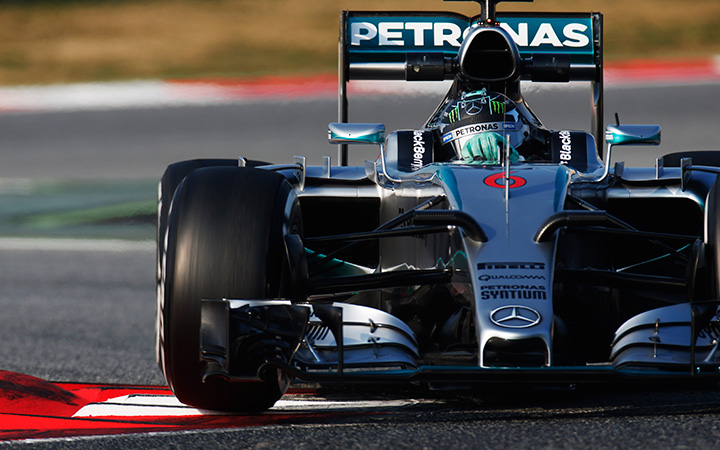 Nico reckoned his lap of 1min 24.321sec on the last day of the first test (there’s another beginning this Thursday) was nothing special. He complained of the windy conditions making the balance of his Mercedes W06 unpredictable from one corner to the next. He also said that according to their numbers they had done better laps on earlier days (thereby confirming they’d been much more heavily fuelled when Lewis Hamilton recorded a 1min 24.9sec two days earlier). Pole position around here for last year’s grand prix, incidentally, was 1min 25.232sec, set by Hamilton’s W05 on soft tyres theoretically around 0.6sec faster than the mediums fitted to Rosberg’s W06. So on a difficult, windy day, on tyres that should be 0.6sec slower, he’s beaten last year’s pole time by 0.9sec. It’s quite feasible he could lap 2sec under the pole time given equivalent tyres and a more settled day.

That’s all useful information in trying to decode the puzzle of the 2015 form book. Rosberg’s lap was actually two-and-a-half tenths adrift of the fastest time of the test – that set by Romain Grosjean’s Lotus-Mercedes, also on the final day. The crucial difference is that the Lotus’s time was done on a set of super-soft tyres which Pirelli believe to be between 1.5-2sec faster than the mediums. Translation: all other things being equal (which they might well not be), the Merc is somewhere between 1.2 and 1.7sec faster than the identically-powered Lotus. It also appears to be significantly faster than anything else.

We have to make all the usual testing caveats here. Fuel levels differ; the track is quicker at some times of day than others – the cold tarmac prevents the rubber on some cars from reaching its optimum operating temperature, but others are fine; teams can each have very different programmes to one another, etc. But based only on what we’ve seen and on the estimates of Pirelli regarding the relative speeds of each compound, if we take the best times recorded by each car over the four days and then make allowances for which tyres they were on when those times were set, we get the following theoretical super-soft lap times (see right).

There’s a suggested pattern from all of the multiple laps of running that Ferrari and Lotus have made genuinely big progress – and that they might actually be somewhere close to Red Bull pace. Williams, just like Mercedes, appears to have been running conservatively (even devoting one day to pit stop practice) and it would be no surprise at all if it went very much quicker in the final test.

On the evidence seen so far Renault appears to have made less engine progress than Ferrari or Mercedes from 2014 – and already it is talking openly of saving some of its development tokens for later in the season. Red Bulls are traditionally among the slowest at the end of the straights but at Barcelona that deficit was particularly large – 202mph compared to the Williams-Merc at 210mph. End-of-straight speeds are of course also a function of drag resulting from the downforce levels generated and those cars slow at the end of the straights may well be entering those straights faster. But even so. Looking at the end-of-straight speeds of the Mercedes, Ferrari and Renault powered teams in turn, we see an interesting picture of implied downforce (see right).

Given the same engines, the fastest cars over a lap are slower at the end of the straights on account of more downforce. The McLaren-Honda incidentally was timed at 203mph.

The Honda is still suffering major reliability problems which as well as severely limiting the number of laps was also responsible for the engine running in a very detuned mode (the suggestion being it was approximately 60bhp down on what it’s expected to give when running cleanly). Alonso’s crash brought the test programme to a premature end and the car is desperately short of miles with the Melbourne clock counting down.

But there’s reason for optimism about the MP4-30’s inherent pace. To be within 3sec of the Merc pace with all those limitations, without the opportunity of seriously chasing performance, is more than respectable. To put it into perspective, it’s within 0.6sec of last year’s pole time after just a handful of very low-power laps…

If we’re looking for a dark horse challenge to Merc’s dominance, it could well be McLaren. But it’s a mighty big challenge.