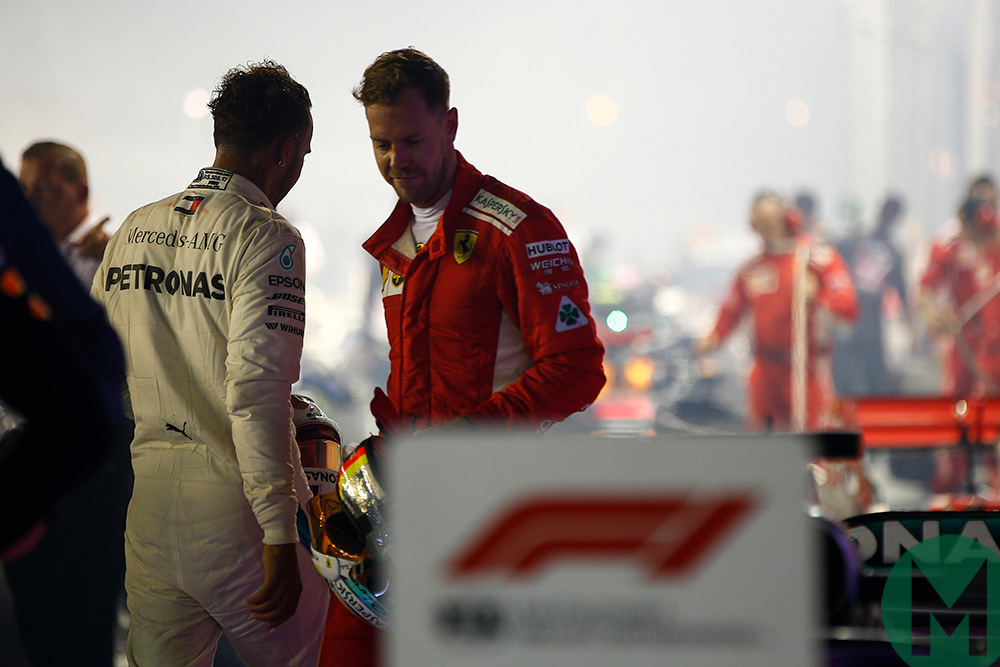 Sebastian Vettel has a mountain to climb if he’s to beat Lewis Hamilton to a fifth world title.

History indeed suggests strongly that it’s beyond his reach already.

His personal experiences, however, are proof of the benefit of never giving up.

Sixteen of the world championships since 1950 have been won by a late run on the rails.

And only Vettel can match that.

Larger such deficits have been overcome: Ferrari’s John Surtees, for example, bridged a 13-point gap in 1964 when just 27 were available to him.

There are extenuating circumstances in the above table – not least the injuries sustained and absences incurred by erstwhile points leaders Didier Pironi (1982) and Niki Lauda (1976) plus the calamitous fatal accident suffered by Wolfgang von Trips (1961).

Then there’s the ticklish problem of dropped scores – a factor in F1’s drivers’ championships until 1990.

For example, just 14 points of a theoretical maximum of 18 were available to Juan Fangio in 1956 – when only a driver’s five best scores counted.

This could affect the quarry as well as the hunter. Fangio’s Ferrari team-mate Peter Collins, one point ahead after six rounds, had 15 available to him.

A further complication that season was the awarding of the final point to the setter of the fastest lap rather than a Grand Prix’s sixth-placed finisher.

Another twist was that drivers could swap cars during a GP and share the points earned by their best placing, which is precisely what Fangio and Collins had done in Monaco and would do so again in the finale at Monza.

The latter practice would go unrewarded as from 1958 and fastest laps after 1960 would earn only bragging rights.

In contrast Piquet required just 30.5% of his potential maximum to pip a fatalistic Carlos Reutemann to the 1981 title.

Despite the spread within the above table, all bar two – 1961 and 2000 – of these title battles went down to the wire.

And as relentless as their chases were both Surtees and Prost also benefited from the errors/help of others.

(I’m ignoring that Adelaide blowout in the interest of stylistic symmetry.)

Both of Vettel’s charges required the assistance of the modern snafus of a more reliable age – a strategic hiccough (in Abu Dhabi in 2010) and a tyre sliced open by an endplate (at the first corner at Suzuka in 2012) – to twice hunt down Alonso.

It would be an even more remarkable achievement should he catch Hamilton.

For Vettel’s 2010 and 2012 suggest that every point in deficit at this stage of a season requires four to overcome it.

Given that only 150 are left begging he’s likely to fall short even if he strings together the greatest outro of F1 history.