The problems of aerodynamic porpoising seemed a little esoteric in light of the news from Ukraine, but that has been the overriding theme of the first two days of shaking down the new era F1 cars at Barcelona.

The recurrence of one of the occupational hazards of ground effect cars from four decades ago somewhat blindsided the teams despite their state of the art simulation tools. The sudden increase and subsequent choking-off of underbody downforce as it approaches the ground isn’t something that can be replicated in a wind tunnel. You’d already be damaging the tunnels’ belts before getting it to the point where the airflow stalls. Even in CFD the complexity of the equation of a moving body over the ground and the volatility of the stall pattern is beyond the capability of current programmes. And there’s no-one around in the aero departments who are familiar with the phenomenon from forty-odd years ago.

Hence it was a surprise for everyone. It’s not impossible to solve, isn’t even all that difficult in principle. But as Ferrari’s Mattia Binotto pointed out, it’s curing the problem but retaining the downforce that’s the challenging part. While the teams busied themselves back at base into attacking this new problem, those at the track made improvised solutions – which were as crude as hacking chunks out of the outer floor to reduce the downforce just enough that the airflow didn’t stall at whatever the speed threshold was that would trigger it.

Bumpy road to the top for Charles Leclerc! 🤕#F1 pic.twitter.com/Z6a5e6d3bo

It means that in terms of the competitive order, we are not really learning anything. The usual focus of refining the potential of the cars at this stage is still some way off. Some cars are whole seconds off their potential while this first order problem is attacked, others probably less so but there’s no way of knowing which is which.

Usually at this stage of the season the teams would be running through the ride height maps and fine-tuning the aero characteristics, comparing simulation with track reality and tweaking accordingly. But with a big underlying dynamic problem that isn’t going to be there after they’ve cured it, none of that has much relevance. 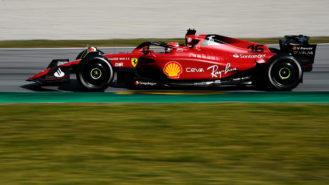 Teams have been caught off-guard by the bouncing caused by ground effect in this year's F1 cars. Success beckons for those who find a solution fastest, says Ferrari team principal Mattia Binotto

What we have seen is that the Ferrari is running very reliably and is competitively quick in the power sections. It has racked up the laps and got through its programme perhaps better than anyone else, even in between controlling the porpoising as best they can. At the time of writing it’s shown the best pace – Charles Leclerc’s McLaren-matching time was done at the beginning of a much longer run – with the McLaren and AlphaTauri the next best.

As yet the Mercedes is a long way off, the Red Bull even further. But it really means nothing. The Aston Martin is somewhere in between those two, the Alpine’s true pace has been even more heavily disguised than the others on account of a non-functioning DRS and what is suspected to be a very conservative power unit setting. The Alfa has been destroying floors and gearboxes, so severe is the porpoising but Valtteri Bottas is encouraged by its general feel and balance. Alex Albon is similarly upbeat about the Williams, though it’s not shown any form yet.

That’s how the F1 competitive order stands as the world order is seemingly in a state of flux. Let’s hope world events make it possible to continue to play in something so unimportant.