Looking back at the 2005 United States Grand Prix, Indianapolis, the most farcical F1 race of this millennium 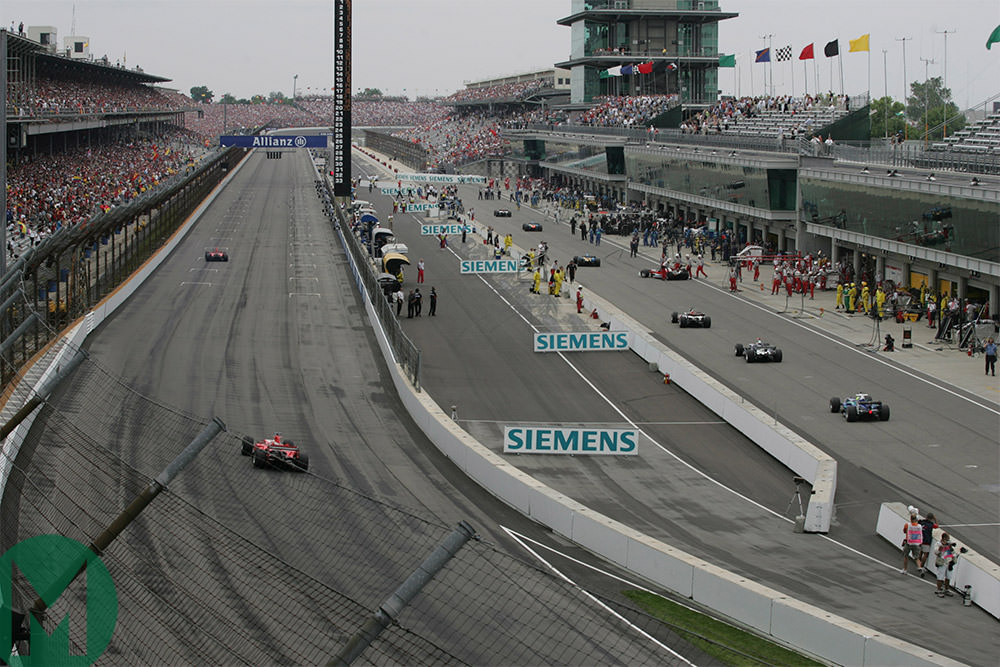 Formula 1 had always been somewhat itinerant in America. Yes, Watkins Glen hosted the United States Grand Prix from 1961-1980, but things were less settled either side of that. The Indy 500 counted towards the world championship from 1950-1960, giving the nation a token presence on the calendar, then Sebring and Riverside hosted one GP apiece in the pre-Watkins Glen era, but Detroit, Dallas, Las Vegas and Phoenix all subsequently withered. Long Beach was popular from 1976-1983, and could have become an F1 staple in the Monaco mould, but the promoter fell out with Bernie Ecclestone (money, apparently) and embraced Champ Cars instead. After Phoenix’s last race in 1991, F1 vanished from the States until 2000, when the Indianapolis Motor Speedway’s new road course offered genuine hope. If F1 couldn’t thrive at a shrine such as Indy, what hope did it have at all in America?

Being daintier than their US counterparts, the cars looked a little lost within this vast amphitheatre, especially as there were only 20-odd compared with the 33 to which crowds were accustomed at the 500. The infield section of the circuit was short on character, too, but the venue’s competitive culture stretched back almost a century and it drew a big crowd – estimated at 250,000 in year one and settling eventually at about 150,000, so well above the F1 average (assisted by the fact that about half of Colombia turned up to watch Juan Pablo Montoya).

Nobody paid too much attention when Toyota test driver Ricardo Zonta spun into the Turn 13 wall (part of the speedway oval) on Friday morning after his left-rear Michelin deflated, but the same thing happened to his team-mate Ralf Schumacher in the afternoon. The impact was sufficient to require a trip to Indianapolis Methodist Hospital, where Ralf was becoming something of a regular – he’d popped in the previous year after a similar shunt in his Williams.

Qualifying passed without a hitch, but then cars were doing only a single lap at full tilt rather than sustained runs. Michelin, meanwhile, was checking all available data. This was the season during which tactical mid-race tyre stops were banned, so how would the rubber cope with Turn 13’s extreme vertical loads over a full distance? It was clear that the level of concern was real: on Saturday afternoon I wandered into Michelin’s office to ask a couple of questions… and had to do an abrupt U-turn as it was full of preoccupied team principals who probably didn’t want me there.

At the time, Michelin’s F1 operation was led by Englishman Nick Shorrock. Looking back on the weekend subsequently, he said: “We freighted some different-spec rubber in from France, as a possible alternative, and carried out tests throughout the night. Our partners were very helpful – Ron Dennis allowed us to use his plane to get engineers to test laboratories in the States – and I think I left the track at about 23.00. I got back to my hotel, slept for an hour and got up at 2.00 for a briefing with the guys at our base in Clermont-Ferrand. That lasted four hours, then we headed straight back to the track.”

The lab tests yielded pessimistic conclusions and, on Sunday morning, Michelin informed its partner teams that it would not be wise to participate. Given the likely repercussions, various options were discussed to spare F1’s blushes. Michelin asked whether a chicane could be installed at Turn 13, but the FIA responded that it could not sanction a race on an altered circuit (even though there was a precedent – changes had been made to Barcelona during the course of the 1994 Spanish GP weekend, to reduce speeds on safety grounds). In the end, all 20 cars went to the grid – and the 14 on Michelins peeled into the pits after the formation lap, leaving the Bridgestone-shod Ferraris. Jordans and Minardis.

“As soon as we realised there was a problem we moved heaven and earth to resolve it,” Shorrock said, “and we kept trying all the way through Sunday morning. As I stood in the pits, all alone at last after a morning surrounded by TV cameras and microphones, I knew what drivers could be like: racing is their life, their passion, their job – they don’t want to do anything else. I wondered whether any might ignore our advice.”

But they didn’t and the consequential jeers drowned out half a dozen V10s. Assorted missiles were thrown upon the track and, as the mood turned increasingly ugly, a team of stormtroopers swarmed into the venue. You rarely see that at Cadwell Park or Thruxton…

The Ferraris went on to beat the Jordans by a lap and the Minardis by two, despite Michael Schumacher and Rubens Barrichello briefly tripping over each other at the first turn. It would be the German’s only success of an unusually barren campaign.

Initially faced with a barrage of animosity, Michelin later restored some goodwill by offering to reimburse spectators – or else provide them with tickets for 2006’s corresponding fixture. As I drove away in the evening, a solitary racegoer was still standing opposite the main entrance bearing a hastily created cardboard sign: “Michelin sucks.” You could understand his perspective but, behind the scenes, F1 had also been tripped by its own stubborn myopia.

IMS president Joie Chitwood said, “We’re as disappointed as we’ve ever been in hosting an event here. We pride ourselves on what we do and that is to be an international leader in motor sports entertainment. This had nothing to do with being a leader in motor sports. We will be evaluating our position on what is going to happen in the future.”

That would translate into two more F1 races, after which the event was dropped because Indy CEO Tony George and Bernie Ecclestone could not agree a fresh deal.

Money again, apparently, though you couldn’t help but wonder whether the reasons were a little more complex…