Sepang, October 1999. Somewhat against his will – for he had little enthusiasm for helping another Ferrari driver to win the world championship – Michael Schumacher, fully recovered from the broken leg sustained at Silverstone, made his return to racing. With two races to go, McLaren’s Mika Häkkinen had 62 points, two ahead of Schumacher’s team-mate Eddie Irvine.

To no one’s surprise, Schuey was instantly on it in Malaysia, beating Irvine to pole position by a clear second, with the McLarens of David Coulthard and Häkkinen third and fourth; in the race the Ferraris dominated, Michael dutifully giving up the lead – the victory, indeed – to Eddie. 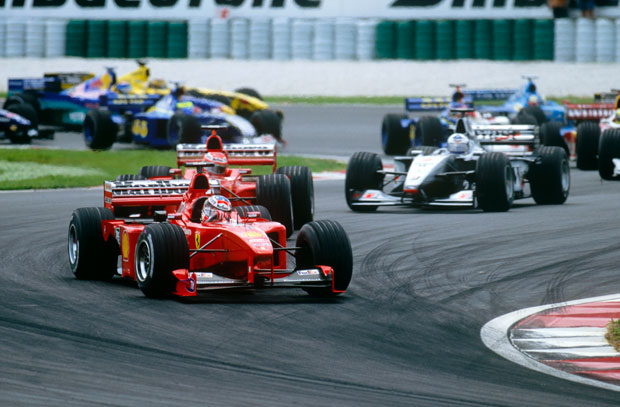 Häkkinen finished third, 10 seconds adrift, which meant that Irvine would go to Suzuka in the lead of the championship, 70 to 66. A celebratory Ferrari dinner that evening was ruined, though, when word came that, following post-race scrutineering, the cars had been disqualified, and Häkkinen – now promoted to first place and 10 points – thus declared World Champion of 1999.

Why were the Ferraris out? Because the scrutineers had found that the base plates of the cars’ bargeboards were a centimetre too short. When Ross Brawn said that his drivers would not have gained any performance advantage from this, few doubted him, but that was beside the point: rules were rules, and in this one the Ferraris didn’t comply.

“I remember talking to Ross at the airport the next day,” said Patrick Head. “Understandably he was pretty disconsolate, but he said to me, ‘There’s nothing we can do about it. If the car is illegal, that’s a massive error in our design office – we’ve had the drawings sent out, and there’s no getting out of it…’” 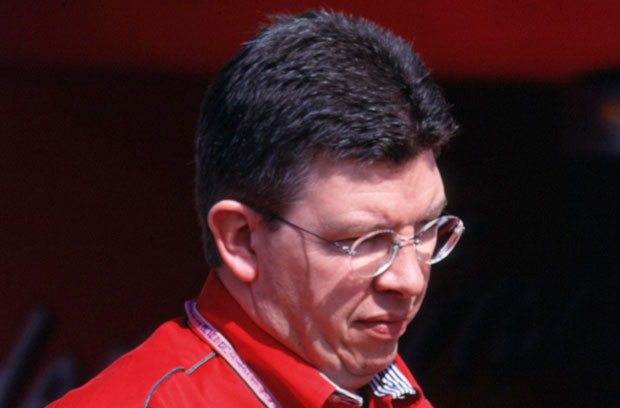 All in all, this was something of an anti-climactic end to the championship fight, and if Häkkinen and McLaren were well pleased, others were not. Suzuka, so often the scene of dramatic title deciders, looked like being a touch flat this time.

Then again… maybe not, for during the following week Bernie Ecclestone came forth with remarks about how it was “a nonsense” that the Ferraris had been disqualified, that the rules were too tight, that a showdown in Suzuka had been unnecessarily scuppered. Bargeboard, schmarge board…

Ferrari officially appealed against the disqualifications, and the FIA Court of Appeal convened the following Friday to discuss the matter. And guess what – the bargeboards that had been illegal in Sepang were found five days later to be legal in Paris! Irvine and Schumacher, a press release declared, were reinstated in first and second places in the Malaysian Grand Prix, and Ferrari president Luca di Montezemolo duly issued an unsurprisingly self-righteous statement.

“This verdict reaffirms the values of the sport, which has inspired Ferrari over 50 years, and restores to us and our fans the great victory achieved on the track, which confirms the quality of our work.

“We worked quietly in order to demonstrate to the Court in a professional and incontrovertible manner the fundamental truth which led to the decision, which has put to rights so many unjust interpretations levelled against us these past few days, about which I was very unhappy.”

What was it Ross had said to Patrick?

“Ferrari appreciates the seriousness and high level of professionalism with which the FIA Court of Appeal has dealt with this case,” di Montezemolo concluded. “Now, all our energies are devoted to trying to win the final and decisive Japanese Grand Prix.” 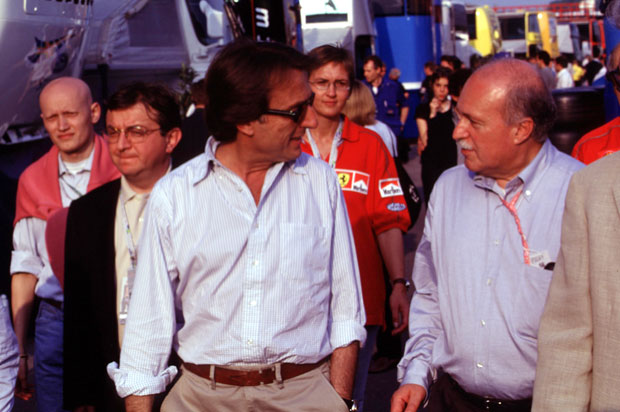 Why were the bargeboards now legal?

It was with some amazement that we learned of the grounds on which the bargeboards had been found kosher, after all, for now we were told that they had failed to conform, not by the 10mm originally measured by the FIA’s Technical Delegate at Sepang, but by an amount within the 5mm tolerance permitted by the regulations.

Was the FIA saying that its representative in Malaysia had not had at his disposal the means to take sufficiently accurate measurements?

More importantly, where had this ‘5mm tolerance’ come from? As a leading designer told me, it was mentioned nowhere in the regulations, save the one dealing with the car’s flat bottom. “It’s virtually impossible to build a completely flat ‘flat bottom’,” he said, “which is why that tolerance is allowed. But with regard to any other specified dimensions – including bargeboards – there is no mention of any tolerance at all. Our understanding has always been that if we have, say, a rear wing that’s .001 of a centimetre too high, we’re out.

“Now, however, it appears that this tolerance appertains across the board, and if that’s the case, we need clarification of the point, because quite obviously we’ve been building and racing our cars too conservatively, so as to be absolutely certain of not being the tiniest fraction outside the rules…”

Off we went to Japan, then, for Sunday afternoon at the Suzuka Palladium, and in the paddock irreverent jokes abounded. “So that’s what ‘FIA’ stands for,” someone murmured. “‘Ferrari Internal Affairs…”

Never can I recall a championship decider where there was such a common will to see one driver, rather than the other, succeed. It wasn’t a matter of being against Irvine as much as being for justice.

“Jesus, I hope Mika wins it,” said Jacques Villeneuve, “but I wouldn’t want to be in his shoes because in his mind he’s won it, you know – and now he finds he’s at the last race, and behind in the championship again. That’s a very difficult situation for him to be in – he’s bound to feel he’s been had. And Eddie, by contrast, is laughing…” 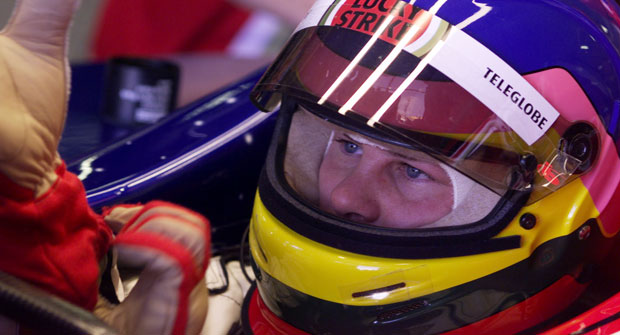 Some of us had wondered, following the Court of Appeal’s decision, whether McLaren might take cynical advantage of this new ‘5mm tolerance’ – which now apparently applied to all dimensions – to improve its cars’ performance, by raising the wing heights, and so on.

Ron Dennis said not. “If I thought it would be productive to speak my mind, I would, but I think the correct approach is a dignified one, and that’s what we’ve been trying to bring to this weekend.

“I still think that the real loser in all this is our sport. And, whatever the outcome of the race, it won’t change the result of the world championship in my mind. I think a lot of people feel the same way…”

There was no doubt about that. How had Villeneuve felt about the FIA Court of Appeal’s decision? “Well,” he said, after giving it some thought, “you grow up, and you dream, you dream about racing, and about racing being a sport. And then one day the dream stops…”

Häkkinen, always at his absolute best under pressure, led Schumacher away from the grid, raising a huge cheer in the press room, and for an hour and a half we willed that McLaren not to fail. Mercifully neither car nor driver missed a beat, so that Mika was world champion – as he had rightly been at Sepang a fortnight earlier – and this time there was no opportunity to play fast and loose with the most important title in motor racing. 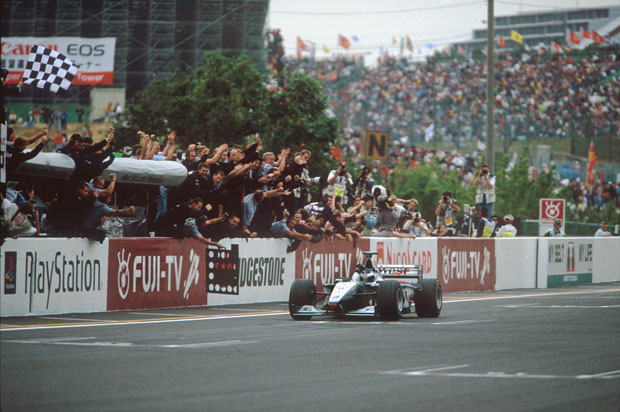 What a performance, though, what a lot of time and effort – to say nothing of legal fees – had gone into somehow keeping the world championship alive to the end.

Much easier to award double points at the last race, isn’t it? So much simpler to have it written into the rules. Come November 2014 I’ll give them normal points in Abu Dhabi, and base my world championship on that. I suspect there may be others – as keen as I to minimise farce in Formula 1 – who will do the same.