See, I told you that Peter Whitehead was a significant figure in Grand Prix history. But for this English privateer, Ferrari would this weekend in Mugello be celebrating ‘only’ its 999th world championship GP.

(I know this now only after several hours spent going slowly doolally double- and triple-checking my maths – and always coming up with 999. And, yes, I had included Alberto Ascari’s Indy adventure of 1952, plus the blue-and-white North American Racing Team efforts at Watkins Glen and Mexico City in 1964.)

Whitehead started his supercharged 1.5-litre 125 from dead last at Reims – he was one of several to arrive too late for official practice and be allocated a grid slot instead – and finished three laps behind the Alfa Romeos of Juan Manuel Fangio and Luigi Fagioli.

Scuderia Ferrari had hoped that its new normally aspirated V12 – as yet a long way short of the 4.5-litre limit at 3323cc – would narrow the gap to the Alfas. And so it would, just not on this occasion: the entries of Ascari and Luigi Villoresi were withdrawn after a problematic practice.

Therein lay my confusion: number four of 1000 was rogue. 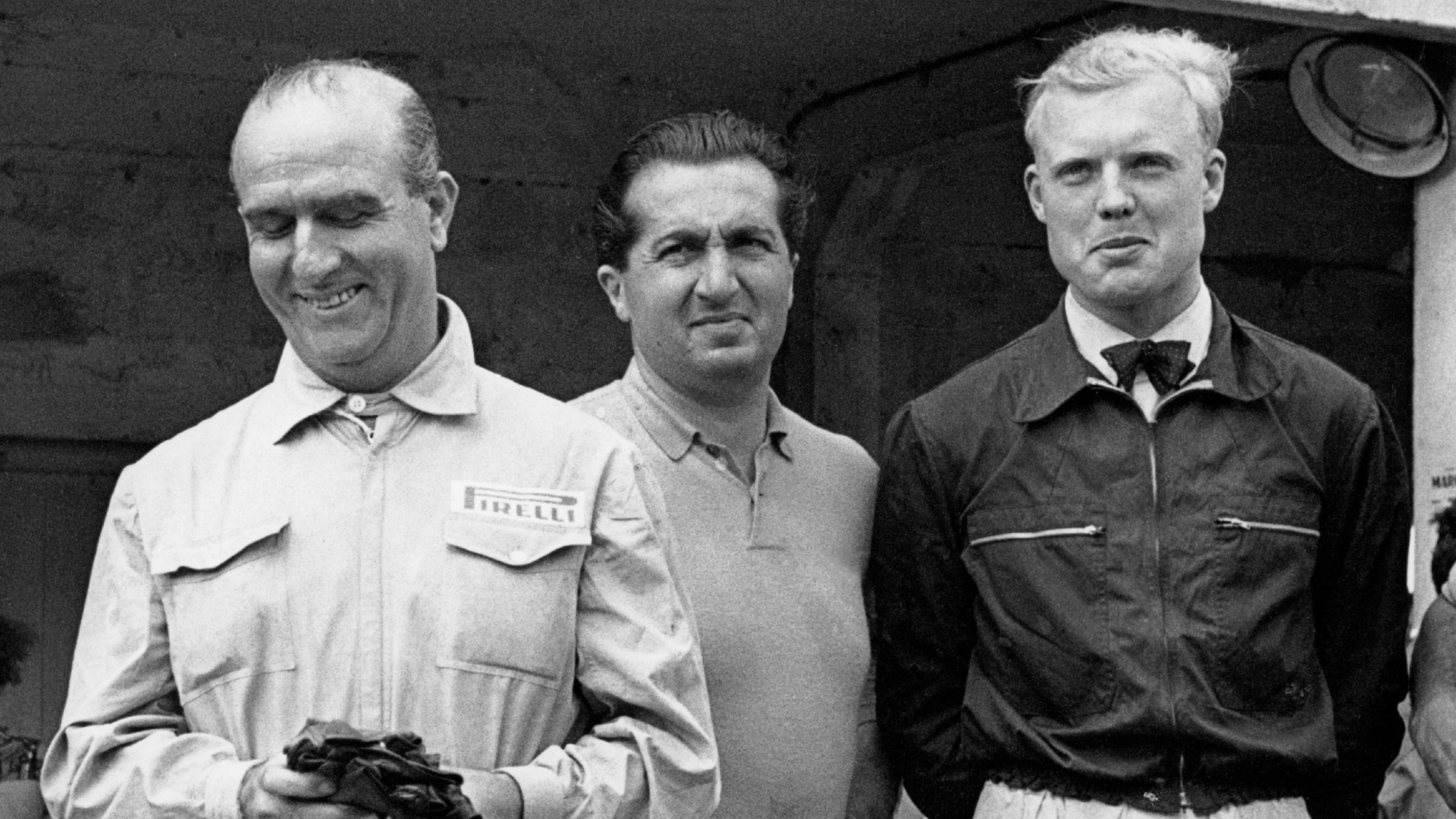 Guiseppe Farina, Alberto Ascari and Mike Hawthorn all drove for Ferrari, but Ascari was its first F1 champion

Such is the latterday proliferation of GPs, number 900 occurred as recently as the 2015 Belgian GP.

In contrast, the first 100 took from May 1950 until August 1963 to complete. Unsurprisingly, this is the most diverse tranche: four different formulae – one of which was Formula 2 – as teams, including a grudging Ferrari, moved their engines from front to back.

These were turbulent times at Maranello: Enzo told Ford to sling its hook in 1963; several key personnel had not long since walked after wife Laura mixed in; Jean Behra punched team manager Romolo Tavoni and was sacked; Mike Hawthorn was killed in a road accident months after becoming Britain’s first world champion; Eugenio Castellotti and Luigi Musso crashed to their deaths – as did the once-favoured Peter Collins; Fangio hated his season with the Prancing Horse and scarpered to Maserati pronto; son ‘Dino’ fell to a cruel illness; Lancia handed its bankrupt stock to Enzo – not that he said thanks – after talisman and two-time world champion Ascari had been killed testing a Ferrari sportscar; chief designers Messrs Colombo, Lampredi, Jano and Chiti came and went; and Enzo had “killed his mother” – that is to say Alfa Romeo – in 1951.

Thus there is a surfeit of contenders for Ferrari’s most significant GP of this period – but if there is an obvious place to ‘start’, it’s GP 100: John Surtees relegates Lotus’ Jim Clark to the only second place from his 72 world championship starts at the Nürburgring in 1963 – vindicating the efforts of Il Grande John to worldly-wise insular Ferrari in conjunction with thrusting young designer Mauro Forghieri.

Surtees built on that foundation to win a thrilling 1964 world championship in Mexico City – with, ahem, a helpful nudge from team-mate Lorenzo Bandini – but incipient politics wore him down and he turned on his heel in 1966 with a second title beckoning. 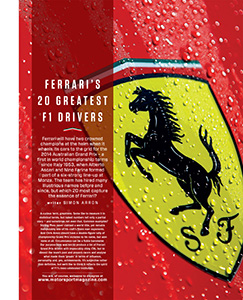 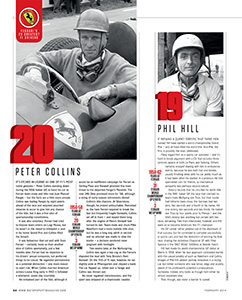 Ferrari was slumping again, despite gutsy Chris Amon’s often singular efforts in the aftermath of poor Bandini’s grisly accident at Monaco, and not until persistent wooers Fiat injected money and stability in 1969 would it flourish – a relative term – once more.

Amon decided to leave after several failures in testing of the new flat-12. He was right that Cosworth’s DFV was generally the better bet, but he must have been bemused as he continued without wins as Forghieri’s sonorous masterpiece came good at the end of 1970.

The first piece of the puzzle, this was a big stride forward, but several faltering steps – including Forghieri’s sidelining by the misplaced confidence of Fiat mandarins – still lay between Ferrari and consistent Formula 1 success.

171: The crowd has come to cheer local hero Jochen Rindt, on pole for the 1970 Austrian GP in the Lotus 72, but rookie Clay Regazzoni gets the drop from the front row, only to be passed on the second lap by team leader Jacky Ickx. The Ferraris finish 1-2 in this order, six-tenths apart – Ickx having led the remaining 59 – and shared fastest lap as they put 90sec into their nearest challenger. The potential is tangible.

Niki Lauda’s arrival was a sea change – signalled by Ferrari’s dumping of Le Mans. The Austrian was 1974’s fastest, but neither he nor car nor team were yet ready to see it through. 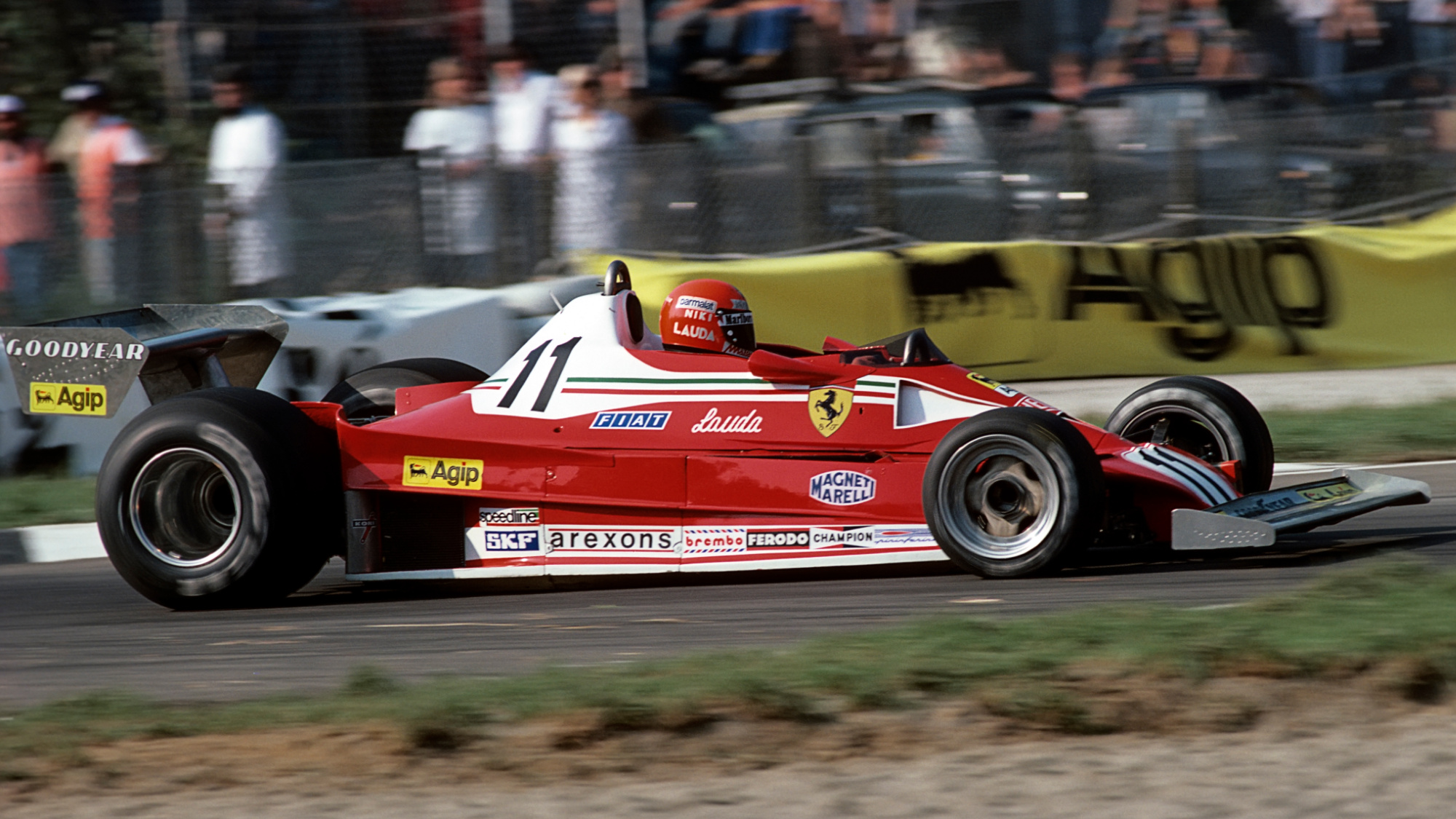 The final piece of the jigsaw was the rightfully reinstated Forghieri’s transverse gearbox jewel of 1975: Lauda would win two titles and, with help from Michelin’s radials, Jody Scheckter grabbed a third – in 301 admittedly – as ground effect threatened to suck Ferrari back under.

250: Lauda is seemingly cruising to a second title when his life flashes before him at the 1976 German GP. His treatment in miraculous recovery by Ferrari sours his relationship with Enzo; always feisty, it turns ugly. He wins the 1977 title almost out of spite, fires a crude verbal volley – that he regrets when finally he looks back – and slams the door. Scheckter is similarly driven and calculating by 1979, but not even he commands the Scuderia in the manner of Lauda. The long wait begins.

Ferrari reverted to type: the engine was all and Gilles Villeneuve – latest in the line of Enzo’s beloved Garibaldini risk-takers – worked wonders to score a few albeit memorable wins in truck-like chassis’.

The injection of outsider knowhow by designer Harvey ‘Doc’ Postlethwaite united the best of both worlds in 1982 but this promise was unpicked quickly by selfishness, sudden death and self-destructiveness.

Nice guy Michele Alboreto – the first Italian to lead Italy’s team since Bandini – gave epochal McLaren a run for its money for much of 1985, but the pressure was too great and the challenge collapsed in ignominious fashion. 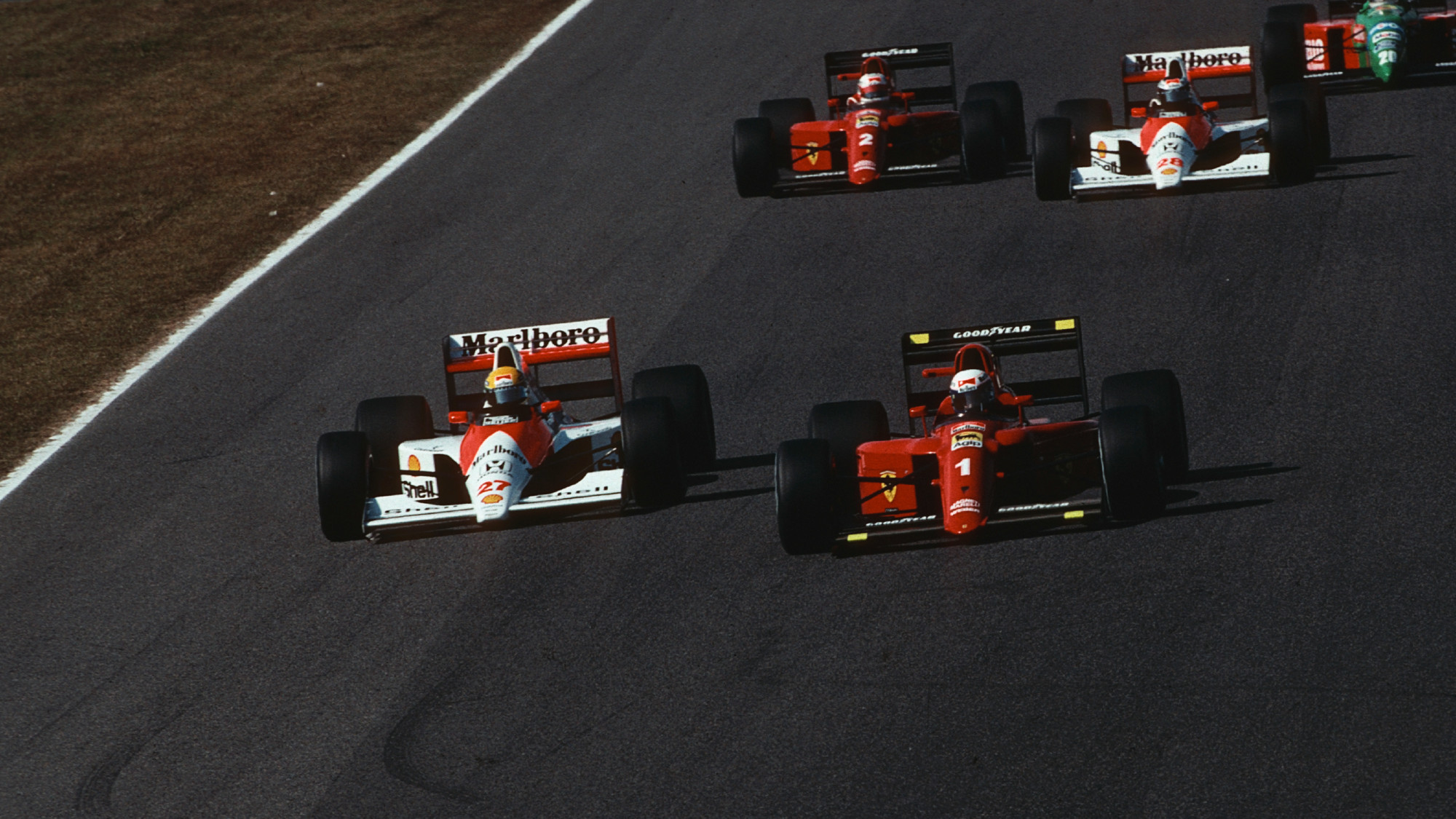 Prost and Senna approach Turn One at Suzuka. It was the closest the Frenchman came to a title with Ferrari

343: Patrick Tambay wins the 1982 German GP in the immediate aftermath of Didier Pironi’s career-ending accident during untimed practice – his pole position lies echoingly vacant – and carrying the late Gilles Villeneuve’s number 27. F1’s innocence fading quickly, such emotion is becoming a point of weakness for Ferrari’s operation in the short term but remains a major strength of its forever brand.

Gerhard Berger’s tacking two victories to the end of 1987 proved a false eve and Enzo would not live to see the next win: an emotional 1-2 at Monza in 1988. The death of Il Drake was both a dark day and a golden opportunity.

Designer John Barnard – the man who put Guildford and Technical into GTO – handed Ferrari a paddle or two for 1989, and Nigel Mansell’s early flight from Brazil had to leave without him. That victory, however, was a false dawn.

What Ferrari needed now was a Lauda 2.0

472: Alain Prost’s five wins of 1990 had been Niki-esque – but inexplicably he leaves the door ajar at Suzuka and Ayrton Senna kicks it in. The subsequent icy draught of disappointment will be felt long after the Frenchman is sacked for speaking cold, hard truths in 1991.

How bad does it have to become before Ferrari is willing to listen? Give it another 170 GPs or so…