A plucky underdog squad takes inspiration from the front-runner’s design. It then transforms itself from administration-threatened minnow to an outfit challenging at the sharp end in less than a year – and causes a stir in the paddock for good measure.

This is the current Racing Point modus operandi. But then again, it’s always been a cash-savvy ensemble. As their former Commercial Director Ian Phillips put it when retelling the story to Motor Sport: “Eddie (Jordan) taught us to prove that we can make every pound that we are worth two as far as the business was concerned. That’s what we were bloody good at.”

Not for the first time, the Silverstone squad’s history is repeating itself – the outfit pulled off similar miraculous performance gains eleven years ago.

Spa 2009 was the scene of one of F1’s great qualifying upsets, as Force India (RP’s previous guise) and its lead driver Giancarlo Fisichella took leave of their backmarker label to claim an incredible pole.

The team was just emerging from a difficult and drawn out transition period, morphing first from Jordan to Midland, then Spyker before flamboyant business magnate Vijay Mallya took over and rechristened them Force India.

“We’d had a difficult four years, struggling for money essentially,” Phillips remembers, “Mallya brought more confusion than money, but it did give us a bit of stability, which we hadn’t had. As always, because 95 per cent of the team were Jordan people, we started to perform above our station.”

Phillips recalls a chance conversation leading to a vital discovery that led to those staff being able to do what they did best.

“When Brawn GP walked away with the first race in Australia, BMW, Red Bull, Ferrari and Renault launched a protest,” he recalls, “Max used to have a sort of henchman at the circuit, (Chief Steward) Alan Donnely, who came and got drunk in the Force India hospitality unit after the race.

“I’d know him for a long time and had a chat with him afterwards. He said to me ‘Well, they protested, but Max has already decided that it (Brawn’s innovative double diffuser) will be declared legal.’ 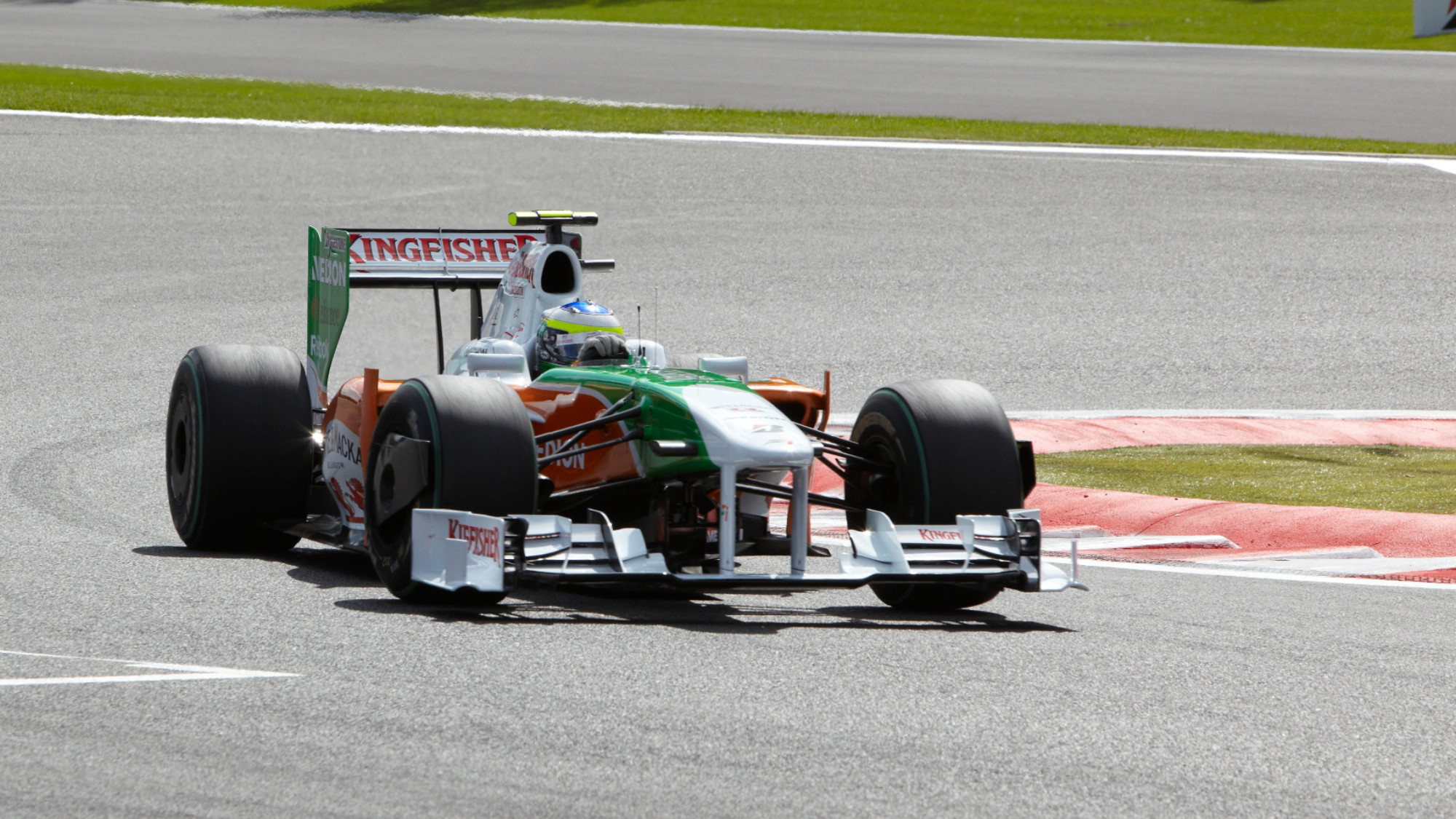 Fisichella on the way to pole position

“So I passed that message back to James (Key, then Force India Technical Director). And we got on with it, whereas I think other teams waited two months or whatever it was for the ruling, didn’t do anything, didn’t spend any money on it (designing their own double diffuser).”

With both cars finishing out of the points in Melbourne, there was no time to waste. In a scenario not too dissimilar from the “Pink Mercedes” tactic, Force India set about copying the best car on the grid.

The diffuser was updated for round four in Bahrain, but the new front wing, bargeboard and floor upgrade that took further inspiration from the all-conquering Brawn only arrived in time for the European Grand Prix in Valencia. Whilst the tight street course didn’t suit the revamped Force India, the fast and flowing Spa would be a different story.

Up to now, the team still hadn’t scored a single point all season. However, during FP1 the car looked promising, and things got even better in the second session as Phillips observed from his vantage point that day. 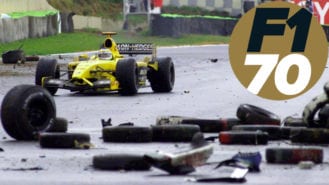 Some of F1’s greatest drives have come out of nothing. Previous race results, championship form, and car performance all go out the window; Giancarlo Fisichella’s passage to victory at the…

“I was doing that BBC 5 Live commentary with Maurice Hamilton on the Friday. I had to nudge him, about five minutes before the end of the session and say ‘Maurice, do you mind telling listeners who’s just gone sixth quickest?’

The evident harmony between driver and car began to give the team confidence:

“It must be said that Fisichella was a specialist round Spa,” Phillips notes, “He got a podium for us there in ‘97 and was on it from the start. The upgrades on the car worked really well, we were there or thereabouts and generally felt pretty good about it.

“The other thing that was firing Giancarlo up a little bit was the fact that he knew, probably better than anybody at that stage, that he was in the running for a Ferrari seat. That was probably an extra mental push for him.”

With Felipe Massa out injured and his replacement Luca Badoer looking all at sea, Ferrari were in the market for a super-sub – “Fisico” knew he could have a once in a lifetime chance to race for his beloved Scuderia.

“To be honest, we thought if Giancarlo could get a good start, Trulli would hopefully hold everybody up and we’d be long gone!”

Whatever the driving force, the Fisi/Force India combo was a revelation once qualifying got underway.

The Italian topped Q1, leading Toyota’s Jarno Trulli and the Brawn of Rubens Barrichello. Trulli then topped as Q2 as Lewis Hamilton, Jenson Button and Fernando Alonso were all eliminated.

Come Q3, there seemed to be only one man destined for pole – Fisichella. With just over 30sec left of the session, he snatched first position by less than a tenth of a second.

It was one of the closest seasons ever in terms of qualifying lap times, allowing the Force India to truly reap the benefits of their upgrade. The previous race he had qualified in 16th.

It was a watershed moment for the team, one that felt some vindication after their recent tribulations. 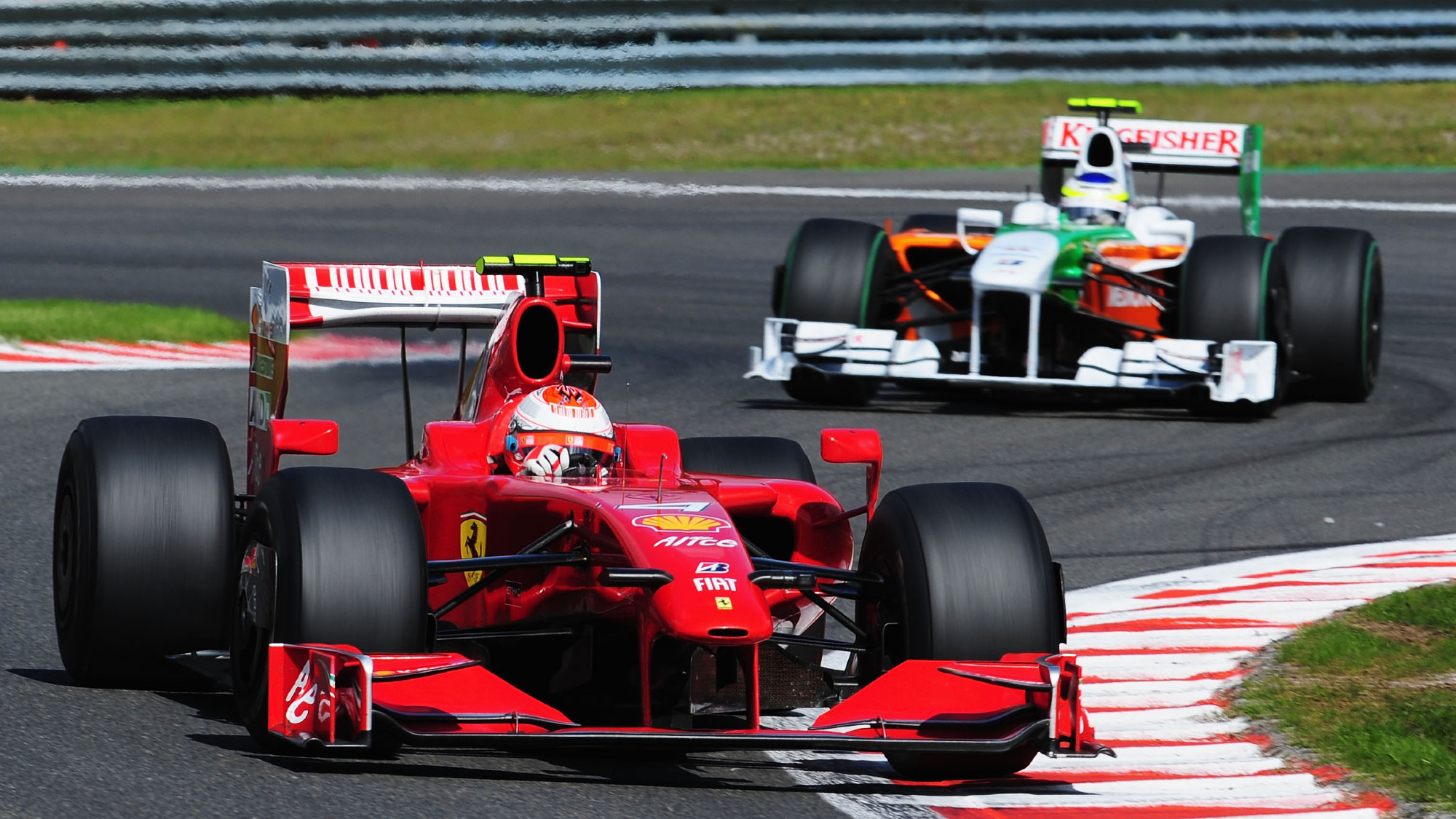 “We’d come quite a long way after four years of dodgy management and no resources,” Phillips relates, “And for those of us who have been there 20 years or so, this was great to be able to state our case, if you like, for the fact that if you have one person fewer in every department, then nobody has any time to sit around and moan and groan, everybody has to get on with their work – and it’s productive. But pole position was only job half-done.”

Would the team be willing to settle for some safe points on race day then?

“No, no, no – you’ve always got to go for the win!” exclaims the former Jordan man.

The team had a clear vision of how it could take victory, relying on the race-pace frailties of a former driver:

“To be honest, Jarno drove for us, and we thought if Giancarlo could get a good start and get into the lead, Trulli (starting in 2nd) would hopefully hold everybody up and we’d be long gone!”

The plan almost worked. Fisichella executed his end of the deal perfectly, haring off to build an immediate gap at the front. However, the famous “Trulli Train” failed to materialise – but only just.

“That weekend remains the best one that Force India ever had in any incarnation since then.”

Kimi Räikkönen had jumped into 2nd, before being a bit over-exuberant in his entry into Les Combes. He skated across the grass and hit Trulli, taking off the Toyota’s front-wing. Raikkonen was lucky to escape with no damage.

Further carnage at the back had brought out the safety car, and 2nd-placed Räikkönen – a three-time winner at Spa already – was more than ready for the restart.

Phillips recalls it vividly: “Suddenly we were being hounded by Räikkönen, and from what I remember, there was not a lot of difference in lap time. But he had the option of using KERS (Force India elected not to run a KERS system), which when he was in the slipstream, it was pretty inevitable what was going to happen.”

Fisichella had no defence as the pair arrived on the Kemmel Straight, with Räikkönen using his extra available power to breeze past into the lead.

From there on in it was as you were – the Italian showed that the Force India had more than enough race pace, but just not quite the performance edge needed to reclaim the lead.

Fisichella kept with the Finn all the way, eventually claiming a well-deserved runner-up spot, just 0.9sec behind the Ferrari.

“At the end of the day, we finished a bloody good 2nd,” reflects Phillips “and that weekend remains the best one that Force India ever had in its incarnation since then. It was a very special weekend. 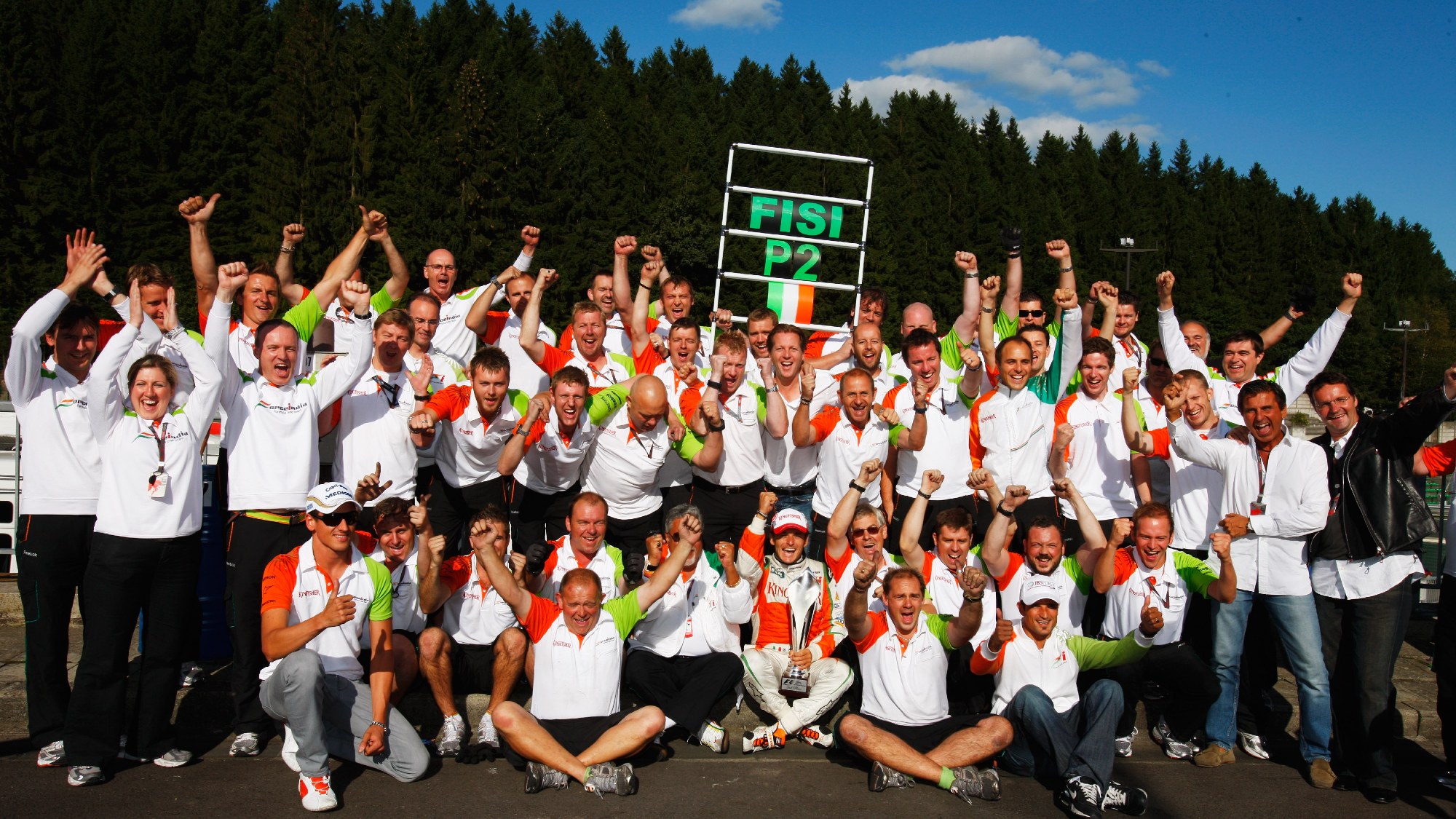 “Giancarlo just never put a foot wrong at all, kept his head and drove absolutely magnificently. He was under pressure, not just because he wanted the result and we wanted it too, but in his head he knew that that might seal it a place alongside Räikkönen at Ferrari for the next race.”

Fisichella duly left for the Scuderia, and Phillips was only happy to see his driver achieve a lifetime ambition: “He was an Italian, driving for Ferrari. He’d come from the poorer district of Rome and made himself an absolute hero – a fabulous guy. He richly deserved it.”

The team thereon lost impetus, struggling to recreate its Spa glories and failing to score another point all season. Fisichella didn’t have a much better time of it, unable to get to grips with a difficult Ferrari F60. He too ran out the remainder of 2009 pointless, retiring at the end of the season.

That 2009 Belgian Grand Prix also turned out to be Phillips last race with Force India, the Commercial Director being the victim of a personality clash with new owner Mallya.

“The day after Spa, Mallya effectively sacked me,” he recalls with a wry laugh, “A lot of people came up to say well done (after the race), and then there was a particular moment, which I’ve got a photograph of, with Fisichella and I having a big hug when we finally got together.

“And over his shoulder, I could see Mallya looking at me – unimpressed. We didn’t get on.”

In spite of the pain of leaving a team he had spent two decades devoted to, Phillips overriding memory is still one of joy at securing such a remarkable result.

“We’d been through some tough times. It was just the fact that essentially the same people that stuck with it all the way through, it was sort of fulfilment of the fact that we still believed in what we’d been brought up to believe. And you know, that’s it, end of chapter.”