One of the greatest technical directors and designers of his Formula 1 era, Adrian Newey conjured up formative solutions to the rapidly encroaching F1 rulebook.

Here are four of his most inspired innovations – for more, pick up a copy of the February issue of Motor Sport. 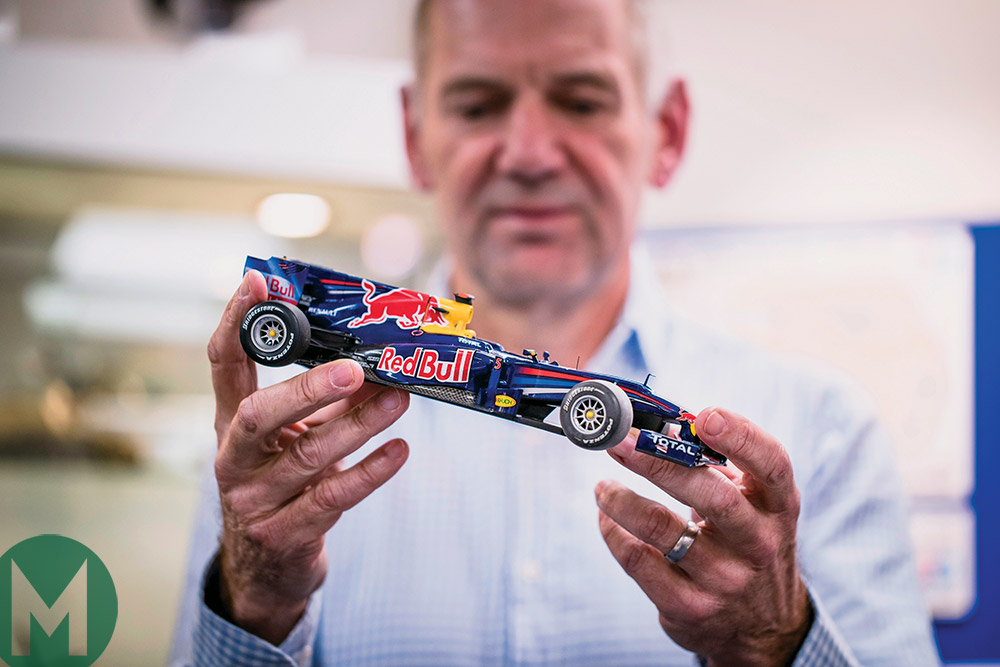 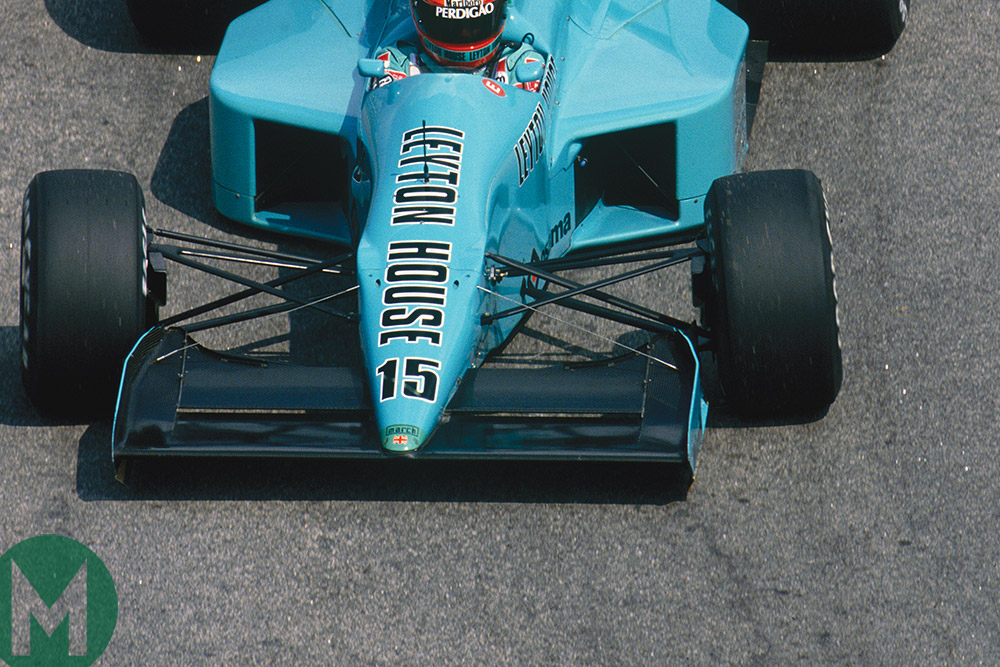 With a combined nose/wing, downforce was being created across the whole width rather than just from the two separate wings bolted onto a central nose. As an extension of that, undercutting the nose on the underside lowered the air pressure there, the air rushed to fill the vacuum, pulling the flow over the wing faster. “I didn’t think to go as far as Jean-Claude Migeot later did with the Tyrrell [019] when [by lifting the driver slightly] he undercut the whole keel [rather than just the nose], but aerodynamically I think the March was better than anything out there at the time. F1 cars at that time had become very unsophisticated aerodynamically.

It was actually more sophisticated in Indycar where I was working at the time because everyone had pretty much the same power unit whereas F1 in the turbo era people had been finding more and more power which meant that drag wasn’t that important, so the cheap and easy way was just to put ever greater wings on the things. They tended to be somewhat inelegant as a result. IndyCar heightened my realisation that aero was the key.” 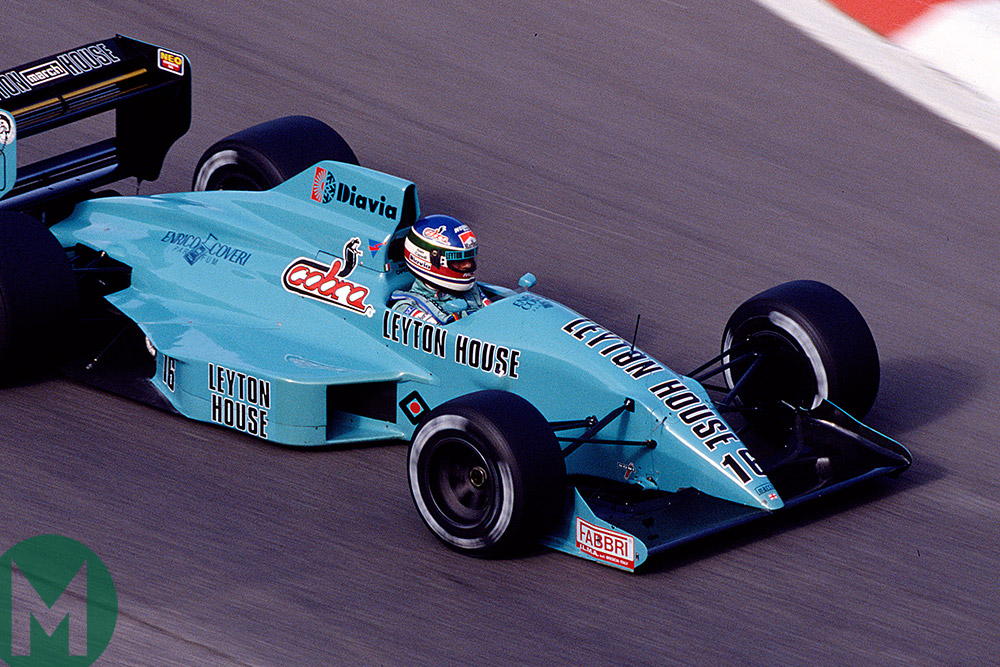 Before the 881, front wing endplates were flat across their height and width which meant that as the wheels were steered it changed the gap between the endplate and the tyre, giving an inconsistent airflow. Newey sculpted the shape of the plates to keep that gap consistent as the wheels were turned. “I guess I’m unusual in being a race engineer, an aerodynamicist and a mechanical designer.

In those days I don’t think anyone was bothering to steer the wheels in the wind tunnel. If you’re an aerodynamicist spending all day in the tunnel you might forget that steering actually happened! Whereas I’d be at the track with Mario, watching him come in and out of the pits, working with the driver in trying to understand what the car was doing around the lap. The train of thought that led to the sculpted plates came from talking to Mario, one of the greatest drivers ever, and understanding what he needed out of the car.” 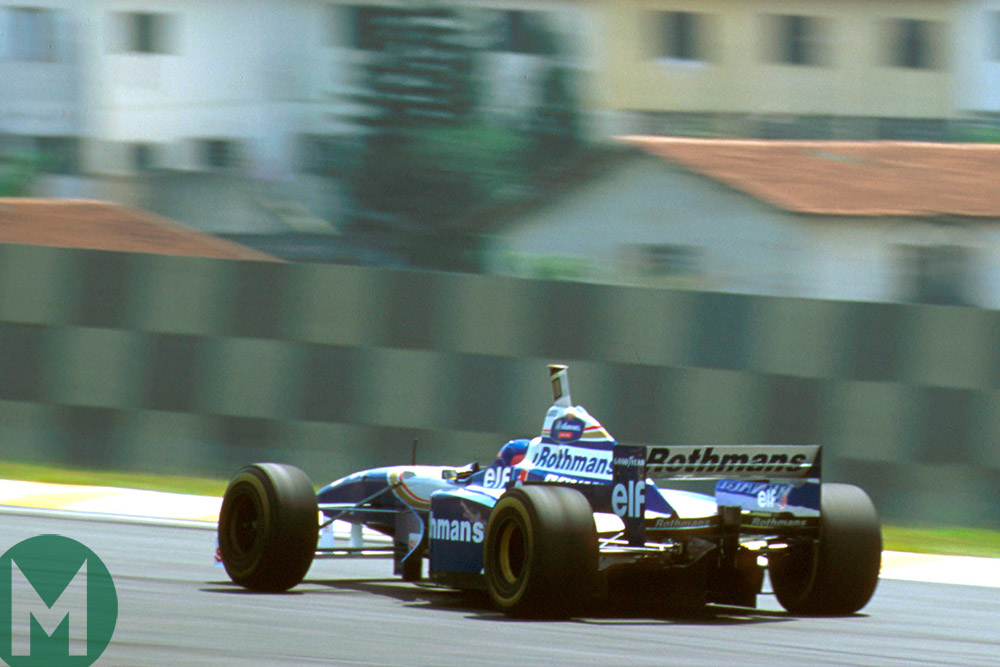 The FW18 had a massive aerodynamic advantage over the rest of the 1996 field by dint of a diffuser that was undercut so as to go up over the exhausts rather than beneath them, giving a hugely enhanced diffuser exit area and flow volume.

“This was another one of those reading the rules carefully to see if there was a way of doing what you wanted rather than what they wanted. I realised that although the reference plane specified a width and the step plane had to be 50mm above that at each side, at no point did it say the step plane had to extend to the rear axle, like the reference plane did. It meant you could consider the step plane ending at the edge of the rear wheel. It meant there was this grey area where you had freedom to cut in above the reference plane to give a much bigger diffuser exit. The diffusers were very exit-limited and by undercutting it we got a huge advantage by drawing so much more mass flow through it.

“We actually introduced it on the FW17B at Estoril late in the ’95 season. I thought that was the worst possible time to introduce it because everyone would see it and copy it for ’96. But somehow they didn’t.” 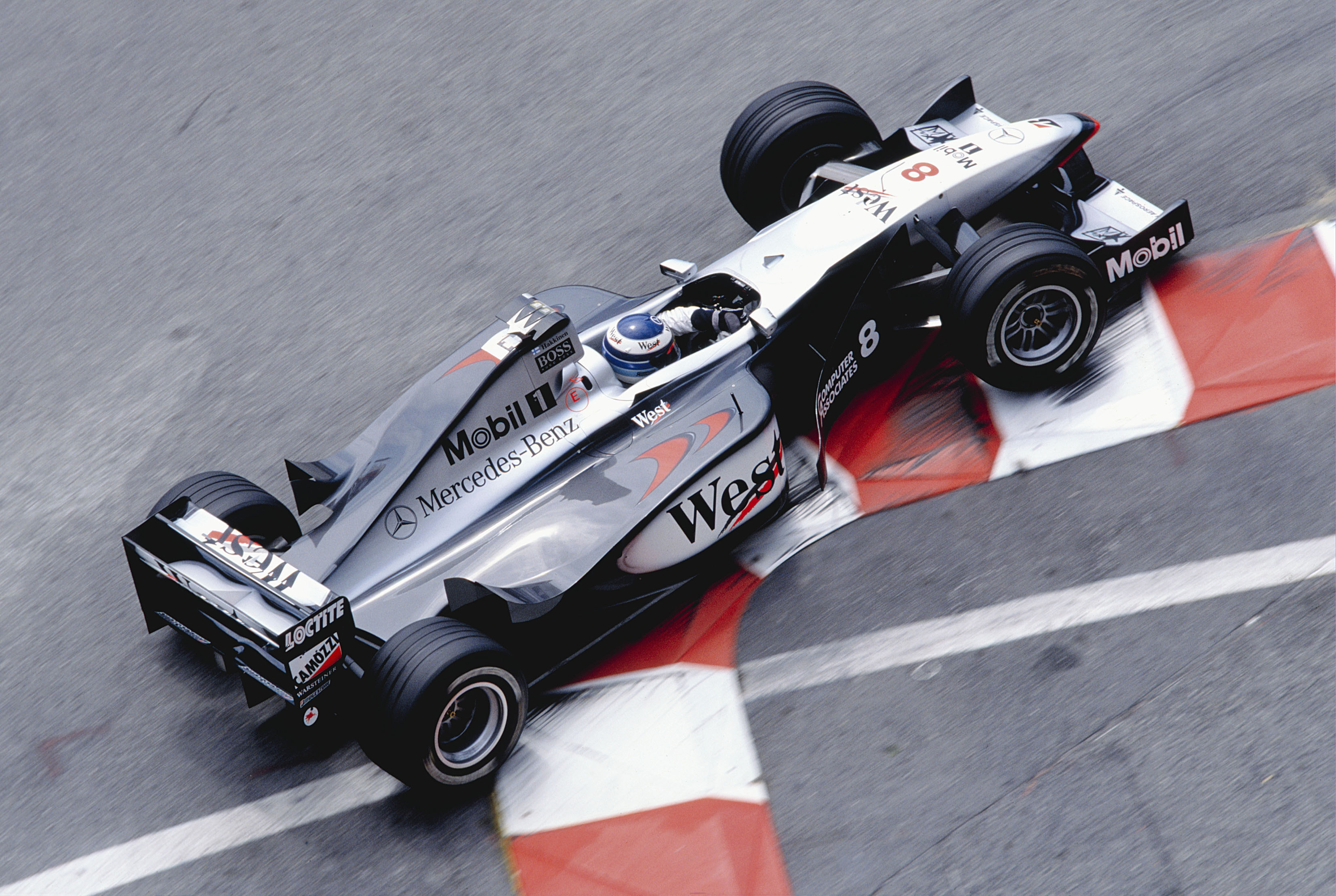 The 1998 McLaren was an amalgam of Newey’s own ideas during his gardening leave from Williams and research already conducted by McLaren on how best to configure a car for the radically different regulations that demanded a reduction in width from 2-metres to 1.8 and the introduction of grooved tyres.

“I didn’t have any data to back up my initial thoughts – because I was working from my bedroom – but I felt that lowering the centre of gravity would become crucial because the narrow track would bring more weight transfer and the grooved tyres would be less consistent as the grip co-efficient would fall away more as loads went up. So you’d need to minimise weight transfer as much as possible. I started working with Mario Illien at Ilmor in secret, to get the crankshaft height down because that not only lowers the whole engine but also the gearbox internals. A low seating position obviously became important because if you could get the driver’s upper body lower, then you could lower the surrounding structure, the roll hoop etc. Then visibility becomes a problem. Another regulation change that year was go to a box chassis where the regs called for a certain width and bulk of chassis at front bulkhead and a certain width and bulk at dash bulkhead and a linear taper in between. Although the drawing [in the regs] showed a rectangular box, it actually said depth. It didn’t say it had to be a rectangle.

“One of the guys working at McLaren when I started there had spotted that and had proposed effectively making a very shallow chassis in height then putting a couple of fins up the side to legalise it. But I felt that wouldn’t be legal because it said depth. In the middle you wouldn’t have had the depth. But potentially what you could do was create something not unlike Batman with the two triangular ears sticking up at the top and the bottom chamfered. So at any given point across the width it complied with the depth – but wasn’t a simple rectangle. 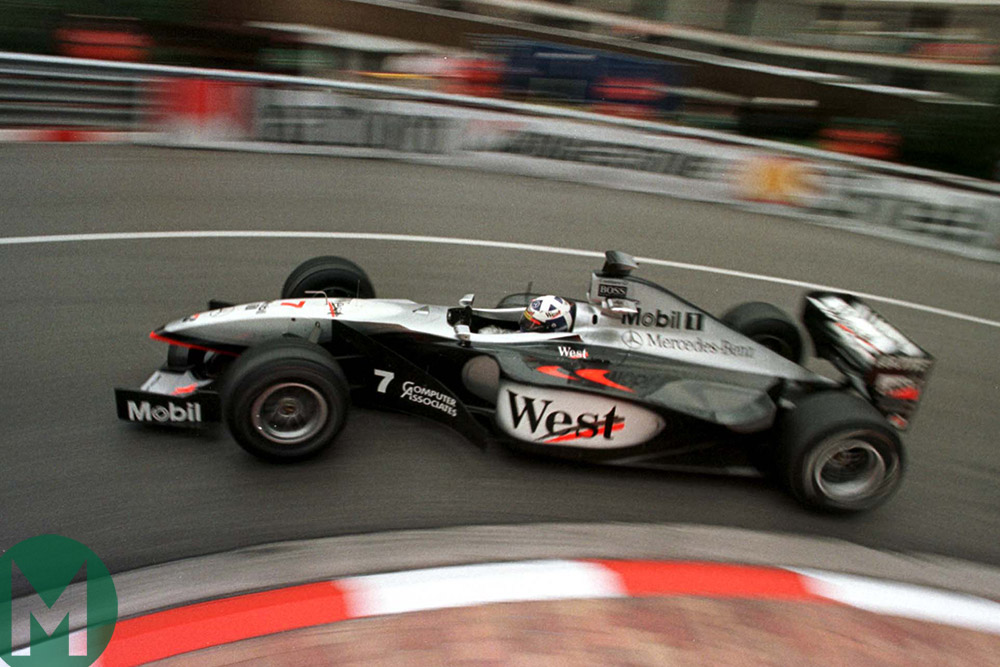 “So there seemed to be a loophole. You could get straight ahead visibility by dropping the chassis down in the middle and still be legal. So then we started working with David Coulthard. It was him who said, ‘My vision is binary; I’m either looking straight ahead for the braking area or I’m looking diagonally across at the apex.’ So we could put these fins in the bits in between without really bothering the driver. That’s what led to MP4-13 chassis which was a good step.”

Related: “Give me Adrian Newey and we don’t need the best driver to win.” 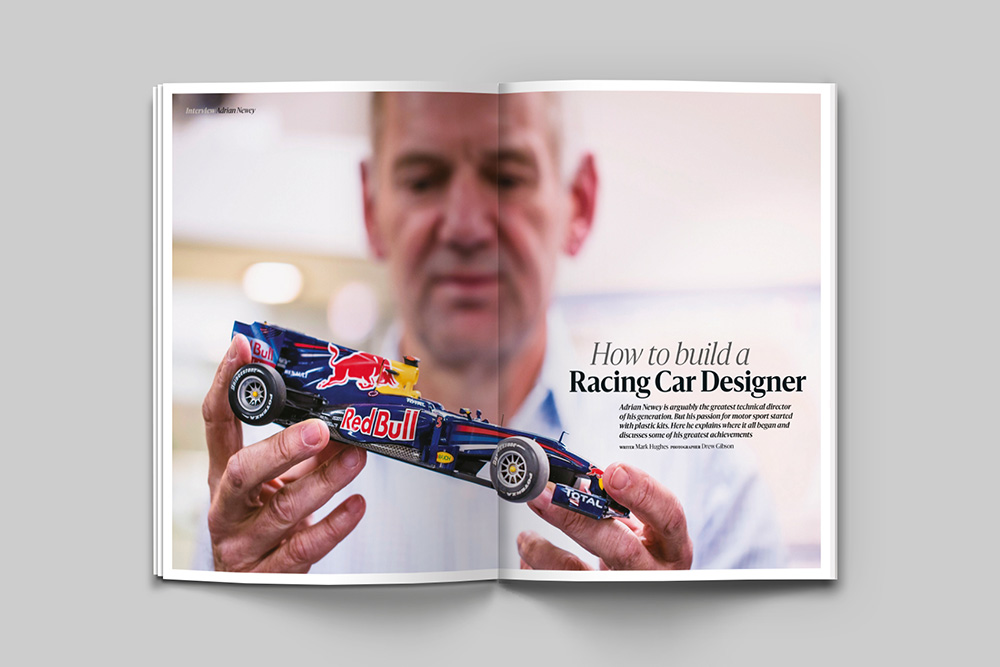