As the 2022 regulations were being formulated, there was much chatter that the cars would all end up looking the same, bar small detail differences unnoticeable to most fans. It wasn’t just the press that held this opinion. On first look, many team engineers were thinking along similar lines. Speaking back at the end of 2019, Haas’s Ben Agathangelo suggested that all that would be available to teams was ‘macro evolution’ within the surfaces prescribed by the rules.

Fortunately, two years later, that has not proven to be the case. One only needs to look at the sidepods of the cars to see how diverse the concepts are across the field. From McLaren’s approach of relatively chunky sides placed high up above the floor, with all of the cooling air exhausted out of the back, to Williams’ size zero approach, replete with optional panels and a sculpted outlet in the upper surface. 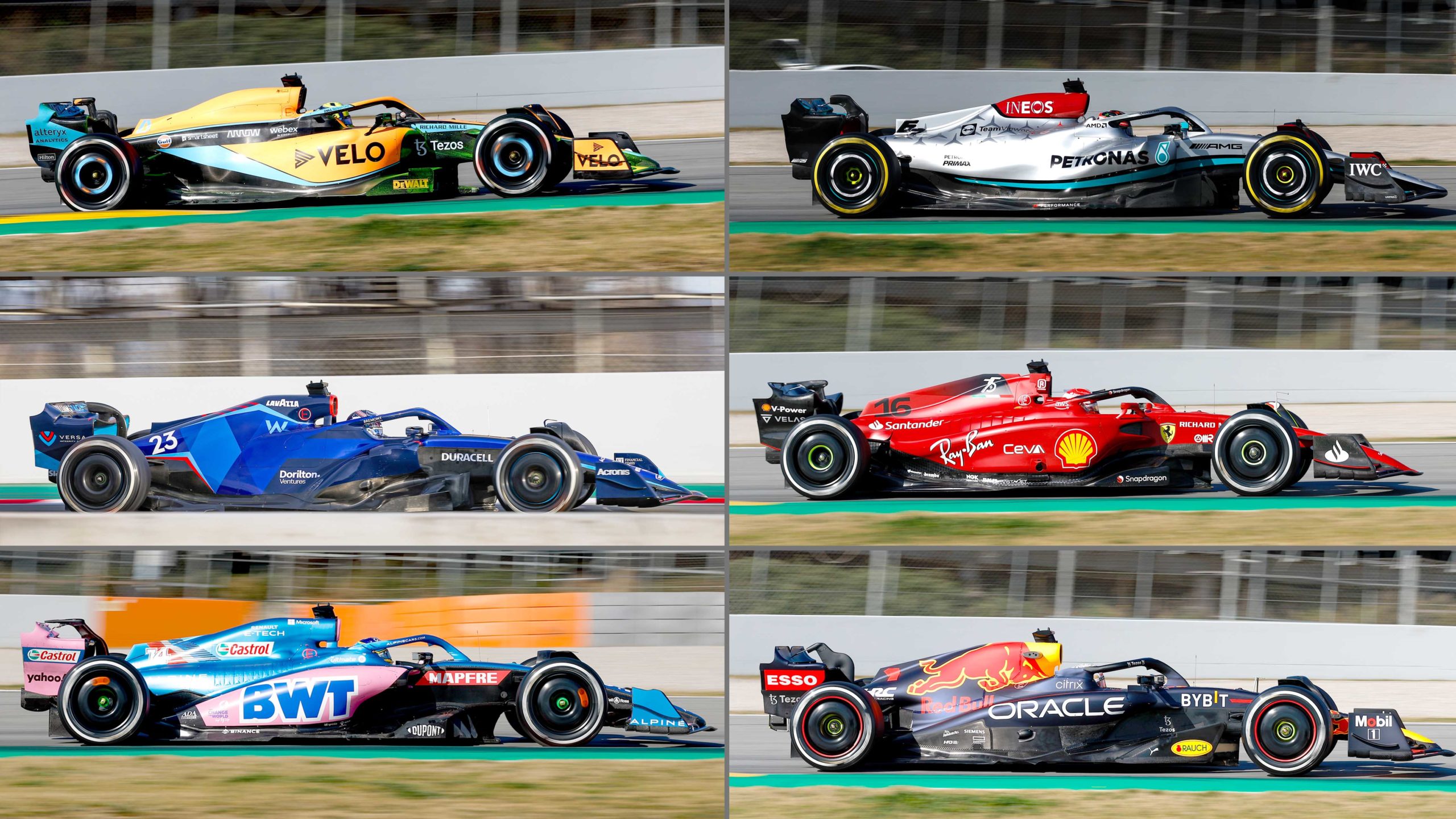 While the main function of the sidepods is to house the cooling radiators for both water and oil, they do have a significant impact on a car’s aerodynamics. For example, the interactions between air flowing from the nose to the cooling inlets, and over the upper floor to the top of the rear diffuser are of vital importance to maximising the performance of the underfloor. One only has to look at the almost organic shape of the Mercedes floor to see that huge effort has gone into finessing these flow structures.

There is also the challenge of dealing with the hot air exhausted from under the bodywork. Hot air is less dense, and having flowed through the coolers has less energy than that coming over the body. All of which can have an impact on elements such as boundary layer conditions (where the layer of air directly adjacent to a surface tends to cling to that surface, making flow separation more likely). 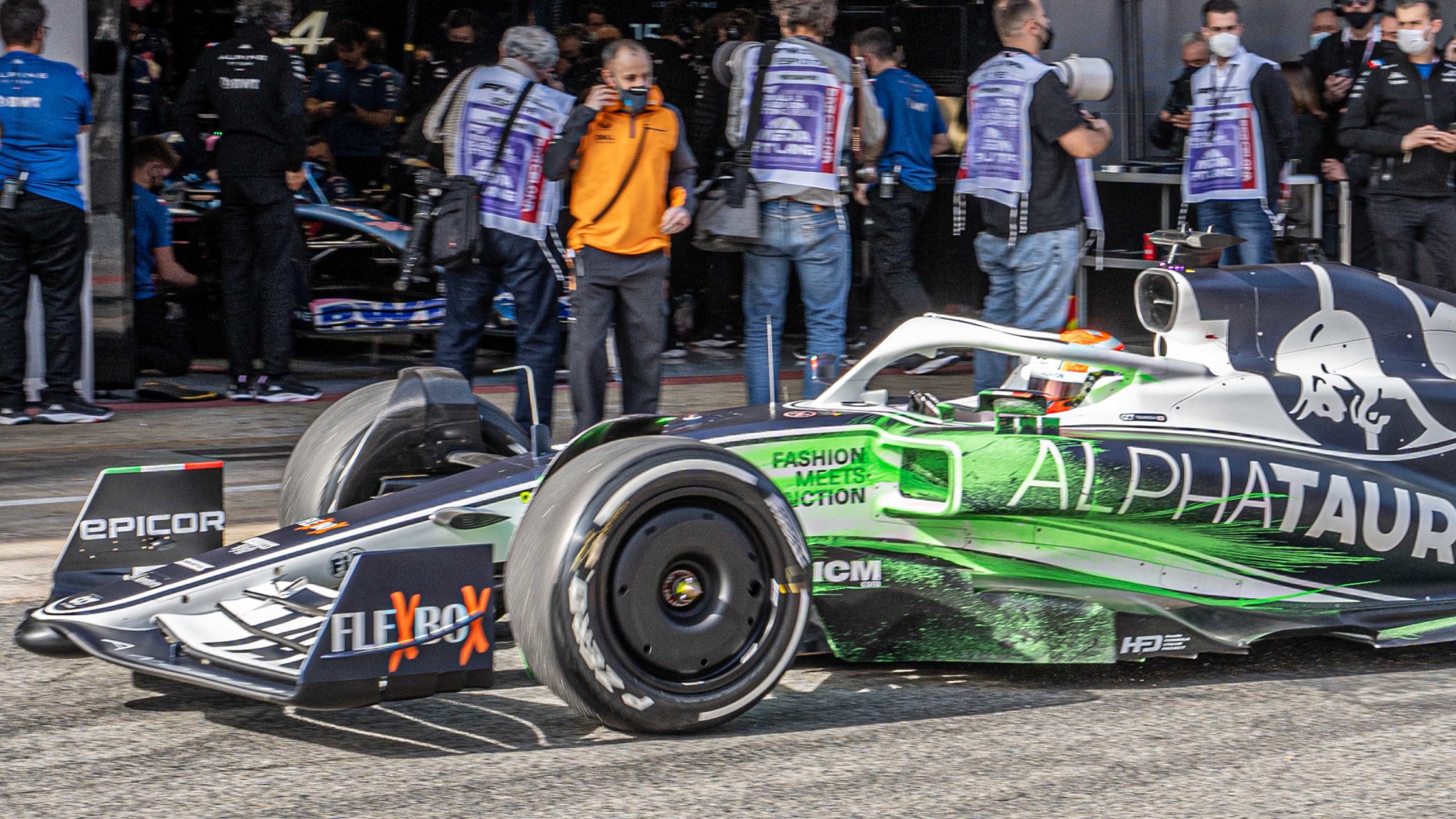 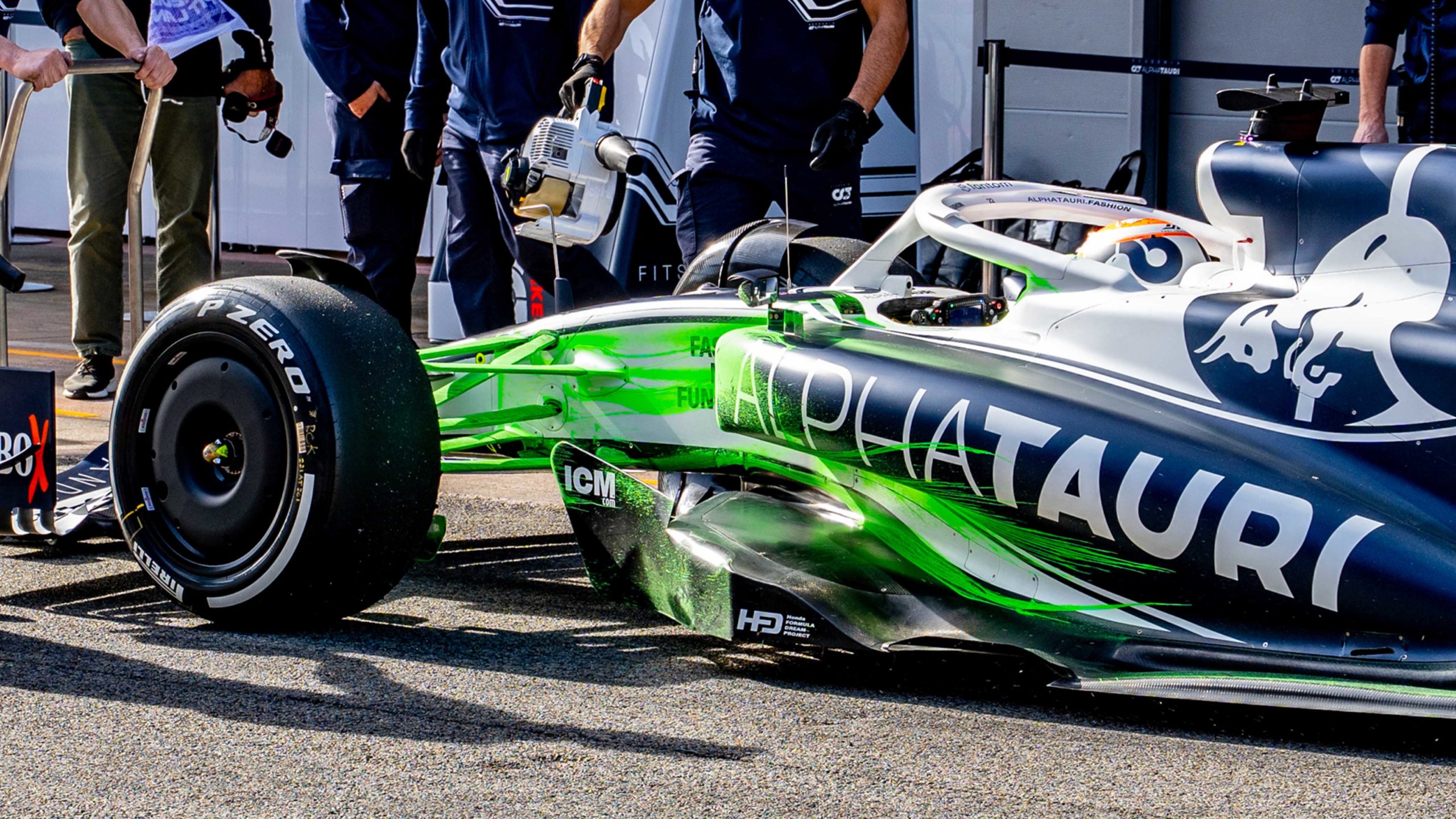 It is quite possible that teams will change their concepts as the year progresses, and Ferrari admitted that is had left leeway in its design to do just that. But with the constraints of a cost cap to consider, repackaging a sidepod, with new  coolers and other ancillaries, could easily eat up a sizeable chunk of resources.

Much like 2017, when new aerodynamic regulations saw teams running a plethora of front wing  designs, 2022 is no different. A number of areas of the wings are prescribed by regulation, for example the end plate is to all intents and purposes fixed in its design and placement, and teams are limited to four elements. However; within these constraints there is clearly scope for aerodynamicists to show some flair and no two teams seem to have taken the same approach.

Obviously, the front wing sets up the flow structure for the rest of the car and is thus intrinsically linked to the overall aero package. This is why you see cars running the large aero measurement rakes during testing. These provide real world data used to validate the results teams have seen in the wind tunnel and CFD (computational fluid dynamics). 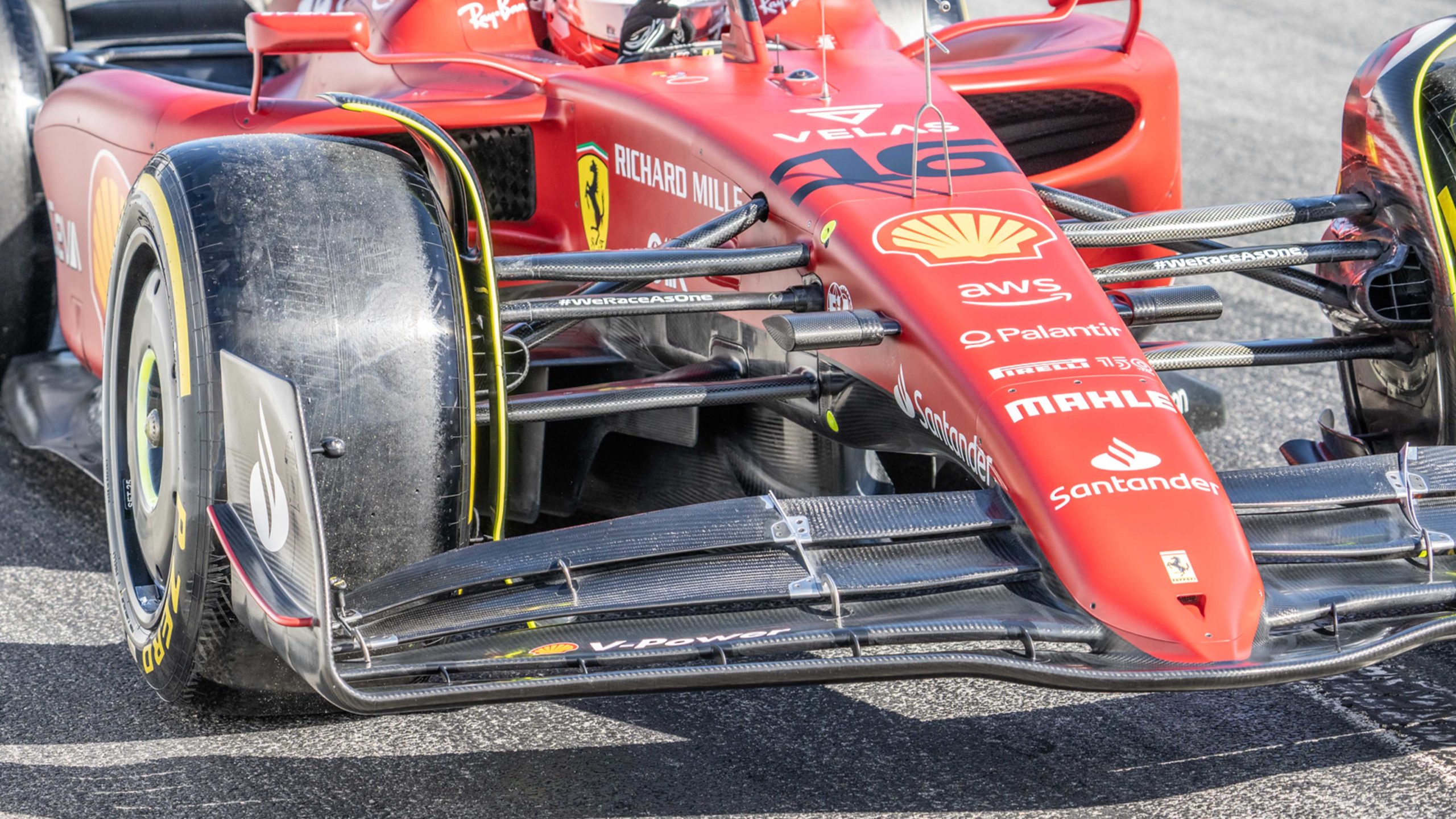 Whether we will see convergence one particular layout as the cars evolve over the season remains to be seen. With such diverse car concepts, this is far from a given. For example, some teams (such as Ferrari and Mercedes) have the nose extending far forward and sealing off all of the wing planes, while others have left the lowest plane separated from the nose.

It should be noted that in Ferrari’s case, it has developed a clever solution whereby the section sealing the nose/wing is a separate part to the nose crash structure. This means the design can be modified without affecting the main nose, which would necessitate re-homologation and crash testing.

In all of the noise around the new aero rules, it has gone somewhat unremarked that Alpine has a brand-new power unit from parent company Renault. The French manufacturer’s engineers in Viry have followed the lead set by Mercedes in 2014 and adopted by Honda in 2017, in splitting the turbocharger element of its MGU-H.

This sees the compressor placed at the front of the engine and the turbine at the rear, with the electrical motor generator sandwiched in the vee of the engine. Previously, the entire assembly was housed at the rear. 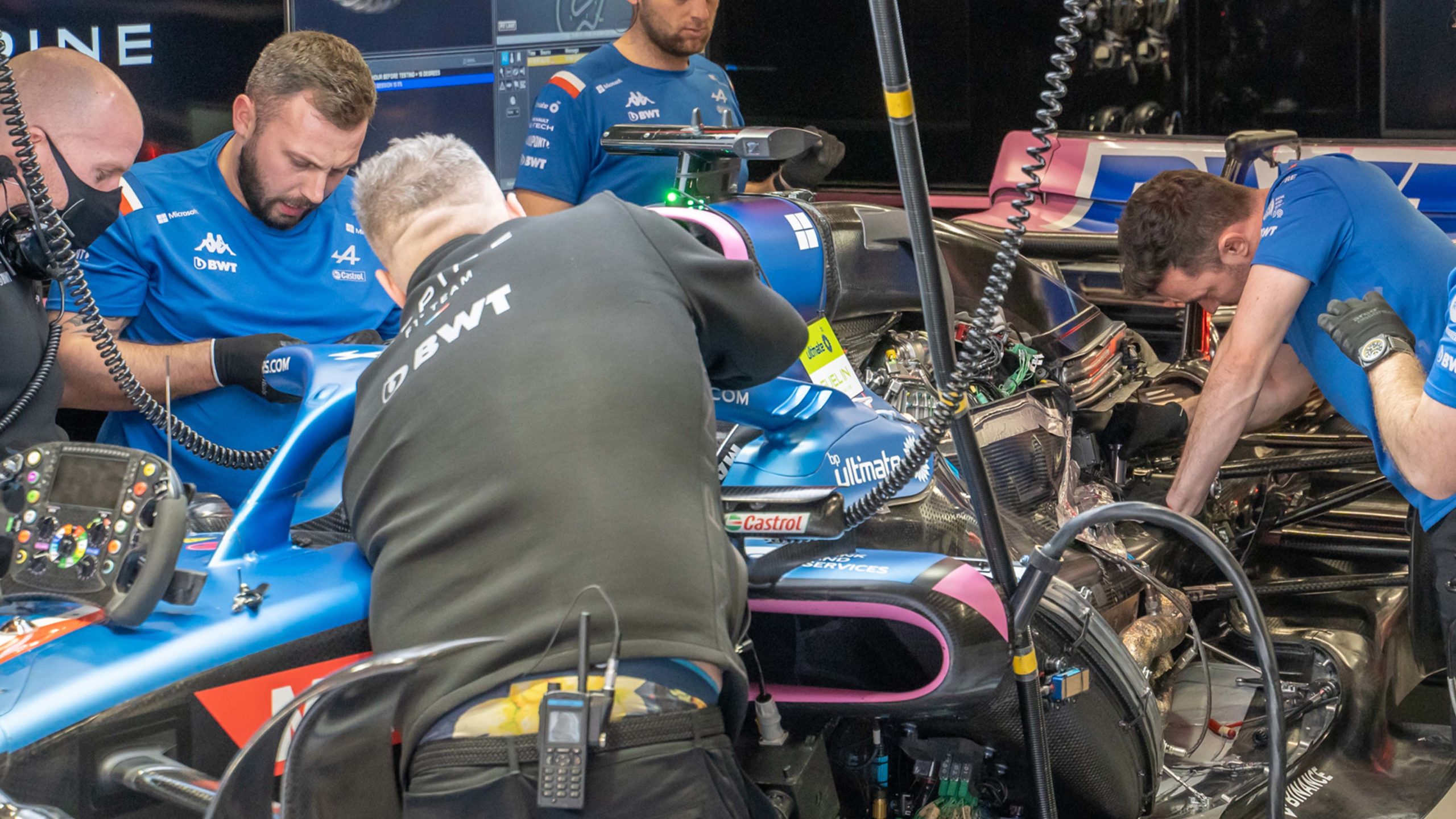 There are numerous benefits to this layout, not least it allows for a larger compressor to be fitted (with, relatively speaking, more space in the centre of the tub), which also means a more efficient compressor. The current F1 engines run incredibly lean and require a huge mass flow of air when running at full power. With an rpm limit on the MGU-H of 125,000rpm, the only way to shift more air is a larger compressor wheel. 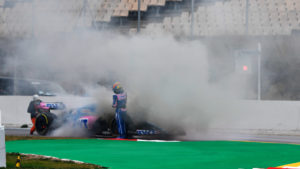 However, the split turbo approach is far from straightforward to implement. The turbine, MGU and compressor sit on a very long shaft, and keeping long (thus flexible) shafts alive at high RPM is never easy, any untoward vibrations or odd harmonics will quickly cause carnage (just ask Honda). If it can pull it off and achieve reliability, the team should reap the rewards of its efforts with greater power and efficiency, and likely packaging benefits at the rear of the car.

The cloud of smoke around the car, which brought an early end to Alpine’s final day of testing in Barcelona (above), is a warning of a tumultuous season ahead if the team can’t get it to work, although in this case, the team said that it was down to a hydraulic issue.

One of the biggest talking points of testing has revolved around aquatic mammals, or more specifically, how the latest crop of cars resemble swimming porpoises at high speed.

Watching the new machinery run down the start finish straight in Barcelona, it was abundantly clear that some drivers were having a decidedly bumpy ride as their cars pitched (in some cases pretty violently) back and forth.

The phenomenon, fittingly called porpoising, is caused by the car effectively bottoming out as downforce increases, which stalls the floor. This causes a rapid loss of downforce, allowing the suspension to extend to the point where downforce returns and the process begins again. If this occurs in tune with the natural frequency of the car’s suspension, a vicious cycle is setup, leading to porpoising.

Bumpy road to the top for Charles Leclerc! 🤕#F1 pic.twitter.com/Z6a5e6d3bo

This has not been an issue in F1 for the past few decades due to the design of the cars, though it was a problem back in the last ground effect days, when understanding of both aerodynamics and suspension control of the aero platform was far less refined. However, one only has to go back a few years to see it occurring in sports car racing, both Audi’s R18 LM P1 suffered from it in certain configurations and the Nissan GT-R LMP, on the rare occasions it ran properly, pogoed its way around Le Mans. 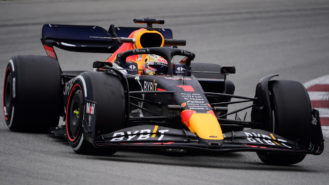 Ferrari team principal Mattia Binotto observed that his team had predicted it may be an issue but was surprised at how pronounced it was once the cars hit the track. It must be remembered that powerful as teams’ simulation and modelling capabilities are, there will always be phenomenon that wont be fully resolved in the wind tunnel and CFD, and track testing reveals all.

Unfortunately for teams, two tools that could have helped them fix the problem (or avoid it in the first place) are banned; inerters and front to rear interconnected suspension systems (FRICS). Both of these allow for greater control of the cars attitude and thus aerodynamic platform in pitch and roll, independent of the suspension’s bump compliance. They were banned in the name of cost saving but one has to wonder how much will now need to be spent fixing the porpoising issues? Binotto felt some would overcome them by the first race, but problems with aero stability, linked as it is to both a car’s aerodynamic and suspension design, can be notoriously tricky to banish.