It’s the heated racing row which has rumbled on for decades: who really designed the McLaren MP4/4, the most successful Formula 1 car of all time?

Members of the Woking team have hit back at recent claims from Gordon Murray that he deserves full credit for designing the car, which won 15 out of 16 races in the hands of Ayrton Senna and Alain Prost during its crushing 1988 season.

Murray was damning when giving an interview in our September issue. “I led the design team. I’m sick and tired of other people living off my reputation,” he said, saying that the suggestion Steve Nichols was chief designer “is the biggest load of rubbish you’ve ever heard”.

The response from senior design engineer Matthew Jeffreys was no less acerbic. “I can only imagine Gordon and the rest of us in the design team were living in parallel universes, as his version of events is not the same as mine, or indeed any of my former McLaren colleagues I have spoken to on the subject,” he wrote in a letter published in our October 2021 issue.

“Gordon is a great designer and has produced some wonderful cars in his time but not giving due credit to Steve for the 4/4 is unfair to him and to many people throughout the team who worked incredibly hard and achieved so much that year.”

What has appeared to add further fuel to the fire is that both Murray and Nichols have now launched cars that draw on their F1 achievements – the former with the GMA T.50 – a McLaren F1 successor – and the latter with his reimagining of Bruce McLaren’s first competition car, the M1A (Nichols’s dubbed the N1A).

“It’s not really aimed at me, it’s aimed at his investors – the people who have paid big deposits on his T. 50” Steve Nichols

In letters shown to Motor Sport, Murray has threatened Nichols with legal action, asserting that his car company and its V12-powered, fan-assisted T.50 supercar depends on his reputation as the MP4/4 designer.

On his own Nichols Cars website, the American says similar in that his firm’s credibility and his lightweight V8 N1A car rests on his claim to designing the McLaren. One selling point is that buyers, sat in a reclined seating position, will “get an idea of what Senna and Prost experienced in the MP4/4.”

Nichols seems in no doubt that Murray’s own new car company may have encouraged him to further stake his claim in the car’s creation.

“I’ve had two letters from him now telling me to cease and desist from claiming that I designed the MP4/4, saying that he’s making his living now on his reputation with his car company,” said Nichols, speaking to Motor Sport.

“And you can see that it’s not really aimed at me, it’s aimed at his investors – the people who have paid big deposits on his T. 50.” 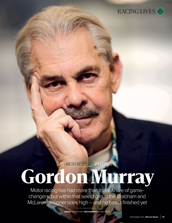 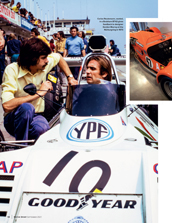 Whilst Nichols’s car is based on an older period of McLaren’s history, he still leans heavily on his ‘80s McLaren experience to market his rarefied product.

“Having headed the design team at McLaren during arguably their most successful period ever, I’m a McLaren man through and through,” he says on his website. “With the Nichols N1A I’ve gone back to the very first McLaren for inspiration, combining elements of its classic lines with modern engineering for a car of extraordinary performance and presence.”

Murray’s reputation was already sky-high when he left Brabham at the end of 1986 after producing two drivers’ championship-winning cars, and innovations that included the infamous fan car, as well as the tilted engine of the troublesome BT55.

He joined McLaren to replace John Barnard and was appointed technical director with wide-ranging responsibility for the Formula 1 team, but what that actually meant in terms of involvement is where recollections differ.

Nichols said that he was tasked with the car that would go on to deliver Ayrton Senna his first championship — said to have been confirmed in a memo that was sent round to senior staff.

“Gordon wrote some job descriptions, he didn’t interfere with the designing of the F1 car” Nichols

“Gordon wrote some job descriptions, he didn’t interfere with the designing of the F1 car and backed up the fact that Ron had appointed me as the chief designer.”

Nichols says the relative lack of input from Murray was actually what the McLaren design team desired.

“We’d been under John’s strict rule, and I think we all used this as an opportunity to break out a little bit, to do some of the things that we wanted to do. It was a well-oiled team, we respected each other and we thought in the same way. Things just rolled out in a coordinated sort of way, because there weren’t a lot of ego.”

Nichols says he worked on the monocoque (developed from his MP4/3), overall layout and integration of the car whilst Jeffreys focused on the front-end of the car and its integrated front suspension. Bob Bell handled the aerodynamics and Pete Weismann was brought in to oversee the gearbox.

What resulted was a low-lying rocket powered by the Honda 1.5L V6, which would go on to be the most successful F1 machine of all time, taking both drivers’ and constructors’ titles before being superseded by Oatley’s design.

In the years following its immense success, Murray has claimed credit for the car himself, in particular rejecting suggestions that it was Nichols’s overarching concept.

The first instance of this happening came in Ian Bamsey’s book on the fabled McLaren, which credits Murray as the mind behind it and led all 17 members of the car’s design team to write a letter (detailing no less than 82 inaccuracies) arguing against it to then-newly appointed McLaren manager Martin Whitmarsh. The debate has gradually intensified up ever since.

“What’s been a particular gripe of ours is that Gordon’s seems to want to perpetuate what we consider to be basically a myth, that he was responsible for the design, when actually he had very little to do with the car,” says Jeffreys.

“I think he is very concerned about his reputation and legacy. I don’t have an axe to grind with Gordon. I’ve always got on with him very well. It’s only when he comes out and kind of insults everybody who worked on projects that he said was all down to him, that you think, ‘Oh, hang on a minute. Why are you saying that?’”

In addition to wanting to promote his T.50, Nichols suggests there is another good reason why Murray is persisting with his claim in the creation of the MP4/4.

“Every great designer has the odd faux pas – even Adrian Newey, who I consider the greatest race car designer of all time,” he says. “His McLaren [MP4-18] had so many problems it never ended up racing. But he’s had so much success since, he seems to have expunged that from his record, no-one remembers it anymore. 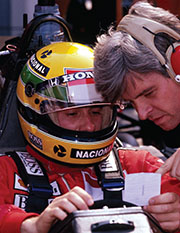 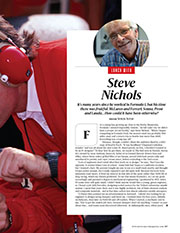 “Gordon had the Brabham BT55, which was by any standard a terrible car. He’s got that blot on his copy book. So now I think he feels the need to claim credit for the MP4/4, to expunge the BT55 off his record. You can see what he’s trying to do there.”

Jeffreys says he has had similar experiences to Nichols with regards to threatened legal action, including one such incident involving the McLaren MP4/4 Owners’ Workshop Manual written by Steve Rendle.

The book is an exhaustive look at the grand prix car, interviewing all 17 members of the design team, as well as senior figures such as Dennis and Murray, who corroborated the views of Jeffreys and Nichols, at least for a certain period.

“Steve and I did a talk at Brooklands on the MP4/4,” Jefferys remembers. “We became aware Gordon had turned up and was in the back of the room. He didn’t say a word throughout the talk.

“At the end came along and presented us with two letters threatening us with the kind of stuff he said in your interview, to cease saying all these lies we said in the Haynes book, which we found surprising because the letters could have been written by us and given to him!”

“Part of our problem is that when the legendary and mighty Gordon Murray says something, people listen, us less so because we’re not ‘legendary’ in the public eyes.

Murray often cites the problematic BT55, which scored two points and racked up 19 retirements – as the initial inspiration behind the MP4/4, but both Nichols and Jeffreys refute this, explaining why any association is superficial, as well as citing the illegality of copying another car.

“None of us were looking at BT55 drawings and we wouldn’t have wanted to be either – it was a disaster,” says Jeffreys. “Why would we want a McLaren to have copied a car that had huge problems and was also two years old?

“If you also look at the MP4/3 [also designed by Nichols] and MP4/4 you can one is a development of the other – the backend is virtually identical.”

“Gordon says ‘Compare the two cars [BT55 and MP4/4] together, you’ll see they’re almost exactly the same,’ adds Nichols. “When you look at those two cars, they’re nothing alike.

“It was the ultimate expression of teamwork” Nichols

“The only similarity is that they were both low. But if you look at anything else – the rules were different [and therefore] the fuel tank size was different, the drivetrain was different, different engine, different gearbox – everything.”

Despite the wrangling, Nichols still enthuses on that period of McLaren’s history. “It was just so rewarding,” he says. “The idea of teamwork worked so well. Everybody was so good on every level, not just the drawing office and engineers.

Gordon Murray did not take up the opportunity to add to his earlier comments.