It is with some trepidation that we step back into the debate on Lewis Hamilton vs Max Verstappen this week. Ahead of the unloved Russian Grand Prix – hands up who will miss Sochi when it slips off the calendar in 2023 to be replaced by a new track in St Petersburg? – the focus still falls on a slow-speed kerfuffle between a couple of hard-heads. Should it? Well, yes. After all, it is kind of a big deal when there’s a world championship at stake, the whole world is watching and these two are putting their lives on the line. Is that over-dramatic? Well, no. Hamilton’s ‘halo’ moment was a timely reminder that it doesn’t have to be a flat-out shunt at Copse or Eau Rouge/Raidillon for consequences to be potentially awful, as these two prepare to go toe-to-toe through the autumn.

You will all have your opinion on Monza, and perhaps have already shared it on forums, on social media and even, dare I say, face to face given that the pandemic appears to be ‘officially over’. OK, we all know that isn’t true, but what a strange world of erratic face mask and social distancing etiquette we live in at the moment.

If anything, the Hamilton-Verstappen rivalry is a dose of normality during a time when pretty much every other aspect of our lives is skewed, distorted and more than a little disturbing. There’s much that is familiar about this sporting battle between two wonderful racing drivers who couldn’t be more different as personalities. At its essence, it’s a simple, straightforward head-to-head between two competitors who find themselves regularly sharing and vying for the same field of play. It’s the complexities of their personalities and the nuances of each moment that make it properly compelling. Which it is.

For all of Hamilton’s hero worship of Senna, he now has more in common with mid to late-era Prost

It’s becoming something of a cliché to draw comparisons to Ayrton Senna vs Alain Prost, the landmark duel that set F1 down the rocky path it continues to walk today. But clichés are created because of a fundamental truth and no matter how hard I try to think about other examples, in Hamilton vs Verstappen I keep coming back to the parallels (among the differences) to F1’s most vitriolic rivalry.

It’s strange though that for all of Hamilton’s childhood hero worship of Senna, at a well-rounded 36 and with all those racing miles under his belt he now has more in common with mid to late-era Prost: a principled racer with an admirable reputation for keeping it clean, and yet at the same time an instinctive competitor who refuses to be intimidated, whose patience has its limits and isn’t short of a few tricks of his own.

Prost tarnished his clean reputation at Suzuka’s chicane in 1989 when he chose to close the door on a relentless Senna and trigger a collision some considered inevitable, in a moment of fine margins. I’d argue Hamilton hasn’t yet crossed that same line, not even at Silverstone where he was the primary instigator of a fast and scary shunt for his rival. The intent, whether it was overly ambitious or otherwise, was purely to take the lead, not to cause an accident. It wasn’t a “tactical foul”, as Toto Wolff might put it. Prost at the Suzuka chicane? He knew what he was doing. 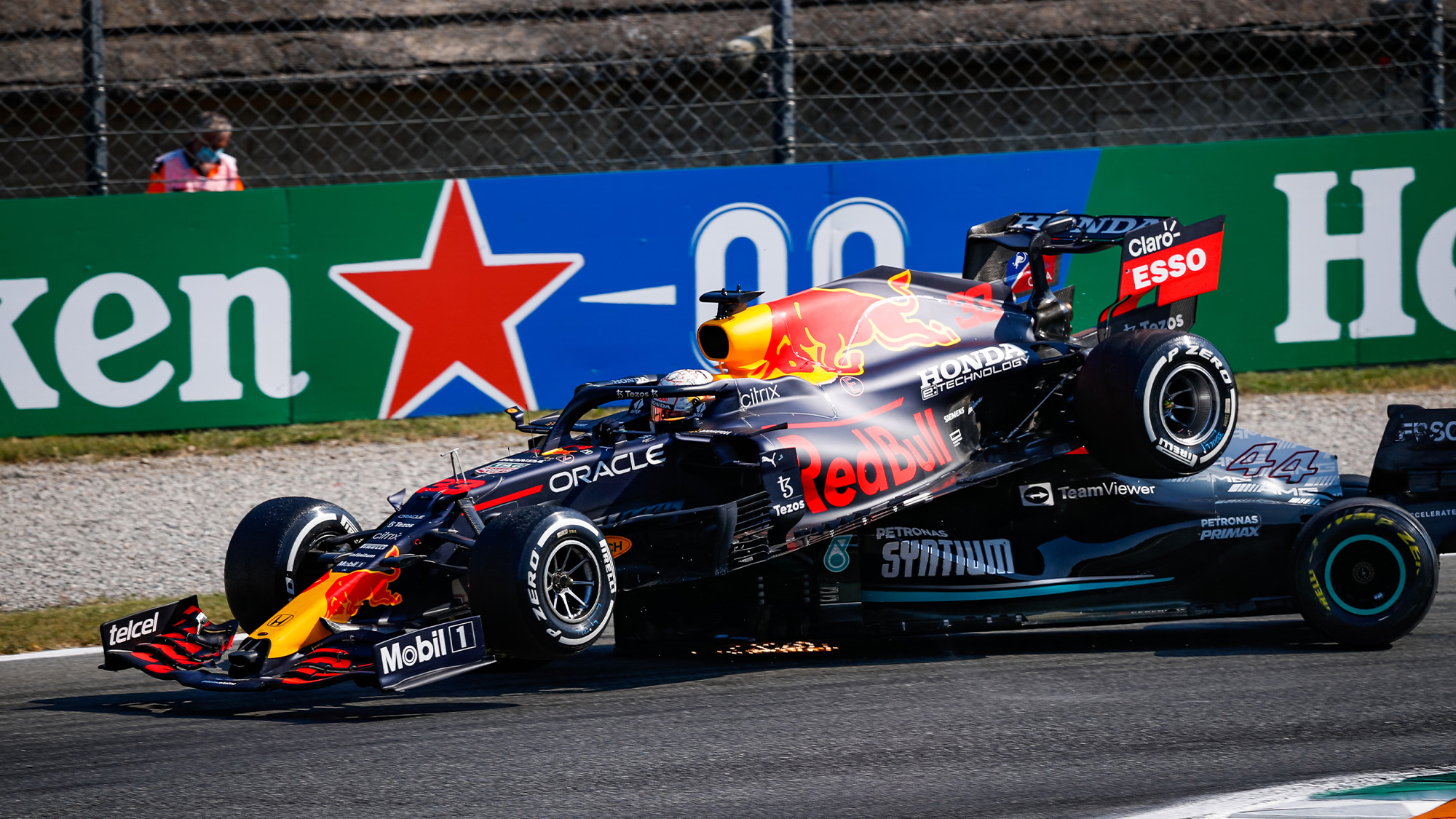 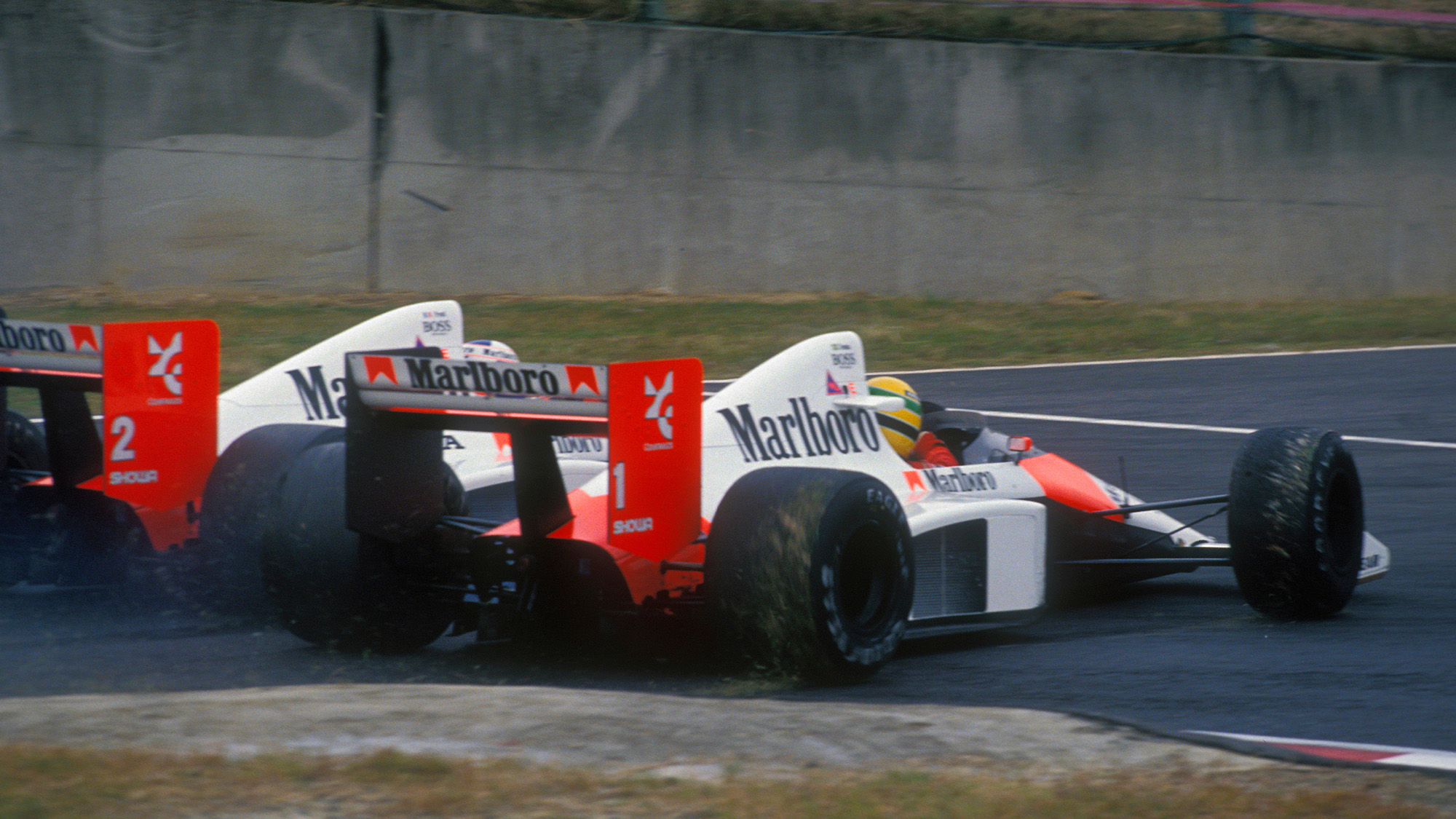 Prost took a deliberate swipe at Senna in Suzuka

At Monza two Sundays ago Hamilton found himself in similar territory to Prost at that Japanese GP, defending from an uncompromising aggressor at a silly, fiddly chicane. But again his behaviour differed from Alain’s all those years ago. Could Hamilton have done more to avoid a collision? My first thought on that was probably yes – but then as one former grand prix driver said to me the other day, do we really expect him to turn right at a left-handed corner? Unlike Prost, he didn’t choose a collision, but in the context of the shoe-on-the-other-foot moment with Verstappen at the della Roggia chicane on lap one, he wasn’t about to deviate from a line that was his to take. He didn’t do much wrong. Add in that chicanes are generally a rubbish idea and the Rettifilo is among the silliest, where exactly was Hamilton supposed to go?

So Verstappen is the Senna in this duel? Absolutely not in character, but yes in terms of his uncompromising approach to racing. He is so aggressive on track, much like the three-time champion but more directly because he’s a proper chip off his father Jos’s old block – although it would do Max an unjustified disservice to pigeon-hole him for this aspect alone. He’s too good, too bright, too talented to be written off as some raging bull. But as Senna was with Prost, it’s Verstappen who is the challenger. He’s the one asking the questions, testing the champion’s mettle and giving him a fight the like of which Hamilton hasn’t faced for years. And after so many seasons of Mercedes-AMG hybrid-era domination, thank goodness for Red Bull’s revival – and thank goodness too for Max Verstappen. He’s just what F1 has desperately needed. What a terrific distraction these guys are providing from the big things in our world that really matter.

These guys live on their instincts and in the moment. They can’t or won’t resist.

But the question lingers: what happens next between them? They share a brittle respect, but very little trust. Way back at the edgy season-opener in Bahrain, their duel came down to a clever piece of car placement from Hamilton who forced Verstappen to pass him in a way that led to a track limits violation. That won Lewis a race he looked set to lose, and it was judged on the right side of the hard-but-fair line that, for all the written and unwritten rules of racing that F1 drivers today must adhere to, is still defined by a matter of opinion. Back then we asked would this pair avoid getting sucked into the black hole that engulfed Senna and Prost for those two years in 1989 and ’90? It seemed they might keep out of its beam when sparks didn’t quite fly in their moments together at Imola and in Barcelona. It was as if they were doing just enough to keep out of reach of a gravitational pull they both knew would change everything for and between them – and neither wanted or needed the hassle. It was refreshing, all the way until Silverstone and the British GP when they were tugged into the maelstrom.

Sure, it would have been more original had they managed to fight a whole season without colliding – but such expectations were probably unrealistic, especially given the intensity of the increasingly toxic battle that has erupted between their teams. They have simply been fighting for the same piece of track too often to avoid each other.

But it’s their actions yet to come that will really count. Verstappen avoided serious injury at Silverstone, Hamilton had luck and the halo on his side at Monza – so what will be the story next time? Just five points separate them at this point. Nothing much has been lost, it’s all still to play for – and on the face of it there really doesn’t have to be a next time. But that old black hole has got them in its grip. The stewards and their penalties won’t be much of a deterrent and pep talks from their team bosses, who have a duty to cool rising temperatures when the need arises, will probably only go in one ear. It’s all down to Hamilton and Verstappen themselves on what happens next, at Sochi this weekend and beyond, all the way to Abu Dhabi in December.

But for all that gravitational pull, fate isn’t a thing – they have a choice. Then again, do they? The next time Verstappen hustles Hamilton into a corner, will Lewis make extra room in the interests of the bigger picture and after what has gone before? Verstappen surely wouldn’t, being the uncompromising man he is. These guys live on their instincts and in the moment. They know their own capabilities, how far they are willing to go and the total commitment that is required to win what is an utterly gripping and enthralling championship battle. They can’t or won’t resist. Whichever you pick, it’s likely to happen again.

We’ll always remember this one. But when it comes to the crunch, the telling moment that decides it, let’s hope we’ll remember it for the right reasons. So which way will it be, chaps? It’s all in your hands.