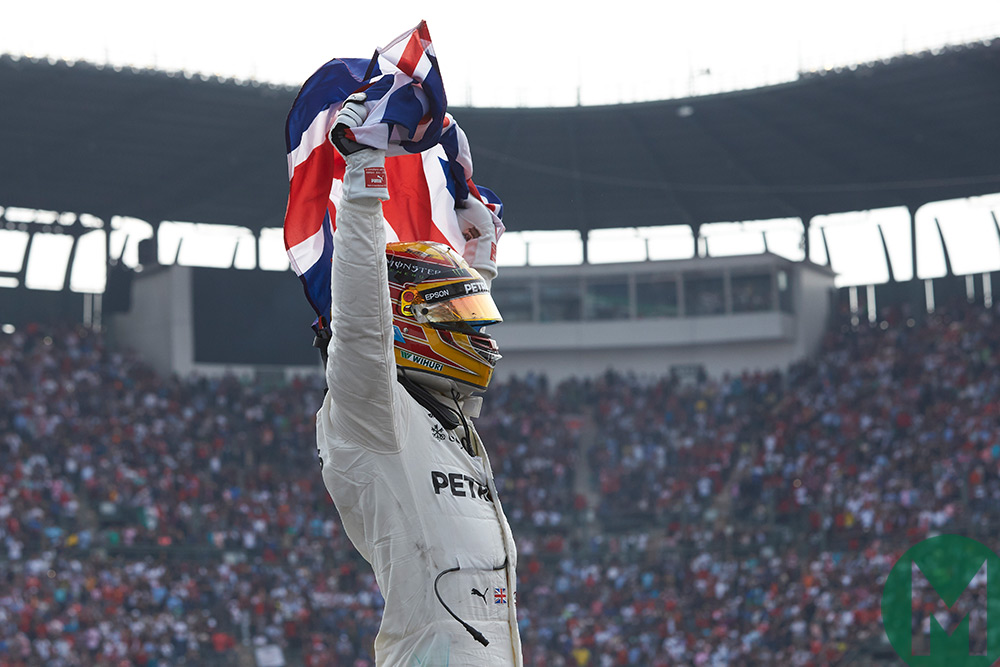 Four-time world champion Lewis Hamilton admitted after the Mexican Grand Prix that some of his numbers have crept up on him: 40 wins over four seasons can do that to one.

Thirteen drivers have started more GPs than Hamilton – but only Michael Schumacher has more wins and podiums to his name.

Schumacher has more fastest laps, too – as have Kimi Raïkkönen and Alain Prost.

Not even the relentless German, however, has clocked more pole positions than Hamilton.

The romantics among us know/feel that how one wins – or loses – in what and against whom, and where and when matters, too: Chris Amon, Ronnie Peterson, Gilles Villeneuve, etc.

His dominant win in the wet at Silverstone in 2008 carries (almost) as much weight as Clark’s at the old Spa in 1963 and Stewart’s at the old Nürburgring in 1968.

Opinion and, to a lesser extent, statistics have been skewed by improvements in mechanical/electrical reliability and safety – but motor racing’s basic objective remains unchanged: as fast as your equipment allows without crashing.

Hamilton has prospered either side of a major technical ‘reset’ akin to those experienced by Stirling Moss and Stewart: from front to rear-engined; and mechanical to aerodynamic grip.

He’s dominated GP weekends in the same smooth way that Clark did, too.

While on other occasions he’s hustled like Moss: against the odds, but undaunted.

He’s had his ups and downs in the face of car problems and relationship shake-ups – father-son, girlfriend, manager, team and team-mates – but even Mr Mind Management Stewart’s mask might have slipped had his unwieldy BRM H16 had a car-to-pit on a world-feed.

It is to state the obvious that Hamilton has ticked all the right boxes – most several times over – and that, therefore, he is absolutely in very good company.

Equally obviously where he stands within said company is open to (often overly) heated debate.

To try to damp some flames, therefore, this particular list is limited to the 10 British F1 world champions – plus Moss, of course – and be broadly based on statistics.

Because career longevity is a factor – both in a negative and positive way – the first stat is:

Button made his debut at 20; Mansell had a perfect chance to walk away in style at 41, but clung on slightly too long – an understandable consequence of his early struggle.

Graham Hill could barely tear himself away, even at 46; Damon, “shell-shocked” at 39, could hardly wait but contractually had to; Surtees didn’t want to, at an old-looking 38, but had to for the health of his eponymous team.

From the Archive: Champions a world apart

Stewart’s retirement at 34 was rock solid and carefully planned, though, as it turned out, unconscionably sad; Hunt was addled and frazzled at 31; Clark taken too early at 32; Moss’s career was over by 32, too.

And Hawthorn, 29, was already under the cloud of serious illness.

The next four stats are ratios: starts per the widely accepted currencies of F1.

Themes are emerging: two-times champion Clark had every base covered; Moss had all but one; three-times champion Stewart was fastest when it mattered most; Hawthorn’s hell-raising belied a calculating approach; Damon was/is underappreciated; and Mansell grabbed his chance and wrung its neck when finally it came/he made it happen.

The concluding stat is each driver’s average of those four starts-per ratios. Let’s call it…

That’s a helluva 1st XI. Button, for example, bats at 11 yet was a match for Hamilton in their three seasons together at McLaren.

Although I might shuffle its middle order were I to don my subjective fancy cap (and blazer), that top four is cast in stone.

Finally, before you start arguing – nicely, I hope – I’d like to point out: Hamilton, 32, has never been better; and he makes an interesting point when he says: “To stand out in the world today, it is a lot harder because it has all been done before.”

Few, very, very few, however, have done it as well as he.