The pattern of performance between Mercedes and Red Bull-Honda over the half-season lends itself to several different interpretations. Certainly, the two teams themselves have frequently been surprised at the way the swings between them have worked out at different tracks.

There are reasons driving the anomalies – the sensitivity of the tyres to track temperatures and the difficulty of finding their sweet spot, two very different concept of cars with contrasting traits in terms of set up options and tyre usage – but they only matter because the two cars are fundamentally fairly close on performance. In recent seasons, an unfavourable combination of demands for Mercedes would simply reduce the margin of its superiority rather than put it behind another car. This season the constantly shifting relative importance of the driving factors is being made more visible by changing the colour of the car at the front.

The Mercedes was definitely behind and playing catch-up on pure performance at the opening round in Bahrain. At Imola it was closer to the Red Bull – only errors by both Red Bull drivers in Q3 prevented them locking-out the front row – but the Merc’s inability to generate temperature in its front tyres quickly enough always gave Max Verstappen a nice cushion to work with, once he’d muscled his way past Lewis Hamilton at the start. In the five laps it took for the Merc to get its tyres working, Verstappen was 5sec up the road.

Hamilton had to settle for second around Imola

In Portugal the two cars were extremely closely-matched, the Mercedes with a possible small edge. It was keeping its front tyres nicely cool through the hairpin/long looping corner onto the straight, enabling Hamilton stay close enough to Verstappen down the pit straight to be able to make a DRS pass, something Verstappen was unable to do when behind the Merc. It wasn’t a straightline performance advantage – their speed traces were virtually identical when they each set their fastest laps – it was an advantage when running behind another car.

In Barcelona the Mercedes had much the better tyre usage on race day, trapping Verstappen into Merc’s two-stop trap.

So Merc had started the season behind, gradually drawn closer and then got in front. Which might be interpreted as the team making progress. But it just as easily could have been track traits and if the sequence of venues up to this point had run in reverse order, might we have seen a pattern of Mercedes starting in front but falling steadily further behind?

Monaco was the first track where maximum downforce was needed – where how much raw downforce could be loaded onto the car would determine which was the faster. Red Bull comfortably aced that contest, the Mercedes further troubled (again) by its reluctance to get its front tyres quickly up to temperature. In Baku Mercedes only got itself into qualifying contention by using a much smaller rear wing than was optimal for the race and Red Bull’s bigger-winged performance advantage – the way it could still have good tyre performance at the end of the stint – was easily going to convert into a Verstappen victory, until the exploding tyre chaos. 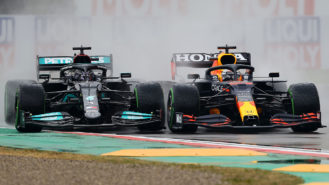 Hamilton vs Verstappen: who's the driver of the season so far? – MPH

It's been one of the tightest, most intense title battles in a generation – but who is MPH's driver of the season so far?

Similarly France was won by how much more tyre performance the Red Bull had at the end of its stints, enabling Verstappen to make that mighty in-lap which, in combination with a shaky performance from Merc around the stops, vaulted him to victory. In the two Austrian races the Red Bull – now being heavily developed – was just plain faster everywhere.

Then Silverstone, a track which in its low-drag demands might be expected to favour a low-rake car such as the Mercedes. The Merc – fitted the last of the ’21 upgrades the tunnel programme had delivered – was certainly in much better shape there than in Austria. But the Red Bull still looked marginally quicker – with the exception of Friday qualifying. Red Bull, in looking to protect the vulnerable left-front around Silverstone, did not run the maximum permitted camber. Which caught it out as the track temperatures reduced in qualifying, giving Verstappen an understeer he didn’t encounter at any other time of the weekend. The Sprint – where Verstappen pulled out a comfortable gap on Hamilton and then just maintained it – looked like the real picture. Which, if true, was worrying for Mercedes, as it’s a track well-suited to its traits.

Then the total anomaly of Hungary. We have to take this one out of the reckoning. The Red Bull was miles out of its sweet spot. Something about the circuit’s long-duration medium-speed corners was giving it outrageous degrees of understeer even at full front flap. It was in desperation that they surrendered downforce by switching to a smaller rear wing from Saturday onwards. This was the furthest behind Red Bull had been all season, by an enormous degree. Verstappen qualified 0.4sec behind Hamilton there, having two races earlier qualified 0.3sec in front. Those attributing that swing to the Mercedes upgrade at Silverstone would have you believe the new floor and barge boards brought 0.7sec of raw performance – which, if it has, would stand as possibly the most powerful single upgrade in modern F1 history. No, Hungary was a misnomer. The upgrade for sure will have brought Mercedes something, but nothing like that.

So how is it going to play out next? Spa and Monza stand out as good Mercedes prospects. Zandvoort is an unknown, Sochi will, as ever, be about the tricky front/rear tyre conundrum more than differing aero traits. Suzuka has Red Bull written all over it. Austin it’s not obvious. The high altitude of Mexico always hurts the Mercedes power unit. Then who knows what happens to the calendar?

Picking through all the noise of the data we’ve had so far, trying to find a thread which is consistent with everything we’ve seen is not a simple matter. But I still believe it’s advantage Red Bull in the balance of the season in terms of raw performance – but with many possible complicating factors likely to feed in, not least potential engine penalties. This story is set for many twists and turns yet.