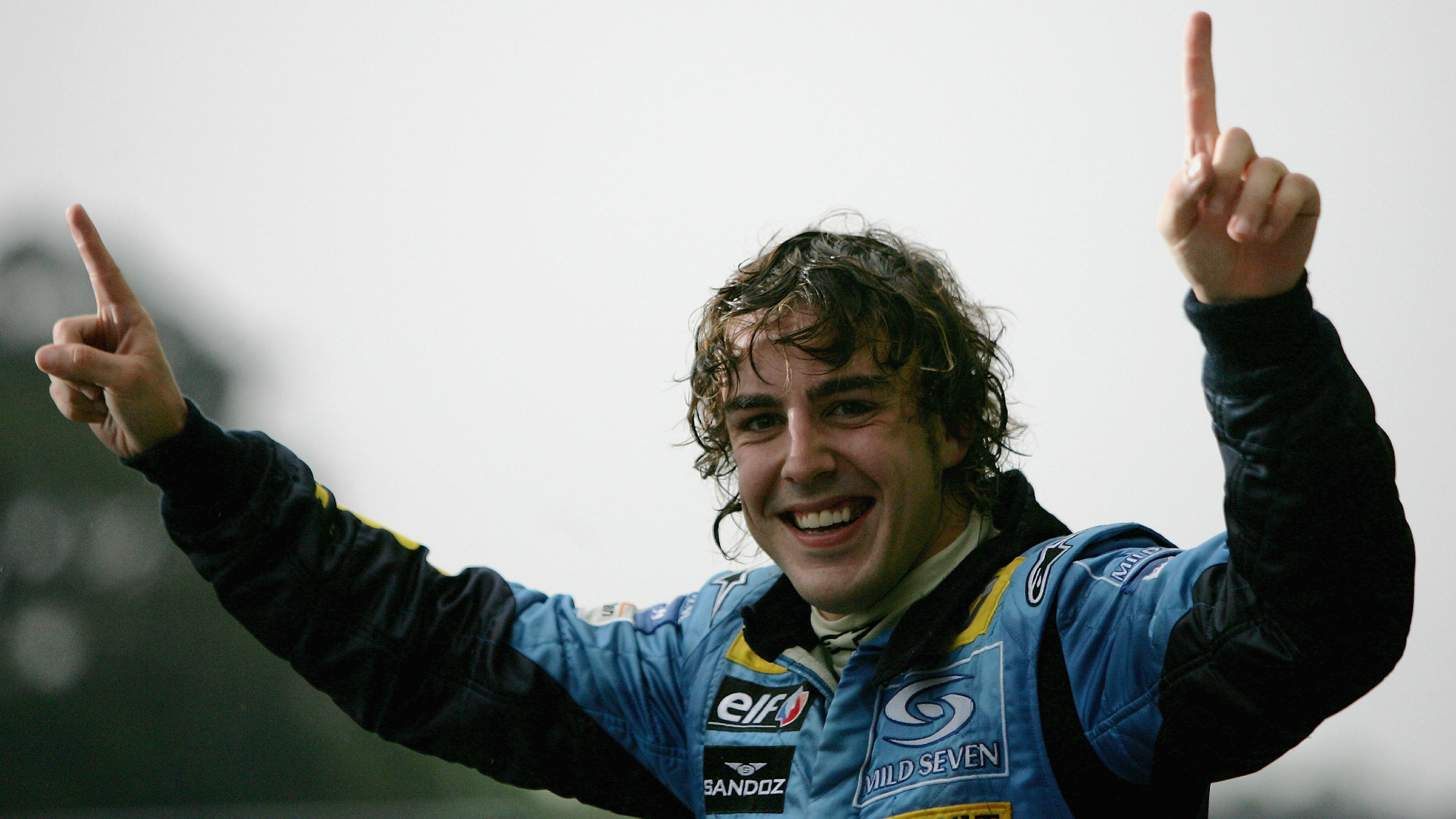 Alonso in parc ferme after winning the 2005 F1 title 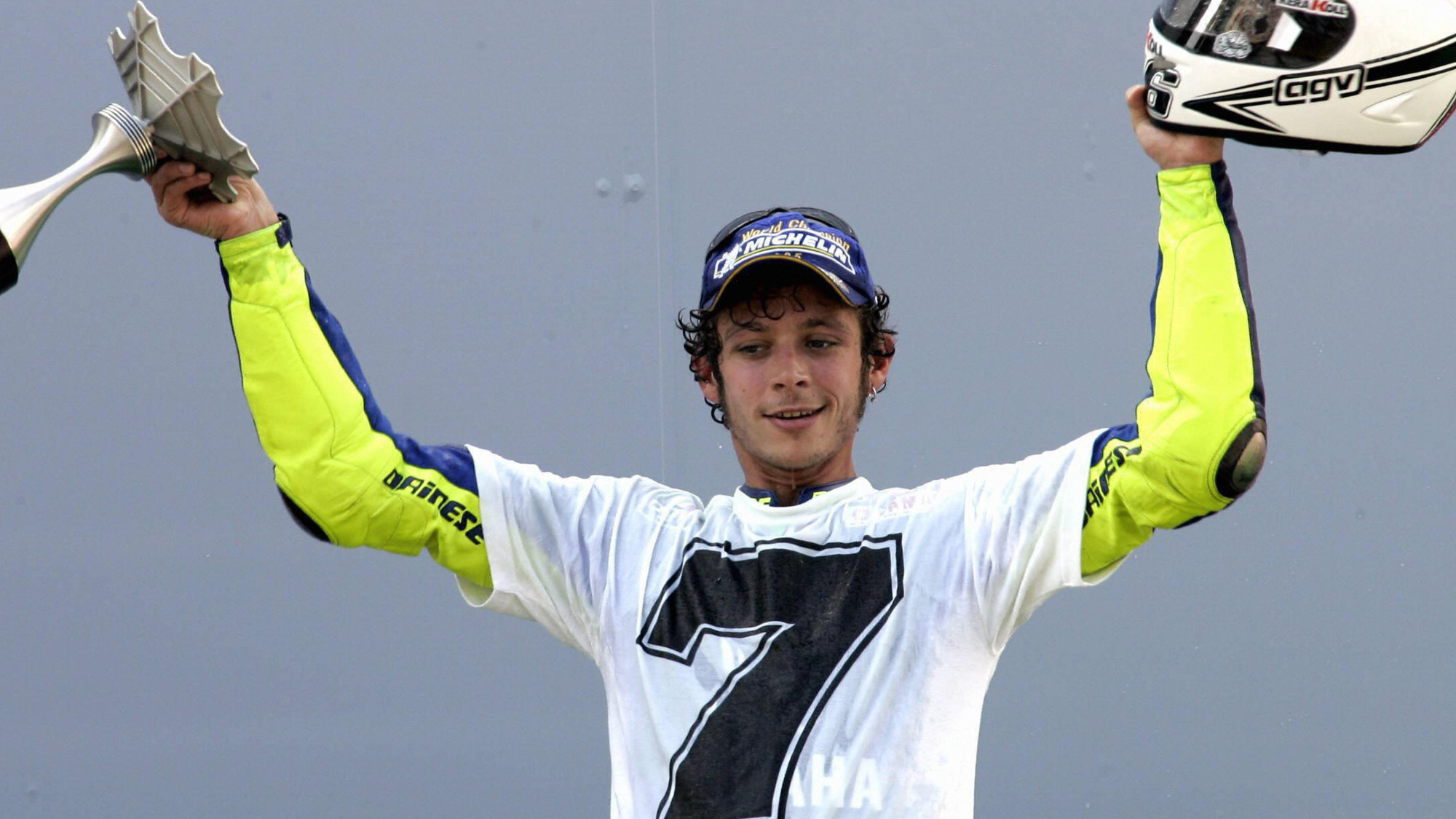 Rossi on the podium after his fifth premier class championship

Take the two debut championship winners, for example. Two young Spaniards who rose above the rest with relentless consistency.

Alonso’s immense 2005 form meant he finished on the podium in 15 of that year’s 19 races. Two of the times he missed out were non-finishes: a suspension failure in Canada and Indianapolis, where he didn’t even start.

Mir’s consistency this year made him the championship leader despite not winning a race until earlier this month at Valencia. The Suzuki rider has more podiums than anyone else in 2020 and that will not change no matter the result in Portimao in the season finale.

Neither took the title from the top step of the podium: Alonso’s third-place finish at Interlagos gave him the title while Mir’s conservative seventh was just fine with his title rivals hitting trouble at Valencia.

The Spanish youngster took biking’s biggest prize in only his fifth grand prix season, during which Joan Mir had to beat Covid as well as his rivals

However, there was no mistaking the significance of their title wins. Alonso’s victory finally ended the seemingly unstoppable run of Michael Schumacher who, in 2000, had claimed the first F1 title for Ferrari driver in 21 years and had not stopped winning since. Alonso’s victory also returned the title to the Enstone team after a ten year gap.

Mir is the first MotoGP champion whose name isn’t Marc Márquez since 2016; the Honda rider unable to defend his title after breaking his arm in this year’s first race in Jerez. Mir ends Suzuki’s 20 year wait for the title, becoming the first Suzuki rider to win the championship since Kenny Roberts Jr in 2000.

These shifts in the competitive order rarely happen by chance. As well as the absence of Márquez this year through injury, Mir has also been the beneficiary of a changed rear tyre compound.

A new construction method Michelin’s new rear slick this year has thrown many riders and engineers for a loop. Finding and maintaining the ideal operating window and exploiting the grip as effectively as possible has made the difference.

The updated rubber creates a larger contact patch while the tyre is interacting with the track surface, which has the effect of reducing grip on the front tyre on corner exit. Being able to balance the mid-corner with corner exit speed all while maintaining the best of the tyre has been a huge challenge for every rider in 2020.

Mat Oxley has explained why the Suzuki’s GSX-RR has been the machine for the job, with its wide operating range and balanced character. Combined with Mir’s ability to extract the maximum from it with his riding style, rivals were playing catch up week after week

Uncannily, it was a tyre change that helped Alonso overturn Schumacher’s dominance in 2005 as well, with Michelin once again at the root of it.

Formula 1 introduced a ban on mid-race pitstops during that season, in a bid to curtail the Ferrari-Bridgestone dominance.

MPH: Hamilton's slick strategy — 'He just knows what to do'

This was a race of tyre temperatures, and their wild variation between cars at different stages of the weekend. This was why the car which had been on pole for…

It worked spectacularly. The older qualifying-style tyres that Bridgestone supplied to Ferrari, were no longer the hot ticket for winning in 2005, when tyre preservation was key.

Step forward Alonso and Renault. This combination was the best at finding the limits of the Michelin tyres, and the Spaniard’s unique style of throwing his car into corners and dealing with the understeer via the rear stability the Renault R25 provided mid-corner made them the package to beat.

You could see these parallels as coincidence, but they are just one example of how regime change often happens in racing, where changing regulations typically upend the competitive order. When one aspect changes, some benefit and others lose out – often unpredictably, and changing the status quo.

Hamilton and Rossi’s titles very much represented business as usual. Just as Hamilton was unmatched this season, so Rossi was in 2005.

Rossi’s fifth title triumph put him alongside Mick Doohan in terms of World Championships, with only Giacomo Agostini ahead with eight.

He was peerless in the ’05 season, taking 11 race victories on the way to the title and finishing 147 points ahead of his closest challenger Marco Melandri after 17 races. He left team-mate Colin Edwards well behind. The American ended up a distant fourth in the standings with less than half of Rossi’s points total.

Mid-way through the season, Edwards described what it was like racing alongside one of motorcycling’s greats.

“The guy is phenomenal,” he told Crash.net. “I have seen the way he works. The biggest thing is his attitude, there is not one inclination of maybe I might get beat this week, he doesn’t think that way in any shape or form.

“To beat him is going to take 27 or 28 perfect laps and then is that enough? I don’t even know if that’s enough.” Sound familiar?

Victory in Turkey was the tenth of the season for Hamilton, and one in which he displayed the relentless determination, focus and inability to contemplate defeat that he shares with Rossi. This belief, where others would be dismayed, has seen Hamilton find triumph from adversity.

He now stands in a position to equal the all-time record for F1 wins in a season — even in this year’s shortened 17-round schedule. 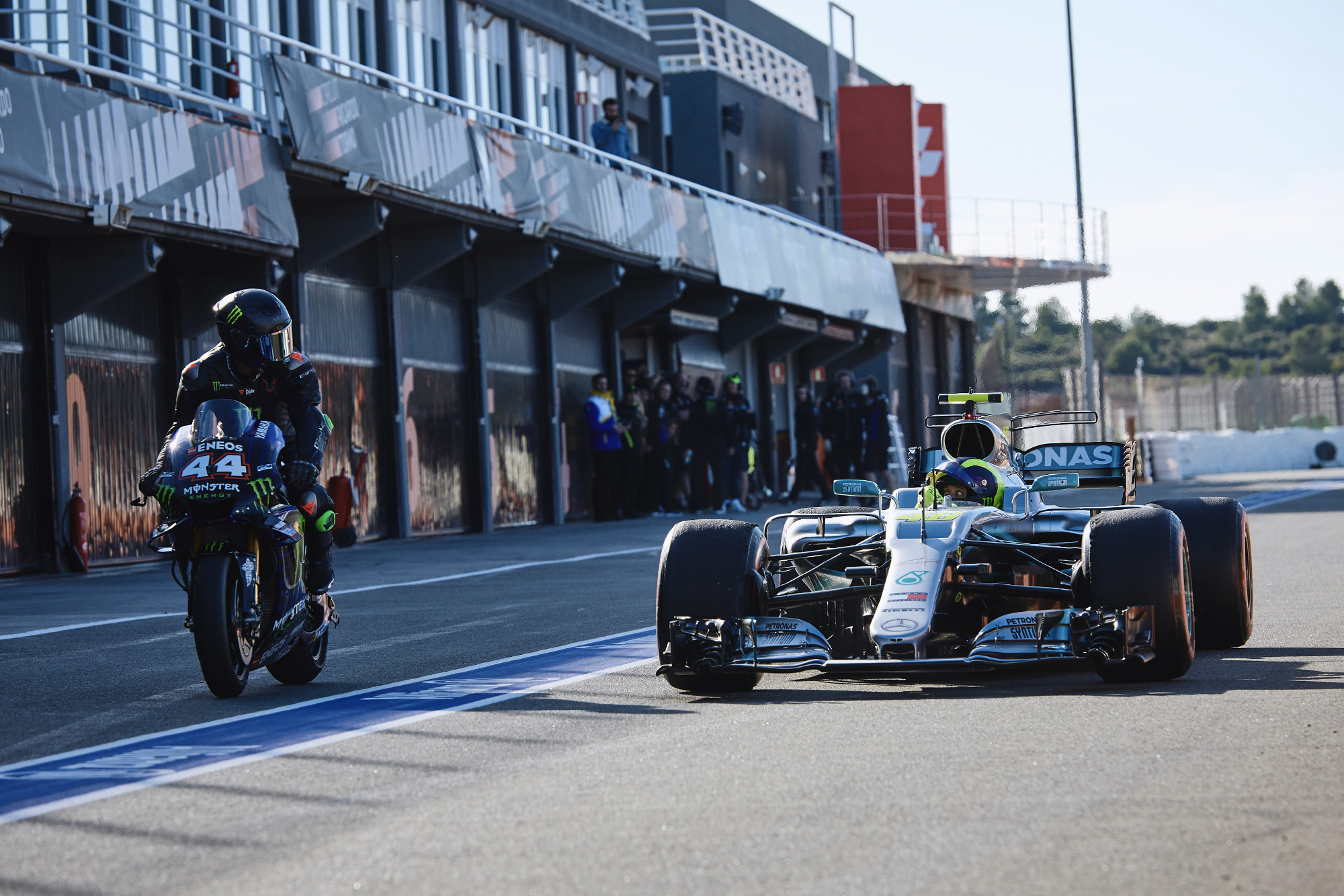 The gap between Hamilton and Valtteri Bottas is 110 points currently, but you certainly wouldn’t bet against that continuing to grow before the chequered flag falls in Abu Dhabi.

The Finn was certainly left questioning just what had gone wrong after stepping out of his car in Turkey, ending up a lap down on his team-mate having spun six times along the way.

It’s no surprise that Hamilton and Rossi get on — the pair swapping their rides last year — given their shared personalities, as well as their desire to leave a positive legacy.

Both have arguably transcended their respective disciplines, with The Doctor probably the most renowned bike racer across the globe and Hamilton involved in a number of side projects centred around social justice, sustainability and fashion.

Rossi is in the process of forging a dynasty with his VR46 Academy, which has cultivated the talent of Franco Morbidelli and Pecco Bagnaia, with plenty of other young riders in the pipeline.

This year, Hamilton announced that his X44 team would compete in the new Extreme E series next year, and he has also been the driving force that has pushed diversity in F1 to the forefront.

“I feel like I’m only just getting started,.” he said after clinching the title in Turkey.

“I feel like we’ve got a lot of work to do here; we’ve only just begun to hold ourselves accountable as a sport.

“We cannot ignore the human rights issues that are going on around the countries we go to, and how we can engage with those countries and help them, empower them to do more to really change – not 10 years from now but now.

“I want to help Formula 1 and Mercedes in that journey. Also, moving [to be more] sustainable as a sport; I want to see if I can be a part of that, at least the first part of that, for a little bit longer.”

Expect a great deal more from the champion in coming years: he’s formed the Hamilton Commission in partnership with the Royal Academy of Engineering to improve black representation in motor sport, focusing on those with an interest in studying STEM subjects.

At this point, he already stands as one of the greatest racers of all time, as did Rossi in 2005.

The Yamaha rider, of course, added two more titles to his name in 2008 and 2009 and remains just one shy of Giacomo’s all-time benchmark of eight. Next year, Hamilton could go on to add an eighth of his own, particularly as regulation changes have been pushed back to 2022.

And what of the young pretender? The season after Alonso and Rossi won the title in ’05, the former added a second to cement himself as the next big thing in F1, while Rossi’s consecutive run of titles came to an end as Nicky Hayden claimed the 2006 championship at the final race of the season. What happens when (if) Marc Márquez returns to challenge Mir at the start of next year?