Both suffered a sudden collapse of a ‘skyscraper’ rear wing as they crested a rise at Barcelona’s Montjüich Park on May 4, 1969.

Hill’s 49B pinballed between barriers but remained upright, its driver shaken but unhurt. Its wreckage, however, would compound Rindt’s accident.

The latter suffered a broken nose and cheek, facial cuts and a hairline skull fracture when his collided with its sister car and tipped over.

The crashes went some way to bringing the era of experimental, ungainly and spectacular high-winged cars. The opening chapter of aerodynamic aids in F1 had been short but far from sweet.

A relationship with Lotus team boss Colin Chapman, already straining after just five months, snapped when Rindt aired his dirty air in an open letter written while recovering from his crash landing.

He gave two fundamental reasons as to why newfangled wings should be banned:

“1 Wings have nothing to do with a motor car. They are completely out of place and will never be used on a road-going production car. Please note, I mean wings and not spoilers, which are incorporated into the bodywork… after all F1 racing is meant to be a serious business and not a hot rod show.

2 Wings are dangerous, first to the driver, secondly to the spectators. When wings were first introduced to F1 racing at Spa last year they were tiny spoilers at the front and the back of the Ferraris and Brabhams [for whom Rindt was driving at the time.] They had very little effect except at high speed, when they were working as a sort of stabiliser. This was a very good effect and nobody thought any more about it until…” 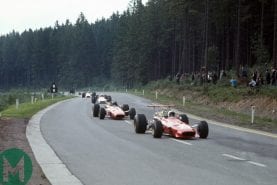 Exactly 50 years ago, rear wings entered the world of Formula 1, at Spa behind Chris Amon... The winglets had grown, in tandem the times tumbled. It was Spa-Francorchamps, 50…

As he had been when F1 put its horse behind the cart 10 years previously, Chapman was slow to mine the sport’s new performance parameter. When finally he got to grips with wings, however, his aerofoil overshadowed all others: almost as wide as the rear track and 4ft tall, it was mounted on two spindly struts without triangulation that were attached to the uprights.

A young and inexperienced Jackie Oliver, already in the impossible position of replacing the late great Jim Clark in the category’s fastest car, was not entirely convinced.

“I was the guinea pig,” he says. “The first time I saw the aerofoil on my car was at Rouen [for the 1968 French GP]. It was bigger than Graham’s and I was suspicious.

“When the dust settled I thought I was in heaven because I could see these large wrought-iron gates.”

“So I gave it a little push sideways and it went ‘Wong! Wong! Wong!’ on rubber bushes. Colin said, ‘Look, lad, when a 707 takes off, its wings sag. They have to so they don’t break.’

“I don’t know for sure what caused my accident. Dickie Attwood saw me in his mirrors and moved to let me through. We swapped sides at 180mph. It was a strong manoeuvre and I think that, plus his BRM’s turbulence, caused a strut to fail. Downforce became lift and I lost control.

“When the dust settled I thought I was in heaven because I could see these large wrought-iron gates (below). Actually that was something I said later. I didn’t have that thought at the time. Colin said I was as white as a sheet.”

Chapman surmised for a time that gearbox had been torn from engine by wing. In fact Oliver had struck the curving abutment to those gates.

The new forces were being both over- and underestimated.

Peter Wright, who almost 10 years later would seal ground effect for Lotus, says: “Colin had an instinct – later backed by a bit more science – as to why something should work. If he believed in it, he’d stick with it.

“But we were in an unknown area and didn’t have the tools. Had we known more we would have been scared stiff. Calculations – best estimates – were slow but the need for a wing was pressing.”

Jacky Ickx’s win for Ferrari at Rouen – the first for an F1 car equipped with a rear aerofoil – ensured that the warning signs would go unheeded by F1’s ‘unreasonable men’.

“The car jumped from one side of the track to the other. That’s how it was then.”

Matra introduced a feathering system using levers operated by a solenoid energised by a contact beneath the brake pedal.

And Lotus – the tallest tree in the forest – went driver-adjustable just prior to the championship-decider in Mexico City. Its method was low-tech: Bowden cable attached to a fourth pedal pulling against bungees that otherwise held the wing shut.

One bungee snapped early in the race. Fortunately the other held – “It was a bit hairy” – and Hill became world champion a second time.

Even pragmatic Brabham – its hand forced by Chapman’s unchecked development in an unexplored area – suffered them.

“Everybody was experimenting,” says Wright, then at BRM. “Tasked with a self-adjusting wing, mine was electro-hydraulic. John Surtees did a couple of laps before pressing its button on the steering wheel. He came straight back in: ‘Hmm, interesting. The car jumped from one side of the track to the other.’ That’s how it was then.”

For this is what it took to win now.

And Rindt was desperate to win finally in F1.

So he watched bemusedly as mechanics rushed to widen his wing (by 12in) and add a trailing lip to its central section using aluminium sheet and polystyrene from packing cases (below).

Chapman pointed out that he was not breaking any rule. There was none to break indeed.

Rindt qualified on pole; Hill lined up third. But Chapman was unsatisfied. Bigger was faster and so he was furious to discover that the last piece of aluminium sheet had been used for another purpose.

Rindt led, too, but that wing-on-a-prayer soon began to sag and fold.

The governing body was inclining to agree with Rindt. That the wing on Ickx’s Brabham had exploded and scattered like confetti directly in front of its officials in Barcelona probably clinched it.

Its Commission Sportive Internationale evoked a ‘safety clause’ during the subsequent Monaco GP to have the times set in first practice annulled and the wings removed overnight and for the remainder of the meeting. 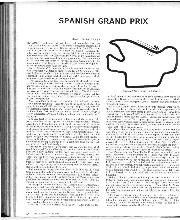 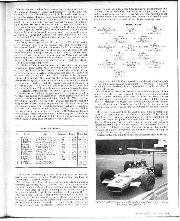 Seasoned readers of Motor Sport will remember that the circuit at Montjuich Park close to the centre of Barcelona was first used for racing as long ago as 1933. But as a…

“There was a sigh of relief,” says driver Derek Bell. “Today’s F1 has the halo. Back then cars had a ‘guillotine’ on the front!”

Not everyone was behind the ban – as you’ll see in the editor’s note to the Motor Sport race report – and, in any case, this genie was out of its bottle

The new rules were woolly: smaller, lower wings to be part of the bodywork and fixed.

And the teams’ interpretations of them were, according to Denis Jenkinson’s Dutch GP report for Motor Sport, either honest, cheating or stretching the imagination.

It was cruel irony that Rindt should crash fatally during practice for the 1970 Italian GP in a Lotus 72 voluntary shorn of all wings.

He had been right though: racing is the poorer for wings.