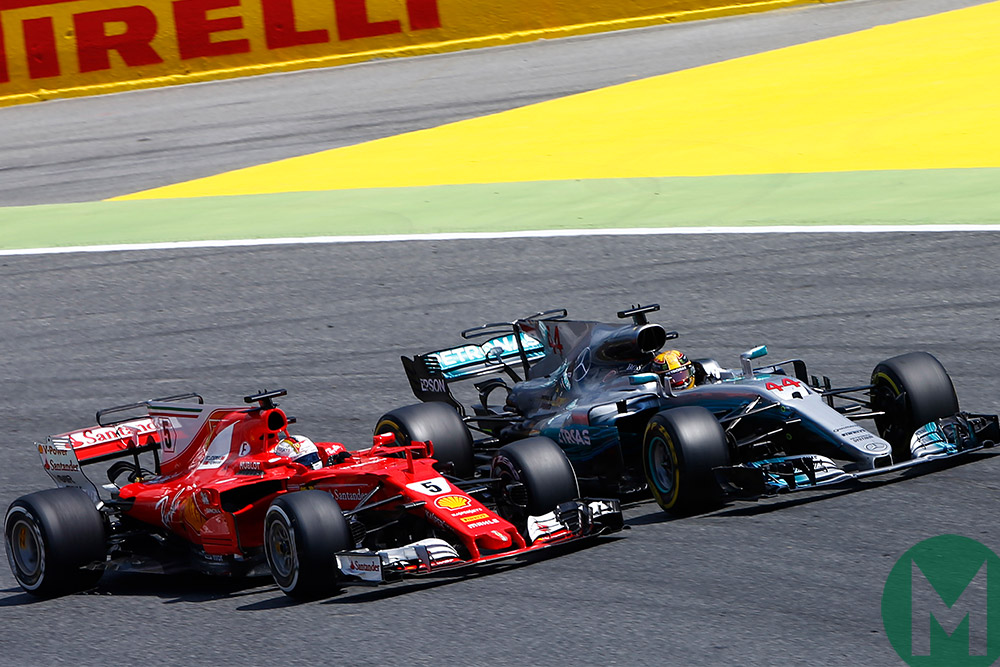 With the new car launch season rapidly approaching, the real intrigue is surely what Mercedes and Ferrari will deliver. Both teams are believed to be developing cars that depart somewhat from the philosophies of the two machines that proved so evenly matched in performance last year, despite very different technical approaches. We believe that the Mercedes will be configured around a higher rake concept than its cars of the last five years (more towards what Ferrari ran last year), while we understand that Ferrari will present a car with a longer wheelbase than last year’s (towards what Mercedes ran last year).

The optimisation of a car’s aerodynamics around the high rake concept and the chosen wheelbase are interlinked design choices. The aero philosophy is the dominant factor, with the wheelbase largely dictated by that choice. What we seem set to see are the two adversaries from last year meeting in the middle compared to the starkly different choices they made for 2017, the first season of the all-new aerodynamic and dimensional regulations.

As our recent feature in the December issue of the magazine (see pages 72-80, for more detail) explained, last year’s Ferrari almost certainly had more raw downforce than the Mercedes but the latter was more aerodynamically efficient in the downforce/drag trade-off. The smaller Ferrari was lighter and could, therefore, more easily vary its weight distribution by use of ballast, something that made it more tuneable to a wider range of tracks and tyre compounds. These traits were driven by the respective rake concepts.

Mercedes has followed the low rake concept since Mike Elliott joined as chief of aero from Lotus, where his softly-suspended, low-rake cars had given Kimi Räikkönen and Romain Grosjean such strong seasons in 2012 and ’13. All Mercs since that time have followed that general concept. But last year’s regulation bodywork width increase – specifically the wider floor it brought – increased the advantages of the high-rake concept used for years by Red Bull, and last year by Ferrari (and almost everyone else). The balancing point of the trade-off between low rake and high was altered by the wider floor.

High rake works by increasing the underfloor’s expansion area (because there is more space between the floor and track) behind the tiny gap between the floor’s leading edge and the track surface. When the air has a greater space to expand into, the pressure in that space is lower, increasing the speed of the oncoming flow as the air rushes to fill the lower pressure area. With the 2017 regulations increasing the underfloor’s area, this effect was amplified (as the downforce produced is a multiple of airflow speed and the floor area).

Mercedes compensated for the greater effect of their rivals’ more angled floors by increasing the length of theirs (making up in floor area what was being lost by a slower airflow). The only way of doing this was to increase the wheelbase. A wheelbase that was 14cm longer than that of the Ferrari helped with downforce but brought more weight. Early-season the car was actually over the minimum weight limit and therefore could use no ballast at all, freezing the weight distribution, and even after a weight loss programme it still couldn’t use enough ballast to cover the full fore-aft weight distribution range allowed in the regulations.

Ferrari’s smaller car was a full 8kg beneath the weight limit before being ballasted. But this was actually more than was needed to cover the weight distribution range. The weight distribution is allowed to be between 45.6-46.7 per cent front and a corresponding 54.5-53.3 per cent rear. To have access to that full range requires 5kg of ballast. The Ferrari was, therefore, lighter than it needed to be. Which meant, in turn, it was unnecessarily surrendering downforce through its shorter wheelbase. A 3kg increase in weight (allowing 5kg of ballast rather than 8kg) would suggest a wheelbase extension of around 9cm (which would make it just 5cm shorter than last year’s Mercedes).

Similarly, Mercedes – having gone on record as saying it is targeting a car with more easily accessible performance than the W08’s – may well be coming down from its 2017 wheelbase with an aero concept devised around higher rake angles.

Muddying the waters will be the near-certainty that neither team will publicly reveal the wheelbase of their cars – and so we’ll have to wait for picture analysis and other intelligence in testing or the early races.