Because this new generation of cars can follow more closely, you can retaliate once you’ve been overtaken. In combination with a Jeddah track that is one big slipstream and DRS zone, this enabled Max Verstappen and Charles Leclerc to continue their Bahrain dice of last week, but for longer this time. Once they got close enough together, that is.

For much of the race – in between the point where initial leader Sergio Perez was caught out by the timing of a safety car and 20-odd laps later when a three-lap VSC caused everyone’s tyres to cool – Leclerc had enough in hand that he could keep Verstappen’s Red Bull off his back. He was having to drive the Ferrari flat-out to do it and Verstappen was pushing just as hard trying to get within that crucial 1sec at one of the three DRS detection lines. But that invisible cushion was gone after the VSC and Verstappen was ready to go at it, bold and committed, just as Leclerc was smart and composed. Just like for those three laps in Bahrain. With a lower downforce wing the Red Bull was faster at the end of the straights and ultimately that’s what decided it in Verstappen’s favour, much as Leclerc made him work for it.

Similar slipstreaming battles enlivened a multi-car midfield contest for sixth eventually won by Esteban Ocon’s Alpine. In a no-man’s land between the four-car Red Bull/Ferrari struggle and that midfield, was the best-placed Mercedes, that of George Russell. In the sister car, Lewis Hamilton, having failed to make it out of Q1, drove a compromised race to 10th. The Mercedes is still a long way from being able to fight at the front, or anywhere near it. 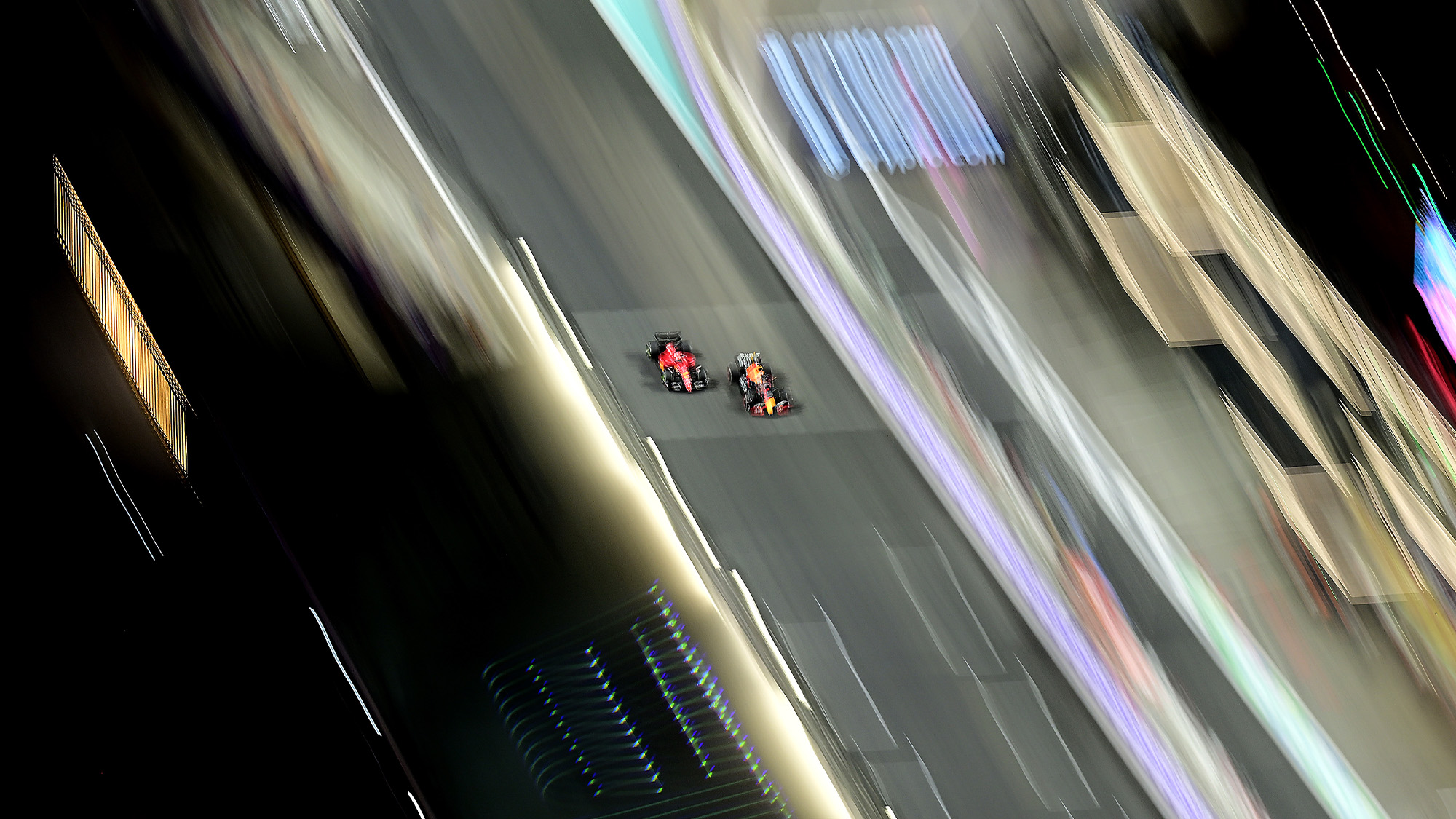 The slipstreaming battle that won the race Verstappen

It was a race which might not have happened and which maybe should not have, with drivers initially unanimous in planning not to after a Houthi Yemen missile strike hit an oil storage depot just a few miles from the track. They were convinced to change their collective mind after F1 and team bosses returned from their hotels en-masse in the early hours of Saturday.

There were three distinct phases to the race, punctuated not by any further missiles, but thankfully just by a safety car and a VSC.

After scoring his first pole position at the 215th time of trying, Perez took his Red Bull straight into the lead and looked quite comfortable there ahead of Leclerc, Verstappen and the Ferrari of Carlos Sainz. They pulled away as a quartet from Russell once the Mercedes had fought past Ocon’s Alpine and left it well behind.

Ocon was left to fight a rearguard action from his DRS-assisted team mate Fernando Alonso. Their dice was startling in its intensity and pulled along Valtteri Bottas’s Alfa and Kevin Magnussen’s Haas in their wake. Alonso’s car was kicking up the dust from the very edges of the pitwall at one stage as Ocon made a very late defence. But their passing and re-passing foreshadowed what we would see at the front later. 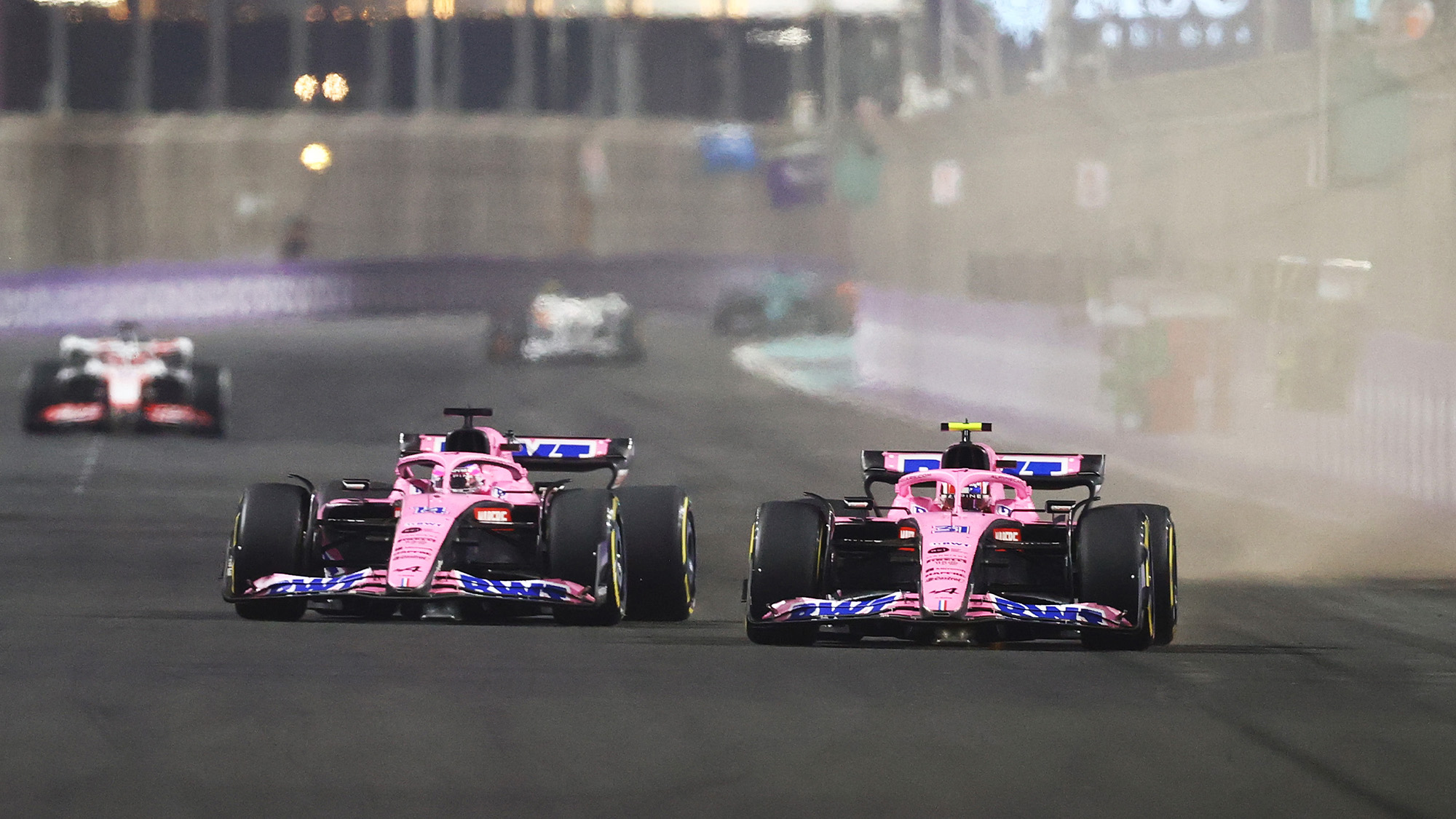 Alpine battle offered a taste of what was to come

Perez could not shake off Leclerc in this first medium-tyred stint. It was a tyre which still required some pace management albeit not to anything like the extent of Bahrain last week. So Leclerc was staying just out of the tyre-damaging zone of the Red Bull ahead, just as Verstappen was doing to Leclerc – and Sainz in turn to Verstappen.

Ideally, to give himself full control of this race, Perez needed to pull himself 3-4sec clear. But he just couldn’t do that without destroying the rubber. As the gaps behind them opened up and the pitstop window approached, Leclerc was right there. The pitstop loss was calculated at 21sec and by the 15th lap they were about to have that margin over Russell. That was the gap of clear air which forced Red Bull to do something in reaction to what was certain to be an undercut attempt by Leclerc. Ferrari instructed him to ‘pit for position’ which in reality meant do the opposite of whatever Perez did the next time they approached the pit entry. Perez came in, Leclerc therefore stayed out. A few seconds later Nicholas Latifi crashed his Williams at the final corner and that lost Perez any chance of the win. The safety car was deployed, and with the field reduced to the safety car delta speed, the time loss of a pit stop was only around 11sec. So Leclerc, Verstappen and Sainz all leapfrogged past Perez, the latter only just. Sainz was ahead at the safety car line as he exited the pits, but Perez was able to physically block him rejoining in front. Under instruction, Perez reluctantly gave the place back once racing got underway. Had he done it when they were behind the safety car, Sainz might have got a run at Verstappen on the restart. Red Bull played it smart. 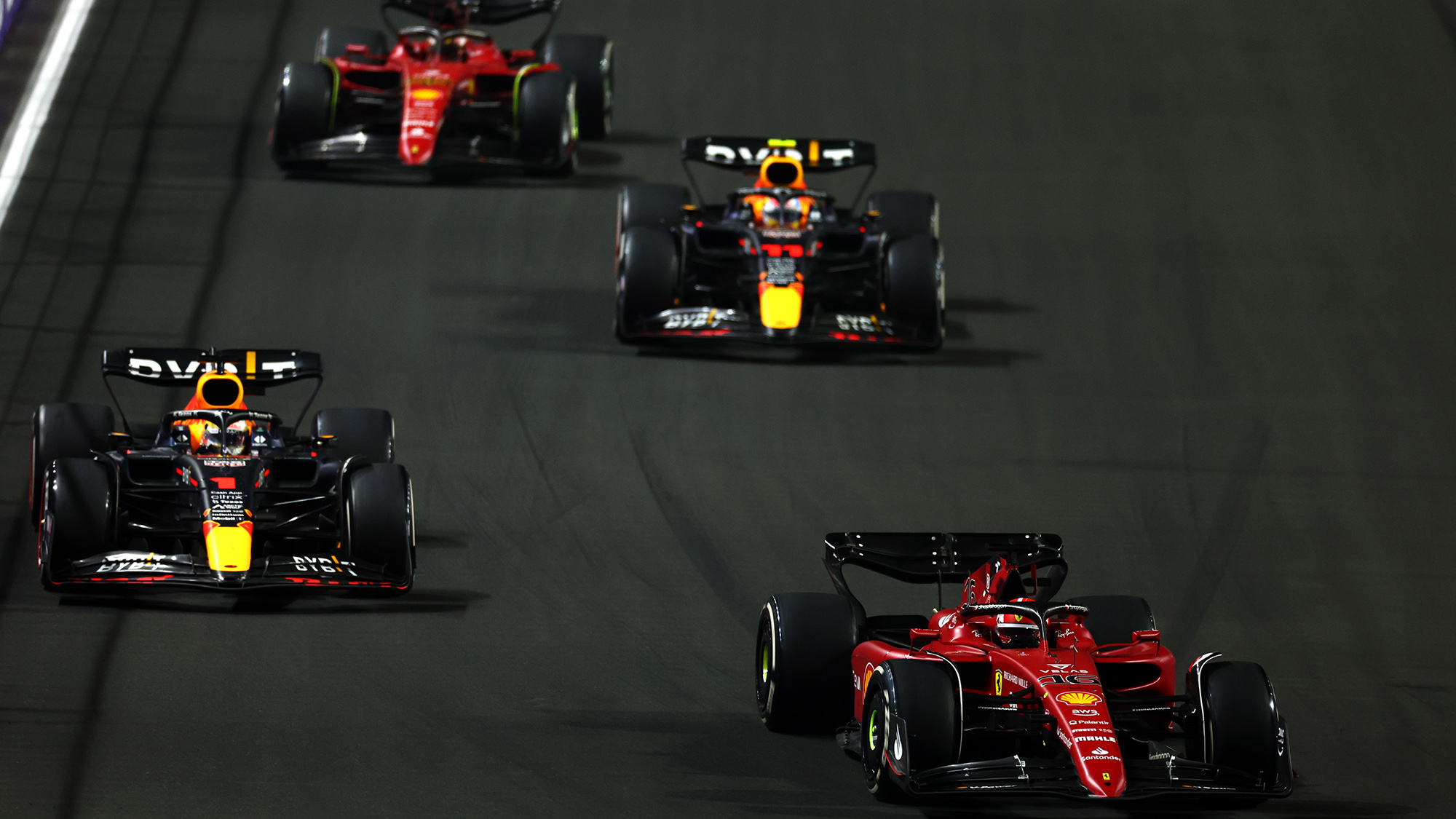 As it was, Leclerc was in control of the restart despite Verstappen’s crowding of him as they slowed to a crawl before the line. The lead pack – and most of the rest of the field – were now on new hard tyres which would get them to the end.

Only Magnussen, Hamilton and Nico Hulkenberg’s Aston Martin had started the race on the hard. It was a better tyre than the medium and the advantage of the long first stint on it had been nullified by the timing of the safety car. They each stayed out, which put Hamilton in sixth, just a few seconds adrift of team mate Russell. On tyres 16 laps older, Hamilton was lapping at Russell’s pace but with the inevitability at some stage of having to make a stop. The longer he maintained a good pace, the more places he was effectively gaining. 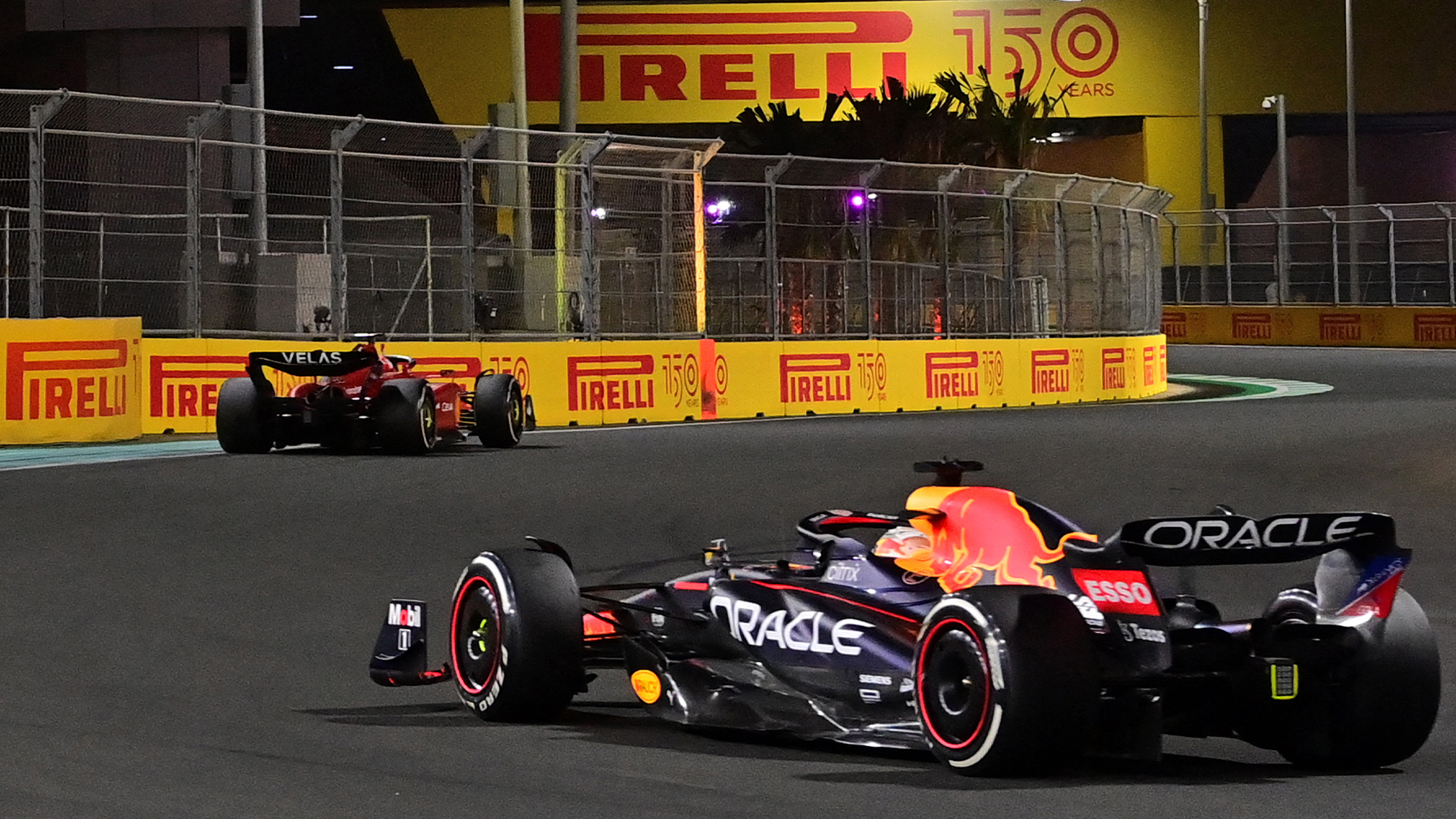 Leclerc and Verstappen meanwhile were finding they could push this tyre hard without it overheating. So Leclerc did everything he could in the first two post-safety car laps to get himself out of DRS range of Verstappen prior to the feature being re-enabled. He was successful in this and for the next 10 laps or so we were treated to a flat-out struggle between them, punch and counter-punch as they traded fastest laps, Verstappen desperately trying to get within the 1sec required at any of the three DRS detection points, Leclerc always with enough in hand to respond and thereby keep the gap at 1.5-1.6sec.

Like this they steadily edged away from Sainz and Perez. Who in turn pulled a long way clear of Russell and the yet-to-stop Hamilton. 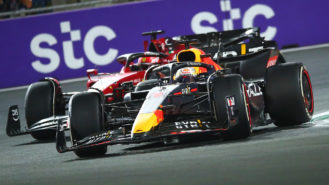 If Formula 1’s rulemakers could have picked two races to start the season to show they’ve got their new regulations right, they would probably have settled for the two they’ve…

Leclerc looked to have it all under control despite Verstappen’s relentless pace. It was a fantastic display from them both, the two cars near-enough equal over the lap. The Red Bull was faster at the end of the straights, the Ferrari accelerated onto them harder and was quicker though the seven slower corners. But so long as Leclerc made no error under this extreme pressure, he looked to have Verstappen covered.

Alonso was now at the head of the midfield but on the 36th lap he lost drive around the back of the circuit. A few seconds later something similar happened to Daniel Ricciardo’s McLaren. They were both trying to coast back to the pits. Alonso eventually stopped out on track and the virtual safety car came into force. Ricciardo got as far as the pit entry lane before he too stopped. Hamilton was told to pit but also that he might be told not to at the last moment if the pitlane was closed. “Ok, you need to tell me, then,” he radioed. Encountering double yellows for Alonso’s crawling car, Hamilton initially was reluctant to pass it until realising it was stopping. Having not heard again from the team and seeing the stationary McLaren in the pit entry Hamilton assumed the pit lane was closed – and continued on. By the time they reminded him to pit, it was already too late. Between them, they’d messed the opportunity up. But it was only for seventh, at best. Instead, he’d rejoin near the back and make a couple of places up before the end to take that solitary point.

Of more significance than the VSC’s effect on Hamilton’s race was how it impacted upon the leader Leclerc’s. He’d won the restart easily enough, but now his worn, hard tyres were cold. So were Verstappen’s of course but the Red Bull could warm them up quicker – something that Sainz also noticed as he fended off Perez.

That extra lap or so the Ferrari needed to get the tyre temperature meant that Leclerc could no longer keep Verstappen out of that DRS zone. Once that spell had been broken, Leclerc had a real job on his hands. Their fight was no longer one step removed but up close and personal, wheel-to-wheel. 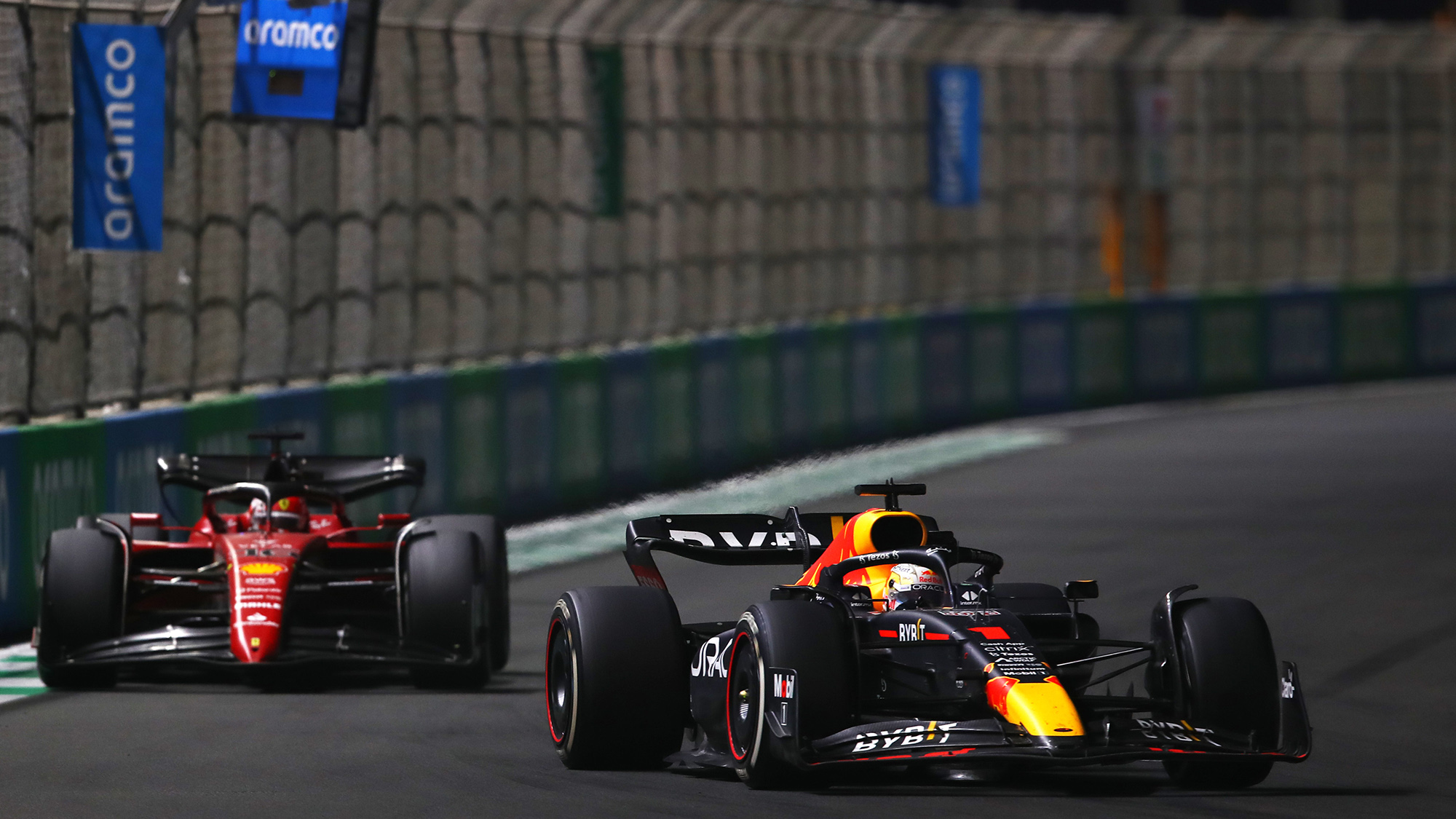 First of all Verstappen got the DRS around the flat-out sweep before the final corner and passed the Ferrari around the outside there. But that final turn is preceded by the DRS detection point for the main straight and so Leclerc used that to repass. Next time Verstappen had another DRS-assisted run at the Ferrari around the sweep but this time played it smarter and backed off. In response, so did Leclerc! With each of them trying not to be first past that line (the same game as Verstappen and Hamilton were playing here last year), Verstappen then locked up his brakes. Leclerc took this as an opportunity to go – and being earlier on the gas enabled him to stay in front despite Verstappen’s DRS. 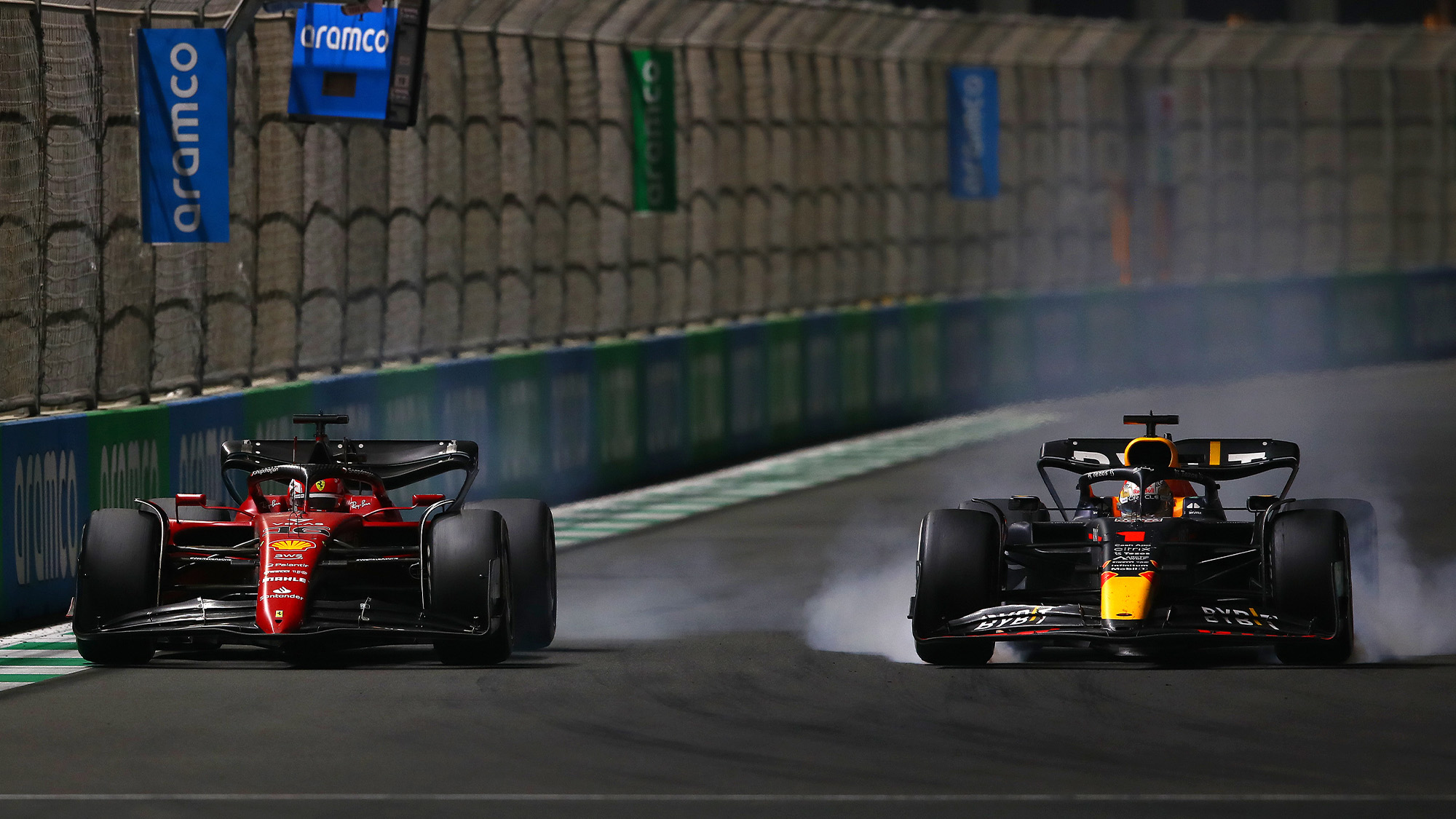 It took Max a couple of laps to get back within the DRS zone but when he did so he was able to place himself on the inside line but remain behind – even to the extent of closing his DRS and feathering the throttle on the approach. That finally gave him the clean DRS pass onto the pit straight – and with Leclerc’s rear tyres now beginning to get too hot, the race was decided.

Sainz fended off Perez, Russell took his lonely fifth and Ocon was best of the rest fending off the attacking McLaren of Lando Norris as Pierre Gasly, Magnussen and Hamilton completed the points scorers.