Last week’s Bahrain Grand Prix couldn’t have got Formula 1’s new era off to a better start – a thrilling battle for the lead, late drama in spades and grand prix racing’s most famous team Ferrari back on top again.

F1’s new rules are designed to make the racing closer and give cars more opportunity to pass. Charles Leclerc’s titanic scrap with Max Verstappen appeared to confirm they’ve been largely successful one race down, and with plenty of action further down the field all the signs are we could be set for another classic season.

Now the F1 circus makes the short hop to Jeddah in Saudi Arabia for the second event of a 23-race campaign, on a fast and flowing 6.174km track which last year provided a breathtaking duel between Lewis Hamilton and Verstappen in what turned out to be a key race for the championship.

Ferrari’s speed in Bahrain partly came from its strength in low-speed corners, but with impressive top speed another weapon in its arsenal, Jeddah – the ‘fastest street circuit in the world’ with 310km/h being hit three times – could well also favour the Scuderia.

Red Bull will of course also be contenders, but will the Milton Keynes squad have solved its reliability issues in just the fews days-gap between Saudi and Bahrain, after fuel pick-up issues stymied its challenge in the closing laps of the latter race?

With another exciting race looking to be in store, here’s how to watch this weekend’s Saudi Arabian GP.

If you want to view all the action live as it happens, below are the times you need to tune into your TV or have your device ready. Times are GMT.

How many laps is the Saudi Arabian GP?

The 2022 Saudi Arabia GP, held on the Jeddah Corniche Circuit, is 50 laps long. The track is 6.174km (3.8 miles) and features three DRS detection zones. There is a 0% chance of rain at the track this weekend, with highs of 27, 29 and 32 degrees celsius on Friday, Saturday and Sunday respectively– though of course FP3 qualifying and the race will be held at night.

All sessions will be live on Sky Sports F1, including pre and post-session coverage. As per usual, Channel 4 will feature highlights of the qualifying and race sessions after both have finished.

NowTV covers every session throughout the weekend, meaning you can stay up-to-date with the action whatever your location. You can download the app on mobile and tablet devices – weekend passes are also available which provide all the live sessions in addition to the pre and post-race coverage.

Ferrari looked strong in testing prior to last week’s season opener, and so it proved as Charles Leclerc fended off Max Verstappen to take Ferrari’s first win in three years, with Carlos Sainz claiming second as the Red Bull challenge faltered.

It’s likely we’ll see the same two teams fighting it out again, with Mercedes filling in the third-fastest slot. In addition to Lewis Hamilton’s podium, George Russell aided the damage limitation with a solid fourth in Bahrain. 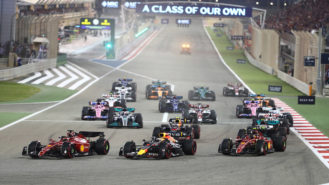 The Brackley team seemed to have solved some of its porpoising testing issues, but is still not quite on top of it in the same way its two aforementioned rivals are, saying it might take “two to three races” to get back on par.

Further back, Alfa Romeo looked to have overcome its testing reliability woes as Valtteri Bottas finished sixth with team-mate Zhou Guanyu coming in 10th, whilst Haas putting all its efforts into its 2022 car appeared to have paid off – a triumphant Kevin Magnussen took fifth place on his return, with Mick Schumacher missing out on a debut point by one place.

We could well see these previous midfield back-markers pick up more points as both Aston Martin and McLaren struggle to extract performance from their new cars.