As Jack Brabham headed towards the last corner of the last lap of the 1970 Monaco Grand Prix, Piers Courage’s hobbled de Tomaso was in exactly the wrong place. What Brabham should have done, as he later admitted, was fall in behind Courage, follow him through the Gasworks Hairpin, then go past him on the run up to the chequered flag. True, Jochen Rindt wasn’t far behind him, but not close enough…

That didn’t tell the whole story, though. If Brabham – most uncharacteristically – allowed himself to be pressured into a mistake, his circumstances had dramatically changed in a very short time, and perhaps a degree of panic set in. 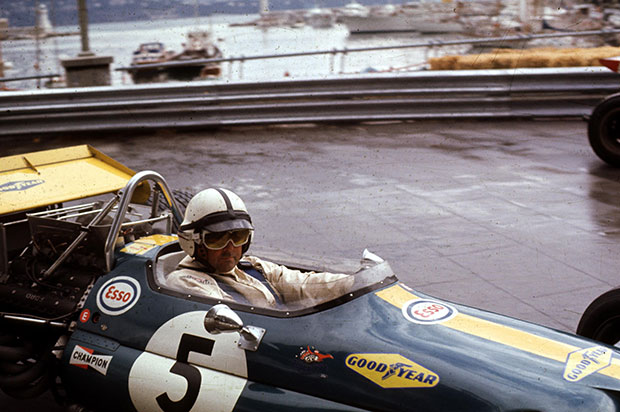 Following the retirement of Jackie Stewart, Brabham had led, closely followed by Chris Amon’s March, and he looked set to win at Monaco for the first time since 1959.  To this point no one had given much thought to Rindt.

Jochen, in fact, approached this race with something close to indifference. “That was the way he was sometimes,” Colin Chapman told me. “If Jochen felt there was no chance of winning, quite often he just went through the motions…”

Rindt had been in a negative frame of mind even before practice began, for Chapman’s latest car, the 72, had disappointed in its first couple of races, and while extensive modifications were undertaken, Lotus had to revert to the venerable 49 for Monaco. Jochen didn’t think the car had a prayer.

It looked that way throughout practice. In the first session he was sixth fastest, but his time – 1m 25.9s – was almost two seconds away from Stewart; in the second it poured down, and Rindt, disinterested, was slowest of all; in the third he felt queasy, and was two seconds off his Thursday time. 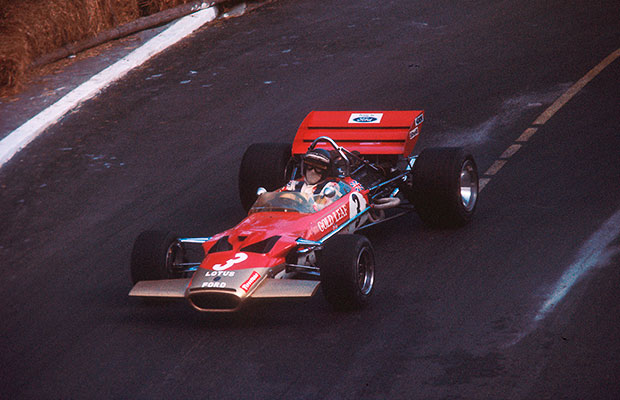 Believe it or not, the problem was seasickness. That weekend Rindt was sharing a private yacht with his good friend Bernie Ecclestone, and while the future ruler of Formula 1 slept soundly through a choppy Friday night, Jochen did not, and that merely added to his despondency about the race. “No chance,” he said to his wife Nina. “I’ll just drive around…”

In the early laps he seemed to be sticking to that: on lap three he was passed for seventh place by Henri Pescarolo’s Matra, and there he seemed content to sit.

By and by, though, his position improved, albeit only by attrition. Jacky Ickx and Jean-Pierre Beltoise disappeared early, putting Rindt up to sixth, which became fifth when Stewart also stopped. At this stage, though, 28 laps in, he was already 16 seconds behind Brabham.

At least, though, his interest was awakened. On lap 36 he repassed Pescarolo, and set off after Denny Hulme, whom he got by on lap 41: third now, with only Brabham and Amon ahead.

It was the old thing, a whiff of possible victory. Fifteen seconds behind the leaders, Rindt now kept pace with them, even closing a little, and when Amon retired, on lap 61, there was only Brabham ahead. 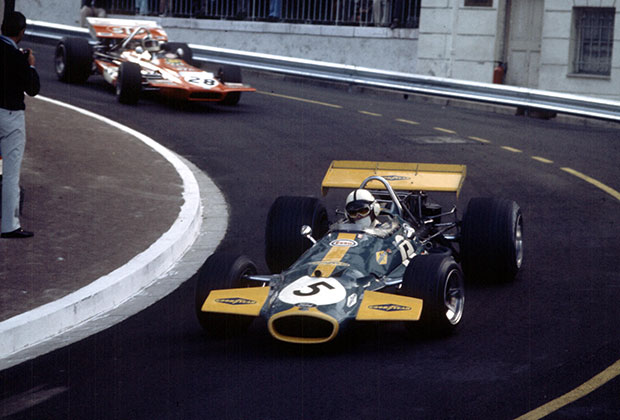 Jack, though, was unconcerned. With the March gone from his mirrors, and Jochen still 13 seconds back, he seemed set – indeed, with only four laps to the flag, his lead was still nine seconds.

Then everything began to unravel. On lap 77, at the top of the hill, he encountered Siffert’s March, stuttering along with a fuel feed problem, Seppi paying little attention to his mirrors. Obliged almost to stop, Brabham instantly dropped five seconds to Rindt.

Still it seemed as though Brabham would hold on, but even on the last lap the fates conspired against him. At Tabac, before the long drag down to Gasworks, he came upon three backmarkers, lost more time, and probably it was this, more than anything else, that unsettled him when he came across Courage.

Into the final hairpin Jack went off line – into the marbles – to get by Piers, and when he put the brakes on, his car understeered straight on, thumping into the barrier, right at my feet.

Rindt, meantime, flicked into the hairpin, looking across at the stricken Brabham, shaking his head in disbelief. Finally Jack got on his way again, and managed to cross the line without losing second place. When he stopped finally, he stayed in the cockpit a long time.

Once the course car had been round, I ran the length of the pit straight, arriving in the area of the Royal Box just as Jochen climbed the steps, shook hands with Rainier and Grace, and accepted the garland and the trophy. Trembling, and with tears rolling down his face, he looked like a man coming out of a trance, and probably he was. After the national anthems, the French commentator excitedly announced his time for the last lap: “Une minute vingt-trois secondes deux-dixiemes!”

After the Gala Ball at the Hotel de Paris, Jochen came down to the Tip-Top Bar, as drivers did in those days. At midnight he and Nina arrived, swinging the trophy between them.

At the Tip-Top they used to run a book on the race, and Rindt wanted to know what had been the odds on him. “Seven to two,” someone said. “Ha!” Jochen grinned. “Was anyone stupid enough to bet on me?”