Another blazing hot day at Monza – and, almost inevitably, another pole position for Sebastian Vettel’s Red Bull. Team-mate Mark Webber was appreciably closer – two tenths, rather than six tenths – than on Friday, but still Vettel appeared able to set new fastest times at will, and that – at Monza – was something new, for traditionally it has not been one of Red Bull’s stronger circuits. 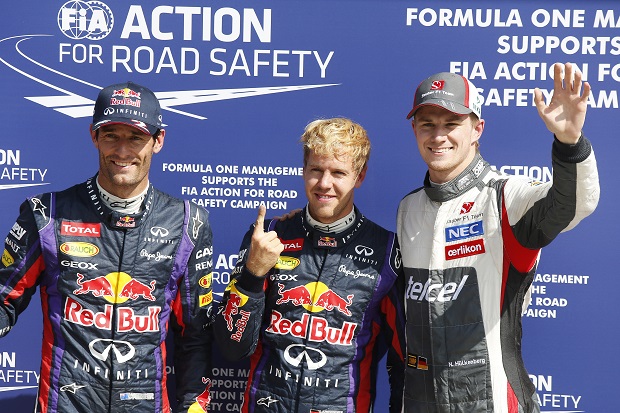 “I have to say the car feels very good here,” Sebastian said after qualifying, “but I’m not taking anything for granted. Ferrari, for example, have looked quite competitive on long runs, and I hope Nico will where he is – between us and the Ferraris…”

Nico? Not, not Rosberg, but Hülkenberg, who qualified a stunning third in the Sauber, which was thus the fastest Ferrari-engined car on the Monza grid. “The car got better and better as qualifying progressed,” he said, “but I don’t know where that time came from! It was a very nice surprise…”

The tifosi  had hoped – of course – to see their beloved red cars up at the front, but in the end they qualified fourth and fifth, and unusually Massa was a hundredth quicker than Alonso.

At the every end of Q3 the Ferraris went out together, about three seconds apart – the ideal gap, believe it or not, for a good tow at Monza – but the slipstreaming went awry because Vergne’s Toro Rosso was between them on the track. “Actually I was getting ready to take the tow of Vergne,” said Alonso. “He seemed to want to follow Felipe at that stage. Then he let me by, and I had no one in front – but by now Felipe was too far ahead, so he slowed down, and waited for me at Parabolica, and then we started the last attempt. 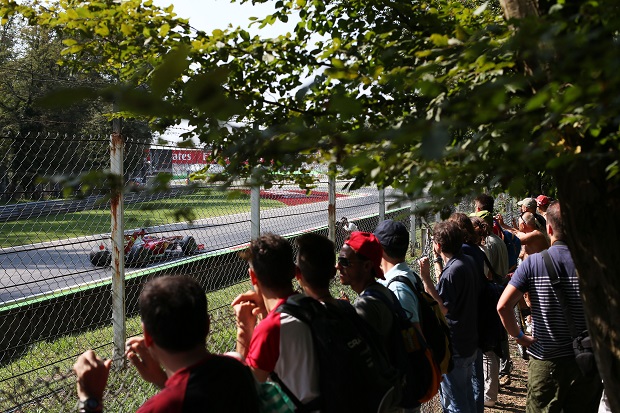 “Unfortunately it didn’t work as we hoped, but I have to say thank you to Felipe, and I still think it was an extremely good qualifying for us – for the first time in many races we shall able on the grid to see the rear wing of the Red Bulls.

“Can we stay with the Red Bulls tomorrow? I think so, yes. Normally Saturdays are the worst part of our weekend: we start with three or four cars between us and the Red Bulls, and by the time we’ve got past them, and are then behind the Red Bulls, normally we can keep that gap throughout the race.

“I’m happy because tomorrow we won’t have three or four cars between us and the Red Bulls – we don’t have Lewis or Kimi or Grosjean, who can sometimes slow us a little bit in the first part of the race. We normally have a good pace on Sunday, and if we have it tomorrow I don’t see any reason why we can’t stay with the Red Bulls…”

Alonso was making a good point. This was indeed an unusual grid: Fernando mentioned Hamilton, Räikkönen and Grosjean, none of whom, amazingly so much as made it into Q3. The Lotus drivers, as on Friday, complained of being unexpectedly short of grip, and Lewis made no excuses. There was some suggestion that he had been held up by Sutil (who was duly awarded a three-place penalty), but he said that didn’t matter: “I should have done the time on the lap before, but I made a mistake, and went off at Parabolica. I drove like an idiot today – the worst I’ve driven for a long, long, time – and I feel sorry for the team…”

Frankness on this level is virtually unknown among Grand Prix drivers, and Hamilton’s words took everyone aback. His Mercedes would start 12th, on the same row as a disappointed Räikkönen.

Nico Rosberg missed most of the morning practice session with an overheating problem, but took a solid sixth in qualifying, ahead of the Toro Rosso of future Red Bull man Daniel Ricciardo, with Vergne’s sister car 10th, the two of them sandwiching the improving McLarens of Sergio Pérez and Jenson Button.

If the weather is dry on race day, he would be a fool who bet against Vettel, but all the forecasts suggest that the autumnal sun will not be in evidence tomorrow. A storm is predicted for around five in the afternoon, by which time the Grand Prix will be over, but intermittent drizzle is anticipated from dawn on, which points to ‘mixed conditions’ for the race.

That gives Sebastian’s leading rivals some cause for hope. “In a ‘standard’ race, in perfect conditions,” said Alonso, “we know it will be very hard to beat the Red Bulls, so anything else that happens tomorrow – rain or mixed conditions – can help us. 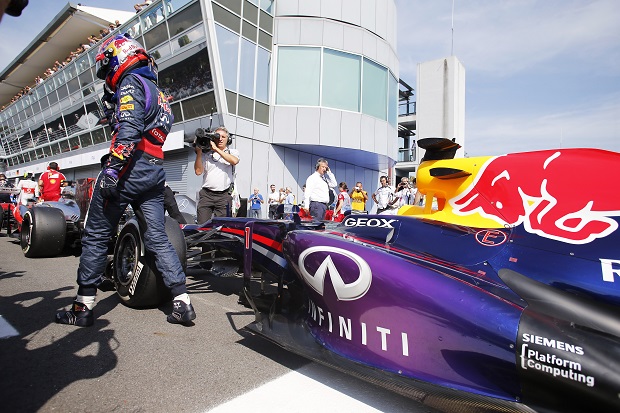 “If it rains, I think it’ll give us more of a chance, but we haven’t made change in the set-up to allow for that – I don’t think anyone does, actually, because if you put on a lot of wing, and it doesn’t rain, you just cannot race. I think all the teams will be in very similar condition, with very low downforce – and if it rains, we know how tricky Monza will be. For one thing one, you don’t have the downforce on a slippery surface, and for another, when it’s wet at Monza, you get bad visibility because of the long straights. So in those conditions, Monza is quite a stressful race – but still I hope it rains…”