Colin Chapman had his Archimedes moment whilst scrubbing up in the bath and thinking of F1 driver seat positions. Jim Hall took inspiration for the revolutionary Chaparral 2J fan car from a drawing sent to him by a young fan. The moment John Barnard’s ground-breaking F1 idea took flight was during a visit to British Aerospace.

“I went into this little room, where there was one guy working in there,” Barnard told Motor Sport. “They just had the usual tools you’d find in any workshop, which he was using to cut pieces of carbon fibre.

“I thought ‘Crikey! If this is how British Aerospace are making their carbon inserts, I’m bloody well sure I can do the same on an F1 car!’”

It’s now 40 years since Barnard’s Aerospace epiphany led him to creating the McLaren MP4/1, the first ever carbon-fibre-monocoque grand prix car which soon became the standard on the F1 grid – one both far lighter, stronger and stiffer than anything which had come before. Taking its first win at the 1981 British GP with John Watson, a modified version of the car would come to be the dominant force in F1 in years to come.

The former McLaren and Ferrari technical director took a break from his furniture design business – his current project is a carbon fibre chaise longue – to recall just how one of racing’s most out-there ideas came about. It began by being asked to design an F1 car for a team which didn’t yet exist. 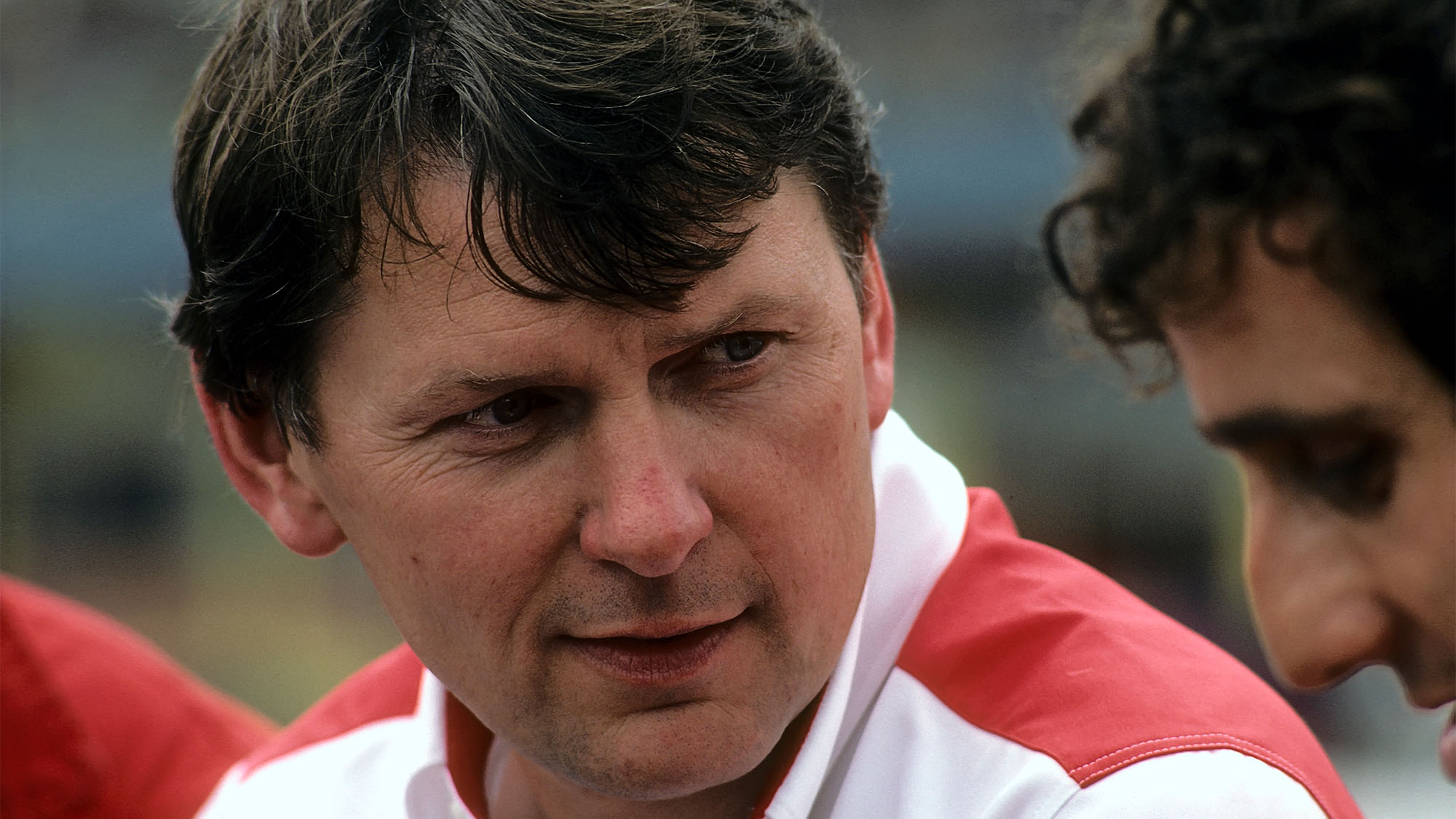 By the end of 1979, Ron Dennis wanted to take his Project Four Racing from Formula 2 up to grand prix racing’s top table. He just needed a car, and therefore someone to design it…

“I was sceptical, because I just having been involved myself in Formula 1 back in the ‘70s with Team McLaren, I realised that it had all moved on and was going to require, what we considered in those days, a lot of money,” Barnard said.

“Ron’s very persuasive. The deal was quite simple” John Barnard

“But, you know Ron’s very persuasive. The deal was quite simple. If he didn’t get the money [to carry on running the F1 project], he would give me another year’s contract salary, and I would be free to go.

Barnard had had a pretty non-stop involvement with racing in his career so far, but was now presented with a unique opportunity.

“Basically, I was looking at whole year ahead when I didn’t have to go racing with it,” he says. “So for me that changes [everything].

“You get that kind of situation once in F1, when you’re starting out – I call it a ‘freebie year’. Once you’re in and you’ve got a car to race, you’ve got to think about the next car at the same time.

“I thought ‘Right: how do I how do I take a step to give us an advantage over the others?’ 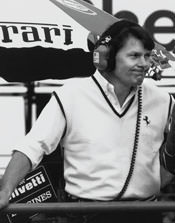 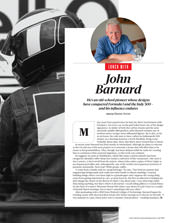 Many years have passed since he had any direct involvement with Formula 1, yet every car on the grid today bears two of his design signatures. As father of both…

Barnard had just come off a stint penning a ground-effect IndyCar for Jim Hall’s Chaparral team, the 2K, which would go on to win the 1980 Indianapolis 500 with Johnny Rutherford at the wheel. Furthering that aerodynamic advantage in F1 would ultimately lead him to his eureka moment.

“The thing was then we were all looking at ground effects in the underbodies on our cars,” he explains. “Having done the Chaparral, I could see there was obviously a lot of work to do under the car, one of them being to get a bigger underbody and therefore a better underwing.

“One of the issues was the chassis which needed to be very narrow, and that inevitably, would have lost torsional strength and bending stiffness, things like that. So I started thinking how I would make a chassis that would could be narrow and yet maintain all those other elements.”

A steel-skin monocoque was considered and then dismissed as being too heavy, but by then the idea of a carbon-fibre composite design was already percolating in Barnard’s brain. 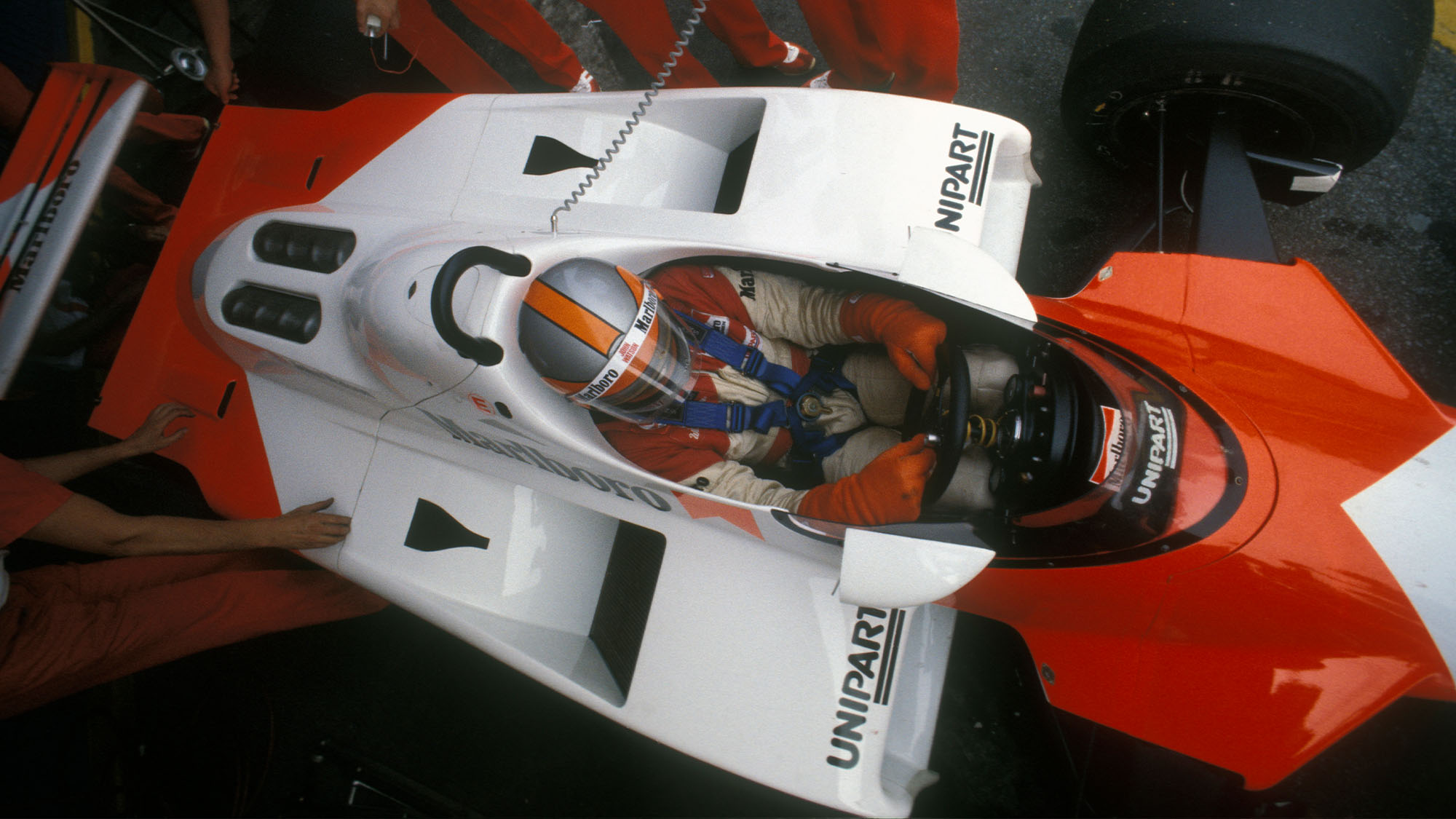 MP4/1 is readied for Argentina debut

The seed had been planted after seeing Embassy Hill reinforce wings with carbon-fibre (failing with tragic results at the 1975 Spanish GP) and a number of Gordon Murray’s Brabhams had carbon fibre panels in lightly loaded areas.

However, a day trip on a fact-finding mission would soon encourage Barnard to go the whole hog.

“I got the invitation to go and look at British Aerospace at Weybridge,” he recalls. “They were making the Rolls-Royce RB211 engine outer-cowling which was a carbon fibre–aluminium honeycomb sandwich.”

Wandering around the facility, it began to dawn on Barnard that he might have just found the material he was looking for.

“There were two things that happened,” he says. “Looking around the works at Weybridge, I went into this little room which there was one guy working in there. There were just bandsaws and vertical drilling machines. Nothing special, just the usual kind of stuff you’d find in more or less any workshop.

“The guy told me he was making carbon block inserts to put in the ‘sandwich’ to make hardpoint fixings – just a stack of carbon fibre cured into a solid block. He was cutting these out into shapes.

“The next thing, I met a guy called Arthur Webb. He was an old school, engineer, a bit older than me. He had come from the days of the slide rule, but in doing so had a tremendous knowledge of carbon and how you use that.

“I got talking to Arthur and the thing came out of that was that obviously carbon had the properties you wanted: it was strong and it was lightweight. There you go! There’s the fundamentals for making your narrow chassis with torsional strength,
bending strength and rigidity, and so on.

“That reinforced my thinking, and I went away to start thinking about how to do it.”

“It’s a very different way of thinking about the design,” he says.

“Doing the carbon fibre monocoque was a much, much more difficult and much more time consuming thing than just making an aluminium monocoque. 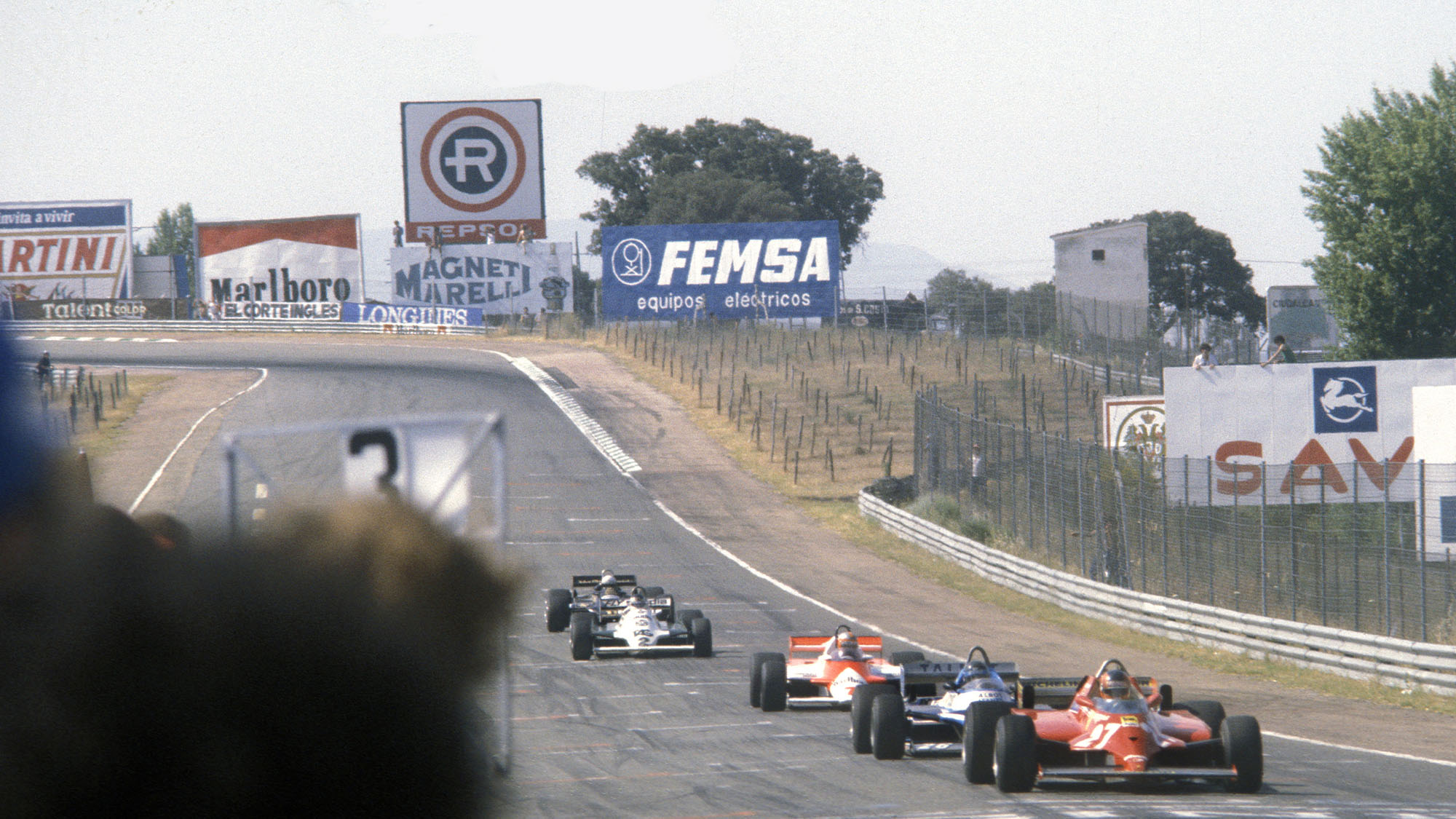 “With an aluminium chassis, you’d get a big sheet of aluminium, cut it into shape, fold, glue it and rivet it.

“With carbon fibre, you’ve got rolls of this stuff, which you’ve got to lay on a mould and cure, and then you’ve got your items.

“I then had to get these great big aluminium tools made and machined. There was a new process and ways to do things that we had to try and understand.”

There were also seismic changes on the organisational side of Project Four too: ones that would change the course of grand prix racing history.

“It was certainly a bit of squeaky bum time!” John Barnard

“Ron had a certain amount of money in his budget,” remembers Barnard. “We got the first monocoque made and back to Woking and I could see that things were getting tight!

“That was when John Hogan at Marlboro got involved, and the idea of joining forces with McLaren came along – in the autumn of 1980.

“Basically, we would not have been able to finish that car without joining up, because there was still a lot to do. It was certainly a bit of squeaky bum time.”

Now Barnard was shareholder along with Dennis, former team boss Teddy Mayer and team manager Tyler Alexander. Compared to the gargantuan operation of modern day F1 teams, Barnard’s design office had previously been a one-man band +1. He had been feeling the strain, but the McLaren match-up eased the load.

40 years on, John Watson recalls his watershed-moment 1981 British GP win, via a flick of the vees, stolen car radio, victorious BBQ – and the revolutionary McLaren MP4

“I’d drawn most of it with Alan Jenkins, but because the monocoque had taken so much time and effort, there was still lots of other stuff still to do: suspension, uprights, gearbox,” remembers Barnard. “So the fact of joining with McLaren meant I immediately had more people to come and help me help me finish the thing.”

With the new-look McLaren up against the clock, the MP4/1 had barely any testing before it was rolled out for the 1981 Argentine GP – with the inevitable teething problems ensuing.

“The exhaust pipe kept splitting,” Barnard remembers, “So we had to keep welding and reinforcing the end of it. It then started to burn the fibreglass bodywork, which is not particularly temperature resistant. Once we sorted stupid problems like the car burning itself, we could sort it properly and get going.”

The trajectory from there on was somewhat meteoric, a formerly wayward McLaren team suddenly finding its way again midseason with a new car and John Watson at the wheel: a run of third at Jarama and second at Dijon culminated with a famous victory at Silverstone. It was the winning proof of Barnard’s revolutionary idea, and a sign of the times at the new-look McLaren.

“Actually winning a race, it reinforced everything and said “Hey, this is the way to go and we go on from here’.

What also resulted was a political shift in the team. Now the old brooms, Mayer and Alexander would leave the team following season. McLaren International was here to stay as a winning force – Dennis and Barnard were in charge. 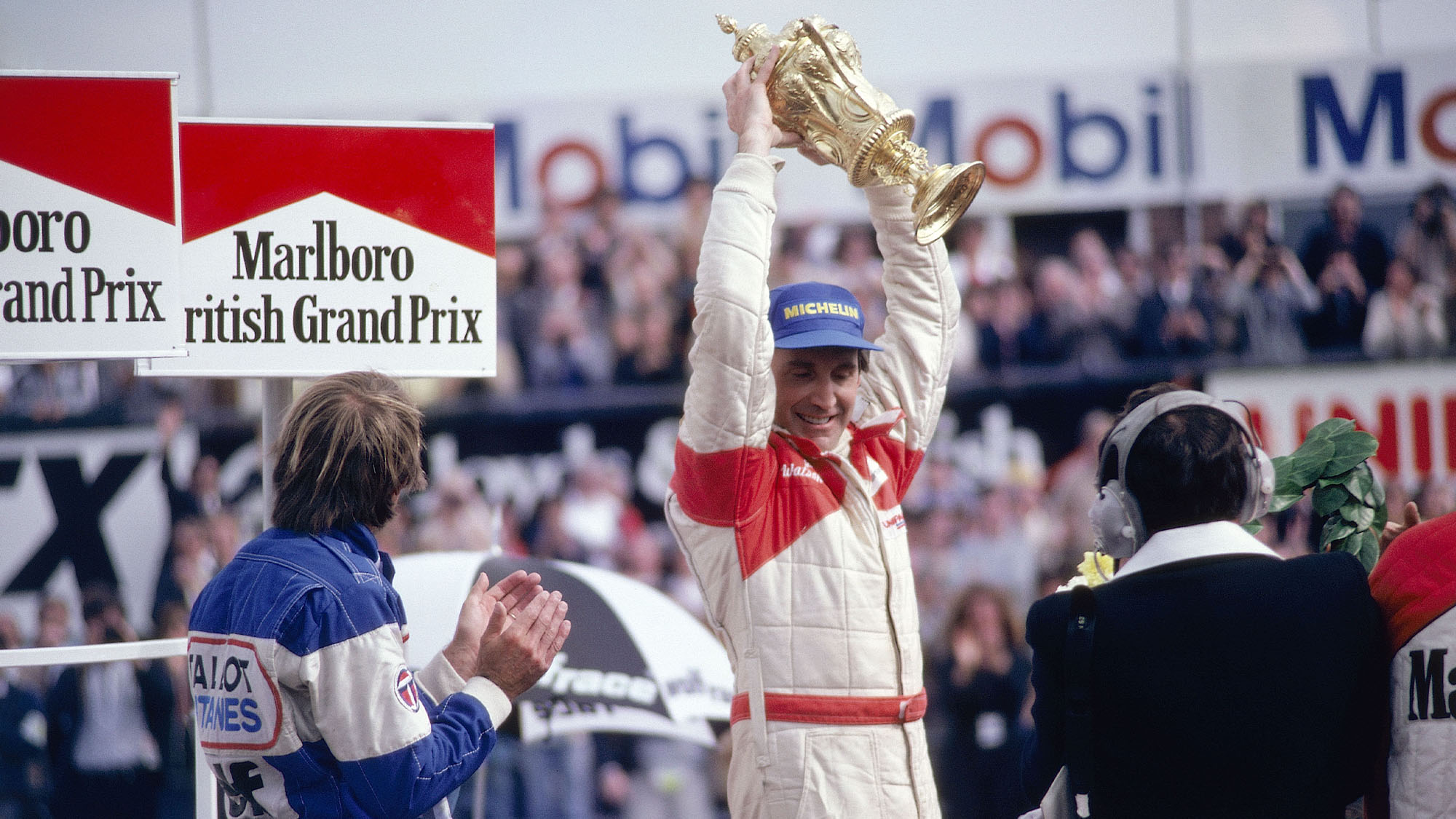 The car’s speed had been proved and its strength was underlined later in 1981 at Monza when Watson walked away from a horrifying 140mph crash.

“That disproved all the knockers,” Barnard says. “There were lots of people at the beginning that said, ‘Oh, carbon fibre monocoque, you should be very careful about that, when it hits something, you’re going to go up in a black cloud of dust.’

Carbon fibre monocoques would become ubiquitous on the F1 grid, the sea change fully initiated by Barnard’s innovation. He now ranks his creation as part of a trinity of original racing ideas.

The designer also credits Dennis for having the faith in a car design which simply had never been tried before.

“Ron had to take this completely off the wall idea and make it believable,” he says. “Had to explain why it was better, why it should be better, why we were going to do it.

“He had to be fully involved and right behind it, because otherwise, it wouldn’t have happened – we all had to be singing off the same hymn sheet.

“It was a very strong partnership in Formula 1, it was Frank Williams and Patrick Head at Williams, it was Ron Dennis and John Barnard at McLaren.”