The Charles Leclerc Monaco curse continues, but the Monégasque at least finally has a finish to his name in his home race.

After beautiful weather all weekend, rain had been forecast but Sunday proved warm and sunny for the most part, and the threat had reduced greatly, much to pole-sitter Leclerc’s delight. Then in the final hour before lights out – at least, what should have been lights out – the clouds gathered and started to just spit with rain as the grid got busier.

But it was only with 15 minutes to go that the rain started to get heavier, and the FIA appeared to panic. The start procedure was delayed to allow teams time to switch onto intermediate tyres, and a formation lap behind the safety car planned. That was then delayed again due to an incoming downpour, and two laps on full wets completed behind the safety car before the rain intensified and the red flag came out.

It took 45 minutes from that point for the race to actually start due to the heavy rain causing a power issue with the start systems, and Lance Stroll and Nicholas Latifi both highlighted the treacherous conditions (and some questionable driving) by crashing behind the safety car. Stroll ran wide at Massenet and picked up a puncture, while Latifi slid straight on at the hairpin.

Both came in for repairs as the race finally started, and at the end of the first lap Pierre Gasly led the two Canadians back into the pits for intermediates.

Once Gasly’s pace showed the intermediate was the tyre to be on, those near the back were keen to follow suit but the leaders continued to run on the full wets, with Carlos Sainz suggesting he could stay on them to then switch to slicks. But Lewis Hamilton triggered a raft of pit stops when he came in on lap 15 for the intermediate, with Sergio Perez following suit from third place one lap later.

It proved a masterstroke from Red Bull, aided by Ferrari then pitting race leader Leclerc for intermediates on lap 18. Perez jumped the home favourite, for who it would only get worse…

Ferrari then thought it was time for hard tyres as backmarkers all opted for slicks, and called both drivers in. At the last second, the team told Leclerc to stay out but it was too late, and he had to wait behind Sainz for his stop and lost valuable time.

Red Bull again made the right call by calling both of its drivers in immediately afterwards, double-stacking to better effect as Perez retained the lead ahead of Sainz and Verstappen jumped Leclerc for third place.

“Bittersweet especially because I was leading the race before the pit stop,” Sainz said. “And after the pitstop I had a terrible out lap behind a lapped car, cost me a couple of seconds of race time that was enough for Checo to jump me.”

There was controversy, though, as Verstappen appeared to cross the pit exit line, and then the stewards noted Perez for the same infringement despite his positioning being less clear cut. With no further mention of the incidents, it proved a scenario that would rumble on late into the night.

Expletive-filled radio messages also showed the frustration was clearly growing for Leclerc but as the top four bunched up amid lapped traffic it became clear how risky any move would be. First, Sainz got a run on Perez after the leader was blocked by scrapping cars in the final sector, but as the Spaniard pulled out of the slipstream on the pit straight he left the only dry line available and so nearly crashed.

On lap 27, a driver did crash and it was Mick Schumacher who dropped it out of the first part of the Swimming Pool section, ripping his car in two against the Tecpro barrier at the second part. Schumacher was OK, but the race was first slowed by a virtual safety car, then a full safety car, and finally red flagged to repair the barrier at the end of lap 30.

“I’m feeling alright,” Schumacher said. “Obviously it’s very annoying. I think in terms of pace we were definitely there, it’s just a matter of keeping it on track and unfortunately I wasn’t able to do that.

“The pace felt strong and it felt like we were able to attack and push, but unfortunately we just ended up being a bit too wide which was maybe a matter of 10 centimetres at the end and that’s enough to lose all grip that you thought you had and unfortunately the result is as it happened.”

Once the race restarted behind the safety car, another lap of racing was lost by allowing lapped cars to overtake as the procedure took too long, and the clock became the barometer for the total points on offer. The race needed to reach lap 58 within the time window to provide full points, with 40 minutes remaining when the safety car came in and a rolling start resumed proceedings.

There was a split in strategy at this point as Red Bull, Mercedes and Alpine all opted for new medium tyres to restart, while the rest – and most notably Ferrari and Lando Norris in sixth – were still on their existing hards from before the stoppage.

Ferrari’s thinking was there could be graining on the softer compound due to the lower temperatures, and it proved right as Perez started to struggle in the lead. The race ticked past lap 58 to be worth full points but there was just 1.7 seconds covering the top four as Perez fought some graining, backmarkers and the clock, trying to complete as few laps as possible.

It was an approach that would work out as he held on for victory in 64 laps, holding off Sainz, Verstappen and a livid Leclerc. 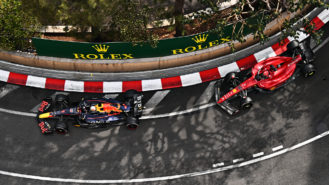 There’s talk – serious talk – that this might have been the last Monaco Grand Prix. Well, if so it signed off memorably. It took around an hour to get…

“Let down is not the word, some mistakes can happen, but there have been too many mistakes today, overall,” Leclerc said. “In those conditions you rely a little bit on what the team can see … I’ve been asked questions whether I wanted to go from extreme wet to the slicks, and I said ‘Yes, but not now, later on in the race’.

“I don’t understand what made us change our mind and go on the intermediates. We got undercut and I stopped behind Carlos. I mean, there’s been a lot of mistakes and we cannot afford to do that. It’s hard, as it’s been the other years here, so I’m getting used to getting back home disappointed.”

While apologising to Leclerc, Ferrari was also busy protesting Red Bull for the two drivers potentially breaching regulations exiting the pits, but nearly four hours after the race the result was confirmed.

“It’s a dream come true,” Perez said. “I mean, as a driver, you dream of winning here. After your home race I think there is no other more special weekend to win. So to do it and the way we did it, you know we just made it even harder for ourselves at the end. But it was just with the graining I had, to not make any mistake, to bring it home, but keeping Carlos behind wasn’t easy.”

Norris took the fastest lap after a pitstop with 13 laps remaining, reeling George Russell in but crossing the line 0.2sec adrift of fifth place.

Fernando Alonso was exceptionally slow after the race restart but held Hamilton at bay for seventh, the bunched nature of the field seeing Esteban Ocon demoted out of the points having crossed the line ninth, courtesy of a five-second time penalty for causing a collision with Hamilton at Turn 1. That promoted Valtteri Bottas and Sebastian Vettel into the top ten, at the end of a race that started late, in conditions that promised drama, but ended in a somewhat typical tense procession. 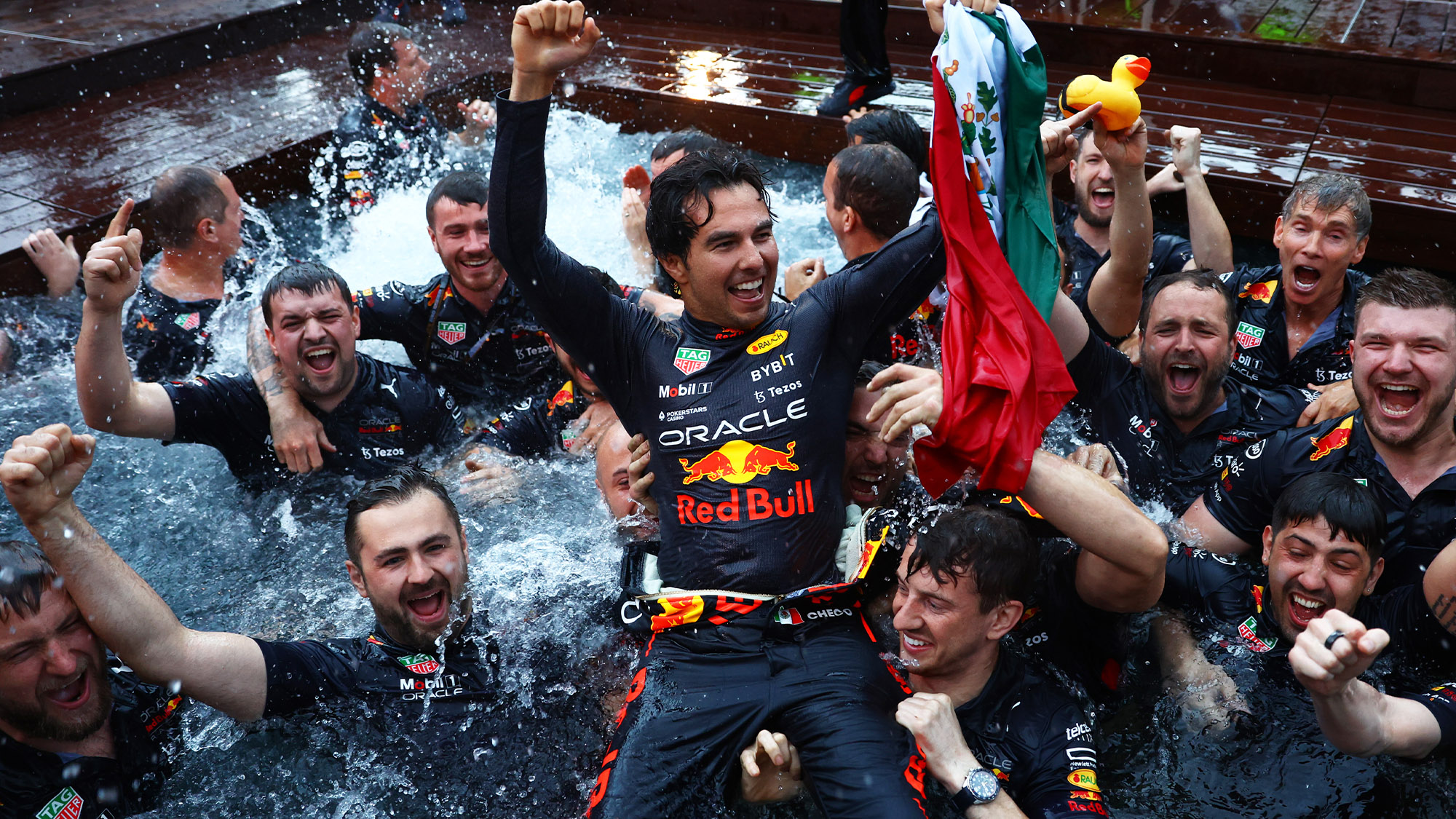