After all the seemingly endless hype and publicity, competitive action finally got underway with qualifying in Miami, and it was Charles Leclerc who had the magic required for pole in Florida.

The Ferrari driver held his nerve to deliver a blistering fastest lap, with his team-mate Carlos Sainz less than 0.2sec off in second.

A snap of oversteer ended Max Verstappen’s challenge, but the Red Bull will still start third tomorrow. Sergio Perez was close behind in fourth, whilst a solid session means Lewis Hamilton will start sixth behind Valtteri Bottas‘s Alfa Romeo.

Read about 2022 Miami GP qualifying as it happened below. 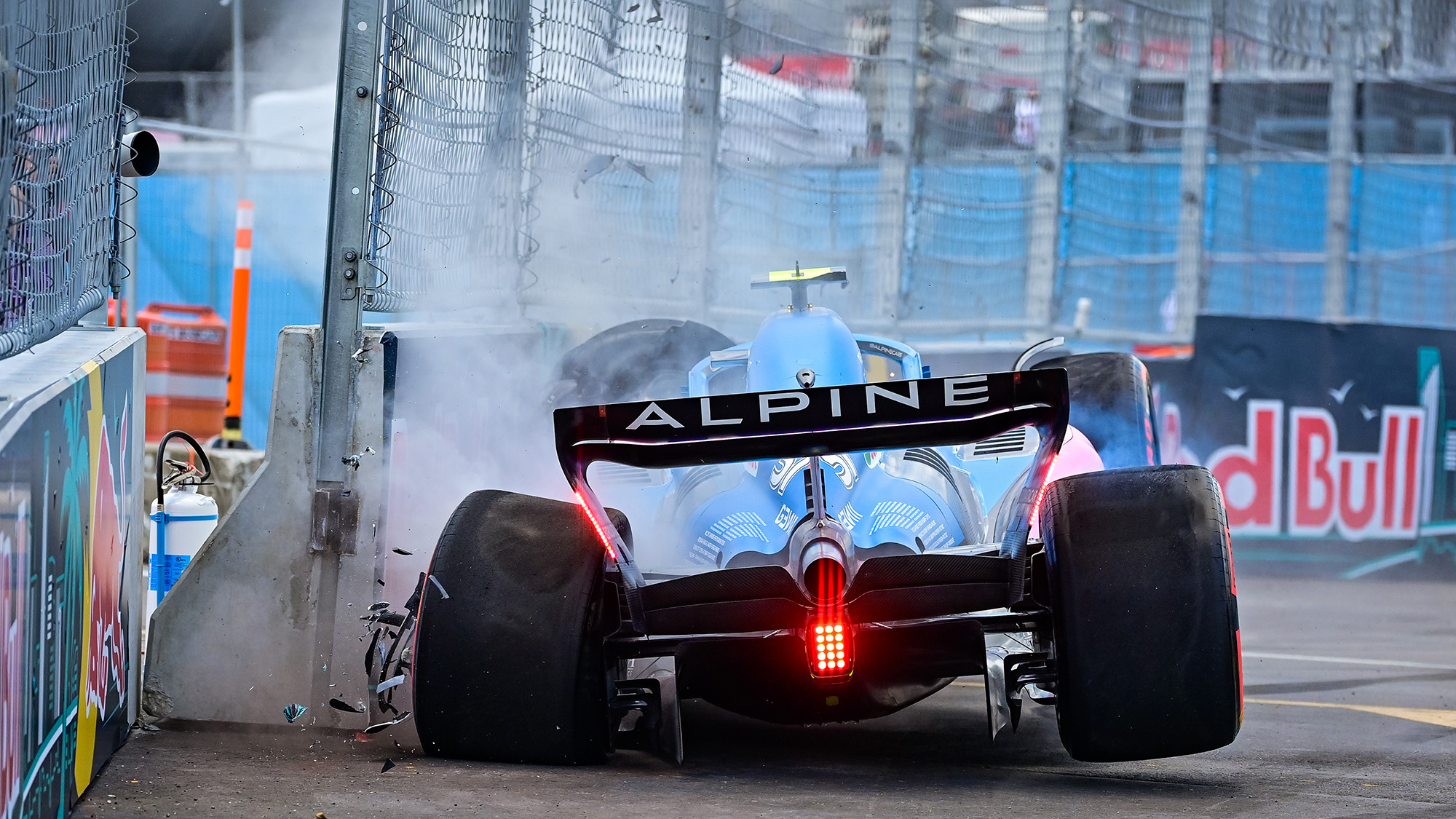 Cars hit a hot track – ticking over at 52C – as 15 of the 19 cars attempted to set an early lap. A cracked chassis from Esteban Ocon‘s FP3 shunt had ruled him out of qualifying.

Kevin Magnussen was first to clock a time but this was soon bested by Lance Stroll, the Canadian posting a 1min 31.789sec.

Daniel Ricciardo was 0.4sec behind in second, but it wasn’t long before both were shuffled down – Verstappen was now fastest with a 1min 30.235sec.

Perez soon came in with a lap time just behind his team-mate, but it was 0.5sec, the Dutchman with a rapid pace early on.

Russell was then third, 0.6sec off Verstappen, whilst Zhou Guanyu was an impressive fifth – a 1min 31.020sec lap put him there. 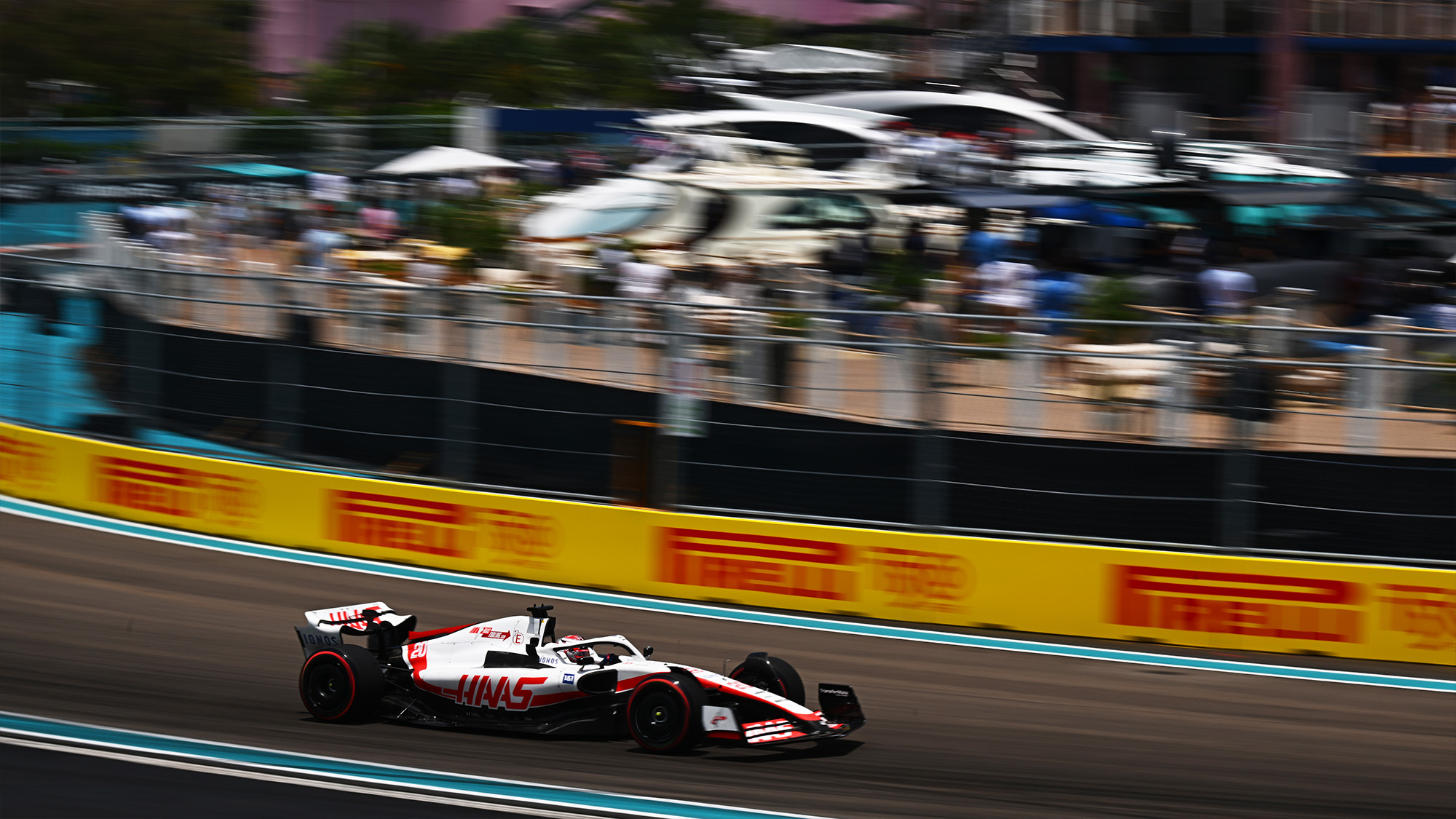 Kevin Magnussen was the fastest driver eliminated in Q1

Leclerc was soon beating a path quicker than Verstappen; the Monégasque went fastest with a 1min 29.474sec.

Hamilton was struggling to set a decent lap. Having aborted his first lap, and another was then deleted for exceeding track limits, leaving him down in 16th with five minutes to go.

Fernando Alonso was also exploring boundaries as he brushed the wall, but the Alpine was undamaged.

Alex Albon, Magnussen, Hamilton and Nicholas Latifi were squabbling to get out of Q1, but Yuki Tsunoda had no such worries – he posted a 1min 30.485sec to lift him to fifth.

Hamilton went back on track to try and get a fast lap him, but had 12 cars to negotiate on his out lap. The Mercedes driver managed it though, setting a 1min 30.388sec which left him fifth.

Once the flag fell on Q1, eliminated was Ocon in 20th, the two Williams of Latifi and Albon 19th and 18th, Zhou in 17th and a surprise in the form of Magnussen in 16th. 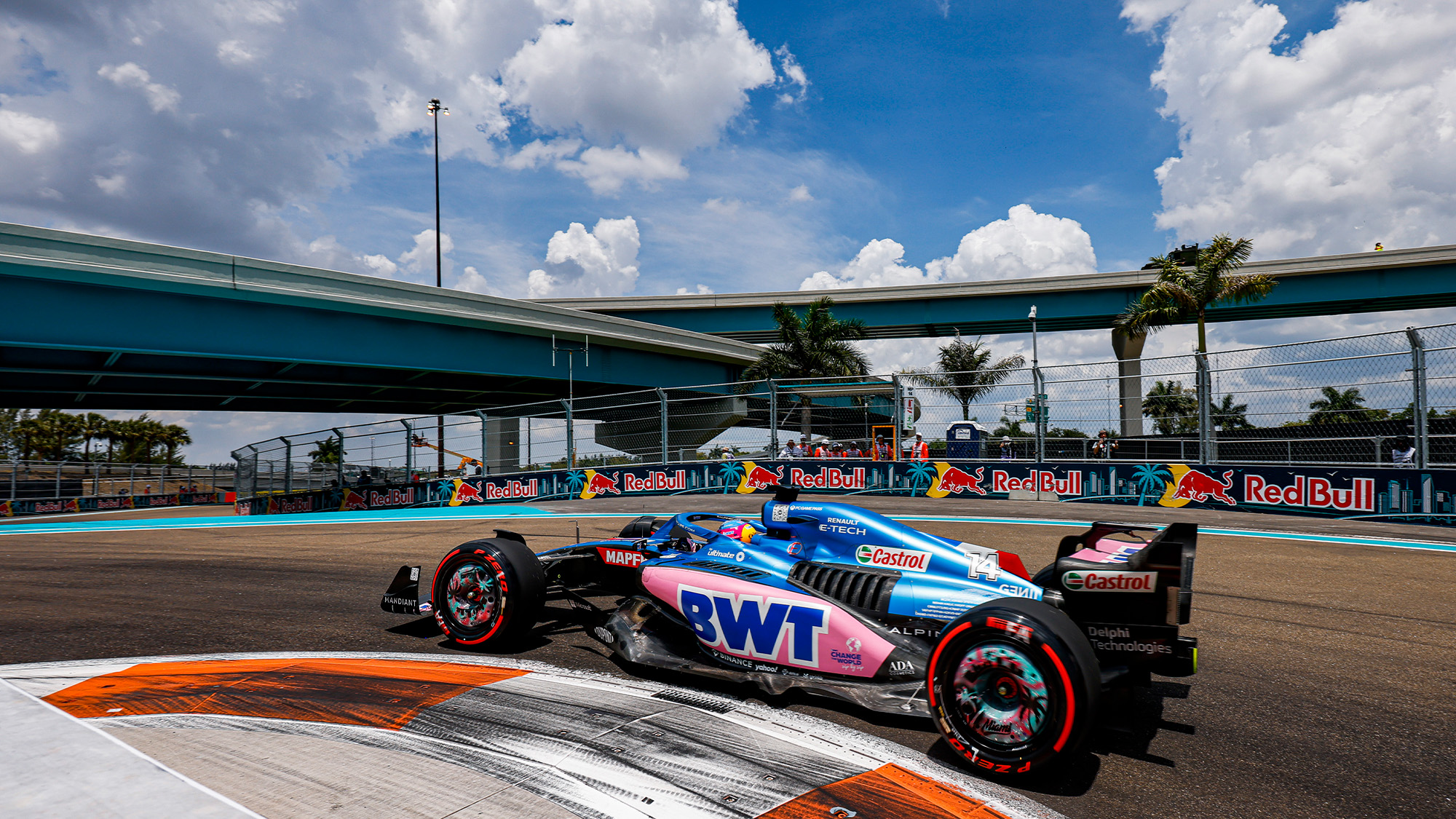 Mick Schumacher headed out first, posting a 1min 30.423sec, but Sainz immediately saw this off with a 1min 29.729sec, with Leclerc 0.03sec further off.

The Red Bulls were even faster though – a 1min 29.673sec putting Perez second and Verstappen heading to the top with a 1min 29.202sec lap.

Hamilton went fifth, almost 0.6sec off Verstappen, with Gasly a further 0.4sec away from the Mercedes. 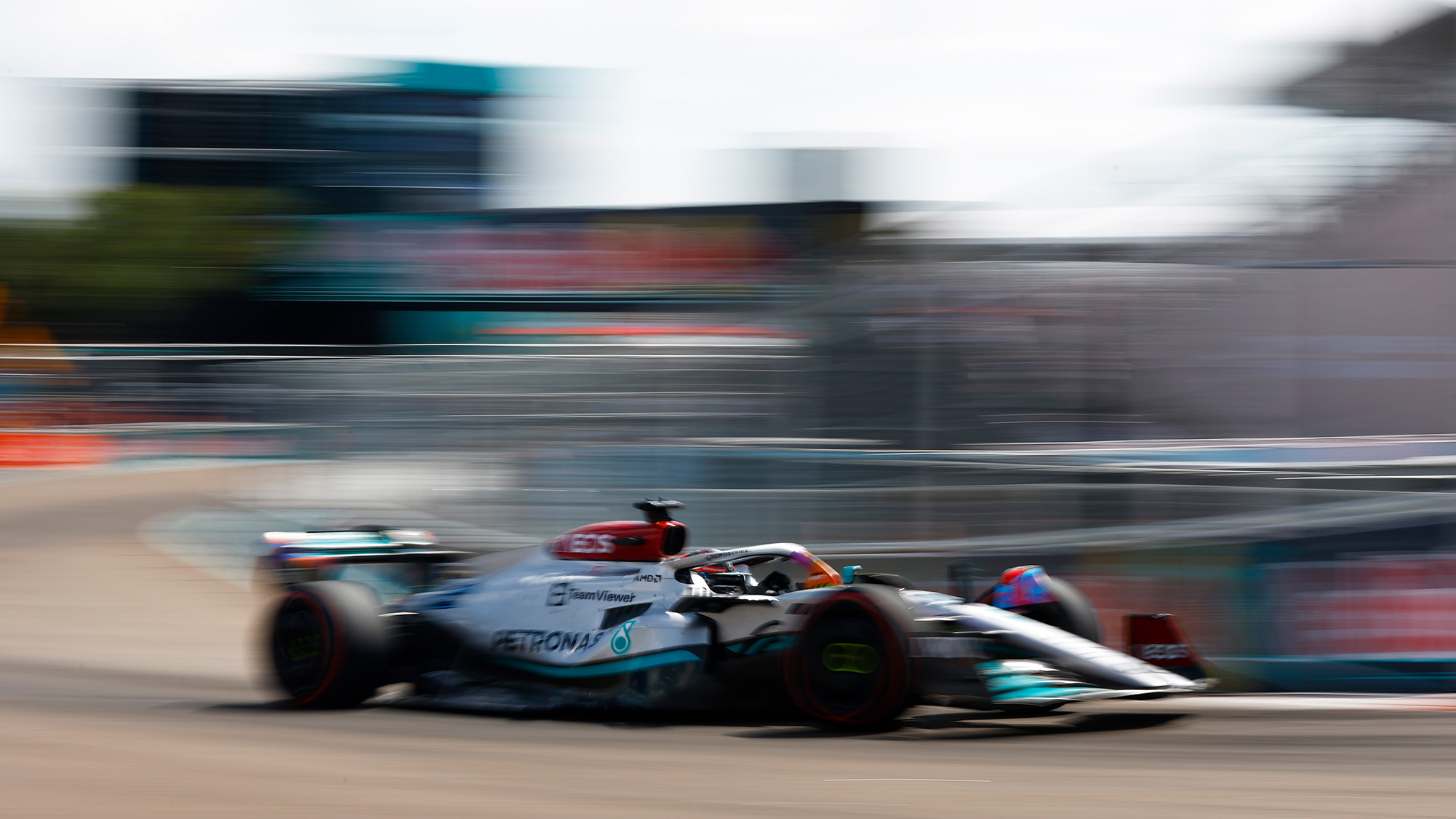 By this point Russell was yet to set a lap, and when he did head out on a track a massive moment of understeer meant the Mercedes driver had to call the run off.

Leclerc by this point had deposed Verstappen at the sharp end, but only just – he was 0.072sec ahead.

Russell did eventually put up a time on the board, seventh-quickest with 1min 30.173sec.

With two minutes to go, both McLarens were in the Q2 elimination zone – Norris and Ricciardo were 11th and 15th respectively.

Woking needn’t have worried about the Englishman though – a 1min 29.634sec meant Norris ended the session third, but a fellow countryman wouldn’t be so successful – Russell ended the session 12th, 0.045sec off Tsunoda in 10th.

There were a number of other surprise knockouts, including Alonso in 11th, and Ricciardo in 14th. Filling out the rest of the elimination zone was Sebastian Vettel in 13th and Schumacher in 15th.

Leclerc was first to set a quick lap, 1min 29.055sec his opening gambit as Q3 got underway, with Sainz 0.02sec behind.

Verstappen was even quicker though – a 1min 28.991sec put the Red Bull on top.

Perez came in fourth, half a second off his team-mate on the first run, whilst Hamilton was sixth 1.2sec away, Bottas inserting himself into fifth. 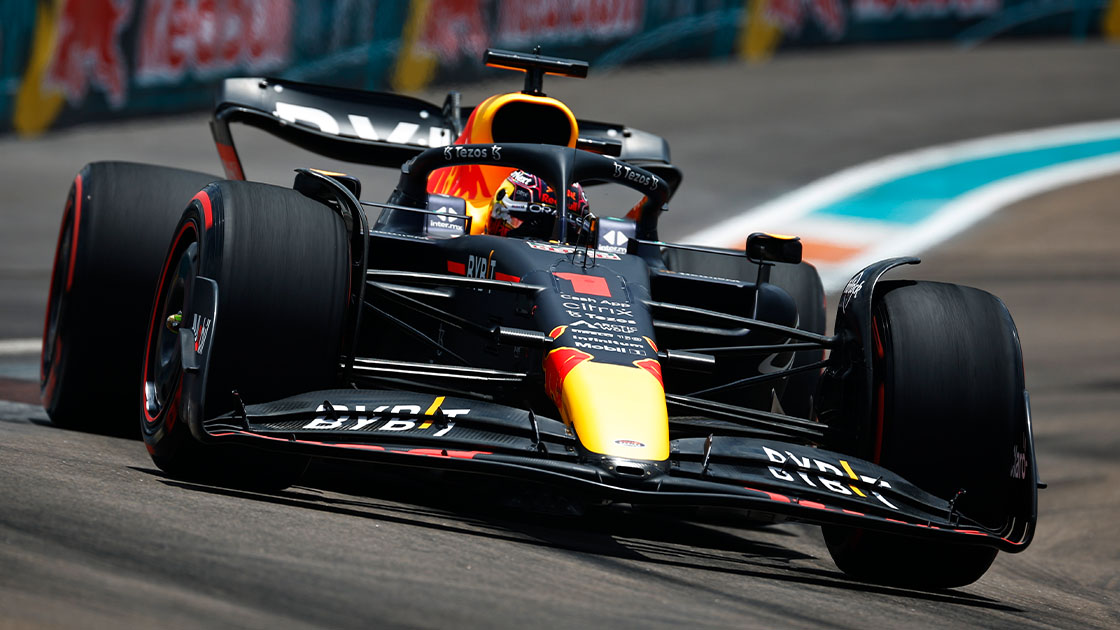 All eyes were on track as the final runs commenced, with Stroll going out first and Leclerc behind him.

The Ferrari driver went a tenth faster than Verstappen in the first sector, but Sainz was even faster – 0.25sec up.

Come the end of the lap though, it was Leclerc who could keep it all together: 1min 28.796sec secured pole, with Sainz 0.190sec off.

Verstappen’s lap never happened, but his first effort good enough for third. “I f***** it,” he told the team on the radio, oversteer stymying his challenge.

Perez improved to get within a tenth of his Red Bull stablemate, whilst Bottas was 0.4sec off – the Alfa Romeo’s 1min 29.475sec means he’ll start fifth tomorrow.

A solid 1min 29.625sec for Hamilton will see him to sixth on the starting grid tomorrow, Gasly’s time 0.06sec off the Mercedes meaning the AlphaTauri will join it on the fourth row.

A 1min 29.750sec means Lando Norris was close in eighth, with Tsunoda ninth and Stroll filling out the final position.