Charles Leclerc took pole in a dramatic and crash-filled qualifying, as his team-mate Carlos Sainz and Yuki Tsunoda both crashed out within seconds of one another at the same corner in Q3.

Lewis Hamilton fought back from a poor practice to qualify second, with Max Verstappen third.

Daniel Ricciardo also went into the barriers in Q2, whilst Lance Stroll and Antonio Giovinazzi suffered similar fates in Q1. 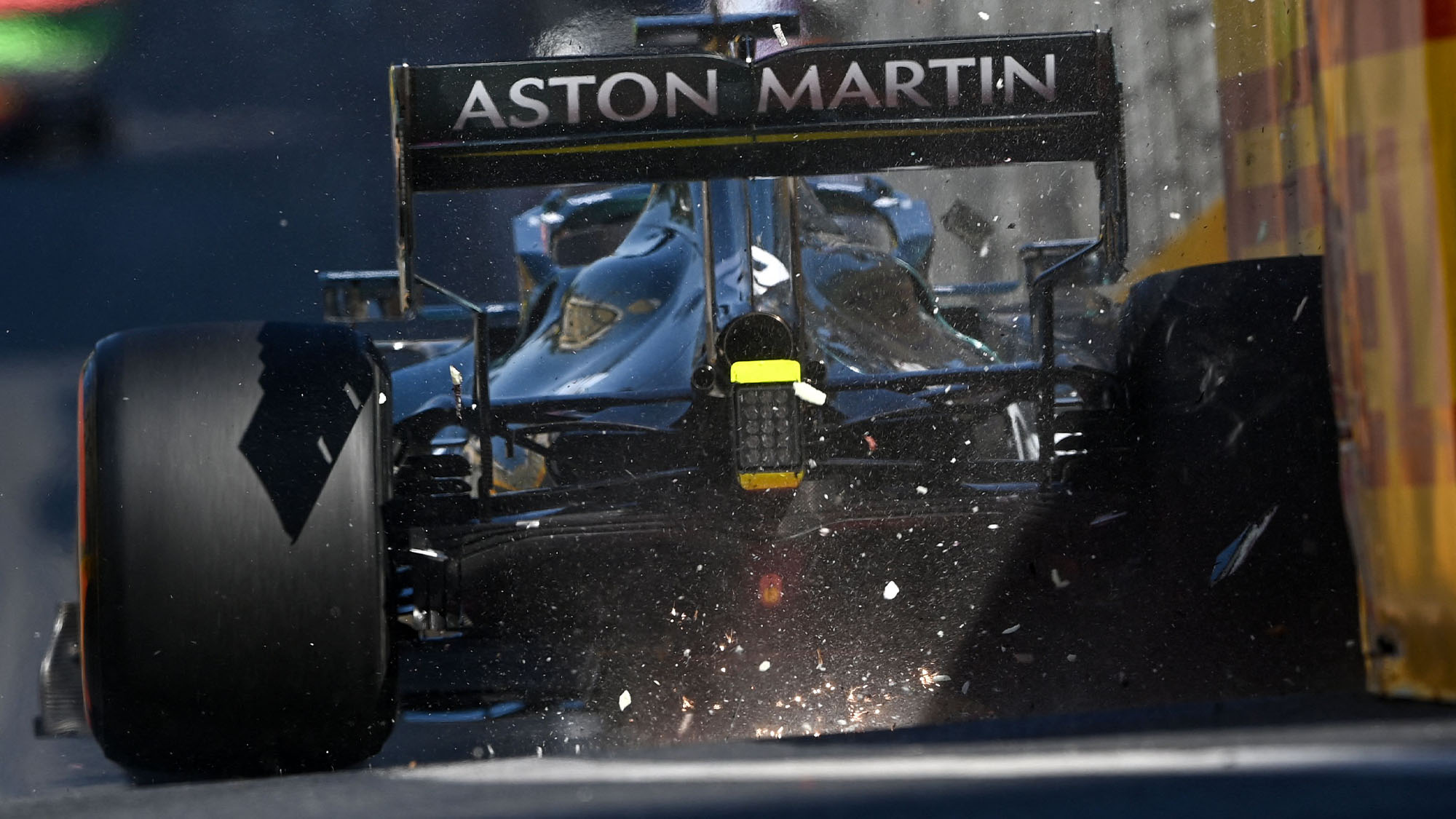 It was an early bath in Baku for Lance Stroll, who followed Max Verstappen and Charles Leclerc in practice in falling foul of Turn 15 on his first flying run, sliding into the wall and taking off the left front wheel of his Aston Martin.

The session was red-flagged, but once running started again Verstappen set the early Q1 pace with a 1min 41.760sec, his Red Bull team-mate Sergio Perez two tenths behind him. The two Ferraris of Carlos Sainz and Charles Leclerc followed respectively.

The session was then stopped again as Antonio Giovinazzi crashed his Alfa Romeo at the same corner as Stroll.

Williams’ Nicholas Latifi was first of the eliminated as he went out in 16th. Behind him was the Haas pair of Mick Schumacher and Nikita Mazepin respectively. Giovinazzi and Stroll will start 19th and 20th. 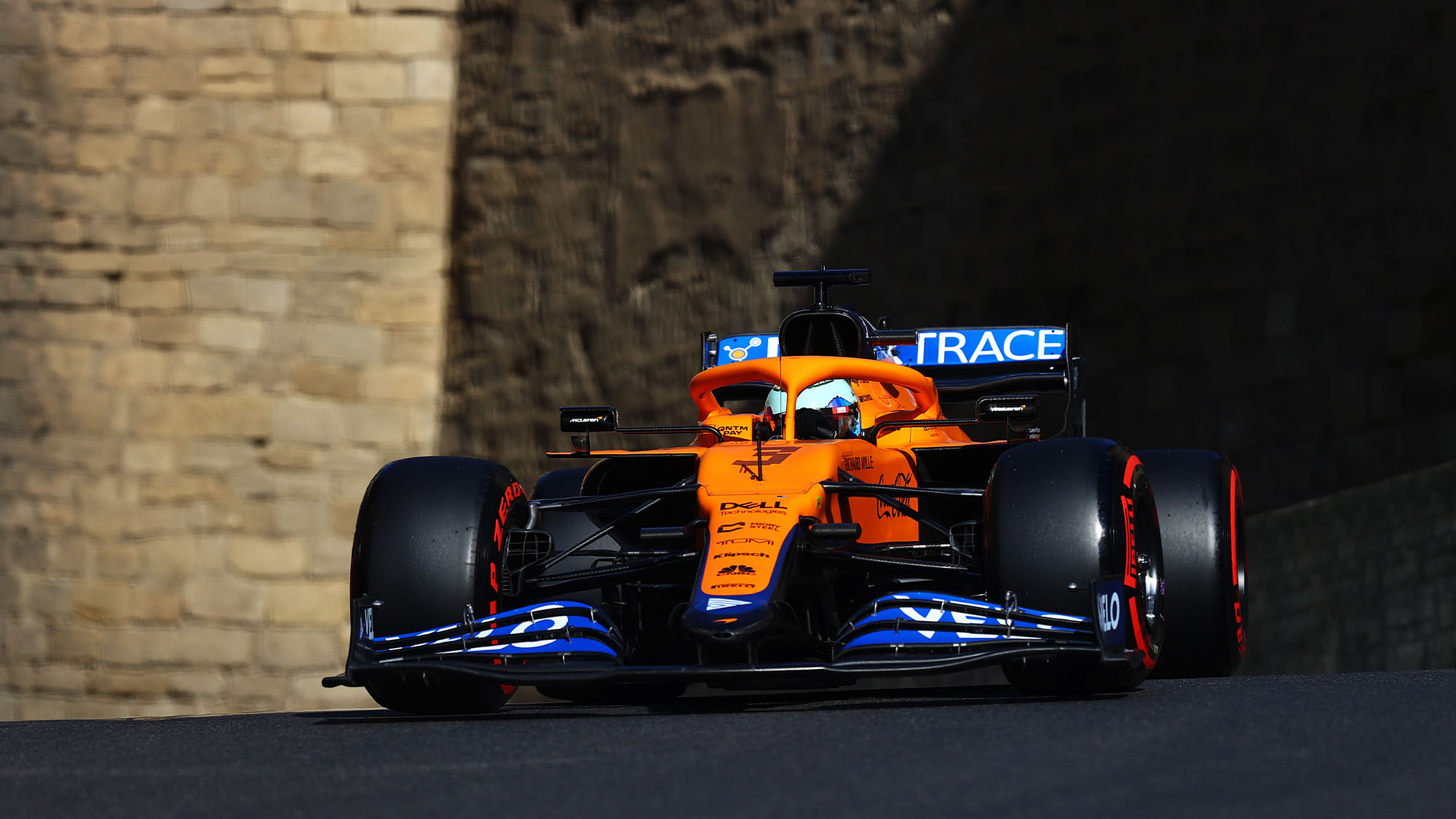 Q2 was slightly less eventful, although there was early congestion in the pitlane as Sebastian Vettel rushed to get out of the pits and almost collided with Sergio Perez.

The Mexican didn’t seem to mind too much as he went top after the first runs, Lewis Hamilton‘s Mercedes 0.004sec behind in second. Leclerc was 0.1sec behind the Red Bull, with Sainz and Verstappen filing in fourth and fifth.

As the second runs commenced, Verstappen then 0.005sec quicker than his team-mate, managing to set his lap without a tow.

Q2 came to a sudden end as the Honey Badger binned it, Daniel Ricciardo going off at T3 and burying his McLaren into the wall.

As a result, Vettel just missed out on progressing – he’ll start 11th tomorrow.

Behind the German was Esteban Ocon, half a tenth behind. Ricciardo will line-up 13th, ahead of Kimi Räikkönen and George Russell, whose Williams team performed a miracle to change his power unit in two hours after it failed in FP3. An engine change normally takes four hours. 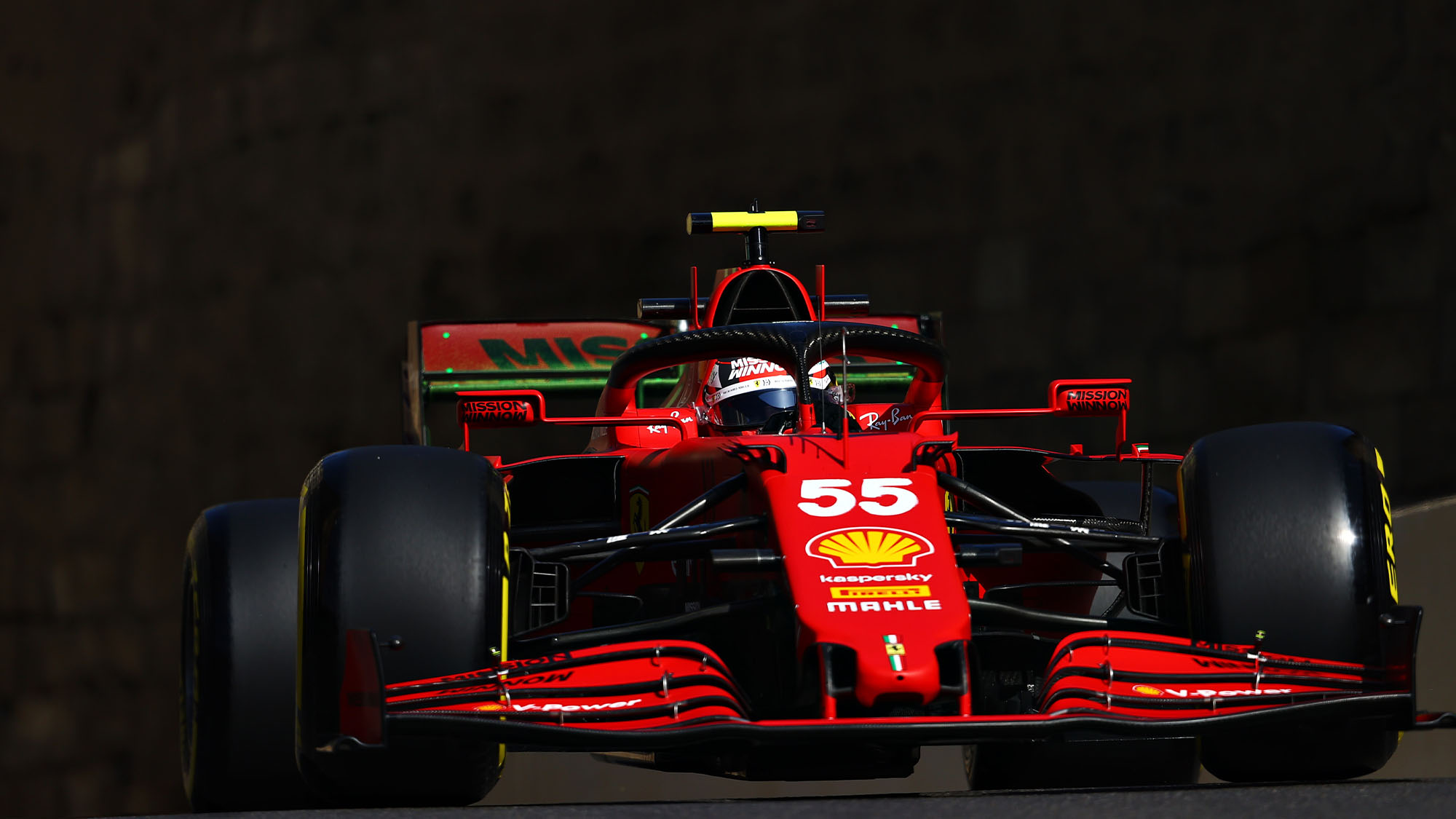 Keen to avoid yet more red flags, all cars but the AlphaTauris headed out straight away in the final qualifying session.

Charles Leclerc went fastest first of all with a 1min 41.218sec – Hamilton was 0.2sec back with Verstappen 0.3sec behind.

Sainz was third with Lando Norris fourth, though the McLaren man had a pitlane speeding infringement being investigated by the stewards hanging over him. 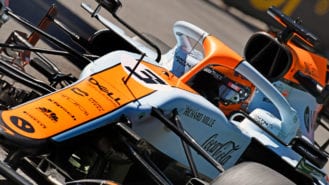 It was frantic stuff as all the cars headed out for all their final runs. Cars crawled as each searched for a tow down the main straight from each other.

Things then all came to a head at Turn 1 as Tsunoda and Sainz both crashed within seconds of one another.

The Japanese buried his AlphaTauri at T3 before the Ferrari driver span off spectacularly in sympathy, taking his front wing off – he was lucky not to do more damage.

The session was then ended before anyone could set another lap.

As a result, the top five was Leclerc, Hamilton, Verstappen, Gasly and Sainz – who may need a gearbox change.

The under-investigation Norris was sixth, with Perez behind. Fernando Alonso and a beleaguered Bottas, who was sent out early to give Hamilton a tow on the first run, coming home 9th and 10th.

*Under investigation for red flag infringement in Q1