Lewis Hamilton was under no illusions that he and Mercedes had just been thoroughly trounced as F1 returned to Zandvoort and Max Verstappen delivered a dream result for the wildly approving crowd.

“I think today we probably needed everything to be perfect to even have the slightest chance of getting past him through strategy, for example,” he said. “Pit stops needed to be on point, strategy needed to be on point and traffic also – but none of those three were ideal today, so…”

Around the high downforce-rewarding curves of this place the Red Bull-Honda was just faster than the Mercedes, its advantage never more apparent than into and through the banked Hugenholtz corner where the W12 was unable to take the ideal approach as it exited from the quick Turn Two.

Had Verstappen put together a properly clean lap in Q3 and had his DRS not failed at the end of it, he’d have secured pole from Hamilton by over 0.3sec rather than a few hundredths. That was one of the moments when this race might have got away from Verstappen despite his performance advantage. There were a few more too:

In qualifying, with DRS deployed, the Red Bull went through the speed trap at the end of the straight at 308.7kph (192mph), absolutely the slowest car, as the drag induced by all that downforce held it back. Hamilton’s Mercedes was reaching 314.5kph (195mph) at the same spot. Without DRS and with the Merc getting a tow behind it, that difference was potentially greater at the end of the first lap. 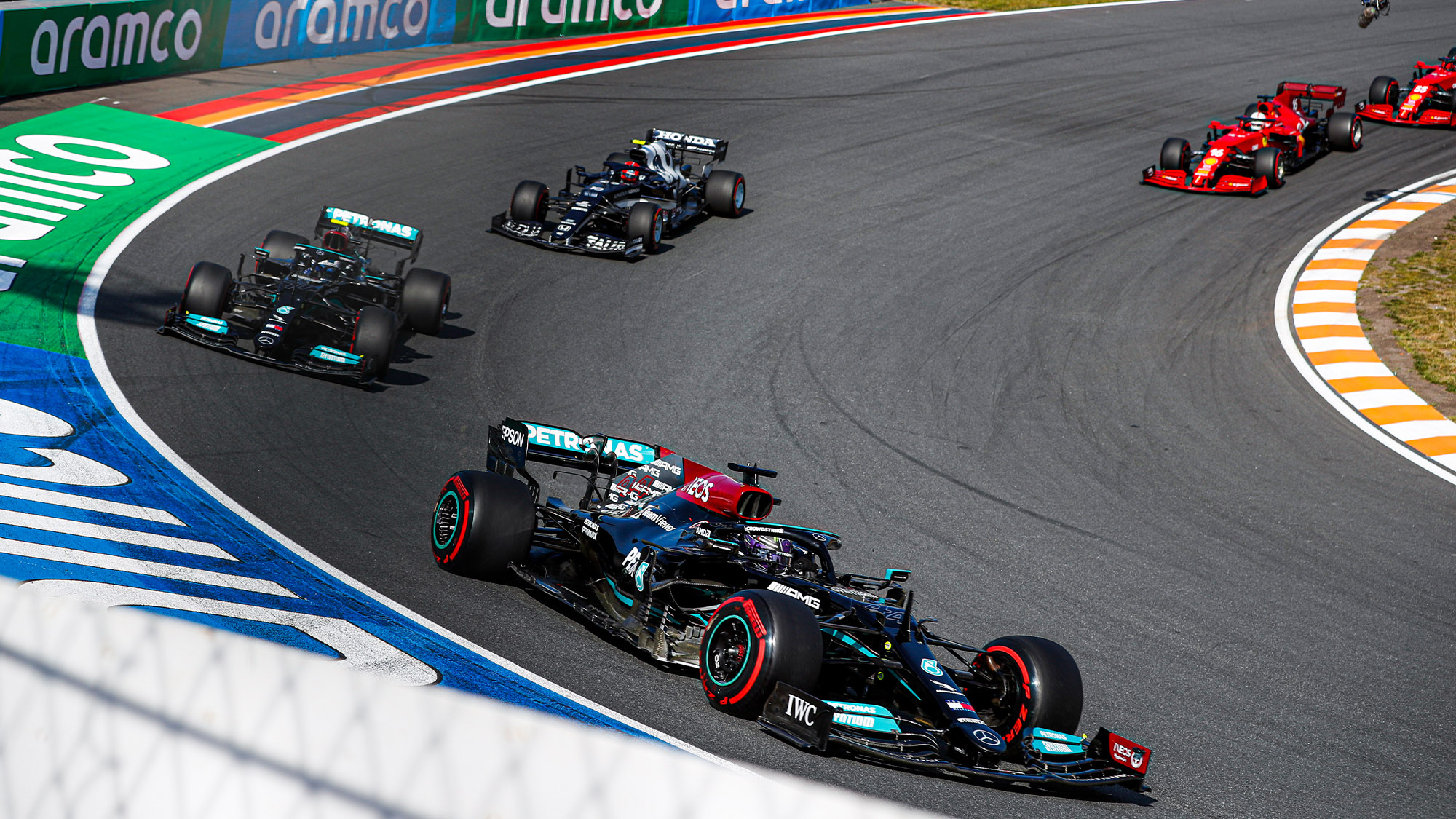 Verstappen therefore had to ensure he pulled out enough of a gap before the straight that Hamilton was unable to slipstream by. Verstappen was a man on a mission on that first lap with a beautiful start and then carrying hugely more speed through the Turn Two/Three sequence. That gap just increased visibly every time the track turned and the crowd gave its tumultuous approval as Verstappen crossed the line for the first time already 1.7sec ahead and going away. That end of straight speed difference was of no consequence now.

“The way he feels the grip and brings the tyres in instantly is fantastic,” said team boss Christian Horner later. “We’ve seen it before with Max, that ability to read the grip level when it’s uncertain.”

For the rest of the afternoon Verstappen used his performance advantage to pull out the gaps when necessary and just monitored and managed in between, while the crowd roared its approval. This is just the way a performance advantage plays out in this era of F1 where tyre deg and safety cars mean that putting ever-more distance on your rival would be foolhardy. But it gave Mercedes hope, even if Hamilton was pretty sure it wasn’t warranted. “They were just playing with us,” as he would later say. 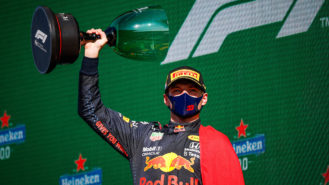 Mercedes had no answer to Max Verstappen, who reclaimed the championship lead with an authoritative display, giving the Dutch a win they have craved for so long

On the 20th of the 72 laps Mercedes brought Hamilton in from 3.5sec behind. Red Bull responded the next lap, did a faster stop and got him out still comfortably ahead. Such an early stop suggested they were two-stopping. Valtteri Bottas, on the other hand, having run a much gentler pace in third while still pulling well clear of the Pierre Gasly-led second group, was one-stopping. This was part of a Mercedes plan of a strategic pincer movement on Red Bull, which couldn’t counter that given that Sergio Perez had got knocked out of qualifying in Q1 through an operational misjudgement, and would indeed start from the pitlane (he eventually come through to eighth).

So Bottas was left out there leading on his old tyres as the new-tyred Verstappen quickly closed him down. This was a potentially treacherous phase of the race for Red Bull. Could Bottas back Verstappen into Hamilton? Could he bring Hamilton close enough to Verstappen that Lewis could go for the undercut in an early second stop?

Lap 30 – just 10 after Hamilton’s first stop – and Verstappen couldn’t quite pass Bottas on the straight, trapping him into the old-tyred pace through the rest of the lap where passing is just not feasible. Here was Hamilton’s chance and he took whole chunks out of Verstappen to be almost up with them by the end of the lap. But a Bottas wobble through the chicane made it easy for Verstappen to slipstream him up through the short straight and the final flat-out blast onto the 18-deg banking. The Red Bull was past even before the DRS zone. Had Hamilton pitted on this lap he’d likely have undercut past Verstappen, but it would have been wildly early. So Red Bull would’ve left their man out there for a more ideally-spaced set of stints, and a huge grip advantage in the final one.

The pincer had failed. 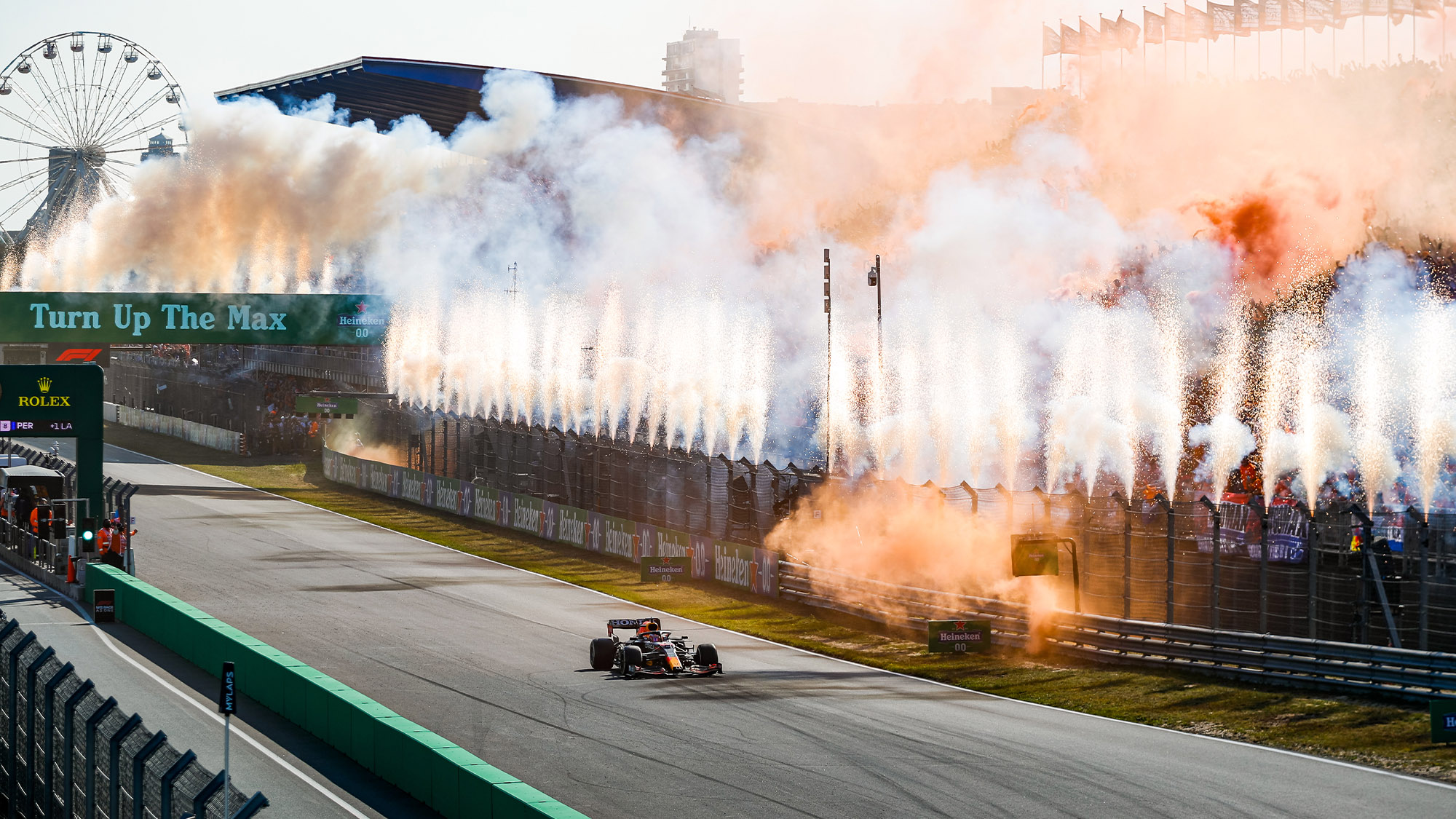 Victory was all but assured for the last 20 laps

Hamilton held the gap at around 1.6sec for the next few laps but Verstappen then suddenly began lapping 0.7sec faster and Hamilton had no answer, Mercedes brought him in before the gap got even bigger. That was lap 39, with Verstappen responding once more on the following lap and remaining comfortably ahead. But now on hard compound tyres to Hamilton’s mediums.

Hamilton did indeed seem to have a little more tyre grip and he gradually closed the gap down, but in the near-certainty he’d not retain that advantage by the time he caught up. That’s how it played out. Hamilton lost tyre temperatures as he lapped a couple of backmarkers and dropped around 0.5sec. In response Verstappen stepped up the pace, like he’d just been cruising all along.  Hamilton’s challenge was over.

The crowd got to enjoy the last 20 laps watching their hero extend his lead, retaking the lead of the championship as he did so. With a third stop, Hamilton had just the consolation of an extra point for fastest lap on a new set of softs, on the final lap of this intense little track.