Mark Hughes evaluates the Mercedes W09 on its release 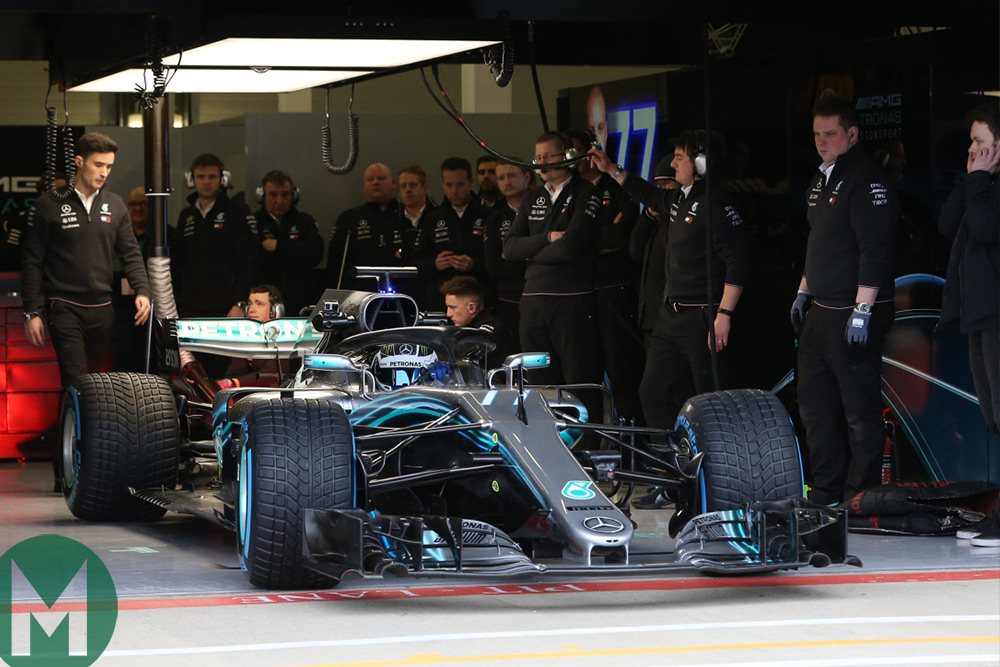 Mercedes has stayed resolutely with its pre-existing technical concept with its 2018 W09 model. It features an identical wheelbase and a low rake angle that will be slightly higher than last year but barely noticeable to the naked eye. Mercedes talks of ‘refinements’ to last year’s car rather than conceptual re-evaluation. The team’s low-rake/low-drag approach was unique last year and remains so in 2018.

This brought its difficulties last year, but the team is clearly confident it can retain the upsides of the concept – great aero efficiency – while minimising the awkward downside (mainly a certain inflexibility of set-up).

The letter box-style sidepod openings are quite Ferrari SF70H.

Uniquely, Mercedes has combined such high radiator inlet openings with the high-mounted front suspension it pioneered last year. Every other car so far shown has either coupled high suspension/low rad inlets or lower suspension/high inlets. The advantage of having the radiators high-set in this way is aerodynamic in that the sidepods can have a more sculpted undercut, helping accelerate the upper-surface airflow on its way towards the back of the car. The faster the flow, the greater the downforce.

Conventionally, a high upper wishbone – with extensions on the wheel upright allowing it to be mounted actually higher than the top of the wheel – has been used to give an uninterrupted flow to low-mounted radiator inlets, with the radiator airflow travelling beneath the wishbones. With a conventional lower wishbone height, the airflow to high-mounted radiator inlets travels above the wishbones. However, the W09, with a combination of high wishbones/high rad inlets uses a dramatic-looking long lateral fin atop the side guide vanes to scoop up the air from beneath the suspension and wash it upwards directly into the inlets. This would seem to allow the possibility of using the space cleared beneath the high suspension to further boost the speed of airflow around the sidepods and back. It could just be that the generous length between front axle and sidepod has created the flow capacity to allow this double benefit, whereas on a shorter wheelbase car you can only have one or the other.

One downside of mounting the radiators (and suspension) higher is that it increases the centre of gravity height – which is already been pulled in an unwelcome upwards direction by the fitment of the halo. The higher the centre of gravity, the more the cornering forces are multiplied upon the tyres. But Mercedes clearly feels that the aero advantages outweigh the mechanical drawbacks.

So is the W09 a stubborn refusal to follow the concept that has proved very fruitful elsewhere? Or a manifestation that there are many ways to skin a cat?