After driving in place of Sergey Sirotkin in the first practice of the Spanish F1 Grand Prix, Robert Kubica remains hopeful of a comeback… and realistic on Williams’ performance 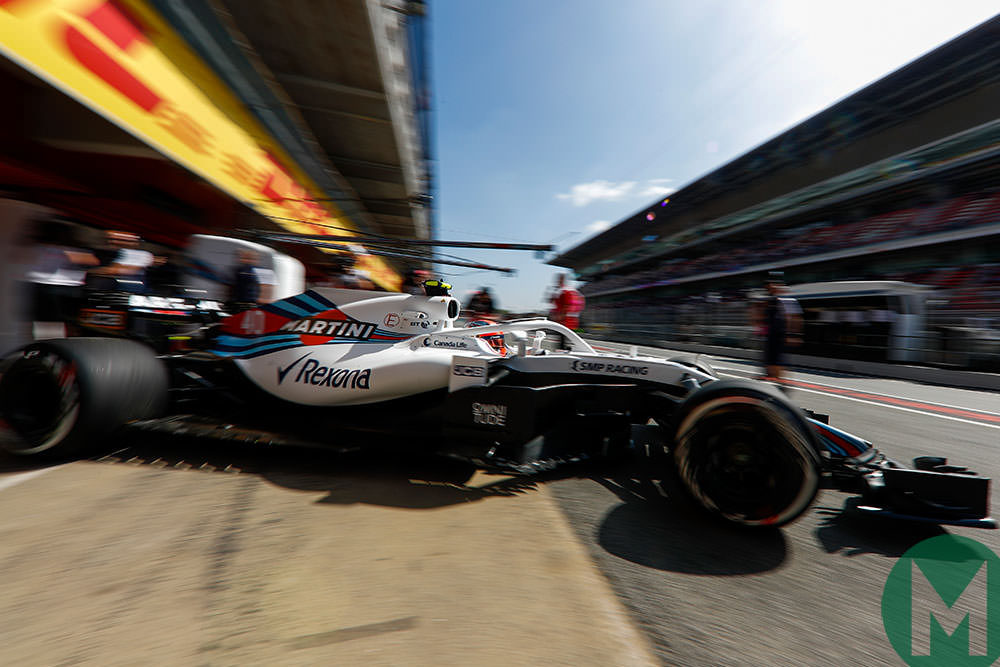 The FW41 is currently a very long way from being competitive, so he was never going to set the world on fire, and indeed the two Williams cars were lodged solidly at the bottom of the timesheets. However, Kubica could take some cheer from the fact that his best lap was 1.2sec faster than that of team-mate Lance Stroll. Even before Stroll finished his session prematurely in the gravel trap, Kubica had lapped 0.8sec faster on the same compound of tyres.

Afterwards, a visibly relaxed and happy Kubica reflected on this landmark in his recovery from his rallying accident of eight years ago.

Asked if it had been an emotional experience, he reflected: “I was more emotional last year when I was jumping for the first time in the car. Although I’m not driving often, it’s already six, seven, eight times I’ve driven an F1 car. It’s becoming more natural, which is good. Whatever sport you do, you look at what you’re doing is becoming natural because it gives you better comfort, better way of doing things. I was expecting to be more emotional. Once you crack on the engine and you leave the garage, it’s a question of – my job is always the same. Whether it’s FP1 or testing – it’s to deliver good feedback and get on the pace as soon as possible because in the end I don’t know how many times… more than two months ago I have been driving here. It’s not easy. Things are changing. Conditions are different. But I did manage pretty well. And I’m happy.”

Did he take cheer from being faster than Stroll? “No,” he replied deadpan. Why not? “Because I know my value. I don’t have to look at lap times. It sounds strange. Often people forget motor sport is a sport. All sportsmen are practising and training as often as possible. I know that if I would have a chance to drive the car every week, like permanent race drivers, there is more room to improve. Already now, I have seen it in winter testing, when I jump in after two months, and I have seen it now. Whatever is missing is only a question because I’m doing it every two months – if there is something that is missing.

“I drive like my body and what my limitations allow me. After my accident, I discovered to do a roundabout in a road car, you don’t have to grab the steering wheel. You can use friction to turn. F1 is not a road car but I have also been in the school where they give you a bird in the hand and you have to hold it so it doesn’t fly away, but you can’t hold it too tight that it gets scared. This is the way you have to hold the steering wheel.

“When I was racing in the past, once in Malaysia, one of the first weekends I was doing in 2006, there was footage when you saw me driving with three fingers open. I remember engineers were shocked. They said: ‘why?’ I said: ‘I don’t know, probably you don’t need to use all power you have, you just have to use what is enough. Probably the way I drive is enough what I’m doing otherwise I would not be here, otherwise I think I will not have this opportunity or tests last year and I would not have planned to do 160 laps in an F1 car. It looks different than 10 years ago. And it looks different to the others.’ The outcome is the same or nearly the same.”

Moving away from his personal performance and onto that of the car, he summarised the FW41’s problems as: “The same as three months ago! I’m not the right person to go too much into the details. We know exactly what is our weakest part of the car. We’ve started a project which should help us to understand better, improve it and hopefully solve it completely. But it’s not a question of one day or one month – probably it’s even more. So we have to be patient. Miracles will not happen, we will have better tracks, for example Baku. Coming to Barcelona, I was expecting to be in a difficult situation and FP1 was even more difficult than expected. We will try to help our main drivers with the balance of the car, to make it easier for them to drive.

“Performance is a different story. We have to fix our many issues, in order to think about performance and trying to attract the maximum from what we have. We have to somehow understand we’re in this situation, but apart from being slow, it was nearly impossible to keep the car on the track. That’s something we need to change, in order to make our drivers’ lives easier.”

There was a moment where the instant machine-gun response stumbled. It was when he was asked if he would relish the opportunity to race this car. He started, stopped, smiled, looked to the ground, waited a few seconds – and eventually said something non-committal about the car’s state of competitiveness. But to be out there, sitting on the grid, waiting for the gantry lights to go out… that’s a dream that lives with him still.

He wouldn’t be doing this, wouldn’t be testing the car again here on Wednesday if he didn’t believe that someday, that scene will be a reality.