As we wait for the F1 season to finally get going, just imagine what it must be like for Nicholas Latifi, the only rookie in the current field and scheduled to be making his grand prix debut with Williams. But at some indefinite time and place.

Seeing how the rookies adapt and what level of promise they show is always one of the most fascinating elements of a new season. Last year’s crop of Alex Albon, Lando Norris and George Russell was a particularly good one. While we wait for racing to get underway, we are going to take a look at some of the notable grand prix debuts in F1 history. Beginning with that of Stirling Moss.

Giuseppe Farina was intent on putting the upstart in his place. “I think he was annoyed,” recalled Moss. “I was this new boy and he was a very important figure.”

Moss’s world championship-status grand prix debut came in the opening race of the 1951 championship, the Swiss Grand Prix, albeit at the wheel of an F2 car. Using F2 cars as grid fillers was quite a common practice by F1 race organisers in these early post-war years as F1 struggled to get re-established. Not only in championship-status grands prix, but also in the scattering of non-championship events. So by the time of Moss’s official first appearance in the world championship, he was already quite familiar with racing his F2 car in a field that included grand prix machines, often from factory entrants including Alfa Romeo, Ferrari and Maserati.

Moss had been enlisted to the F2 team of HWM in 1950. The partners in that team – George Abecassis and John Heath (both of whom also raced the cars) – had signed him in 1950 as his ‘Boy Wonder’ reputation was burgeoning from his F3 performances. HWM was the specialist racing team formed from the Hersham & Walton Motors high-performance garage Abecassis and Heath had formed. Heath was the engineer who designed the HWM racer, using a twin-cam 2-litre engine from Alta, another specialist British engineering concern. 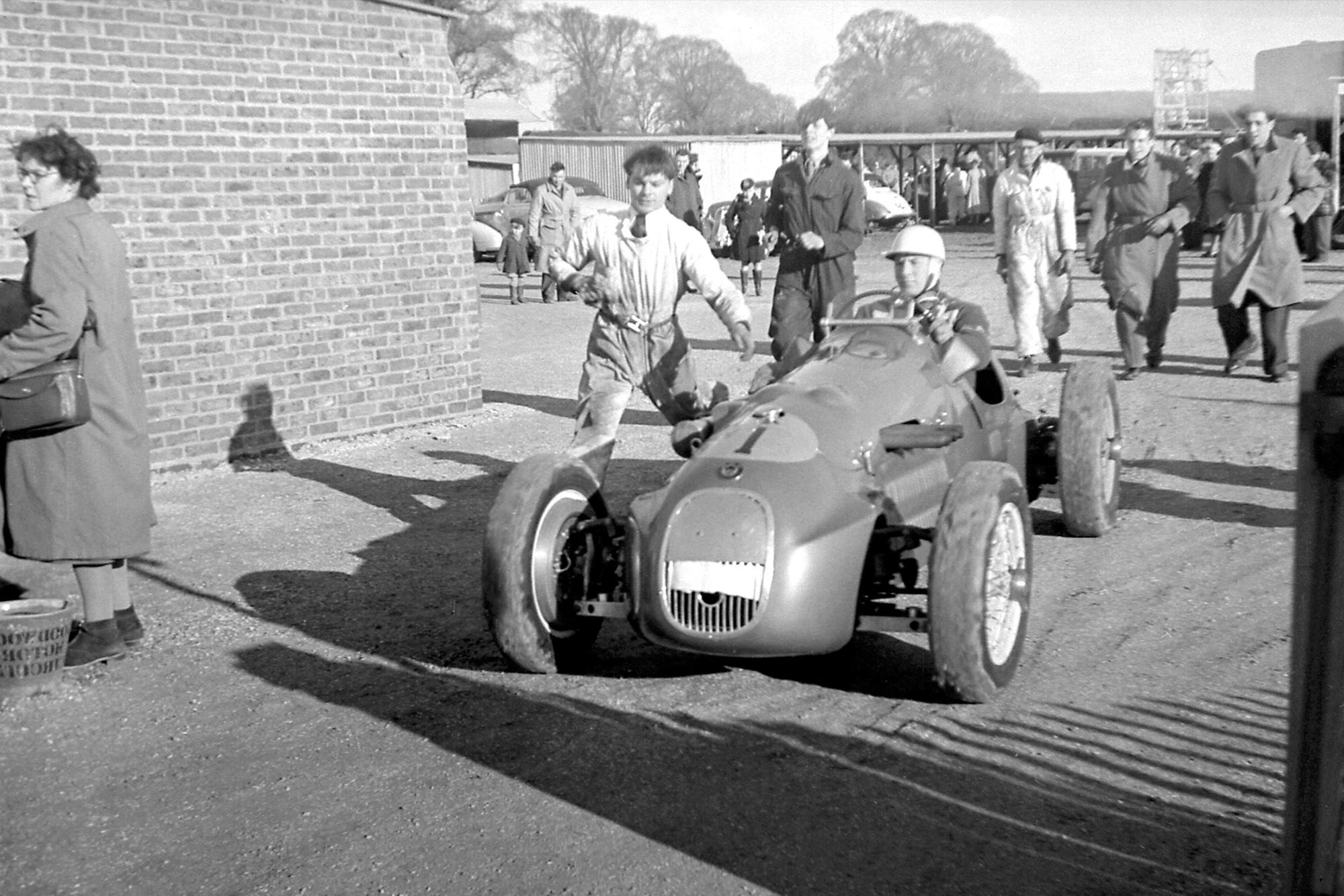 Racing in continental Europe paid good start and prize money and HWM even found it could make a profit from its very tightly-budgeted operation by shrewdly targeting the races in which to compete. Especially with someone of Moss’s already-obvious speed to pedal them along. So Moss’s first experience of what could loosely be termed ‘F1 races’ came in 1950 non-championship events. At Goodwood on Easter Monday the cars were not in top form but Moss made a sensational impression in the later Rome Grand Prix around the Caracalla circuit. He was running third behind the dominant supercharged F1 Ferraris until a hub broke and a wheel parted company with the car. He followed this up with a fantastic third place at the Bari Grand Prix, having briefly taken the lead as the F1 Alfa Romeo ‘Alfettas’ made their refuelling stops. Reigning world champion Giuseppe Farina was intent on putting the upstart in his place as he quickly caught the F2 car back up and went to pass. “I think Farina was annoyed,” recalled Moss. “After all I was this new boy and he was a very important figure. In any case, he came alongside me going into a corner and just stayed there. He shut the gate on me. He gave me the alternative of slowing down or going into a wall. But I slowed right down, got on his tail and then, because what he’d done had put him on the wrong line, I got back ahead of him coming out. He then repassed again quite easily in a big fury and following through was Fangio in the other Alfa – and he was laughing his head off at what had just happened. Fangio endeared himself to me from that moment onwards.” 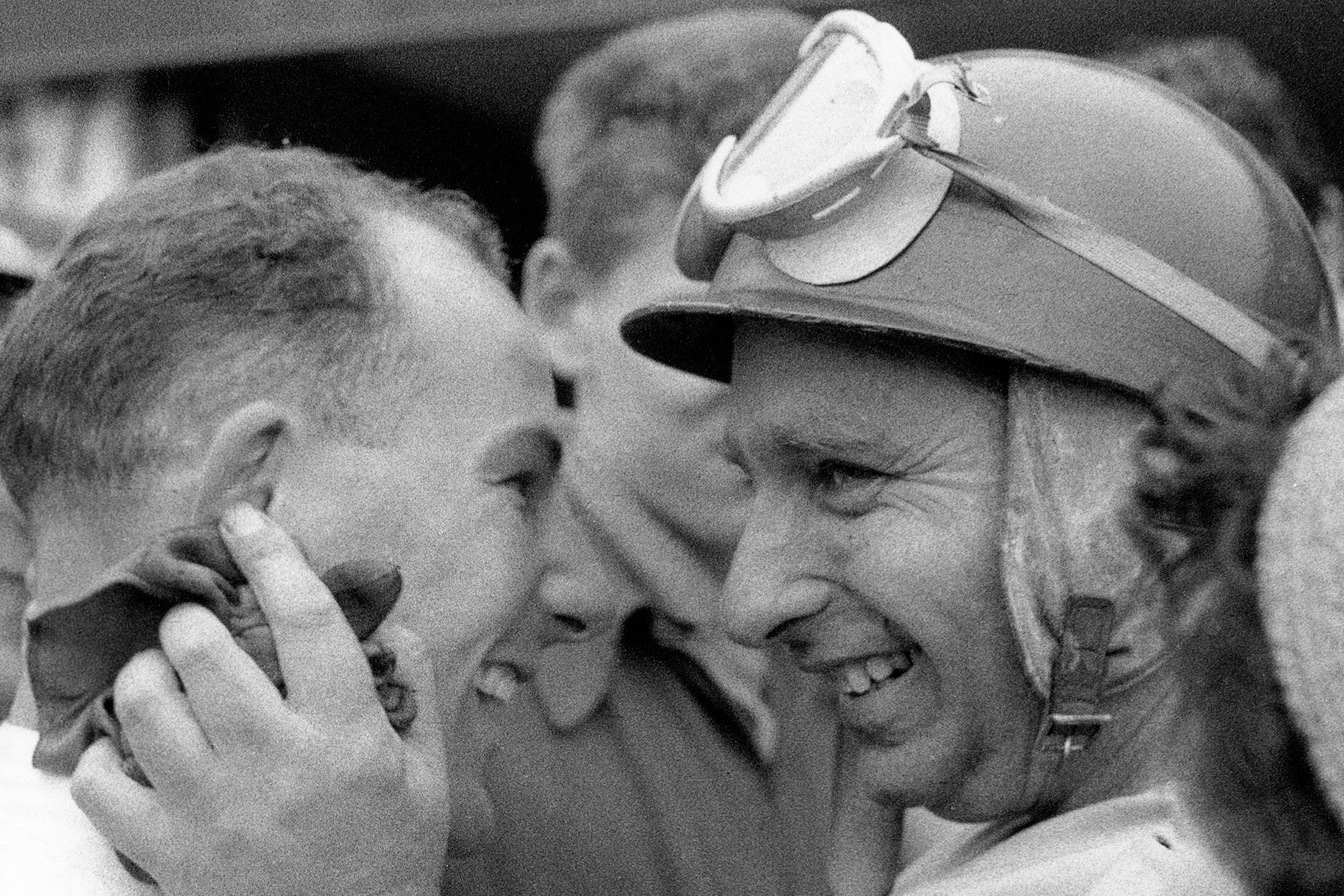 Moss and Fangio, here at Aintree in 1955

For 1951 HWM made a lighter, more powerful version of its F2 car. It was in this that he made his official debut in the F1 championship, by contesting the Swiss Grand Prix around the 4.5-mile Bremgarten circuit which wound its way around parkland north of the city of Berne. Moss had raced here when it had been an F2 event the previous year but this time he would be reacquainted with the formidable Alfettas which, with twin-stage supercharging, were now producing in excess of 400bhp from their 1.5-litre straight-8s, compared to the 130bhp of Moss’s F2 car. Backing up Fangio and Farina in the Alfas were Consalvo Sanesi and the local, aristocratic racer Toulo de Graffenried. Ferrari was there with its 4.5-litre un-supercharged 375 model for Alberto Ascari, Luigi Villoresi and Piero Taruffi. They were backed up by three privately-entered 1950-spec supercharged Ferraris. Other F1 entries came from the Talbot Lago team. 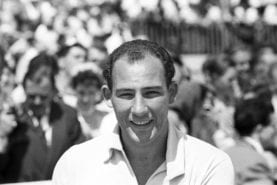 Fangio set pole ahead of Farina and the Ferrari of Villoresi. Moss qualified convincingly quickest of the half-dozen F2 cars, at 14th overall in between the F1 Talbot Lagos of Froilan Gonzalez and Yves Giraud-Cabantous. At 107 per cent of Fangio’s pole time, in an F2 car, this was more than respectable.

The race took place under conditions of heavy rain and was won in brilliant fashion by Fangio who, after leading from the start, suffered a pit stop delay that allowed team-mate Farina to be 5sec ahead after they’d both rejoined. He caught, passed and pulled away from his team mate and rival, this the foundation for Fangio’s successful world title campaign that year. Taruffi drove an inspired race for Ferrari. Taking over the later-spec Ferrari of Ascari, who was in pain from burns inflicted in an earlier race, Taruffi came through the field – and passed Farina’s Alfa on the last lap.
This time Moss was not close enough to get mixed up in their battle, but took an incident-free eighth place, two laps down but winner of the F2 class. So the future legend’s official grand prix career was underway. There would be unimagined glories to come. 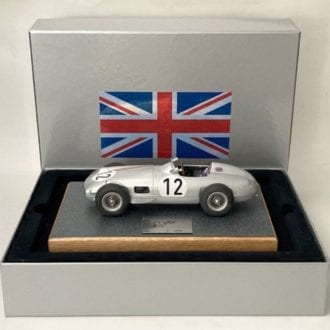