Crunch the numbers and the future looks bright for Alfa Romeo, Racing Point and Toro Rosso, but is time running out for Ferrari? 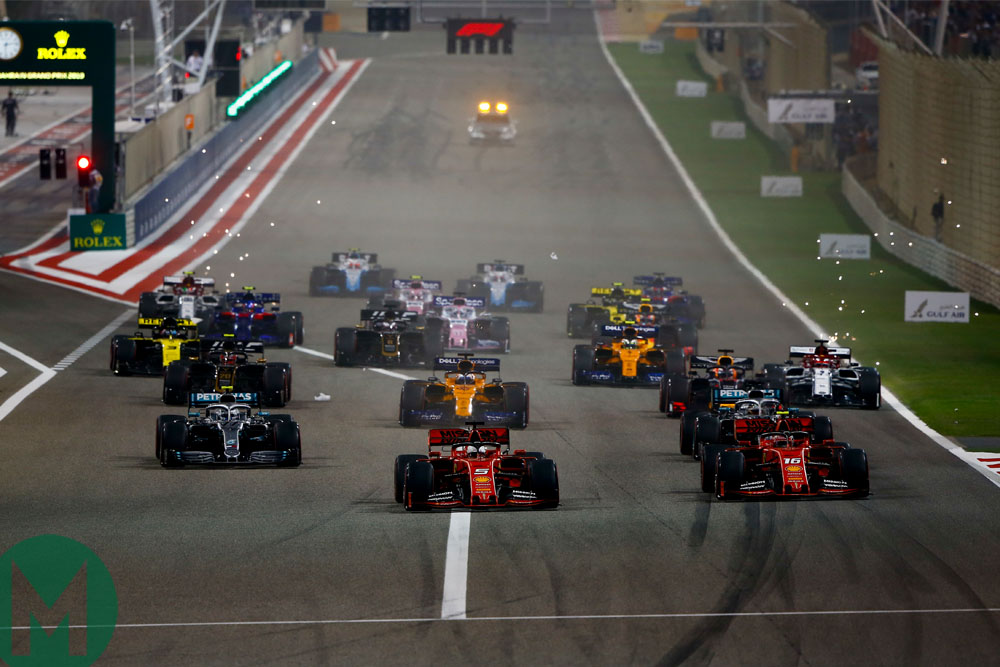 A graph can explain competitive reality far more readily than words, which can then be used just to provide the required perspective and context. So let’s take a look at some numbers from the season so far, with the emphasis on where each team is at, as opposed to the driver contests within.

First of all, here’s what a ‘supergrid’ taking the average of the first four races would look like if we average out the fastest team car in qualifying for each event. 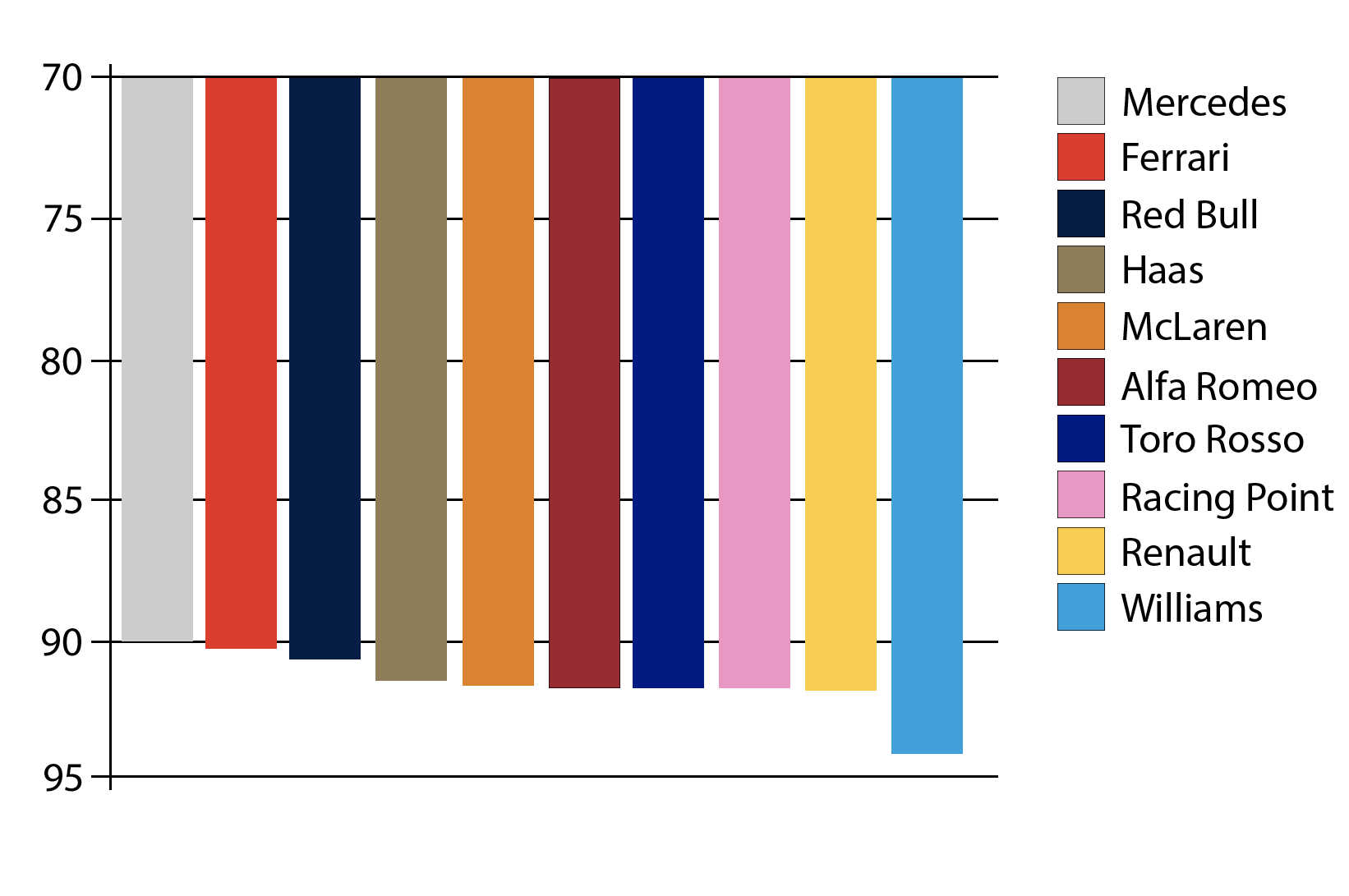 A supergrid of the first four races would have Mercedes on pole at 1min 30.182sec, with Ferrari on 1min 30.438sec from Red Bull at 1min 30.822sec etc. We can see clearly how the graph represents the proximity of the midfield – with 0.3sec between six teams. Renault currently has the second-slowest car as an average, but it was the fastest of ‘Class B’ just one race ago. It wouldn’t take much of a gain over the others to catapult up this particular league table.

Within those average figures, we can split the data up as shown in the graphs below: 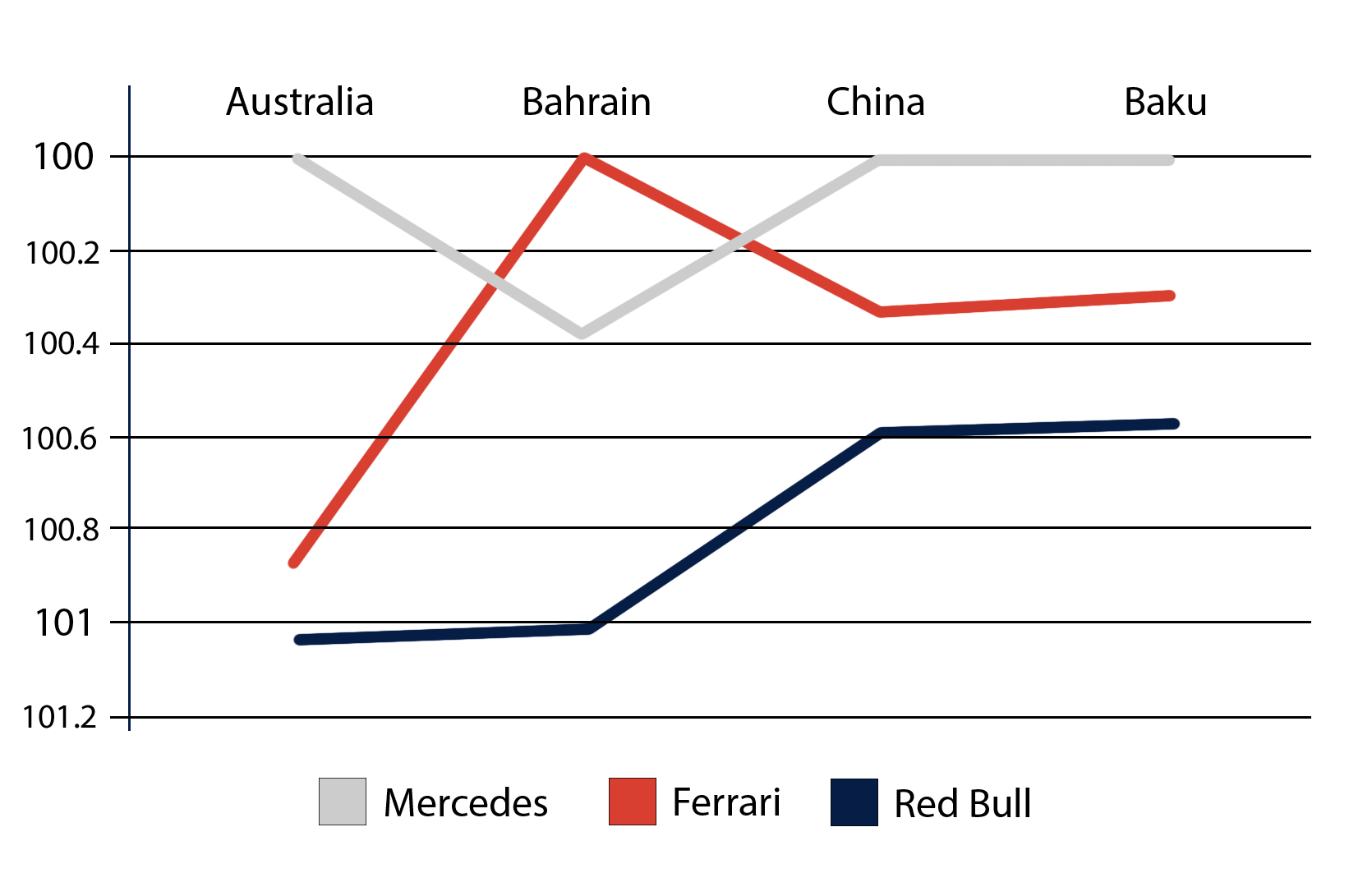 Among the big three teams, here we see a graphical representation of Ferrari’s under-performance in Melbourne (from an aero imbalance and enforced conservative engine modes) and Mercedes relative struggle in Bahrain (from its car being unsuited to the track layout). We see also the big step change in performance from Red Bull between Bahrain and China as they made improvements to the aero of the RB15 around the front wing and its underside. Bear in mind how that graph would’ve looked had Ferrari delivered on its potential in Baku. 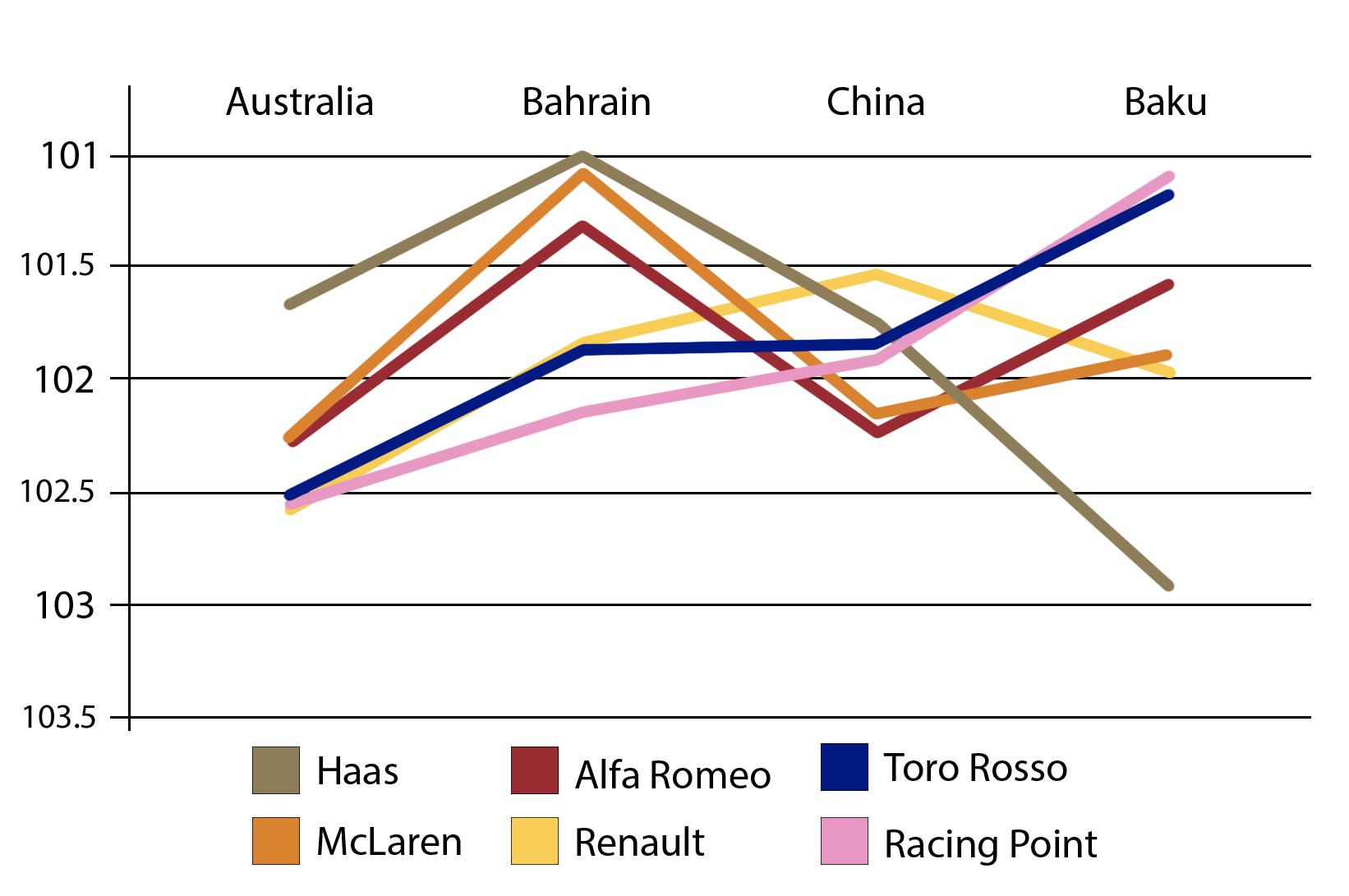 As previously discussed in this column, the overwhelmingly dominant performance stat is that the Bahrain pole set by Ferrari was an unusually soft target for the others to be measured against – every single team other than Mercedes and Red Bull was dramatically closer to pole in Bahrain than at any other track. Illustrating the point that Mercedes was a lot slower than usual there, for the reasons discussed a couple of weeks ago (a rear-limited car on a rear-limited track).

The third graph shows the dramatic fall from contention of Haas in Baku as it struggled even more than usual for tyre temperatures. What is also evident is the steady, continuous progress made by Racing Point, though that’s something that is probably flattered slightly by the most recent race being at a venue where the team (with whatever label) always shines.

But going into finer detail, graphs two and three confirm that at the rear limited-track of Bahrain, the front-limited cars – Ferrari, Alfa Romeo, McLaren – show better relative to those around them than they do elsewhere.

Qualifying percentage of Class B pole 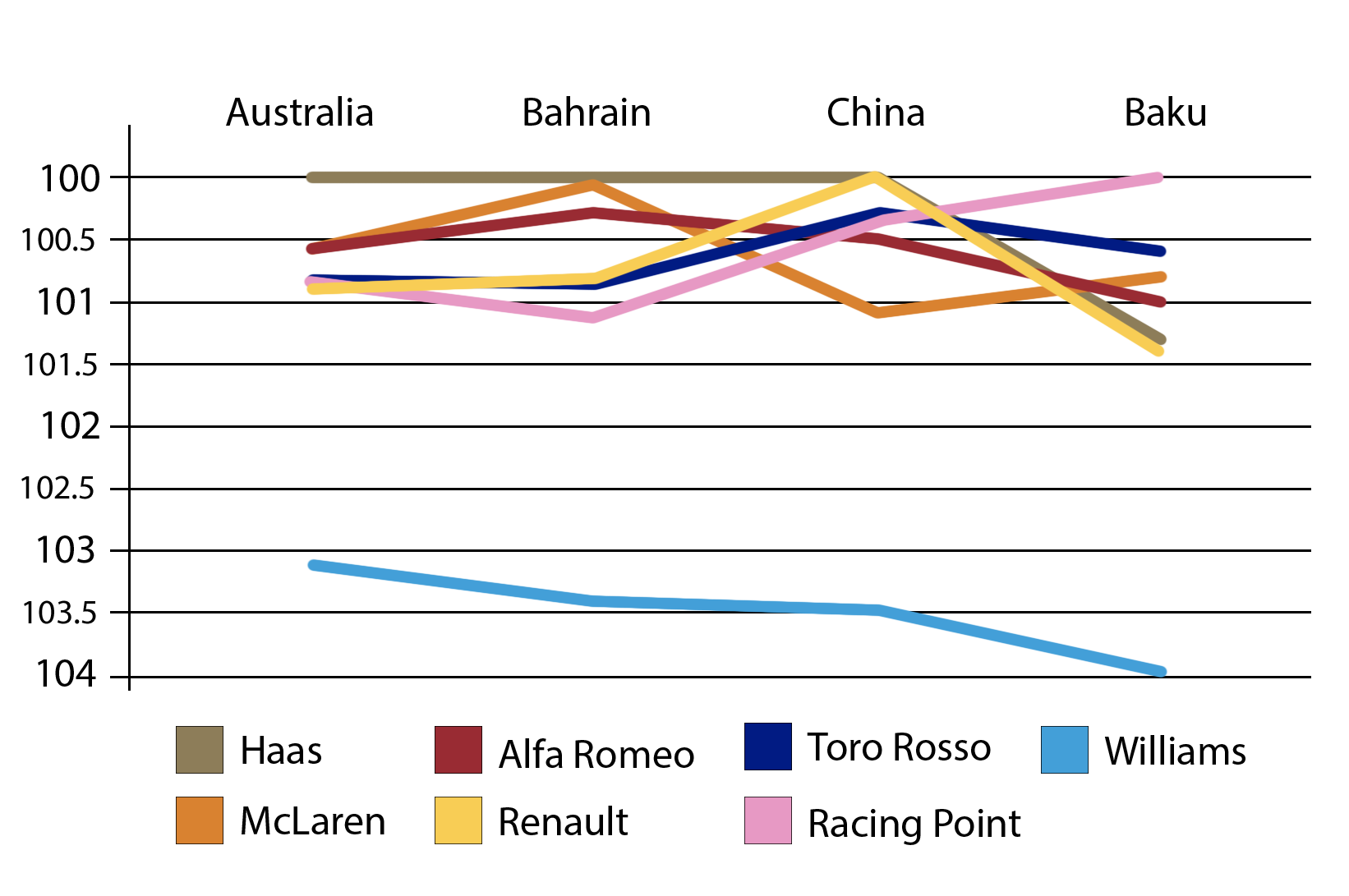 If we ignore the top three teams and look just at the rest of the field, re-assigning 100 per cent to ‘Class B pole’ and measuring the others relative to that, we see with greater clarity Renault’s inconsistent form and how Williams is falling ever-further away as everyone else develops while it remains fire-fighting a fundamentally flawed car.

All of which frames the prospects of the season ahead as we come to the European part of it. Ferrari is desperately trying to find the sweet spot of the car in the way it did during winter testing – at the very venue we visit next. If it cannot and, for example, the front wing philosophy proves too limited, it’s not great news for the championship. Since China’s aero upgrade of the Red Bull, most of the deficit probably now resides with Honda – and so its development potential, particularly with regard to its qualifying modes, is going to be crucial.

Renault stands in no-man’s-land and badly needs more performance from both aero and power unit if it’s to deliver on its pre-season aims of pulling clear of the midfield. Haas badly needs to understand its tyre conundrum on the new thin gauge tyres. There’s potential for more at Alfa Romeo, Racing Point and Toro Rosso. McLaren is batting away towards the front of the midfield but in a front-limited car.