Supersub Nico Hülkenberg gets his fourth covid stand-in this weekend, this time for Sebastian Vettel, having been deployed by the same team back in its Racing Point days of 2020 for the covid-struck Sergio Perez and Lance Stroll.

It’s not how his career was supposed to pan out. His progression through the junior ranks was truly stellar, giving an early CV every bit as impressive as, say, Charles Leclerc’s would subsequently be. A champion in every category contested (including as a rookie in GP2), some of his performances in A1 GP were truly spectacular. Especially if it rained, when his skills were truly mesmerising. He looked every inch a future world champion.

But it never quite happened for him in F1. While he was never anything other than highly accomplished, the superstar qualities just didn’t translate into the top category for some reason. There were only ever echoes of it – unless the track was wet, that is. In those circumstances he was invariably fantastically fast. In his rookie season with Williams, qualifying for race three at Sepang was on a wet track and he put the car way above its natural level, in fifth, 0.5sec faster than team mate Rubens Barrichello. 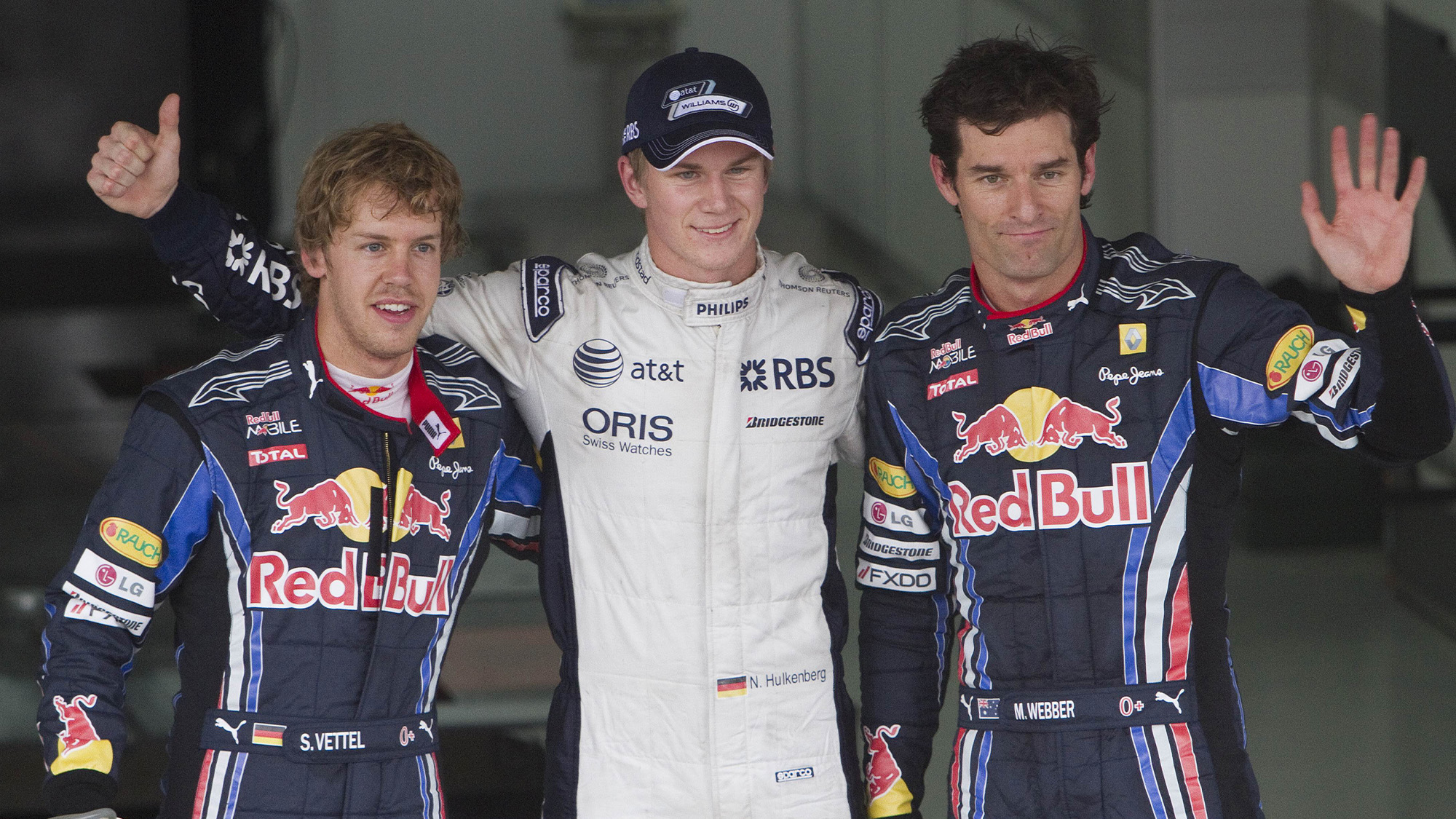 Brazil 2010, after one of the “all-time great” qualifying laps

Furthermore, that was just a prelude to his truly spectacular performance in qualifying for the penultimate event in Brazil. There, on a wet but drying track, he was extraordinary, qualifying the Williams on pole 1.1sec faster than best of the rest. Either one of his two Q3 laps would have secured him the slot and he lined up ahead of the two Red Bulls, Lewis Hamilton’s McLaren and Fernando Alonso’s Ferrari. In the dry of race day, it was only natural that the car should sink back down to its natural level and it did – but that qualifying lap was one of the all-time great ones.

It suggested that after a rookie season in which he’d generally been out-performed by Barrichello that we just might be seeing his true potential finally emerge in the top category. Unfortunately the momentum of that end-of-season accomplishment was lost as he was obliged to take a third driver role at Force India the following year, as his Williams seat was taken over by the heavily-financed Pastor Maldonado. 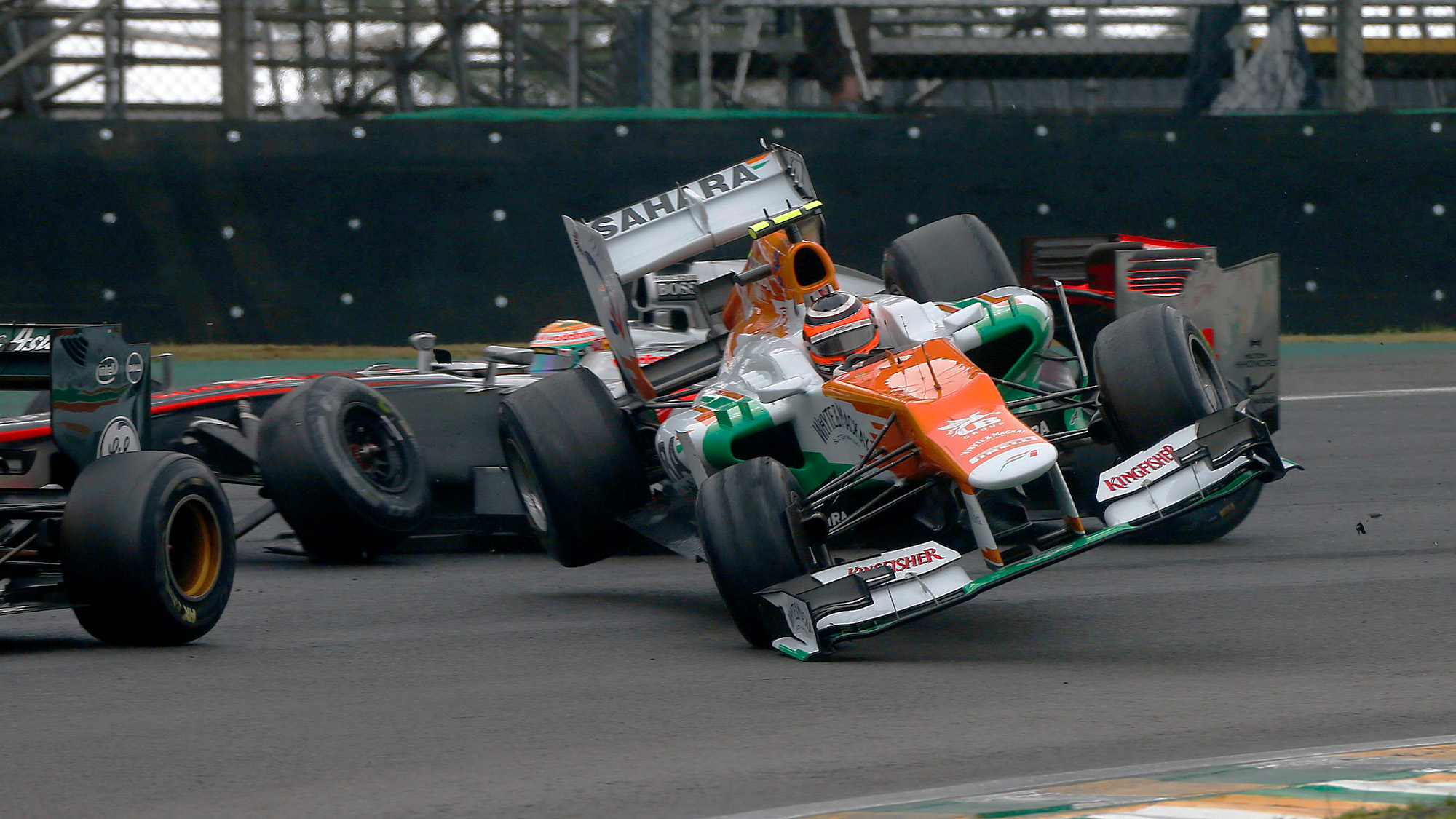 Hamilton clash ended Hülkenberg’s hopes of victory back in Brazil, 2012

That rookie season was pretty much the template for his entire F1 career: flashes of the brilliant performer he’d looked in his junior career, invariably incredible in the rain, but generally just a good, solid performer. In four seasons at Force India he was usually a smidge faster than Sergio Perez but not as good at hauling in the points, never as sympathetic to the needs of the tricky Pirelli tyres. He might have won the Brazilian Grand Prix but for an unluckily-timed safety car and a clash with Lewis Hamilton. But otherwise, he didn’t mark himself out. A move to Renault was a gamble that might have paid off if that team had made the transition to a serious force. There, he blitzed the sophomore Jolyon Palmer and handily beat Carlos Sainz, but was then comfortably eclipsed by Daniel Ricciardo. Which marked the end of his full-time career.

He’s a perfect case study in how a driver can have a skill which, if the car allows him to utilise it, can be extraordinary. But if it doesn’t, it puts a false ceiling on his performance. Had every grand prix been run in the rain Hülkenberg would probably have been a multiple world champion. Maybe he would have flourished in the tyre war years when the rubber could be pushed flat out in between multiple fuel stops, the style of racing which Michael Schumacher so completely dominated. He’s a very classy journeyman and he will invariably be a great stand-in for Vettel this weekend. But unless it rains in the desert, there are not going to be any further miracles.