In spite of not hosting a grand prix for almost 25 years, Portugal’s most recent and most successful Formula 1 driver Tiago Monteiro says the series’ return to the country has been a long time coming, and will be one of the more challenging circuits on the altered 2020 calendar.

Formula 1 will race at Portimao for the first time in world championship history, with the Algarve circuit hosting the first Portuguese Grand Prix since 1996.

Back then, Estoril played host but teams will be getting to grips with a brand new circuit that Monteiro believes will be one of the biggest challenges on the calendar for teams and drivers to get on top of.

He is one driver who has a great knowledge of the circuit beyond local knowledge, going as far back as being involved with the project during the construction of the circuit, and winning there in the World Touring Car Championship in 2010.

“I know the track very well. I was there actually the day it opened, I was there actually during the construction, I’ve been there to promote it. I drove with a Honda motorcycle actually just before it was open,” the former Jordan F1 driver said, speaking in his role as a Honda WTCR driver.

“So I’ve been through the whole process, tested there many times. I won there with a Honda WTCC car in 2010 – last time we raced there. We’ve been testing there. I had a podium in the LMP1 car there. So I know the track quite well, I like it, and I rate it very highly.”

F1’s first visit comes in a season with several circuits making the altered calendar that haven’t hosted a race in recent years. Mugello and the Nürburgring have featured; a return to Turkey and use of the Bahrain outer loop awaits.

The Portuguese race will be another new venue that will make for a thrilling spectacle according to Monteiro.

“I think a Formula One car on that track will be amazing to watch.

“We have very high-speed corners, blind corners, really big hills, downhills. It will be a big challenge to drivers physically. They went to Mugello recently and struggled big time. The tyres really struggled as well. So all these new tracks bring new challenge to the teams’ engineering.

“The engineers don’t know the track either. So it will be quite nice to see how well they cope with it and how well they adapt to it. But I’m sure they will be good images.”

The Portimao circuit features undulation from start to finish, with a long run into Turn One preceded by a late drop downhill into the first turn. The rise up the hill for Turn Four will put demand on driver and car stability, while the blind entry to Turn 11 is sure to catch one or two out before the weekend is done.

Monteiro explains that the unique nature of the circuit will demand the very best from drivers, and explained how to tackle some of the key zones on the circuit.

“There are a few very specific points at the Portimao race track that make it very interesting. And you do have overtaking zones, like corner one – after a very long straight line I think the cars will arrive there very fast. You have a kind of a drop and very hard braking, which I think you could overtake.

Monteiro became Portugal’s most successful F1 driver of all-time when he scored a surprise podium at the 2005 United States Grand Prix following the Michelin tyre meltdown that weekend. Following the withdrawal of all Michelin-shod teams, the Portuguese driver scored a third-place finish. 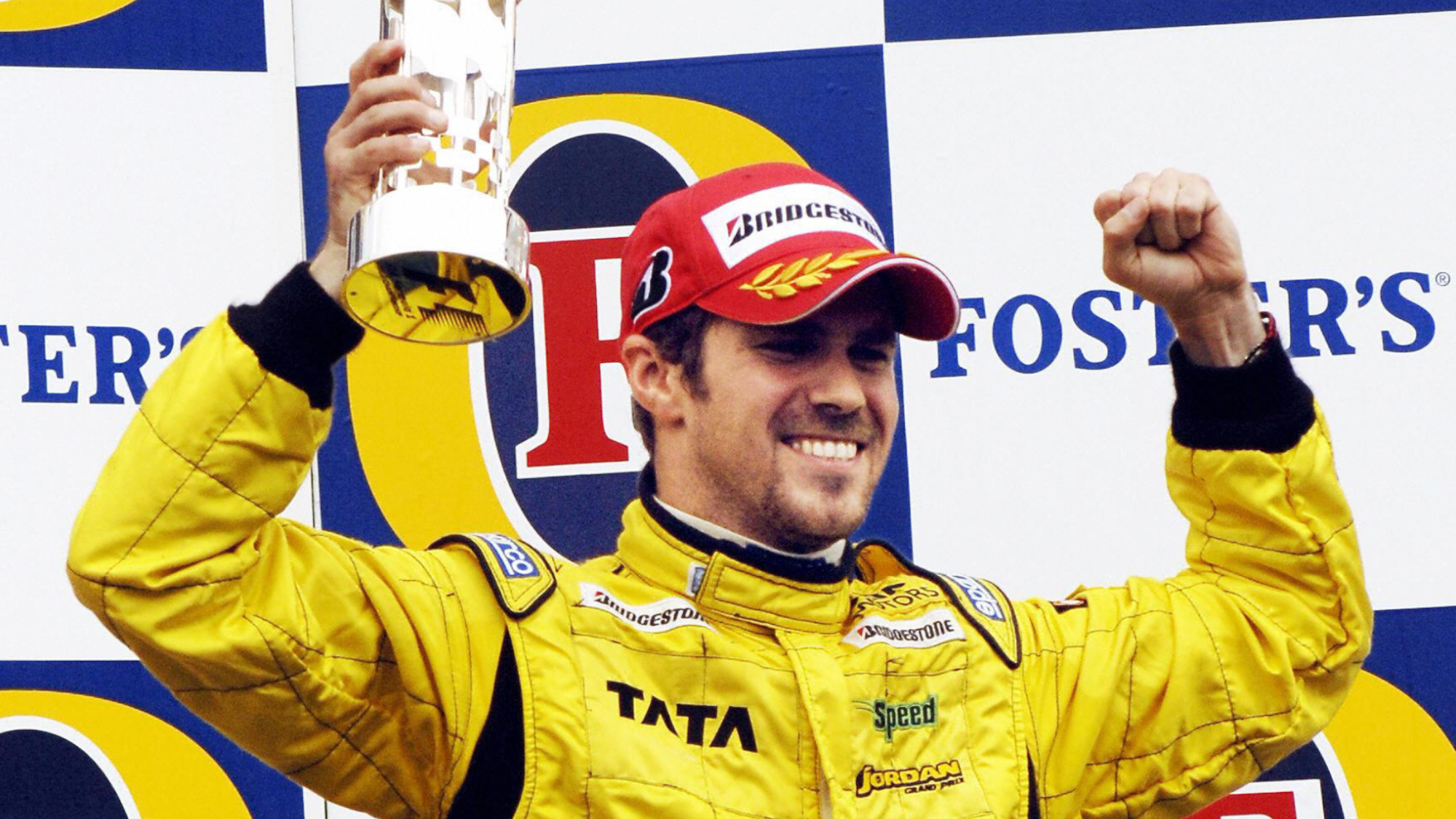 Monteiro celebrates his P3 finish at the 2005 US GP

Since then, rumours have been on and off throughout the years about a return to Portugal for a grand prix, with Formula 1 testing at Portimao ahead of the 2009 season.

Despite the circuit holding necessary facilities and a suitable layout to stage a race, it was only when the global pandemic threw the 2020 calendar into chaos that the prospect of a race began to materialise.

“It’s another fantastic opportunity for Portugal,” Monteiro said. “I’m really glad to have a huge support from the fans around Portugal. They’re very passionate about motorsport and they had of course in the nineties… the last Grand Prix in Estoril, and since then Formula One only tested, I think, in Portugal since then.

Tiago Monteiro: the only man who cheered at the 2005 US Grand Prix

F1's 2005 US Grand Prix fiasco dented the series' image, angered teams, and left Ferrari's drivers looking sheepish. But there was one man leaping for joy: Tiago Monteiro tells his story.

“So they had a Portuguese driver, obviously. And we did try to motivate the whole circus to come to Portugal at the time when I was there, and it never happened. There’s a lot of people who are missing that.

“This year the opportunity came around to have it back in Portugal – at the new track, which is the Algarve Portimao race track. It’s not new itself, it’s maybe about twelve years, but it’s a new challenge for Formula One.

“The track is going to be very big challenge for the drivers and the teams. It’s like a small Spa I would say, with ups and downs, blind corners, very tricky, very challenging, very demanding. I think it will be a very good experience for the TV as well.”