If the race at Paul Ricard was good then there should be back-to-back classics at the Red Bull Ring.

Scene of F1’s return a year ago following the delayed start to the season, Austria put on a show in both races and it seems like it could do so once again, with rain in the air this weekend.

Lewis Hamilton took an incredible pole position in torrential conditions at the Styrian event last season and will be looking to replicate his lap should the weather arrive once again.

Title rival Max Verstappen will be riding high from his third victory of the season around a Mercedes stomping ground but Red Bull could have its work cut out if it’s to make it four race wins in a row.

Ferrari has to bounce back from its worst weekend of the season following a point-less French Grand Prix, while rivals McLaren will hope the Scuderia’s tyre woes carry over to the Red Bull Ring.

Here is what you need to keep an eye on this weekend during the Styrian Grand Prix.

A quick look at the weather forecast sets expectations high for the weekend. Rain is currently expected from Friday to Sunday with thunderstorms in the area on race day.

There is a 70% chance in the afternoon ahead of lights out, and the grey clouds gathering will be a tantalising prospect with two of F1’s best wet weather drivers battling it out head-to-head.

Verstappen mastered conditions at Imola to win a wet-to-dry race while Hamilton slid off the road lapping George Russell.

Up until that point though, the Mercedes man had been catching the race leader at a dramatic rate in the changeable conditions. Could this weekend be in Mercedes’ favour?

Hamilton has previous form in the wet at the Red Bull Ring too. Last season, he claimed pole position in appalling weather by 1.2sec over Verstappen.

Is this the opportunity he needs to gain some momentum back in the title race?

There has been very little to celebrate down at Haas this season as the American team’s hopes have fully transferred over to the 2022 regulations.

It has left both Mick Schumacher and Nikita Mazepin with a car that is well off the pace and with little prospect of fighting for any points, not that you’d know it by how the two have driven so far this season.

During the Azerbaijan sprint finale, Mazepin half-heartedly threw a late block against his team-mate as the duo breached 200mph on the final straight. Team boss Guenther Steiner said that both had been spoken to about their wheel-to-wheel etiquette though Mazepin didn’t sound so apologetic pre-race in France.

So roll on another race weekend and the pair were at it again, this time Mazepin forcing his team-mate off the circuit with a move that was well within the rules but a little rude against the driver in the same coloured car.

Schumacher was less than impressed in post-race interviews while team boss Steiner has said he saw nothing wrong with what happened. It looks like a fight that is bound to end in tears sooner rather than later.

Flexi-gate continues but this time the shoe is on the other foot as Red Bull are posing questions to the FIA over the legality of Mercedes’ front wing.

Such are the fine margins in this year’s title race, the competitive fight is happening off the track just as much as on it. Following claims Red Bull’s wing was flexing excessively and the tightening up of the rear-wing deflection tests, the hunter has become the hunted with the focus now on the front wings of the black and silver cars.

Red Bull claims the wings of the Mercedes flexes to the point in which it contravenes the rules. Though there has been no official protest filed so far, Red Bull team principal Christian Horner has made it known he’ll be going after Toto Wolff’s Mercedes team.

Horner said to expect countermeasures should the rear wing investigation continue and the two have been paired up in the pre-race press conferences.

It could be handbags before the lights even go out in Austria.

W Series is back

It has been quite some time since Jamie Chadwick claimed the inaugural W Series championship title back in 2019 but the all-women’s racing series is back this weekend. 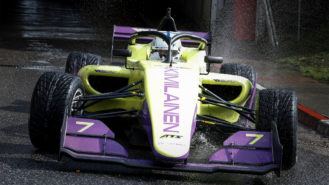 The series will support Formula 1 at eight races during the 2021 season starting in Austria for its first race since Alice Powell’s August victory at Brands Hatch.

Chadwick returns to the grid to defend her crown in a one-off following her championship win two seasons ago, while there are new faces on the grid ready to get their first taste of wheel-to-wheel racing in the Tatuus T-318.

With the weather set to be changeable at best, it could be well worth tuning in a little bit early and watching the action unfold.

“When I was in the planning stages of W Series, if someone had told me in your second year you would be having all your races with F1 I would have laughed. It’s an enormous endorsement of the team.” Series boss Catherine Bond-Muir told Motor Sport.

If Paul Ricard represented something of a Mercedes track then might the Red Bull Ring favour the eponymous team? It might not be that straightforward.

Though Red Bull had the measure of Mercedes on Saturday most recently, the lap time was achieved with a set-up philosophy that leaned towards running less downforce than its direct rival.

While that means Red Bull gains with a superior straight-line speed, that advantage is limited in the mid-to-high speed corners. That is where Mercedes could potentially come into its own.

Should Hamilton and Valtteri Bottas find the set-up balance between a sail-like rear wing used in Paul Ricard and the trimmed-out version that won in Barcelona last month, Red Bull’s skinny solution won’t be as powerful as it was in France.

Two long straights will reward the lower downforce route but the fast sweeps of sector two should favour the Mercedes higher drag set-up, even if Red Bull opts to run its spoon wing as it did last weekend.

With the wet weather that’s forecast it could all be out the window. The low-drag penalty is set to be irrelevant should teams have to set up for heavy rain and the home team might just be favourite after all with its ability to fire up the tyres quicker than Mercedes.