As I hope you will see from my final Motor Sport column (out on December 31st), Martin Brundle was in excellent form when we met for lunch 10 days after Abu Dhabi, the final Grand Prix of the season.

In the magazine piece, we talked through driver performances in 2016, inevitably focusing on World Champion (retired) Nico Rosberg and Lewis Hamilton, but much else was discussed and London was dark by the time we left. 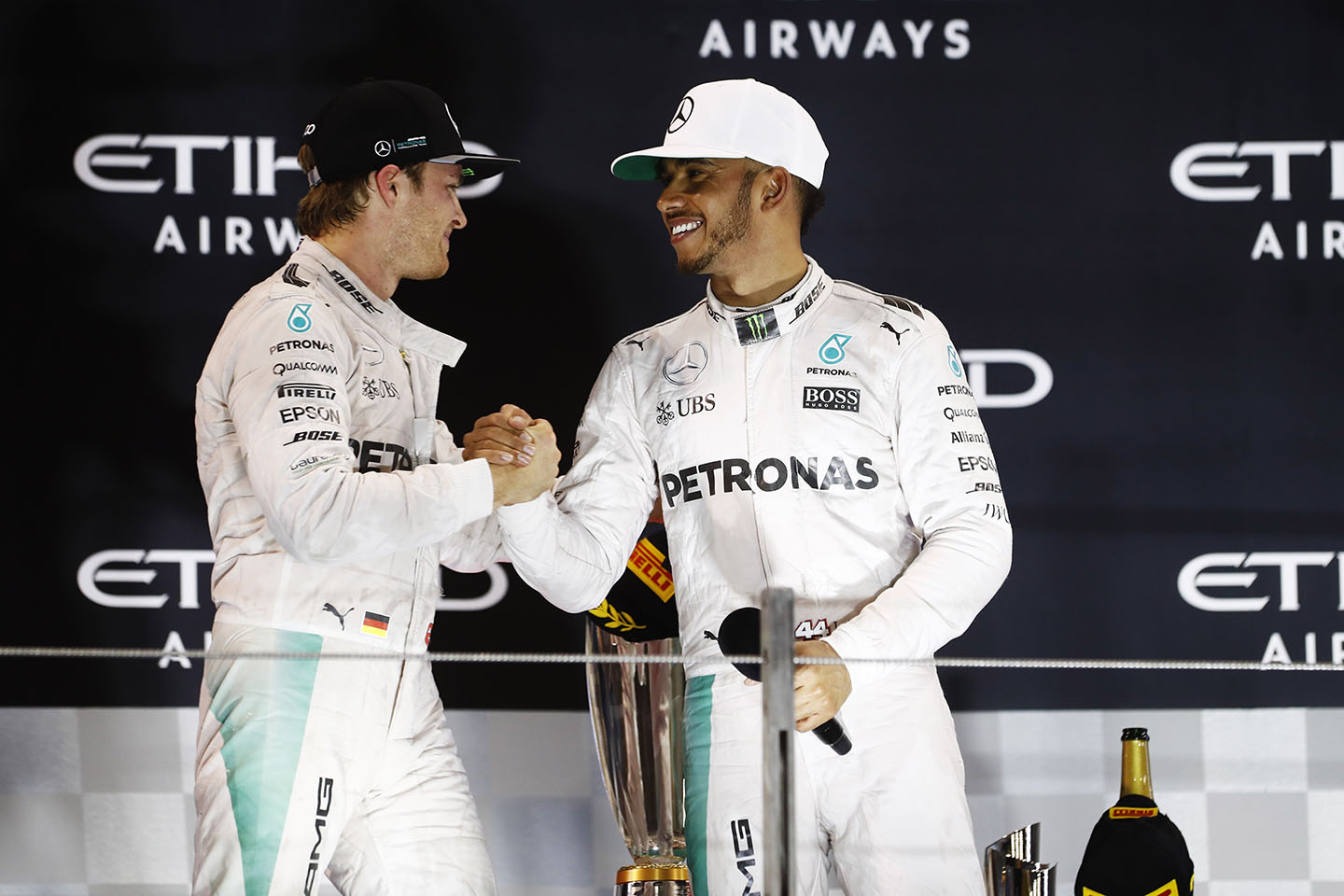 What will be different next season? For a start, apart from Rosberg, missing from the grid will be Jenson Button and – unless, as rumoured, he ends up keeping the Williams drive he never wanted to lose in the first place – Felipe Massa, and missing from the paddock, of course, will be Ron Dennis.

Brundle drove for McLaren in ‘the Peugeot season’ of 1994 (the highlight of his year a superb second to Michael Schumacher at Monaco), so he and Dennis go way back, and Martin allows that, as with so many McLaren drivers, his relationship with Ron was – and is – equivocal. 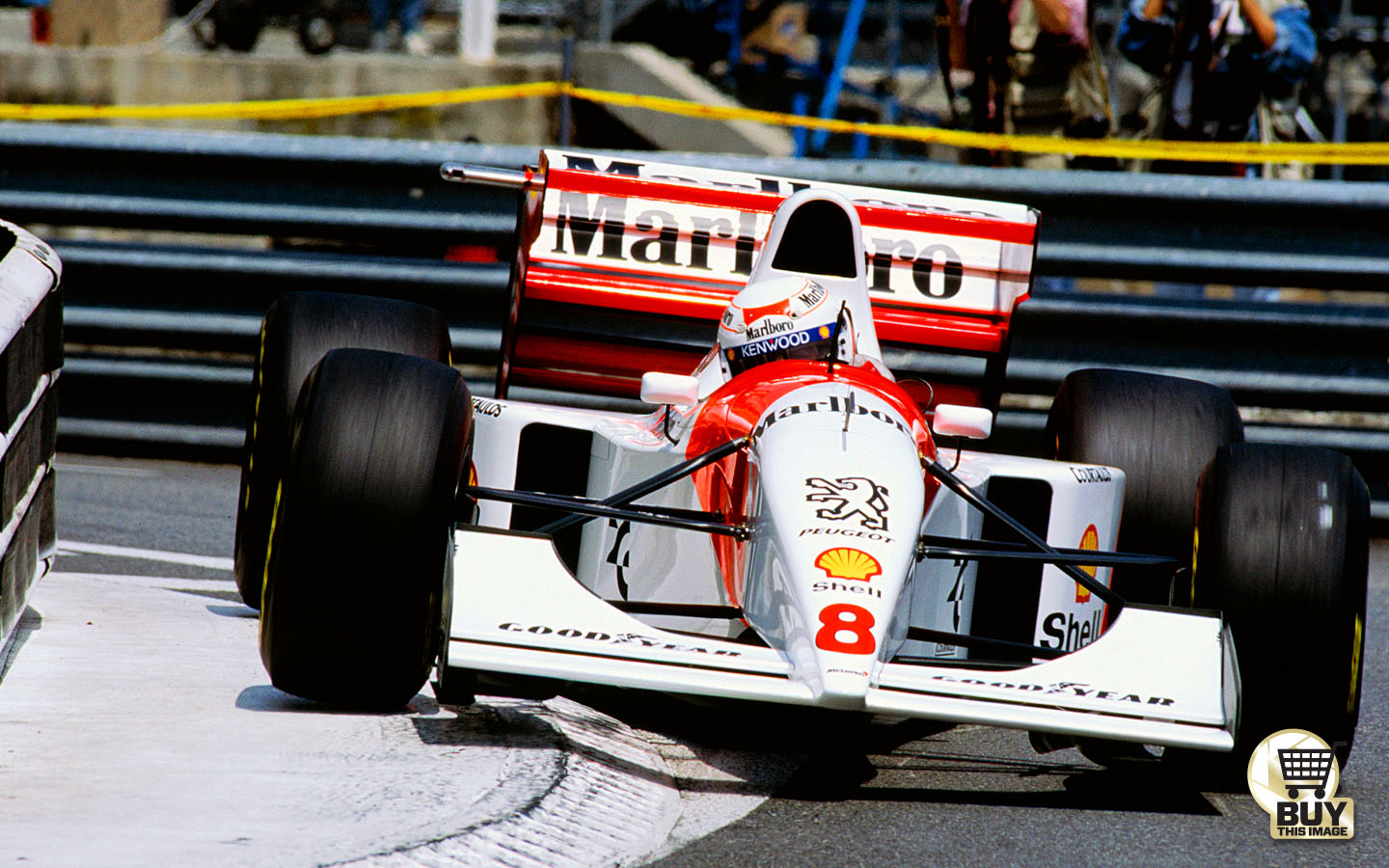 “Ron’s a tragic case, isn’t he? He needs help – and I don’t say that lightly. There he was in the autumn, taking his own organisation to court… the whole thing is so sad.

“For many reasons I admire Ron – he’s amazingly good at some things – but I hate the delusional aspect of where he ended up: frankly, he was running the McLaren team into the rocks. When was the last constructors’ championship, the last drivers’ championship, the last win – the last podium? Where’s the major sponsor? You wanted to take Ron to one side, and say, ‘What the hell are you doing? Where is this going?’

“When I was at McLaren in ’94, the economic times were very different – for one thing, we still had tobacco advertising, and the team’s major sponsor was Marlboro – but there were loads of other sponsors on the car plus, as far as I remember, 14 more that couldn’t be accommodated on it, as well as further ‘McLaren sponsors’ on other cars, like Tyrrells and Jordans, because they conflicted with others already on the McLaren.

“Difficult to believe now, isn’t it? Over time Ron fell out with so many sponsors – even a couple of years ago a five-year deal was agreed with Diageo, but it fell through at the last minute. That was reputedly worth $40m a year – imagine if McLaren had that money now…”

As I wrote in a recent newsletter, for more than 30 years Dennis has been a colossus of our sport, but those who worked with him invariably suggest that his major failing was his autocracy: there was his way and the wrong way, and he passed up many an excellent opportunity to keep quiet. As one former senior colleague puts it, “Ron has a genius for falling out with people…”

Most significantly, he fell out with Mercedes-Benz, and when that happened McLaren lost not only its Formula 1 engine partner of 20 years, but also a huge investor in the entire company.

“I was chatting to Alex Wurz the other day,” said Brundle, “and he pointed out that McLaren could be the performance arm of Mercedes – and also still the ‘works Mercedes’ team in Formula 1, with a car designed by Adrian Newey, and driven by Lewis Hamilton. Somehow, though, Ron managed to alienate the whole lot of them. 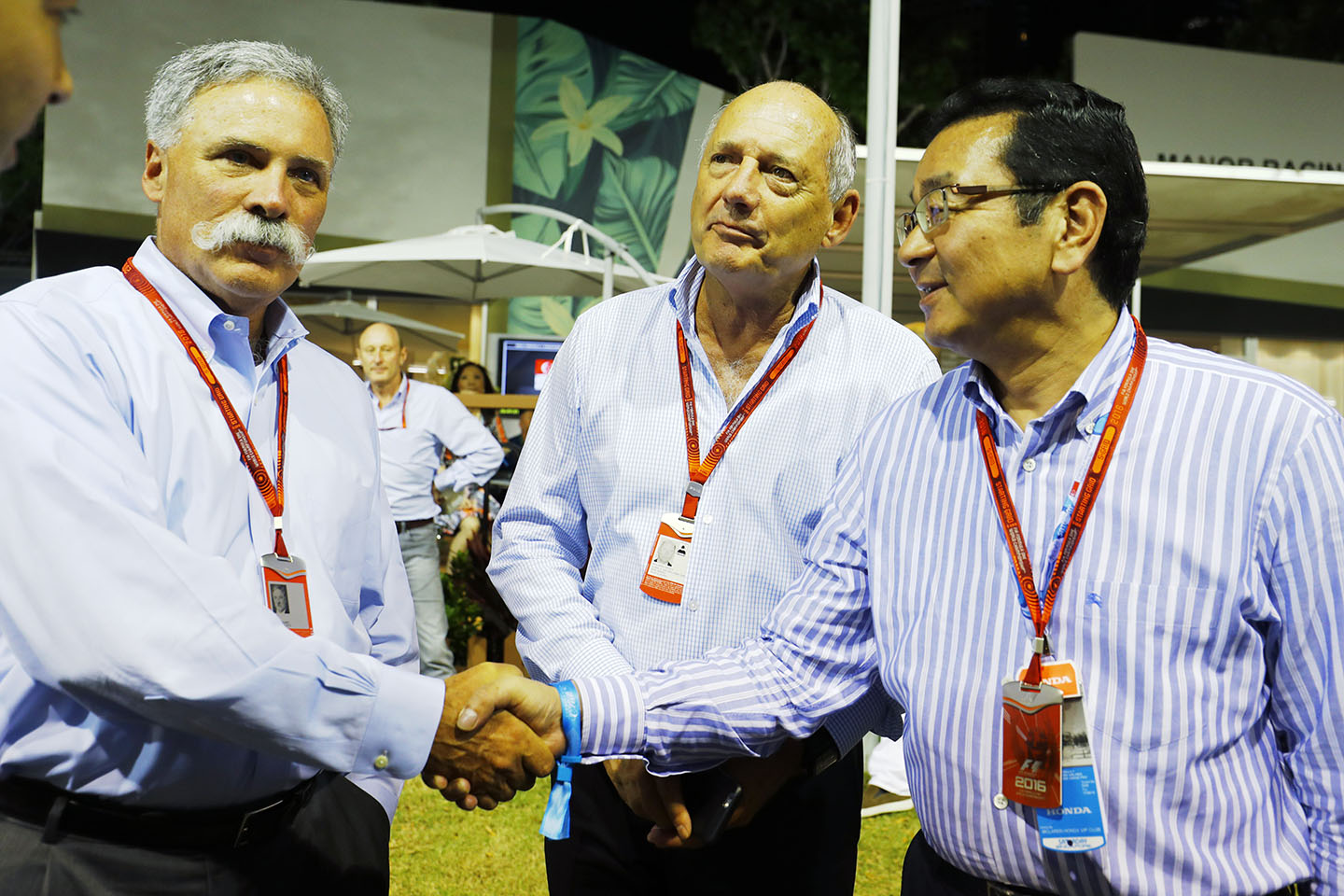 “I said to him, ‘How did you manage to fall out with so many people?’ And his response? ‘D’you know what I’ve achieved? The road cars, the technology company…’ I said, ‘Yes, I know all that, but you’re not answering my question: you fell out not only with Mercedes, but also with two huge McLaren investors, Mansour (Ojjeh) and the Crown Prince of Bahrain…’

“That’s why he’s in this position now – you reap what you sew, don’t you? As I said, I think what’s happened is tragic – but not a great surprise. Ron’s still a major shareholder in McLaren, but Zak Brown is taking over now, and I think the first thing he should do is adopt an ‘open door’ policy, like Christian Horner and Adrian Newey do at Red Bull – I think that’s essential.”

So what else is going to be different in 2017? The power unit rules stay the same, save that – mercifully – the token system disappears, giving manufacturers free rein in improving their engines. The cars, though, will be fundamentally different – and significantly faster, thanks to way more downforce, and much bigger tyres.

For some time there has been a wish, among the powers-that-be, for quicker cars, the aim to take Formula 1 back to where it was a decade ago. It’s quite a task, though, given that today’s hybrid engine cars are 100kg heavier than in the V10 era, so greatly increasing downforce may be the only way to achieve it – but is it desirable?

I hope I’m proved wrong, but I somewhat doubt it, because dirty air will become dirtier still, and overtaking – even with DRS – surely more difficult. As well as that, with more aero and wider tyres, straightline speeds will inevitably come down.

For some time now it has been suggested by such as Niki Lauda that today’s cars are too easy to drive, that there’s something amiss when drivers are barely sweating as they ascend to the podium. Increasing downforce – and therefore cornering speeds – will certainly increase the physical aspect of driving a Formula 1 car, but if it appears even more bolted to the track, will the spectacle be any more satisfying for those paying to watch?

Brundle, too, has his doubts. “What I’m hoping is that next year’s cars are much more brutal. As Niki says, Formula 1 has lost its gladiatorial aspect, and this has to be sorted out. People want to see something that scares them, that makes them think they’re watching something unbelievable – and here we are, sanitising the sport. Do I want to see people killed? No, of course I don’t. Do I want to see people challenging the edge of safety? Yes, I do.

“The way it’s been recently, people watch F1 and they see the huge asphalt run-offs and everything, and they begin to believe they could do it themselves. They couldn’t – but perception’s everything, and when people think ‘I could do that’… at that point Formula 1 is buried, isn’t it?

“The last time we had cars that looked difficult to drive was early in 2014, when the hybrid cars were new, and downforce had been cut – and they hadn’t yet sorted out the brake-by-wire and the ‘torque demand’, as it’s now called. They looked a right handful then, and I think it’s vital that the fans look at Formula 1 cars, and say, ‘That is amazing – I couldn’t and/or wouldn’t do that…’

“A question I ask all over the world is, ‘How much slower than a top F1 driver is Valentino Rossi around Silverstone or Barcelona?’ People say, ‘Three seconds? Five seconds? Ten? And you say no, half a minute! People can’t believe it, but it’s true. 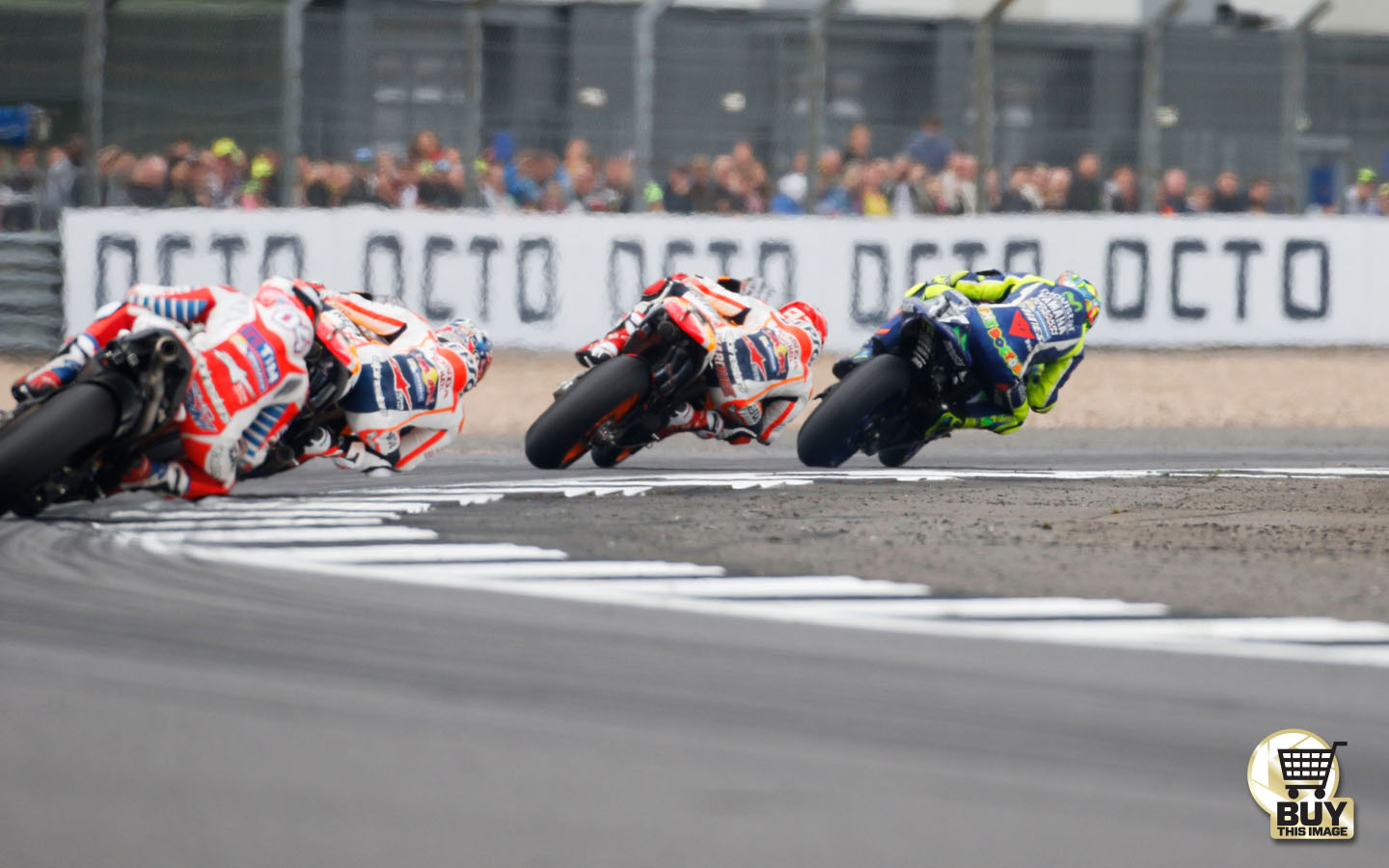 “So, going on from that, does MotoGP look more – or less – scary than Formula 1? More scary, without a doubt, so speed per se is not the issue. The thing is, people love to see cars sliding – they always look faster than cars bolted to the track – and that comes back to MotoGP, doesn’t it? Half a minute a lap slower than F1 – but they look bloody amazing. Speed is not the issue…”

I agreed. When the cars are apparently on rails, there is a temptation to think, ‘If I were strong enough to hold on, and my neck muscles could stand it, I could do that…’ But if – when aero was in its infancy – you watched Jochen Rindt or Ronnie Peterson through the old Woodcote, teetering on the edge of adhesion, you never had thoughts like that. Quite the opposite in fact. 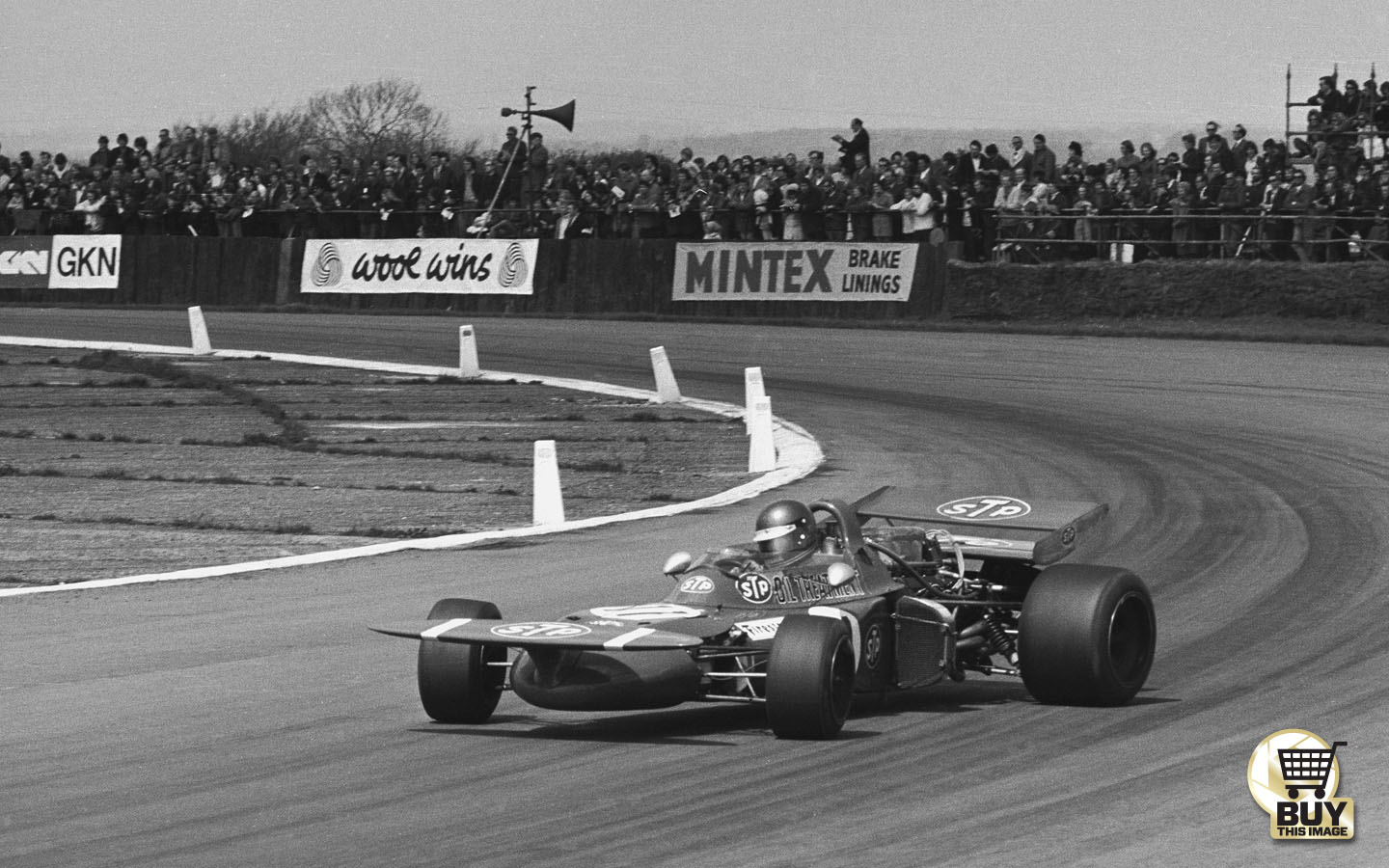 Peterson sliding at Silverstone in 1971

“Bloody right!” said Martin. “I started going to races with my uncle when I was a young kid, and I witnessed that myself at Woodcote. I watched all those races. What a fantastic corner that was, particularly with no downforce worth the name…

“I think, at the top level, the skills are still the same now – but because the cars are so much better, they’re just more refined. Through almost all of my career it was a matter of keeping the bloody car from crashing – and I mean that…”

“Yes, it is, and they do crash – a lot. In Formula 1 the skill has transferred now to braking to within two or three metres at 200mph, so the precision with which they drive is hugely impressive – it’s just not as enjoyable to watch. I’m keeping my fingers crossed for 2017, but I think what Lewis said is probably right – more downforce is the very last thing we need.”

One thing – Saints Be Praised – we will not have next year is halos, but as things stand their introduction looks a certainty for 2018. Brundle is firmly against them.

“My feeling is that they could create more problems than they fix; I think they look wrong – and if something looks wrong, in my book it is wrong. My feelings on things like this are, ‘If you don’t want to drive it, if you’re not happy with the risks, get out of it’.

“My son races, and if he were in F1 I’d be comfortable with it – I think you’re probably more at risk flying to a race, and jumping in a rental car, than you are in the F1 car. I don’t say that flippantly: I think the risks in F1 are very well managed, and wholly acceptable. As I say, if you don’t want to do it, don’t do it…”