Taken from the September 1997 issue of Motor Sport

On July 17 1937, during practice for the German Grand Prix, Bernd Rosemeyer fought his wayward Auto Union around the Nürburgring in 9m 46.2s, a time that staggered the pitlane. By way of comparison, Rudolf Caracciola’s Mercedes, second fastest at that point, had lapped in 10m 5s. 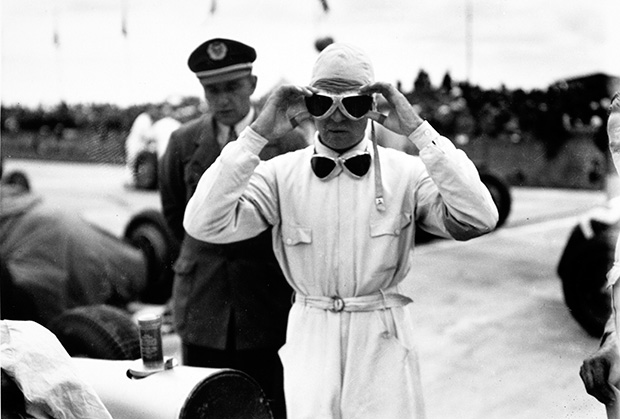 Caracciola in the Nürburgring pits before the 1937 German Grand Prix

Afterwards Rosemeyer teasingly suggested to Alfred Neubauer that his time was beyond reach. In fact, he said, he was prepared to pay 2000 marks to anyone who lapped under 9m 50s. Neubauer, the Mercedes team manager of legend, decided to play psychological games, accepted the wager, and sent out Hermann Lang.

As they watched from the pits, Neubauer clicked his watch at 9m 49s – shortly before his driver crossed the line. Rosemeyer, stunned, checked with the timekeepers, found that Lang’s real time had been 9m 52.2s, then ran back to remonstrate with a chuckling Neubauer. The bet had been lost, but ‘Don Alfredo’ considered it money well spent. “I knew,” he recounted in his memoirs, “how important it can be to get your opponent rattled…”

Had his life gone a different way, Neubauer might well have been working with Rosemeyer that day, for five years earlier he had been offered the job of Auto Union team manager. With Mercedes out of racing, and bored to distraction with sitting at a desk, he was inclined to accept until the MD of the time, Dr Kissel, assured him that Mercedes would race again when finances permitted. Thus, Neubauer, a Mercedes man to his bones, remained with the company for the balance of his professional life.

He was, as Stirling Moss has said, a man lost without racing, bluff yet sentimental, a bully when he needed to be, but always one devoted to his drivers – indeed, to all racing drivers, and none more so than Rosemeyer, who almost single-handedly thwarted Mercedes during the three seasons that were his flashingly brilliant career. 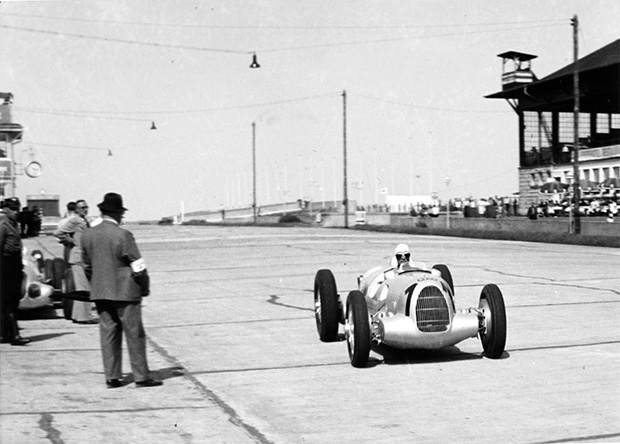 In 1937, indeed, Rosemeyer presented him with one of his white linen helmets, and some 34 years later, on the occasion of his 80th birthday, Neubauer was to receive from Ferry Porsche the stopwatch used by his father to time the Auto Union star at the Nürburgring that day. Mounted upon an engraved black marble base, the hands stopped in perpetuity on 9m46.2s, it was due to be Lot 177 in a recent Christie’s auction, featuring Neubauer’s personal archive.

As the auction was held the day after the British Grand Prix, I cursed that I was too busy to go into town, but at lunchtime my ‘phone rang. “Lot of disappointed people here,” said Eoin Young. “All the Neubauer stuff’s been withdrawn. Something about a dispute over title. It’s been removed already. That makes you privileged,” he went on. “You’ve seen it…”

So I had. The previous Wednesday, suspecting that I probably wouldn’t make the auction proper, I had gone to view the trophies, diaries and so on. “We should savour this,” a friend murmured as we arrived. “Who knows, it might never be seen in public again.”

From studying the catalogue beforehand, I was only too aware of what was on offer here. Neubauer was clearly a hoarder of some consequence, keeping such as armbands and posters and programmes, as well countless photographs, many in dedicated albums, many signed by the great drivers of the day. The volume of the collection was breathtaking in itself. 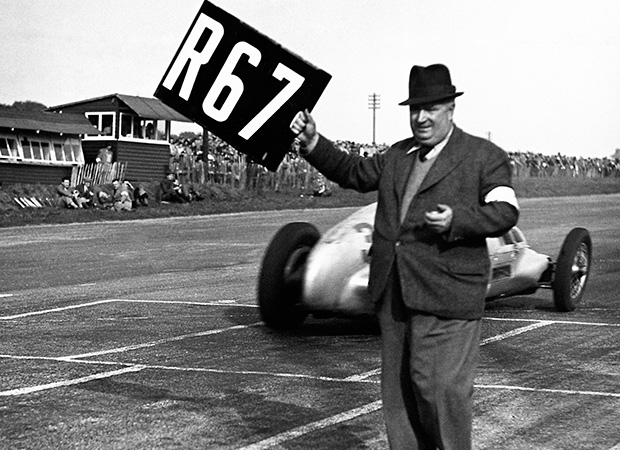 Merely being in the presence of such a slice of motor racing history was a faintly surreal experience. On a sunny morning, I walked into the Jack Barclay Showroom in Nine Elms, made my way between the Rolls Royces and Bentleys and there it all was. To the left, in a glass cabinet, Rosemeyer’s linen helmet, to the right bronze models of the Mercedes W125 and W196, a silver cigarette case from von Brauchitsch, a crystal glass cocktail shaker from Lang…

Through all his long years in the sport, though, undoubtedly Neubauer’s favourite driver, and the man he considered the best ever, was Caracciola. Never completely fit after suffering terrible leg injuries at Monaco in 1933, Rudi’s innate genius remained, and in the wet, particularly, none could touch him.

If his skills were intact, however, the years inevitably pared something from the edge of Caracciola’s commitment, and by the late 1930s he was invariably outpaced by Lang, the mechanic who became one of the very greatest drivers, and whose best years were lost to the war. Neubauer, Caracciola’s firm friend, well knew what was happening, but was aware, too, of Rudi’s enormous contribution to Mercedes’ success down the years, and never threatened his dignity.

Lang, right to the end of his days, maintained that Neubauer had shown favouritism to Caracciola, and Karl Kling, a member of the Mercedes squad in the ’50s, supported him. “Undoubtedly,” Kling said, “Lang was often not allowed to drive as fast as he could. You could write a novel about what went on in those times…” 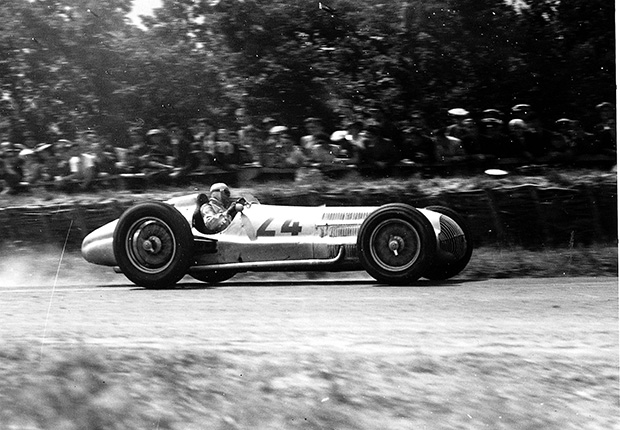 Whatever, Caracciola clearly appreciated his friend Neubauer. Among the items I studied was a photo album signed and dedicated to him in 1936. Among Neubauer’s most treasured possessions, it was not a surprise to see it valued at around £5000.

For a time there was also a feud between Caracciola, the old master, and Rosemeyer, the young pretender, but Neubauer relates that this was finally resolved over a bottle of champagne at the Roxy Bar in Berlin. Civilised times, were they not?

Most affecting of all in the archive I found the diaries. These were not desk-sized volumes packed with technical detail, but of the pocket variety. On many days there is no entry at all, on others a single word, such as ‘Training’. But others make the roof of your mouth dry. ‘War with England and France,’ Neubauer wrote on Septemer 3, 1939. ‘What now?’

There is a simple and touching eloquence about his recording the death of a driver. On January 28, 1938, Neubauer writes the name of Bernd Rosemeyer, with a cross pencilled alongside, and it is the same with Richard Seaman, who died at 11.35pm on the night of Sunday, June 25, 1939, after crashing in the rains of Spa while leading the Belgian Grand Prix.

Another page – priceless in itself – is simply entitled, ‘Alle!! bei uns!!’ (‘All together!’) Neubauer and his wife had given a lunch party for the drivers, and the signatures are there of Caracciola, von Brauchitsch, Lang and Seaman, together with those of their wives. The price put on the diaries (which run from 1932 through to 1975), with other memorabilia, was up to £80,000. 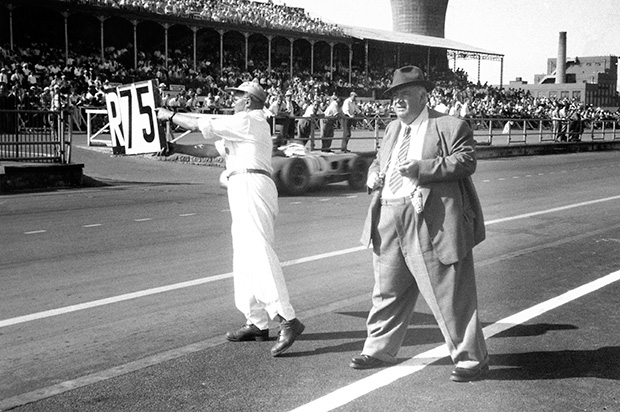 If the ‘30s constituted undoubtedly Neubauer’s favourite period of motor racing, he was also Mercedes team manager in 1954 and 1955, the era of Fangio and Moss, and an especially poignant entry in the diaries comes on the weekend of June 11/12, 1955, when the worst racing accident in history occurred at Le Mans.

In the early hours of Sunday morning, the Mercedes directors decided to withdraw the remaining can, one of which, the Fangio/Moss 300SLR, held a four-lap lead.

‘Monday: Six-thirty: still raining, cool. Nine: drive to Strasbourg, then Stuttgart. Dinner, too much to drink. Home, telephone call from Uhlenhaut. Bed, couldn’t sleep for thinking about the accident at Le Mans.’

I took a lot of notes that morning in London. Wish I’d taken more.