Taken from the December 1997 issue of Motor Sport

No one ever had Enzo Ferrari’s number better than Phil Hill. “The Old Man used to produce these annuals at the end of every season, and the only way you came off any good in them was either to be on especially good terms with him, or to die. If you died – it had to be in a Ferrari, of course – you got your picture in colour, with big ruby lips painted on! Terrible, huh? Peter Collins had a beautiful one done, over a whole page, with the lips and everything…” 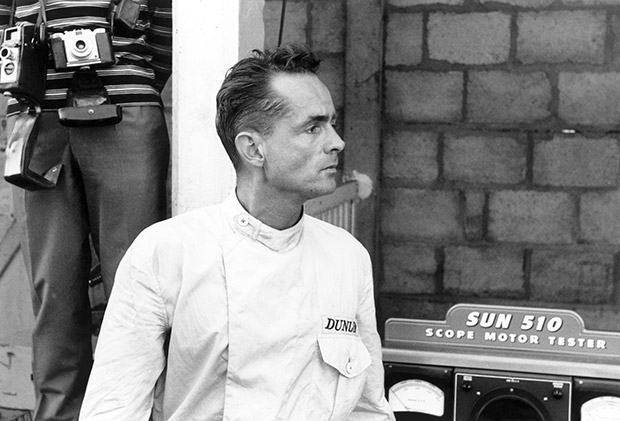 I doubt that anyone more intelligent than Hill ever stepped into a racing car, and certainly – despite excelling at such circuits as Spa and the Nürburgring – he was always mindful of the risks in a sport infinitely more perilous then than now. In the course of an immensely successful career, somehow he never once hurt himself, but over the years lost a great many friends. A sensitive man, he is also a marvellously laconic raconteur, who laces his memories with the black humour characteristic of his generation of drivers.

Consequently, whenever Hill comes to a Grand Prix, two or three times a season, we journalists fight to sit near him at lunch. It is 30 years since he retired, so not too many of us knew him during his racing career, and those who did say he was not an easy man to know back then. “He was a good bloke, certainly not rude or off-hand,” Eoin Young remembers, “but he always seemed uptight.”

Not anymore. As a rule of thumb, retired racing drivers are much better company than their active counterparts, not least because they can speak with impunity, tell the real story, rather than the sanitised, agent approved nonsense which routinely insults our intelligence in the paddocks of the late ‘90s.

In these surroundings, therefore, to chat with a man like Hill is a particular pleasure. Now 70, he still drives a racing car like a man half his age, still talks about them with passion and depth of knowledge – indeed, one suspects that he likes motor racing more in retrospect than he did at the time; undoubtedly that is so when it comes to his feelings about Enzo Ferrari, for whom he drove so many years. 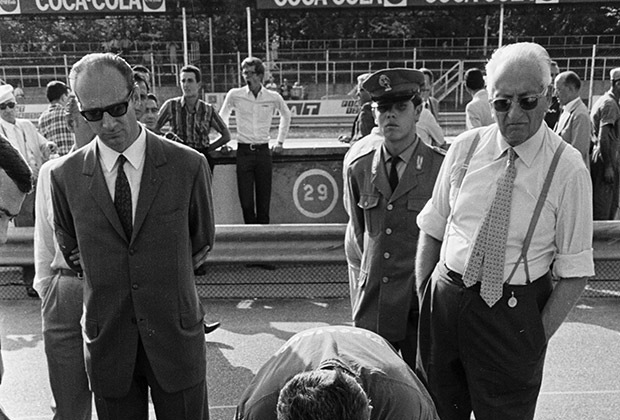 The Old Man was one thing; quite another was the Old Lady – Laura, fearsome wife of the Ingegnere, who in the early ’60s suddenly began taking an active interest in the team, even attending the races, a practice long-since abandoned by her husband. Hill is mesmeric as he talks of the blend of glory, tragedy and farce that was life at Maranello back then.

Through the 1961 season it was clear that either he or Wolfgang von Trips, his Ferrari team-mate, was going to become World Champion. “Face it, friendship between racing drivers is not a normal situation: you try to beat the other guys on the circuit all day, and then at night you’re supposed to forget all that. But Trips and I always got along well.”

At Monza Hill won both race and title, but in appalling circumstances, for his team-mate – and rival – was killed in an accident on the second lap. “I didn’t know he was dead, until I came into the pits at the end. I drove right in, and I said, ‘How’s Trips?’ I knew it was him, because we got an order board soon after the accident, and he was missing from it. I saw the way Carlo Chiti evaded my question, and I just knew right then…”

After touching wheels with Jim Clark’s Lotus on the approach to Parabolica, von Trips’ Ferrari had run off the road, brushing aside a wooden fence. Fourteen spectators died, with dozens injured. As after Alfonso de Portago’s accident in the Mille Miglia four years earlier, there were calls from the Vatican that motor racing be immediately banned. Ferrari found himself under siege. 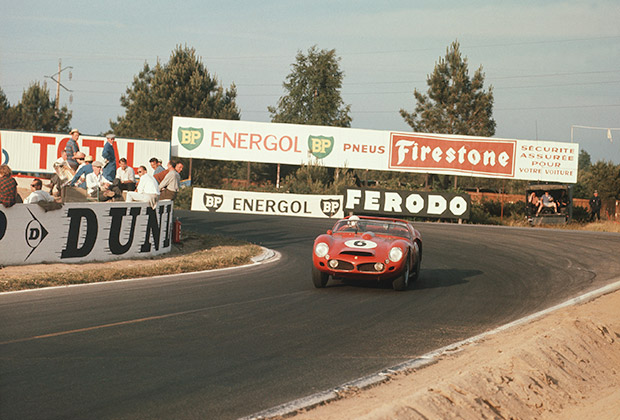 “Yeah, the Vatican always pitched in on these occasions,” Hill remembered. “In Italy they love racing, but after a fatality there’s always this rush to blame the car, and the people who built it – which was particularly unfair to Ferrari, because the one thing his cars never did was break.

“The whole Trips thing was a big trauma. I was with Ferrari for days afterwards, and there was all this, ‘Oh, what are we going to do?’ kind of stuff. You can’t imagine what it was like. It seemed like everyone in the damn country was milling around Maranello, and there’s Enzo Ferrari, with three days’ beard growth, and wearing bathrobes all day – he’d been through it lots of times, and I always felt he regarded his drivers like a general thinks of his soldiers. Insofar as he was fond of any driver, I guess he was fond of Trips, but… Ferrari was a great actor, you know. Did he go to the funeral? No, he didn’t. He sent the old lady…”

Hill and Richie Ginther, the third Ferrari driver that season, also went to Cologne to pay their final respects, and Phil admits that he approached it with dread. “For all the Germans, Trips was going to be their new World Champion, and then I had to go as this terrible disappointment.”

If it is a cliché that Grand Prix drivers raced for the love of it in those days, it is also true. Stirling Moss reckons he earned about the same as a surgeon, and he was by far the best-paid driver of the time. In an era when private jets are de rigueur in Formula 1 (even among those who have yet to win a race), it seems barely credible that in 1961 the World Champion travelled to Cologne by train, but he did. 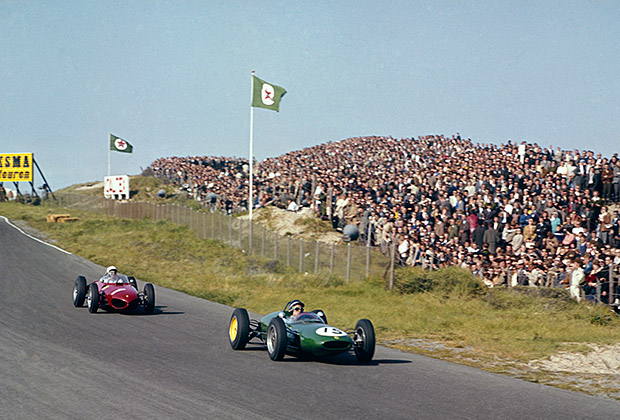 “Richie and I took my Peugeot, and drove up to Milan, where we just barely made it onto the train – I had to pull him aboard when it was actually under way! We get to Cologne, and there is Amerigo Manicardi, who was in charge of Ferrari sales worldwide, and about the best guy in the place. He had been sent to take Mrs Ferrari to the funeral, and keep her out of trouble.

“The funeral was the worst thing you ever could imagine. They had Trips’ Ferrari sports car there, and they’d built this platform on the back, to carry the coffin. And the kid that drove it didn’t quite know how to do it; he just kept slipping the clutch, and by the time we’d got a couple of miles down the road, where the services were, it was about cooked.

“It was just a bad business all the way around. It was raining and dark, and we had to go along at the pace of this old woman, with the lantern hanging in front of her, you know… Awful, but we got through it.

“Trips’ friends had little receptions afterwards, and while we were there, all of a sudden Mrs Ferrari said to me, ‘Pheeleel, are you going back down now?’ She’d decided she didn’t like Manicardi – he didn’t like her, either! – so she said maybe Richie and I would let her go back with us. ‘Where are you going?’ she said. I panicked – I said, ‘We’re going to… Stockholm! She said, ‘What a shame,’ and meanwhile Manicardi’s doing all these winks and everything…” 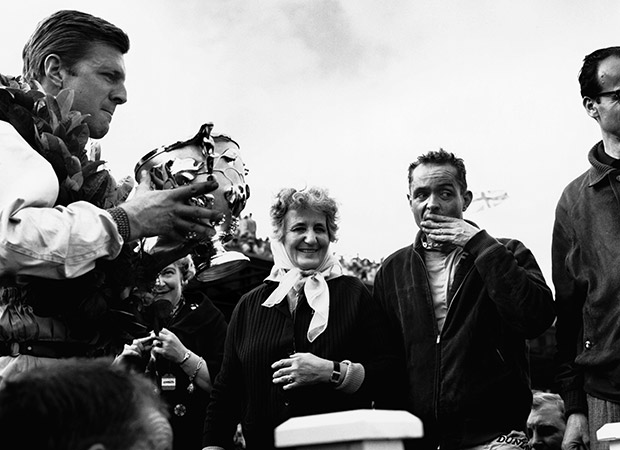 Laura Ferrari on the podium with von Trips and Hill at Aintree, 1961

Hill and Ginther retraced their steps, taking the endless train trip back to Milan, then climbing aboard Phil’s Peugeot 404 – “That was what a World Champion could afford back then!” – for the journey down to Modena.

“We’re going along, and all of a sudden Richie says, ‘Duck! Duck!’ Instinctively, I just did what he said. And he says, ‘It’s the old lady!’ And we’re supposed to be in Stockholm! The next day we get to the factory, and we see Manicardi. I said, ‘Christ! Richie saw you at the last second! I didn’t even see you – I just ducked…’ And Manicardi then told us that Mrs Ferrari had said, ‘Manicardi! Isn’t that Phil Hill’s car?’ And Manicardi said, ‘I don’t know – there’s nobody in it!’ And she said, ‘Oh, that’s all right, then.’ That was what it was like, living with Mrs Ferrari…

“Manicardi was a really good guy, and good at his job, too. And you know what? He had a heart attack, in his 40s, and Ferrari didn’t send one person to his funeral. You kind of revered him, you know, but he was a hard guy to like back then…”