No disrespect to Lewis Hamilton but, from the moment he tested positive for Covid-19, Sakhir qualifying was always going to be absolutely fascinating.

Lewis has hogged it a bit over the past seven years and here was a different narrative. While feeling for Stoffel Vandoorne, you hoped against hope that Mercedes would put George Russell in.

The word on the street was that the deal needed some financial lubrication. This was a new, short circuit layout with a bumpy surface and only four braking ‘events’ as F1 likes to call them. Anything could happen. It could be one of those freak races and Williams might score points. They don’t have a point to their name in 2020 and Haas has three.

But let’s say that in one of those freak races that F1 sees every now and again – like Istanbul – Russell had managed to get it home eighth. That would be worth four points and would elevate Williams above Haas in the constructors’ championship, which would be worth $3-4m. With George gone though, they had no chance. Which made a good starting point for the negotiations. How they finished up, Toto Wolff will know, but the outcome was the one George and F1 fans wanted.

Across social media, the questions were being asked: has a world champion ever vacated his car? And whenever did a decent driver get an unexpected chance in F1’s fastest car?

To deal with the last first, in 1978 the Lotus ’79 was today’s Mercedes W11. Mario Andretti had already won the championship when team-mate Ronnie Peterson died after a multi-car accident at the start of the Italian GP. There were just the US / Canadian races left and Lotus boss Colin Chapman put Frenchman Jean-Pierre Jarier in his second car.

Jarier, at 32, was no young up-and-comer. He had been mighty quick in a Shadow three years earlier but, unpredictable, had regressed to being the butt of James Hunt’s commentary vitriol in the early days of the Beeb’s F1 GP coverage! 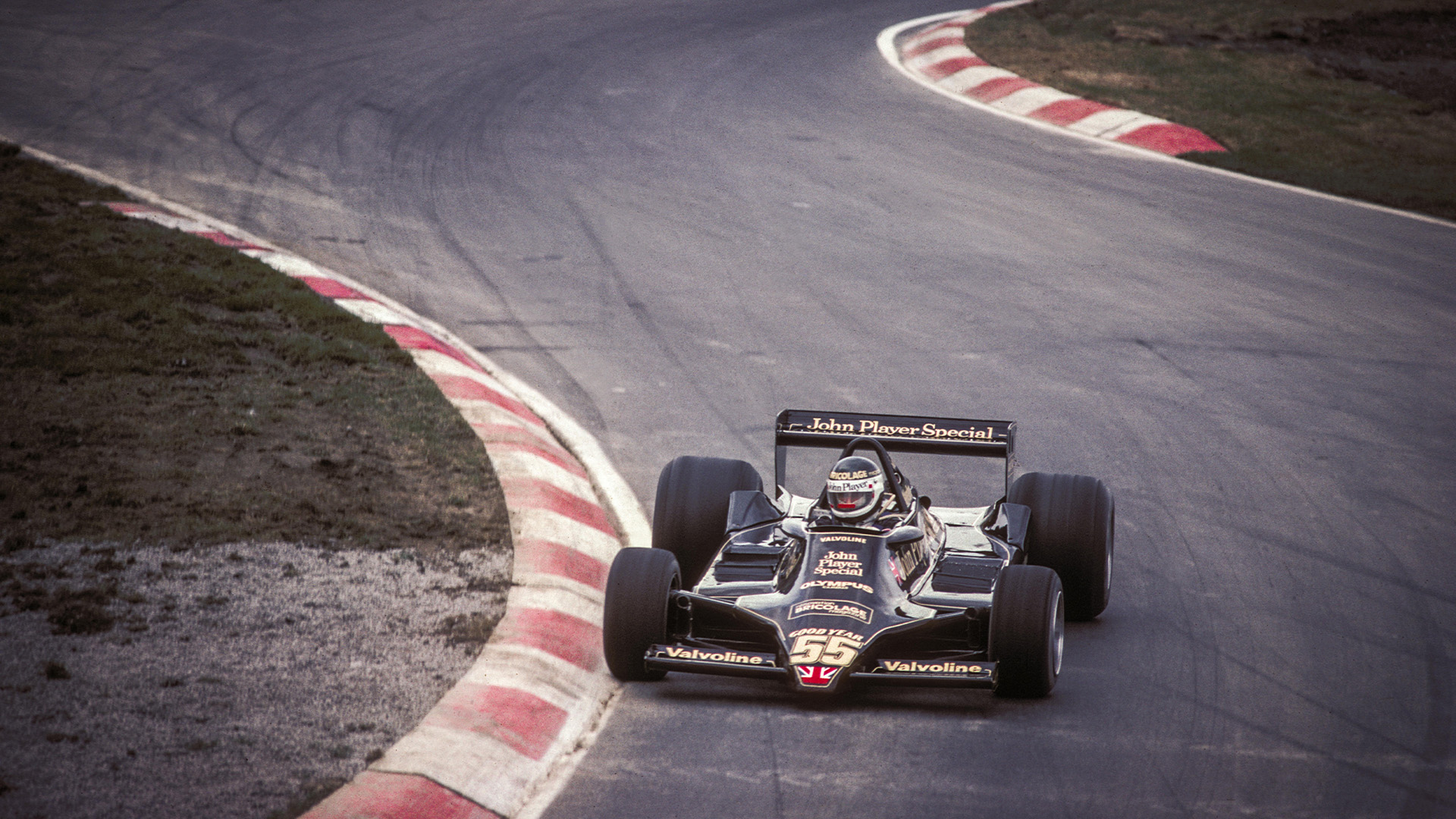 The last time a decent driver got an unexpected drive in the fastest car, Jean-Pierre Jarier disappeared with a 25sec lead

For the record, at Watkins Glen Jarier qualified eighth and would have finished on the podium with fastest lap if he hadn’t run out of fuel. Then, in Canada, he stuck it on pole and disappeared off into the far yonder, leading by more than 25sec before retiring with an oil leak after 49 of the 70 laps. Which, in the minds of some, removed a bit of sheen from Andretti and prompted ‘told-you-sos’ from those who believed a monkey could win in that Lotus.

As for the absent world champion bit, the previous season Niki Lauda had fallen out with Enzo Ferrari about his post-accident treatment and secretly signed for Bernie Ecclestone’s Brabham team. He was also trying to take No1 Ferrari mechanic Ermanno Cuoghi with him to Brabham. Mrs Cuoghi though, was family-centric and not that keen on a move to Chessington! When Enzo Ferrari found out, he went apoplectic and asked Cuoghi if he was leaving. When the hapless fellow said he was thinking about it, Enzo made his mind up for him by firing him!

When Lauda landed in the US, he was greeted by a tearfully distraught Cuoghi, no longer allowed to tend his car that weekend. Niki secured the necessary points to clinch his second title and then told Enzo where to stick his car for Canada and Japan. Officially, his absence was ‘medical reasons.’ And no, I’m in no way implying that Hamilton does not have Covid or has fallen out with Mercedes!

The task facing Russell is far tougher than Jarier had to contend with. Today’s cars are infinitely more complex and he had precious little preparation time. Perhaps more pertinently, there’s also cockpit comfort. To perform well the car has to feel like an extension of the driver and Russell’s first problem was his size 11 feet, which have been forced into size 10 boots in a chassis that has been designed around smaller men: Schumacher, Rosberg, Hamilton and Bottas, none of which are anything like George’s 6ft 2in. Not too big a drama over a single lap maybe, but a bigger issue if you are cramping and trying to contend with Max Verstappen over 80-odd laps!

Russell started brilliantly on Friday, topping both free practice sessions. But in Saturday practice things didn’t go as well and he was missing six tenths to the ultimate pace as he admitted to trying too hard and making mistakes.

‘Mr Saturday’ as Russell is called, due to his 36-0 qualifying record versus Robert Kubica and Nicholas Latifi, knew he was going to have a fight on his hands to maintain that unbeaten record. Valtteri Bottas might not be Lewis Hamilton but, over one lap, he has an average deficit of under 0.2sec over the previous two seasons. 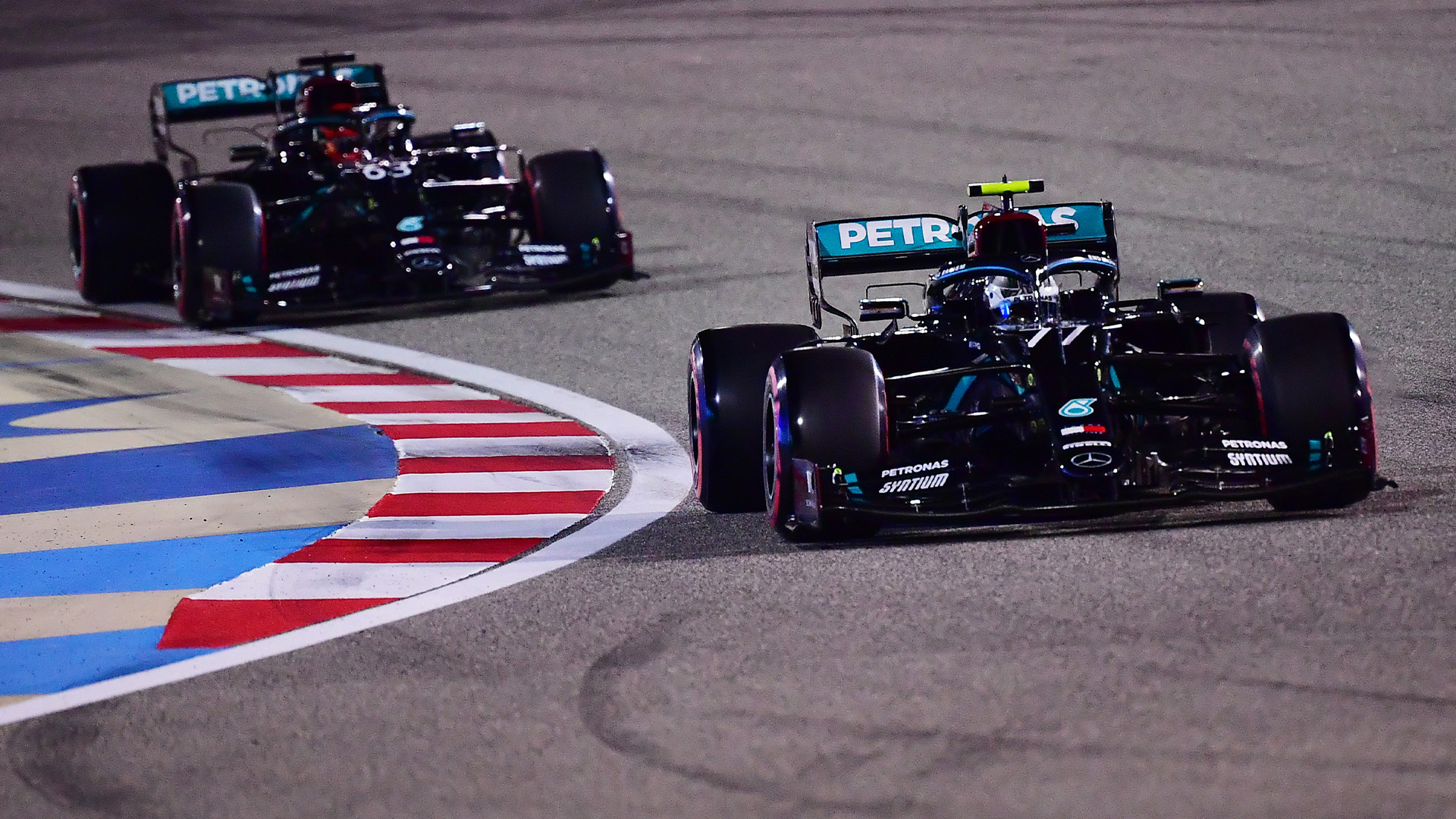 It is to Russell’s great credit that when Bottas set pole with 53.377sec, George very nearly stole it from him with 53.403sec, itself good enough to pip Max Verstappen’s Red Bull by three-hundredths. Unfortunately for Russell, that means he will start on the dirty side of the grid tomorrow. Mercedes has managed to clear Q2 on the medium tyre, however, which means that if Russell can get it off the line and run with Bottas and Max, he could be in the fight.

The intrigue surrounding Mercedes should not detract from Charles Leclerc who drove one of the laps of the year to put his Ferrari on row two, just 0.18sec down on the Red Bull.

Leclerc had not demonstrated that kind of pace any time previously and it came like a bolt from the blue on his first Q3 run. With shades of Alain Prost many moons ago, Charles climbed out and took his helmet off – he knew he wasn’t going any quicker than that. 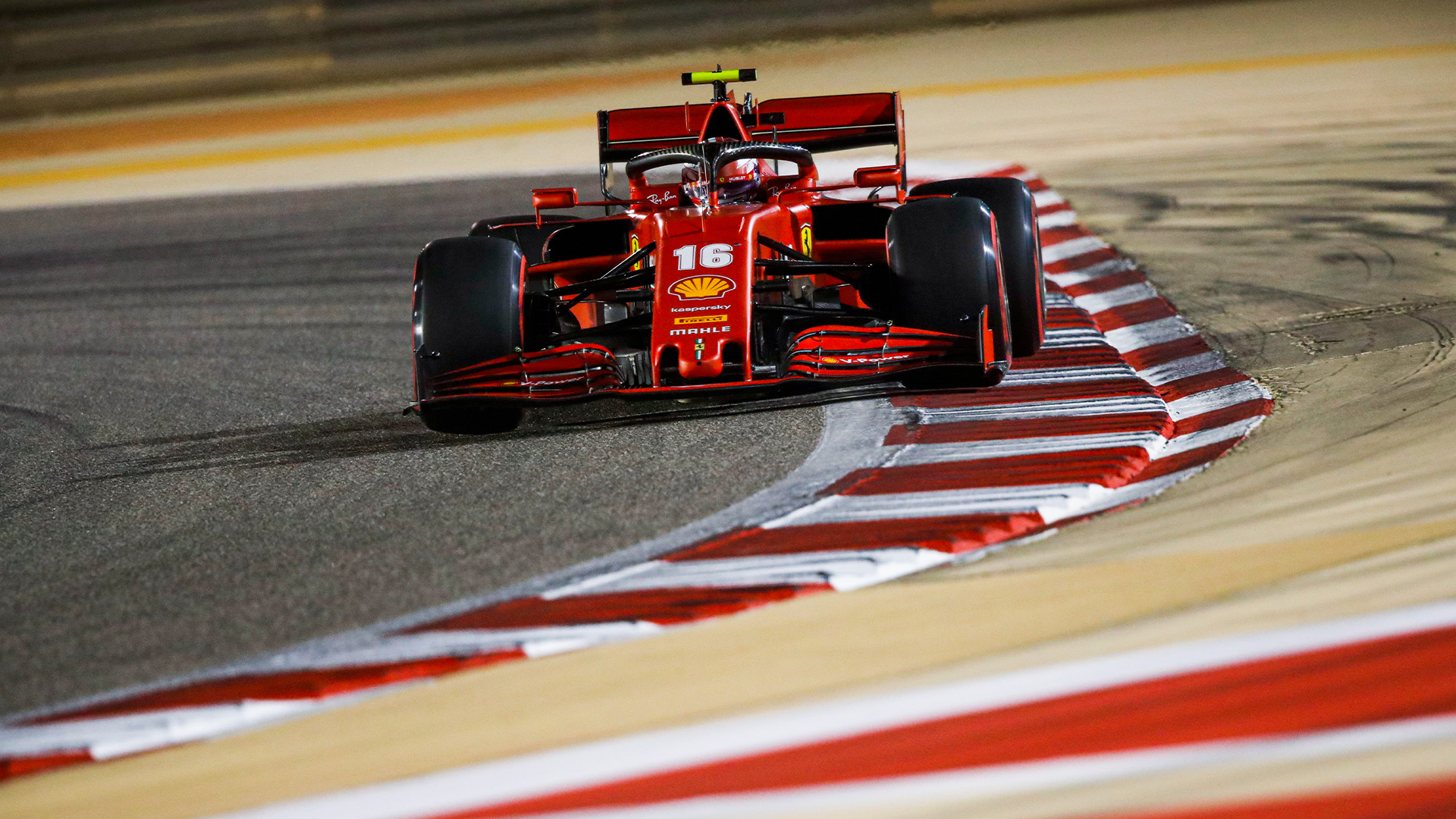 Leclerc’s first Q3 run was so good, he ended his session there

“I’d like to say it was the perfect lap but I did brake so late for Turn One that I had a bit of a snap coming out and wondered if the tyres would last the lap.”

They did though, and Leclerc found even more time further around it, even admitting that watching his mate Pierre Gasly’s onboard footage had been responsible for some of it!

The pressure on Alex Albon is ramping up on all sides. In F2 Yuki Tsunoda was busy winning and securing more F1 Superlicence points, at the same time increasing Honda’s desire to push him into F1 next year through the Red Bull programme. So, a fall-back AlphaTauri seat for Albon could be fast disappearing. And at the same time as Alex was failing to make Q3, Sergio Perez was doing another sterling job to put the first Racing Point fifth… 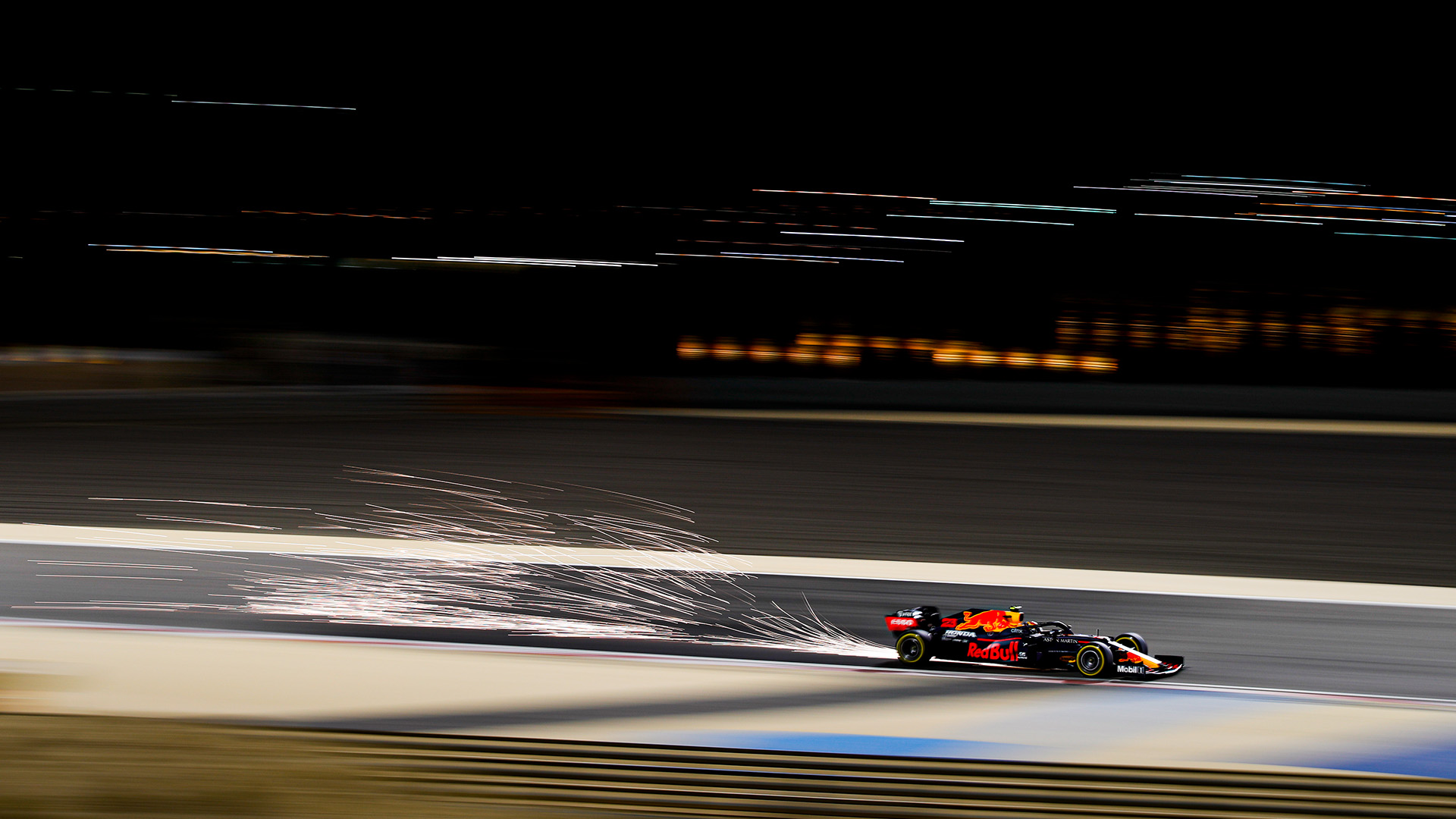 Leaving the spark behind: Albon (here in practice) missed Q3

If it all seems a bit late for Daniil Kvyat, nobody seems to have told him and the Russian did a great job to outqualify Gasly for only the third time this year and record comfortably his best qualifying performance of the season to put his Alpha Tauri sixth, right in the middle of the fierce scrap for third place in the constructors’ being waged by McLaren, Racing Point and Renault.

The first of the French cars was next, in the hands of Daniel Ricciardo, who was five-hundredths adrift and not too happy. “I didn’t get it together with either set of tyres in Q3 and I don’t really know why,” he admitted. He was 0.08sec faster than team-mate Esteban Ocon in Q2, which was enough to ensure that the Frenchman didn’t make the Q3 shoot-out, but he will at least be able to go to the grid on the medium tyre tomorrow, which could well pay dividends. 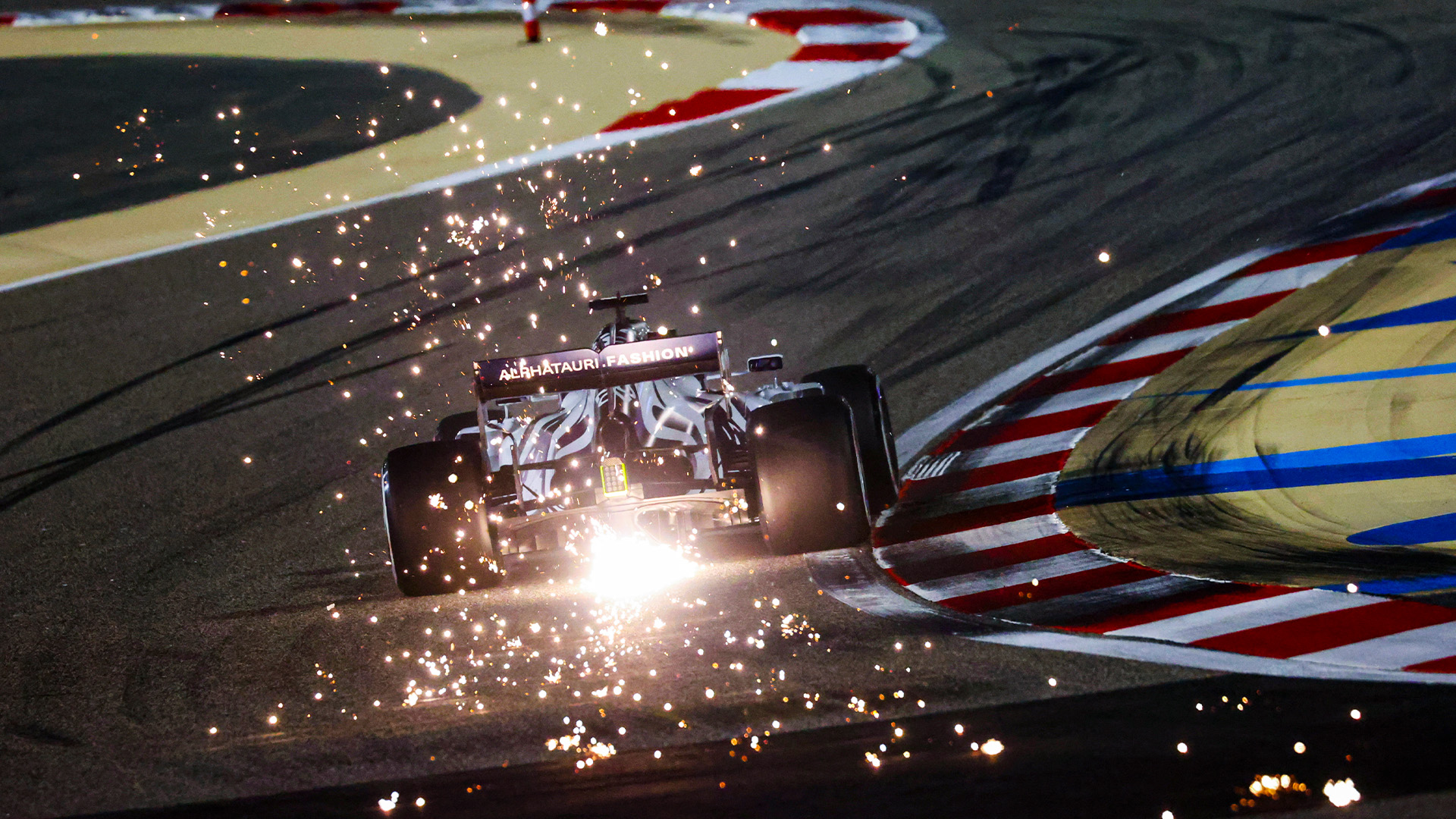 The first of the McLarens will start eighth with Carlos Sainz, who admitted that his fourth fastest time in Q2 had been a bit of an outlier due to advantageous tows. Right behind him is Gasly with the second AlphaTauri, with Lance Stroll completing the top 10 in the second Racing Point.

Where is the second McLaren? Lando Norris had been right there in Q1, fourth quickest and only 0.03sec behind his old mucker Russell, but it went awry in Q2 when he ran too early, did too slow an out lap and didn’t generate enough tyre heat. Trying again, the third sector went wrong. Fifteenth on tomorrow’s grid has sentenced him to a tough afternoon.

Further back, the F1 debutants in less glamorous machinery, Jack Aitken and Pietro Fittipaldi, grandson of twice world champion Emerson, both did really solid jobs. Aitken was ahead of Williams team-mate Nicholas Latifi for the first two Q1 runs, the Canadian eventually shading him by a tenth. Fittipaldi, meanwhile, lapped 0.72sec from Kevin Magnussen at Haas, knowing he would start from the back anyway due to engine penalties.

So, who wins tomorrow? Bottas needs to and Russell would dearly love to. But, you feel, it’s an enormous ask for Russell and one that, rightfully, should be beyond him. But with the kind of talent he has, you just never know. With Hamilton in his forced isolation, the man who must really be fancying it, is Verstappen. He’s only stood on the top step of the podium once this year and will be feeling it’s time he did so again.