There had been uncertainty surrounding Red Bull’s driver plans for 2021 for a while, and it might have been leaking out as early as Thursday evening, but when Sergio Perez was selected over Alex Albon the decision still came as a surprise.

Make no mistake, this is a massive departure from the whole Red Bull ethos, and it is perhaps reflective of the limbo that the team finds itself in on many fronts.

Before I even get onto the driver decision itself, there are many other areas that we need to address when it comes to Red Bull. Firstly, the team still doesn’t have confirmation of the power units it will be running in 2022. Not a big deal you might think given that’s over a year away, but the development of the new generation of car can begin properly in just 14 days’ time and every team will be turning a huge amount of attention to that project.

2022 offers the chance of a reset of the competitive order, with a massive change in the regulations that mean brand new cars are being designed. The power unit is a central part of the equation, not just in terms of performance but also packaging and layout, so certainty on that front is important.

It is likely that Red Bull will take over the Honda power unit IP and run the project itself, but that has still yet to be finalised. Either way, it’s a big challenge for the team to take on at a time where the new regulations provide a massive one on their own.

But Red Bull wants to get as much as it possible can under its own control, so by essentially becoming a power unit manufacturer it will be as integrated as possible with its own design. That’s the upside.

At the same time, it loses its title sponsor in the form of Aston Martin, courtesy of the Racing Point rebranding for 2021. With that goes a not-insignificant amount of money, and team principal Christian Horner insists there are no immediate plans to plug that gap, but right now it seems like money isn’t an object as a new budget cap will actually lower expenditure.

So Red Bull could be well-placed from a power unit and financial point of view, even if it is faced with significant work to do. But the driver situation is a curious one.

For the first time since Mark Webber was signed from Williams in 2007, the team has gone against its whole identity and shunned the young talent it had nurtured at its junior team in favour of signing a driver from a rival outfit. OK, Perez was becoming a free agent, but he was not a Red Bull driver.

And it leaves you wondering what the wider thinking is behind the decision.

Perez is a short-term fix. He’s a very good driver – don’t get me wrong – and it’s good for him that strong performances have been rewarded with a better seat rather than a spot on the sidelines, but the team already has Max Verstappen and comfortably finished second in the constructors’ championship this season, with a car that was never going to let it overhaul Mercedes.

Perhaps we could look at it that Red Bull expects to be a real threat to Mercedes next year, and feels the need to have both drivers scoring highly each week, something it is more likely to get from Perez. But from a business sense – given it has a young driver programme and invests so much in it – surely there was also a strong case to stick with the young driver you’ve invested in, who showed encouraging signs towards the end of the season?

Not only that, in Pierre Gasly there is another talent who has shown great resilience, skill and potential over the past 18 months who would be a great redemption story for the team if it gave him another chance. 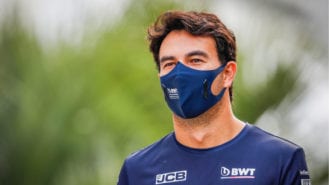 Red Bull has confirmed that Sergio Perez will partner Max Verstappen at the team for the 2021 Formula 1 season, with Alexander Albon stepping back into a reserve driver role.…

Both Albon and Gasly do come with risk though, and what Perez does is give Red Bull a clear view of just how good Verstappen is and what it should expect from its juniors. But it’s still a slightly strange move.

Perez also hasn’t done anything over the past five years — despite how good he has been — that screams future world champion. And now the younger drivers have seen their pathway blocked for at least one year.

It all leaves Red Bull in a very strange situation. It has two good talents, albeit neither seemed quite ready to effectively partner Verstappen, but by backing neither at this stage it now means only one of Albon or Gasly has a slim chance of a Red Bull seat in 2022 if Perez doesn’t stay longer. Albon doesn’t get to prove himself anymore, and apparently Gasly’s performances this year weren’t convincing enough to give him another shot — bridges clearly need rebuilding — so the opportunities appear limited for both.

Basically, what Red Bull needs Perez to do is surprise the team in one way or another. If he does a solid job as expected, picking up more points than Albon or Gasly but not quite hitting Verstappen’s level, then it doesn’t stand to gain much at all. On 2020 evidence, you could estimate it finishes second to Mercedes by 150 points rather than 250.

But if Perez can threaten Verstappen, then it’s a much stronger force in 2021. Or if he really struggles then it speaks to the quality of the two drivers Red Bull has recently dropped (and highlights a problem providing a car for two drivers to perform in).

It’s a decision that – while great for Perez – suggests some confusion within Red Bull about where it’s going and what it’s trying to achieve with different parts of its team. Perhaps even doubt about how it prepares and treats its young drivers at the moment.

It could well be instant success is being prioritised over a longer-term view given the uncertainty from 2022 onwards, but this is suddenly not a team on a clear path. That’s not to say it won’t be successful, but Red Bull is certainly at a crossroads in terms of its identity.