Lewis Hamilton has been awarded a knighthood in the 2021 New Year Honours List, becoming the fourth Formula 1 driver to receive the honour.

It crowns a year that has seen him equal Michael Schumacher’s record of seven world championships, and become the most successful Formula 1 Grand Prix driver in history, with a record 95 wins.

He was also named the BBC Sports Personality of the Year, and has led calls for greater equality and sustainability in motor sport, setting up the Hamilton Commission to improve the representation of Black people in motor sport, as well as his Team X44 entry in next year’s all-electric Extreme-E racing series.

Stevenage-born Hamilton is the first active Formula 1 driver to be knighted; Jack Brabham, Stirling Moss and Jackie Stewart were given the honour many years after their Grand Prix careers had ended.

It follows a recent trend of knighting prominent sports stars during their peak, including Andy Murray, Bradley Wiggins, Chris Hoy and Sarah Storey.

Hamilton was awarded the MBE in 2009 after winning his first championship. Calls for a knighthood have been growing as his titles have racked up. 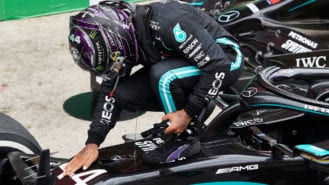 MPH: How much of Lewis Hamilton's success is down to his car?

Lord Hain, the former Labour Cabinet Minister, who is Vice-Chair of the All Parliamentary Group on F1, lobbied Boris Johnson to recommend Hamilton for a knighthood last year, following his sixth championship. The Group sent another letter to the Prime Minister following this season’s success.

“You have got Andy Murray, Mo Farah, Bradley Wiggins who have all been given knighthoods in recent years, and I cannot understand why Lewis Hamilton hasn’t,” said Hain earlier this year. “Frankly, it is unacceptable.

“He has broken the record for the number of Formula 1 races won, and he will be a world champion for a seventh time – records that are unlikely to be surpassed.

“This is a kid from a very deprived background, who is black, and has made it in what is a rich person’s sport – an incredible achievement.

“He has been inspirational on the whole question of racism and Black Lives Matter. He supports charities and works on climate change.

“On the topic of tax, which is said to be a niggle, Lewis is a top British tax payer. He has a house in London, and I have explained all of this. It’s baffling.”

It has been speculated that Hamilton’s residency outside of Britain — first in Switzerland and then Monaco — as well as his use of a legal means to avoid taxes on his private jet, which he has now sold, may have delayed his knighthood.

But Hain says that the driver remains one of the top 5,000 taxpayers in Britain.

Hamilton regularly speaks about his love of the country. On Boxing Day, as part of the Radio 4 Today programme he guest-edited, he said: “I’m so proud of where I come from. I have so much love for Stevenage.

He collected his MBE from Buckingham Palace in 2009 and revealed that the Queen told him that she had “watched very closely” the final laps of the nail-biting 2008 Brazilian Grand Prix where clinched the title at the final corner.

Earlier this year, he said that he would welcome an opportunity for another Royal meeting. “Like everyone, I’ve grown up adoring the royal family, if one day I am honoured to be up in front of the queen again, it would be the happiest day ever to see here again, she’s an icon, such an incredible individual,” he said.

Hamilton has previously said that he would use the title, smiling as he said he would “enforce it on everybody”.

However, the idea prompted amusement amongst rivals when it was raised in a press conference at the Brazilian Grand Prix last year. Sebastian Vettel asked if he would get to keep the sword from the ceremony, and Max Verstappen asked whether he would really have to call Hamilton ‘Sir’.

“We are so much older than Max, he has to call us mister, at least, and then you’ve got to call Lewis Sir,” responded Vettel.