Formula 1 celebrates the 70th Anniversary of the World Championship at Silverstone this weekend: where seven decades ago the first points were awarded following the Grand Prix d’Europe.

The rules for the grand prix series – initially known as Formula A – had been set out three years previously and 1950 saw the dawn of the championship, with a points structure and the inclusion of the Indy 500.

The first years would be stuttering, but the series would find its feet and grow into the international spectacular that it now is.

Peter Higham tells the story of the Formula 1 championship’s formation in an extract below, taken from his Formula 1 Car by Car 1950-59 book.

The Association Internationale des Automobile Clubs Reconnus that had governed motor racing before World War II was revised in 1947 as the Fédération Internationale de l’Automobile (FIA). A subcommittee, the Commission Sportive Internationale (CSI), was appointed to shape new rules as the sport emerged from the dark days of conflict. The CSI met in October of that year and announced new GP rules for 1948–53. Originally known as Formula A but soon renamed Formula 1, these stipulated 4.5-litre normally aspirated or 1.5-litre forced-induction maximum engine capacity.

A motorcycling world championship had been organised in 1949 and, at a meeting in the last week of February 1950, pre-war racing driver Count Antonio Brivio, the Italian delegate to the FIA, suggested an F1 World Championship for drivers. The Grandes Épreuves of Britain, Monaco, Switzerland, Belgium, France and Italy, plus the Indianapolis 500, were announced as qualifying rounds with points awarded to the top five finishers on the scale 8–6–4–3–2 and an extra point to whoever set the fastest race lap. Indy meant that the championship extended outside Europe but it had little relevance during the 11 years it was officially included. 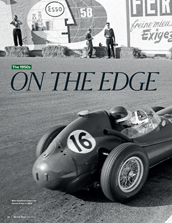 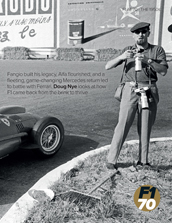 Just bear with me a moment, and think back to 2010. Nineteen grand prix races to decide the Formula 1 titles, and Sebastian Vettel and Red Bull-Renault wound up as…

The new World Championship began at Silverstone on Saturday 13 May 1950 with the drivers (and the top three in the F3 race) presented to the royal party by Earl Howe before the start. The race was awarded the honorary title of GP of Europe and was flagged off by Brivio. A crowd of up to 100,000 paid between six shillings (general admission in advance) and £2 2s (for the main pit grandstand) to watch a dominant Alfa Romeo 1–2–3. Alfa’s thirsty supercharged cars duly won the title but Ferrari exploited the larger- capacity normally aspirated alternative to challenge by the end of the season.

The most disappointing aspect for British fans was British Racing Motors. Equipped with a V16 engine, the BRM type 15 had been unveiled amid much hype at Folkingham airfield on 15 December 1949 and founder Raymond Mays gave a brief demonstration during the 1950 British GP meeting. However, the car did not appear in a championship race and Raymond Sommer broke its transmission at the start of his heat when it finally made its début in Silverstone’s non-championship International Trophy. Reg Parnell won a couple of lesser races at a wet Goodwood in September before both he and Peter Walker retired from the non-championship season finale in Barcelona. Goodwood apart, it had been a sorry start for Britain’s national team.