A record run of 48-consecutive points finishes and the chance of equalling the record for most wins in a season is over for Lewis Hamilton after he tested positive for Covid-19 post-Bahrain Grand Prix.

It leaves Valtteri Bottas seemingly with no obstacle in the path between himself and victory — barring a positive Covid-19 test.

The teams and drivers will be on a circuit layout they haven’t raced on before with the high-speed outer-loop circuit, one that places emphasis on power and Bottas will be in one of the fastest, if not the fastest car in Formula 1 history.

George Russell will replace Hamilton at Mercedes, and it puts Bottas under pressure to perform against a driver who will be stepping into the W11 for the first time this season.

Russell is a rival for the Mercedes seat for 2022 and an impressive performance this weekend could advance his cause no end.

If Russell were to beat Bottas, either in extending his record of always out-qualifying his F1 team-mate, or in finishing ahead in the race, then it would represent a setback that Bottas may struggle to recover from.

More realistically, if he can keep in touch with Bottas through the weekend, while getting to grips with the car, Russell will have proved his worth.

There are two other drivers out there too, hoping to impress with the unforeseen opportunity they have been handed.

The spare seat left by Russell will go to F2 driver and Williams reserve, Jack Aitken, while Pietro Fittipaldi will step into the Haas of Romain Grosjean, as he recovers from the burns sustained in last weekend’s Bahrain Grand Prix.

It means that there’s plenty to watch for — in addition to Russell. 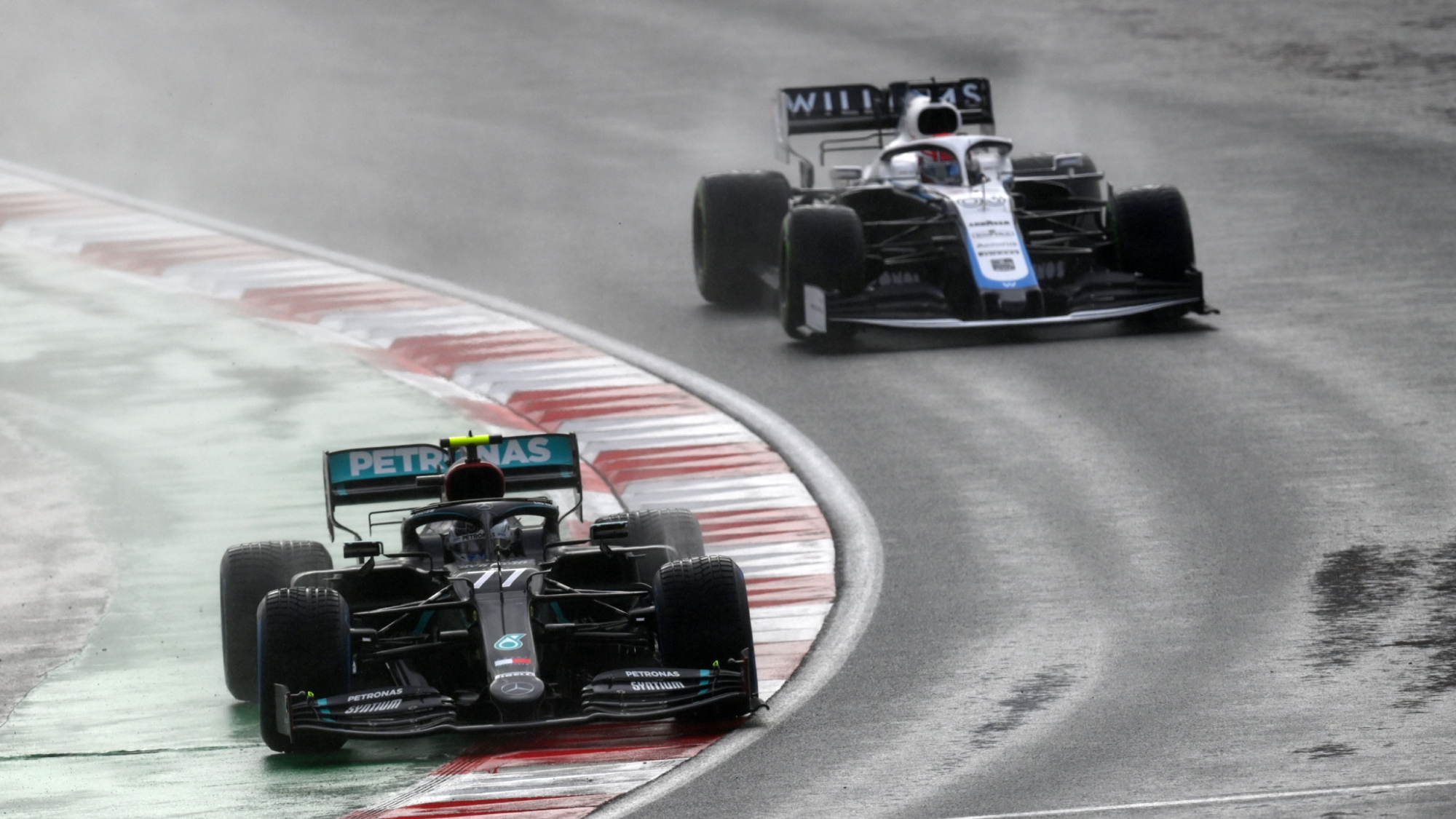 There will be a lot of eyes on the Mercedes garage this weekend as Russell steps up to replace Lewis Hamilton following the 2020 champion’s positive test for Covid-19 on Monday, but it isn’t the only team with a new face for this race.

Grosjean will miss this weekend as well as he continues to recover from his shocking crash on the opening lap of last weekend’s Bahrain Grand Prix, as he aims to return to the car in time for Abu Dhabi.

Pietro Fittipaldi will be in the VF-20 in his place and the 24-year-old will be taking part in his first grand prix weekend. He has tested previously during tests in Hungary and Bahrain for Force India and Haas respectively but is in for a tough time regardless around the outer-loop of the Sakhir circuit.

George Russell will race for Mercedes alongside Valtteri Bottas this weekend, following Lewis Hamilton's positive Covid-19 test. Williams has agreed to release the Mercedes junior driver for the race, where…

The Ferrari power unit still lacks a substantial punch versus those of the Mercedes, Renault and Honda variety and with three arrow-straight ribbons of tarmac separated by a handful of corners, it could be a rough time for Haas and co.

Jack Aitken will also have the chance to show he has what it takes in Formula 1, as he will fill in for Russell at Williams. Aitken has tested the 2020 car already this season, taking part in the first free practice session all the way back at the Styrian Grand Prix in July.

He has scored three podium finishes in Formula 2 this year with Campos, and only signed with the Williams to become a reserve driver at the start of the year.

Interestingly, of the three drivers making one-off appearances in Sakhir, only Aitken has sampled the car he will be driving, with Fittipaldi and Russell’s last bit of track time with Haas and Mercedes respectively coming at the end-of-season tests in 2019 in Abu Dhabi in last season’s cars. 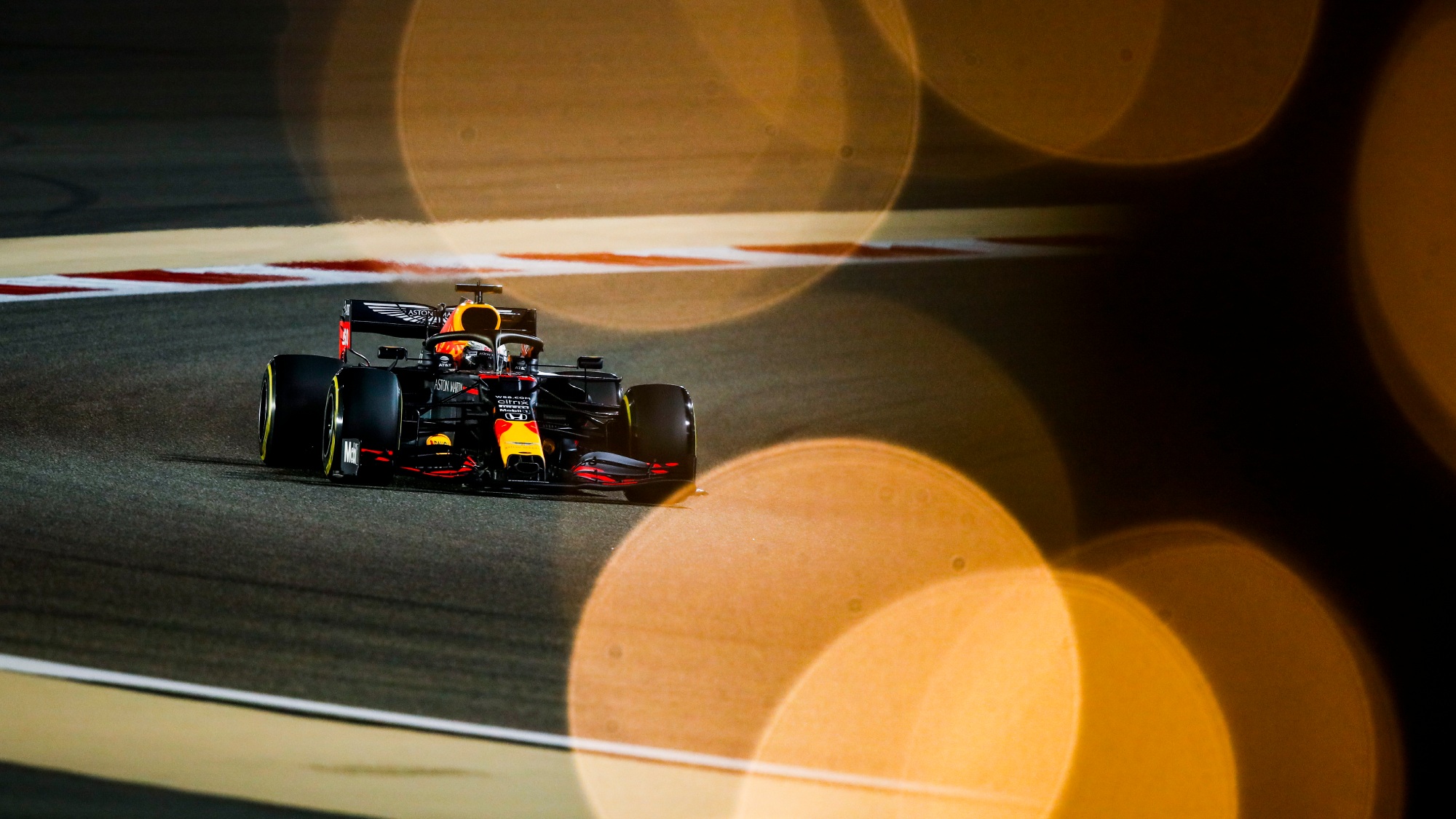 The Dutchman has been champing at the bit for a chance to battle for race victory with Mercedes but every time he has been in with a chance, Hamilton has had the measure of him and a runner-up spot has been the best Max Verstappen can do without a little fortune going his way, like at the 70th Anniversary GP.

Last weekend showed just how hard he will push to put Mercedes under pressure and, had there been more laps remaining after the safety car had been withdrawn, it may have paid off with a victory with the Red Bull man on fresher tyres.

The whole way through, Verstappen kept a close watching brief and had long since dispatched of Bottas at the start before the Finn suffered his puncture and setbacks.

Many times already this season, a defeated Verstappen has complimented his team’s efforts with acknowledgements that the Red Bull just didn’t’ quite have enough to be a match for Mercedes on race day. That could all change with Hamilton out of the picture.

A slight weak point going into the weekend though is the power requirement ramping up versus the Bahrain event last week, with the outer layout placing a greater emphasis on engine power versus overall package. Will it be enough to prevent Verstappen from mounting a serious challenge for victory?

It won’t be through a lack of effort that’s for sure. 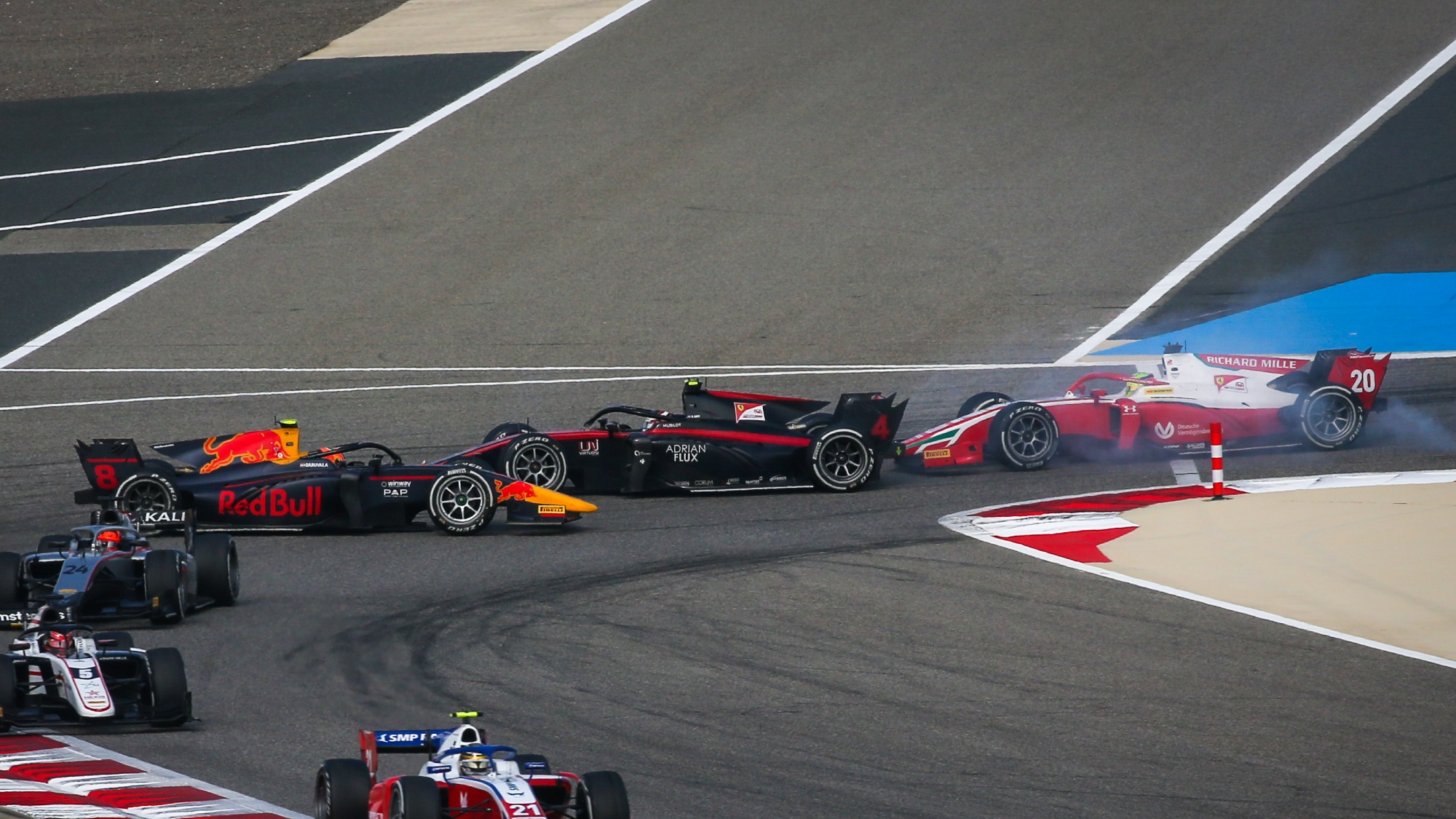 Ilott almost hits Schumacher after both locked-up into Turn 10

The F2 title comes down to this, a final feature and sprint race with just 14 points separating the championship leader in Mick Schumacher from the likely challenger Callum Ilott.

While the former has been confirmed as a Haas F1 driver for next season, Ilott has already said he will not have a seat at the top level next year, and will be fighting for pride.

He certainly made his life more difficult last weekend with a near collision with the championship leader during the sprint race resulting in a drive-through penalty, but crucially it means that he will not have to serve a grid drop on the deciding weekend.

The UNI Virtuosi driver’s podium in the feature race and Schumacher’s struggles in the sprint brought the gap down by four points, and one mistake from the championship leader could turn the title finale on its head.

The German was driving with the championship in mind but with Ilott taking the risks, Schumacher might not be able to afford to be so conservative this time around.

Whatever ends up happening, it will likely be another unmissable F2 weekend. 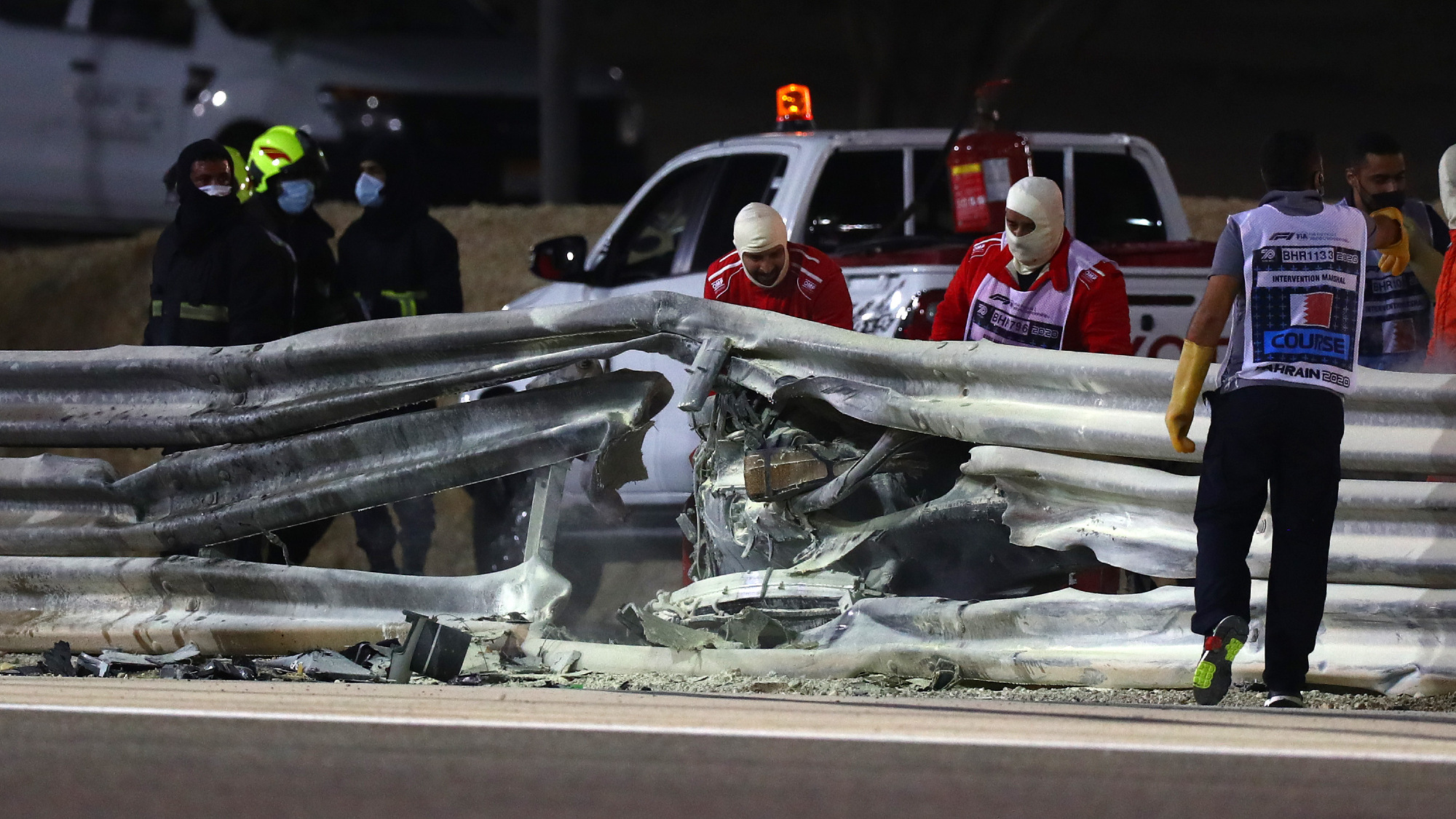 The armco was replaced by concrete barriers last weekend

Romain Grosjean’s shocking crash at the start of the Bahrain GP necessitated a lengthy repair job of the barriers and some quick thinking from race control and FIA race director, Michael Masi.

It resulted in the placement of concrete blocks on the exit of Turn Three where the Haas driver made impact, but it remains to be seen if the barriers have been entirely replaced and other potential problem areas have received attention since the race last weekend.

Masi was happy for the race to take place with the concrete blocks in place of the armco, but according to circuit designer Jarno Zaffelli, a different type of barrier for this weekend might not necessarily be safer.

“Nothing went wrong with the guardrail – nothing,” Zaffelli told Motor Sport. “The barrier behaved exactly as it’s supposed to behave.

“The energy of the impact was absorbed by the survival cell and the formation of the guardrail. Something which shows this is that the back part of the car travelled no more than ten metres. To me it was exactly what we should expect the guardrail to do.”