1) In order to try and get past Rosberg Hamilton asked to be put on a different strategy. But competing strategies is against team policy at Mercedes. They are free to race, but not to try to beat each other on strategy. “We won’t change that policy,” said Toto Wolff after the race. 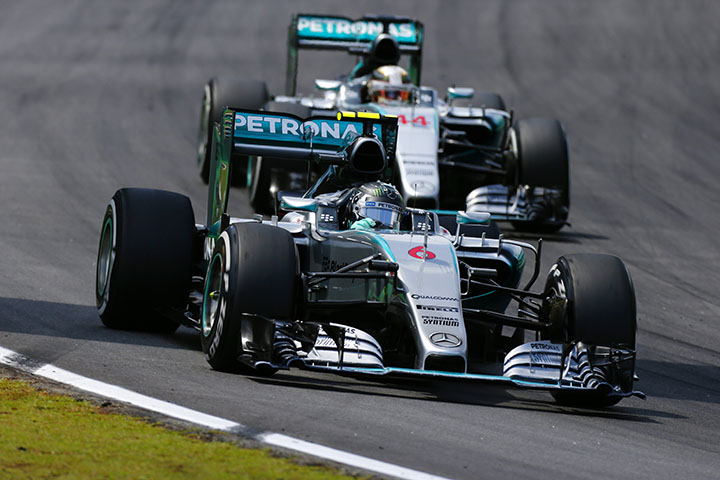 2) Sebastian Vettel on why it is so hard to overtake: “What we need to follow another car closer in the [preceding] corners is more mechanical grip… I think we need better tyres to allow us to go quicker. I think the solution is very simple. Unfortunately the sport is very political with different interests from different people. But since the responsible people can’t agree on anything the people who are literally paying for that are sitting in the grandstands.”

3) Maybe Hamilton could have prevailed over Rosberg were F1 the sort of no-holds-barred, flat-out contest that Vettel craves. But when it’s a complex game of tyre management, then pole position is gold dust. From there, it’s just about resisting any intimidation from the competition into the first corner, then running your race with maximum efficiency for the demands of the track, tyre and car on the day.

4) Though Hamilton insists he had the pace to have won, that’s far from clear. Certainly, it isn’t a view Rosberg shares. “I had the pace advantage today so of course he’s not going to come by me.”

5) The observable facts are a better fit with Rosberg’s assessment of their relative performance than Hamilton’s – i.e. Rosberg held a small edge, just as he had in qualifying. The advantage that pole bought him allowed him to run his race in the most efficient way, defining Hamilton’s role as the chaser, the frustration that followed from that leading him to push too hard, too early – for these tyres, on this car, on this day. 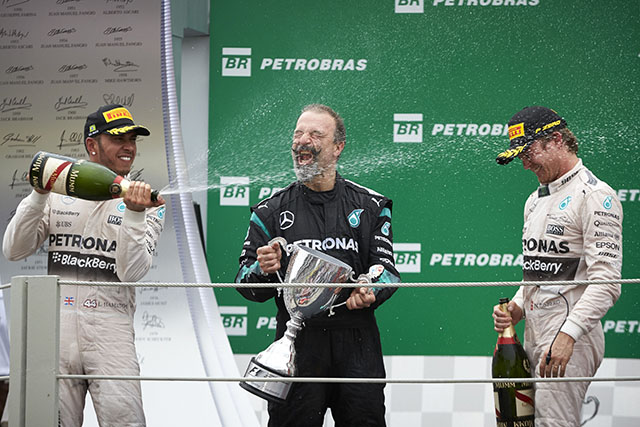 6) Given those circumstances, Rosberg did a better, more controlled, job. This has become a bit of a theme for the last few races and it seems to be chafing Hamilton’s collar a little. It’s bewildering to a driver that, as a default, is 100% convinced he can drive a racing car faster than Rosberg – or anyone else. Yet here is the damned inconvenience of reality not fitting in with that conviction.

7) Rosberg doesn’t think the new tyre pressure ruling has made any difference to their performance, but it did exclude Felipe Massa from eighth place after the right-rear tyre blanket was found to be 27-deg C above the 110-deg C limit when measured on the grid.

8) On Saturday Rosberg notched up five poles in a row. Did Hamilton – who arrived here in the midst of a lot of fuss about his Monaco road car incident – have an explanation? He was a little defensive. “Not really. I took the most pole positions of the season and I won the world championship. You can’t get it perfect every single time. Here I didn’t quite ace the first sector but the other two sectors were good.”

9) With the long, steep uphill section that links Juncao to the pit straight, the potent Mercs – which are still unique in their usage of the upgraded engine introduced at Monza – were in their element, with the best part of half-a-second’s advantage around a short lap. It’s a track with a very low sensitivity to downforce, and though more is always better than less – and the Merc W06 has plenty – what that does is increase the sensitivity of power, and the W06 has even more of that, relative to the opposition.

10) Rosberg was more on top of the weekend. Take Q2, as an example, when the only necessity is to graduate to Q3 whilst using the tyres on which you will start the race, he took things relatively easy, lapping half-a-second slower than the on-the-limit Hamilton. With the race likely to be marginal between two and three stops, each lap you put on your race tyres was potentially strategically damaging. “Is that quick enough?” he queried after his single tyre-conserving lap. “We will do the extra lap,” he was told. “You sure? That would be seriously compromising. Come on, that’s surely fast enough.” At this point, the team conceded and allowed him to return. It remained good for third quickest, a full 0.6s clear of the cut-off point. His analysis was spot-on.

11) Hamilton’s car ran during Friday trying out suspension components that will be fitted to the higher-chassised 2016 car and both carried an experimental duct on the nose that may or may not have been part of an aero experiment for next year, but which may also have been just a visual distraction from the experimental suspension parts.

12) The Ferraris looked a much closer match to the Mercs over a stint than a single lap. The pattern of the Ferrari’s sector deficits to the W06 (0.5% off in S1, 0.6% in S2, 1.2% off in the drag up the long hill that is S3) strongly suggested the horsepower difference.

13) Bottas was taking a three-place penalty for having passed Kvyat during a red flag on Friday afternoon. He reckoned he’d got all there was to get from the car and was a couple of tenths adrift of Vettel. Its main loss to the Ferrari was in the tight twists of the middle sector where its inert responses were visually losing it time to the more throttle-adjustable red car.

14) Team-mate Felipe Massa was struggling badly – unusually for him at his home track, where he’s been habitually very effective over the years. His main struggle was in sector two where he was running wide of the apexes. It was perhaps significant that the inner extremities of many of the apex kerbs had been rendered unusable by newly-installed speed blisters. Felipe is traditionally very effective at monstering kerbs.

15) Daniel Ricciardo’s Red Bull was fitted for the first time with the upgraded Renault power unit, with Kvyat’s sister car powered by the standard motor. The signs of progress for Renault Sport were not encouraging as Kvyat proved faster, seventh quickest to Ricciardo’s ninth. With the same wing settings Kvyat was marginally faster through the speed traps and set a quicker time in the grunt-demanding final sector. Ricciardo confirmed that he could feel no benefit in the car. Kvyat reckoned his final qualifying lap was the best he’s done all season.

16) Simulation suggested that two-stopping would be narrowly faster than three – but on the edge of feasibility. Degradation and wear of the right-rear was the limitation of both the soft and medium. The latter, though initially one second slower, looked to be the better race tyre, its degradation rate 0.1s per lap less than the soft’s and with double the expected wear life. Remaining on what looked likely to be the better two-stop strategy was going to involve running less than flat out in the early stages at least and knowing how many laps the less durable tyre (the soft) would do.

17) Unfortunately, during the race, with the cars arranged approximately in speed order already, they simply spread themselves further apart from each other, with no safety car or other interruptions to mix them up, everyone trying to maximise the stint lengths by looking after the tyres. Rosberg eased out of Hamilton’s DRS range, the two Mercs pulled themselves steadily clear of the Ferrari pair – and so on down the field.

18) Rosberg pitted for the first time from a 1.6s lead on the 13th lap, Vettel following him in. The Mercedes had to be held as the Ferrari came past, delaying Rosberg by around 1.5s. Had Hamilton still had plenty of tyre life at this point, he may have been able to pounce on Nico’s misfortune as he made his way in a lap later. But he didn’t.

19) Rosberg covered Hamilton off when he did mount a challenge. This was when Hamilton despaired and asked for an alternative strategy. Maybe he could eke out this middle stint, suggested his engineer. Had they remained on a two-stop, Hamilton would likely have tried this – getting himself out of sequence with Rosberg, coming in later for fresh tyres and using those to launch his attack in the final stint. This would still be permitted under the terms of the Mercedes internal policy – they’d each still be on the same strategy, just with stretched-out stop timings. Hamilton dropped away from the back of the leader, losing 0.8s of pace on the 25th lap, dropping well out of DRS range, a little further away each lap.

20) But ultimately it was Ferrari who foiled Hamilton’s ploy. How so? It decided to switch Vettel from a two-stop to a three. For no other reason than it was a no-risk alternative. The two-stop wasn’t getting him any closer to the Mercs, so let’s throw the dice. There was no-one close enough behind to threaten Seb’s second place – only notionally in the form of Räikkönen, who remained on a two-stop. Vettel was brought in at the end of the 32nd lap and fitted with a set of new soft tyres. As soon as Ferrari did that, it allowed Mercedes to do the same. With the track temperature still at that awkward level as the sun beat down, it wasn’t totally clear that the mediums would do the stint length required. So, to prevent themselves being vulnerable to Vettel, Mercedes decided to cover him – with both cars, as to do otherwise would be splitting the strategies between Rosberg and Hamilton, guaranteeing one unhappy driver.

21) So if they’d not switched to the three-stop, could Hamilton’s ploy have worked? It seems unlikely in hindsight. The rear tyres that came off Hamilton’s car at the second stops were considerably more worn than Rosberg’s. He’d almost certainly have lost too much time therefore late in that middle stint – and would then have needed to work the final set hard to get back onto Rosberg’s tail. All the evidence suggests Rosberg had this one covered regardless of strategy.