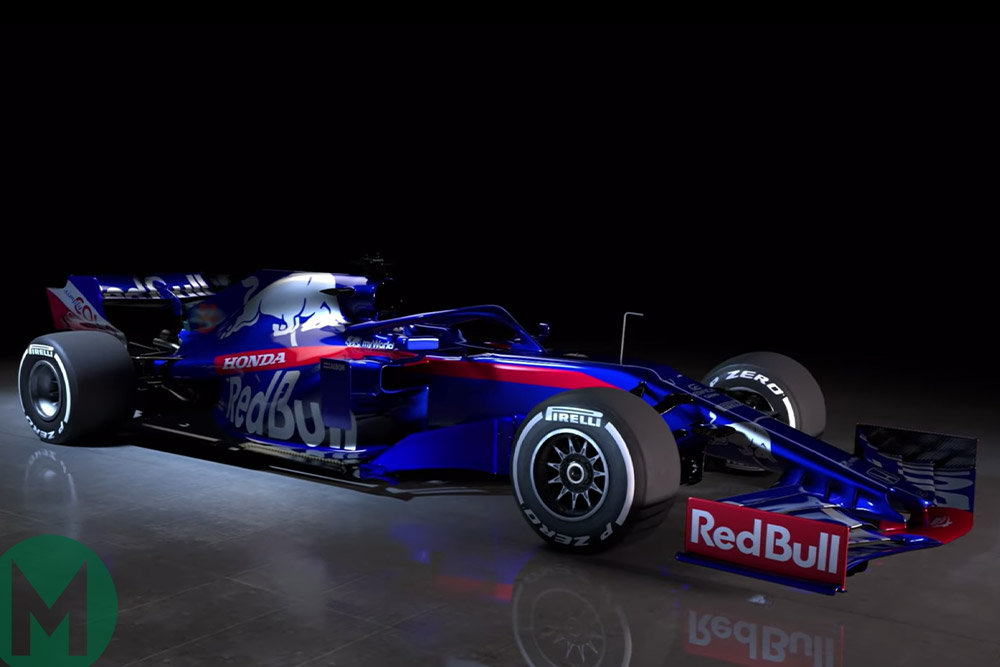 Haas revealed its 2019 livery in London last Thursday which was accompanied by a render of its ’19 car being released online, and this was followed by Toro Rosso revealing its car for the forthcoming season on Monday.

Daniil Kvyat and Alex Albon will drive the STR14 for the 2019 Formula 1 season.

Last season was the Red Bull junior team’s first campaign with Honda power, and while Pierre Gasly finished fourth in Bahrain – equalling the team’s best ever result aside from Sebastian Vettel’s win at Monza in 2008 – the squad compared with the previous year dropped two places in the constructors’ standings to ninth, and its points total also dropped from 53 to 33.

It also entered a wrangle with rival McLaren after the Woking team announced that it had signed Toro Rosso’s highly-rated technical boss James Key.

Updated: Team principal Franz Tost commented on the team’s 2019 preparations in a statement issued on Monday.

“Compared to other teams, Toro Rosso counts on a smaller number of people, but the synergies with Red Bull technology for the non-listed parts, now that Aston Martin Red Bull Racing will also be equipped with the Honda engine, will leave more time for our technical working groups to focus more on the details” said Tost.

“We can now count approximately 400 people, split between the factories in Faenza and Bicester (300/100). The Synergies project [working with Red Bull] will allow us to aim for a step in performance without increasing the number of people; we will buy some parts and have more minds and hands to design and produce all the others.”

“Components relative to the power unit will be the same specification as Aston Martin Red Bull Racing, to be used within the regulations,” explained Tost.

“Most of the remaining parts we receive from Red Bull Technology will be last year’s specifications. Scuderia Toro Rosso, being a smaller team, could not follow the fast development and production process a bigger team can afford, especially considering that the release of the technical drawing could, for whatever reason, be delayed or delivered last minute.”

Toro Rosso also has an all-new driving line-up for this season, as Kvyat returns from a Ferrari development role for his third spell at the team having previously driven there in 2014 as well as in ’16 and ‘17, while Formula 2 graduate Alexander Albon makes his F1 debut with the team, having been released from a Nissan Formula E contract to take the role.

Of its 2018 drivers, Gasly has been ‘promoted’ to the main Red Bull squad while Brendon Hartley has been dropped.

It was confirmed recently that Hartley will take up a simulator role at the Ferrari F1 team in 2019 and compete in the next two World Endurance Championship LMP1 rounds for SMP Racing.